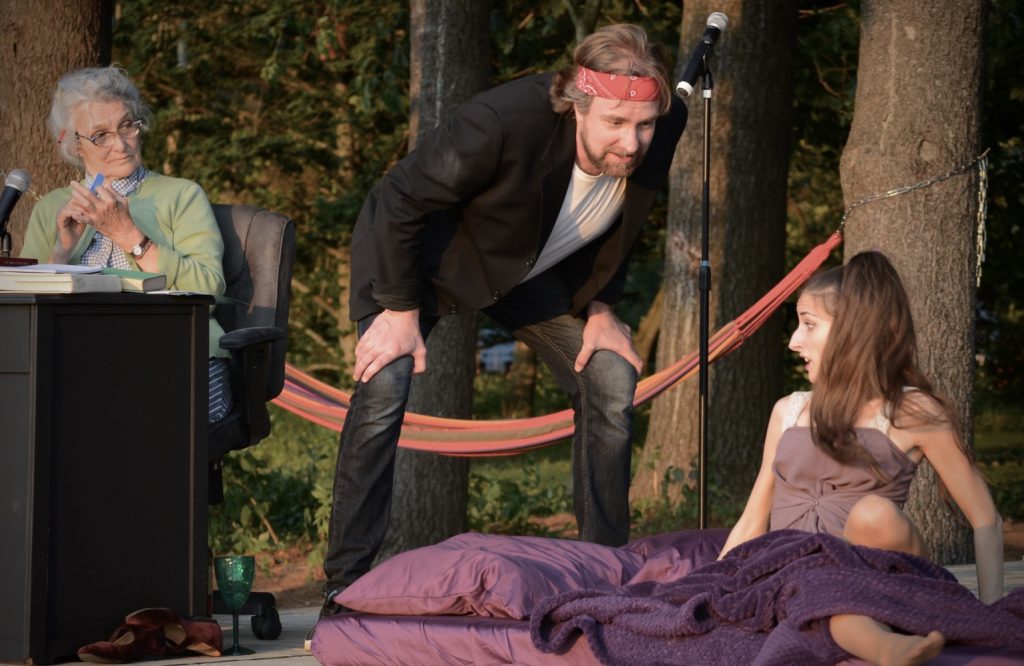 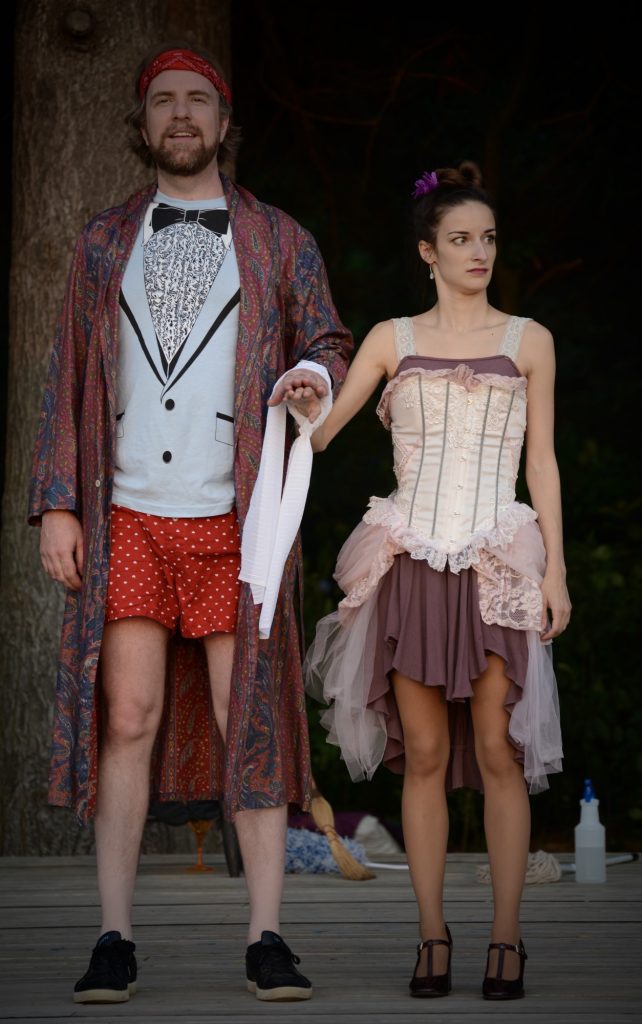 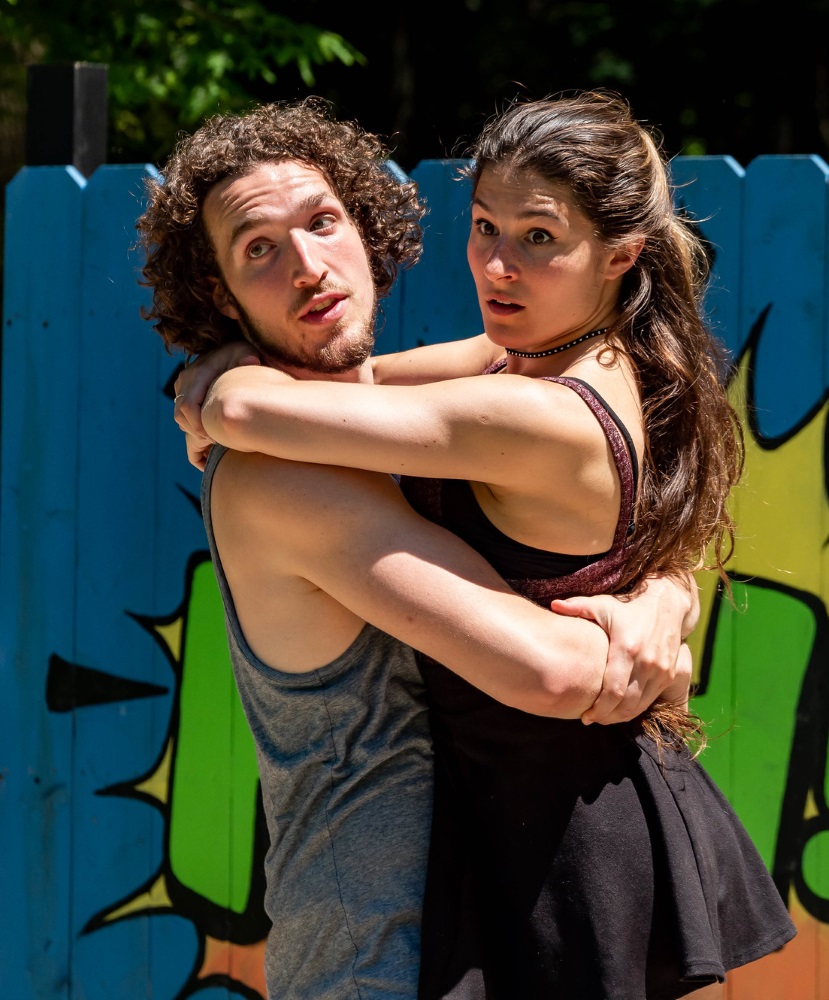 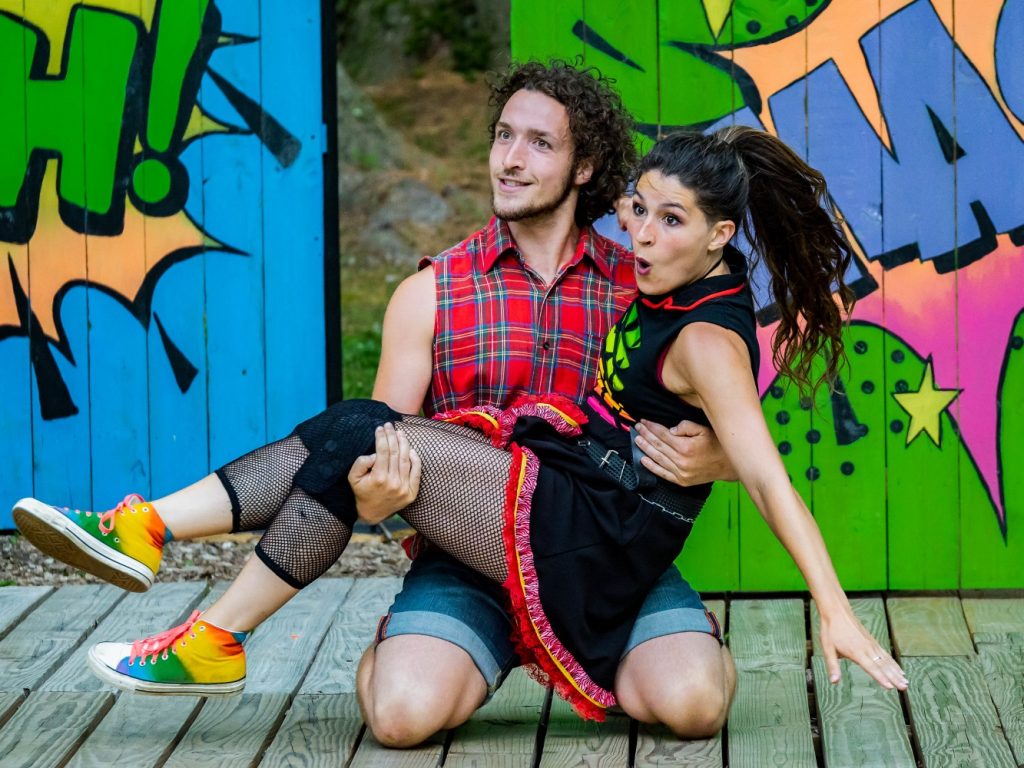 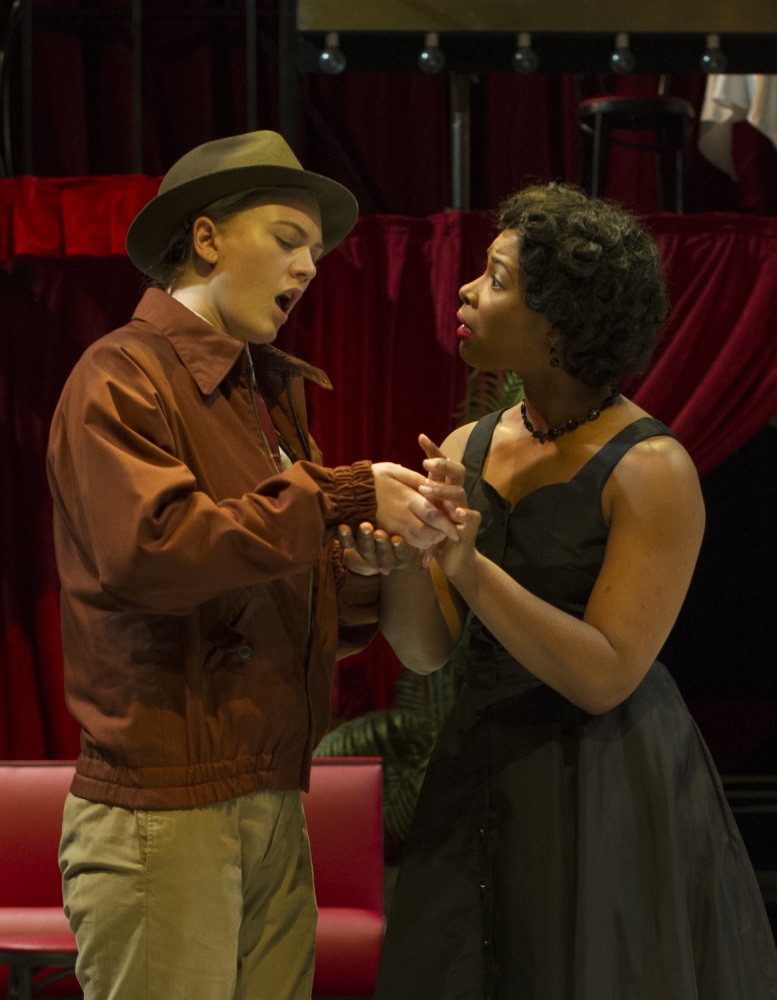 The Taming of the Shrew is Shakespeare’s trickiest play to perform these days – a thoroughly misogynistic tale in which daughters are auctioned to the highest bidder and the “shrew” of the title is “tamed” by a cunning fortune hunter.

He (of course, he) is Petruchio, who comes to Padua “to wive it wealthily” and takes up the beauteous Katherina, who has driven away countless would-be suitors with her “shrewd” tongue and feisty spirit, to the despair of her rich father, who won’t let his docile younger daughter marry till her sister is matched.

So it’s perhaps surprising to find two current productions in the area – or maybe it’s quite apt, as the #MeToo era invites challenges to the still-entrenched patriarchy. Each takes a different approach to solving the Shrew problem.

In Amherst this week, the adventurous Hampshire Shakespeare Company follows up its condensed Henry V with The *Annotated* Taming, or, Out of the Saddle, into the Dirt, an original adaptation by Toby Vera Bercovici that takes the play’s shameless theme to extremes. The subtitle is a line from Shakespeare describing Katherina’s undignified tumble from horseback, and by extension, her humiliation under Petruchio’s “taming” regime of domination and deprivation.

The annotation is handled by a bespectacled Librarian (Linda Putnam) who interrupts the action with footnotes – explaining antiquated words, puns and allusions, along with side-comments on “our esteemed Adaptor” herself. It’s kind of an onstage SparkNotes, but feels like a distancing mechanism, intended to keep us from giving ourselves over to Shakespeare’s rough-and-tumble romcom, since Bercovici’s version is itself a stern commentary on the text. Her intent, as she says in a program note (also annotated), is to create “a strong feminist counter-narrative” to the play in a way that “illuminates rather than glorifies.” 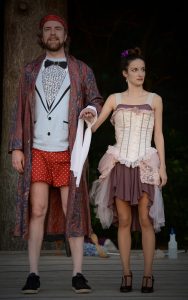 At the outset, four “female leaders,” delivering stirring speeches originally assigned to Shakespearean males, are subdued by four men who borrow Oberon’s magic tincture from A Midsummer Night’s Dream to make the women “madly think their lives before this moment but a dream,” and mew them up in isolated squares of floor space. From these cells the women persistently emerge to grab microphones and perform defiant alt-rock songs written for the production by the duo Old Flame, Emma Ayers and Sam Perry.

Katherina and Bianca (Emily Tanch and Manda Jacobi) have two sisters in spirit. Erin Fitzgerald is the Widow, who’s an afterthought in Shakespeare but here has a stand-up act excoriating men. Moe McElligot plays ten servants at once, which the Librarian believes must be a statement by the Adaptor, “but I am not sure what that statement is.”

Bercovici is an insistently inventive auteur whose encounters with classic texts are consistently compelling. In her adaptation, rife with playful anachronism and performed by her vigorous cast in thrift-store garb, she pairs willful women with beer-swilling louts, then makes an unusual swerve.

Tanch is a surprisingly un-shrewish Katherina whose only “fault” is independence and whose gradual alteration under Petruchio’s harsh tutelage suggests a marital version of Stockholm syndrome. Tom Dahl’s Petruchio is a sure-enough bully, a strutting, self-regarding autocrat, but his performance is unnecessarily over the top, as loud and hammy as Tanch’s is nuanced and poignant.

At Shakespeare & Company in Lenox (through Aug. 14), Kelly Galvin attacks the Shrew problem from a different angle. Here it’s a contest of equals who enjoy a good scrap and where a quick-witted Kate tames the tamer with a combination of cheek, accommodation and sarcasm. 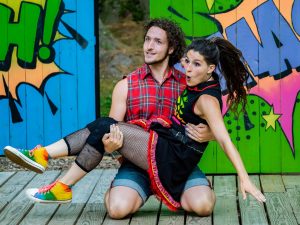 The production was created for a cast of six and performed in high schools throughout the Northeast in the company’s annual spring tour. Now the troupe numbers a dozen lively young professionals who present it in the wooded Dell at the Mount, the former estate of novelist Edith Wharton. Reflecting its original audience and its current outdoor, family-friendly setting, the performance is big and bright, the actors in colorful motley and the stage affixed with placards that illustrate the combative theme in splashes of comic-book art: “Ker-Pow!!”

In her own program note, Galvin talks about the “rules” governing the world of the play, which apply differently to different people according to class, gender and wealth. Petruchio and Kate are both rule-breakers, and treat their contentious courtship as a game with its own rules – those of improvisation. Instead of thrust and counter-thrust, Kate ultimately adopts improv’s “Yes, and…” approach – a shrewd feint and parry that puts Petruchio off-balance and makes for a level playing field. Kirsten Peacock and Nick Nudler are terrific in these roles, nicely mixing repartee with slapstick.

Another Shakespearean comedy is playing up the road on S&Co’s main campus (through Aug. 4). Allyn Burrows’ production of Twelfth Night is an odd one, in which flashes of wit contend with incongruous choices. 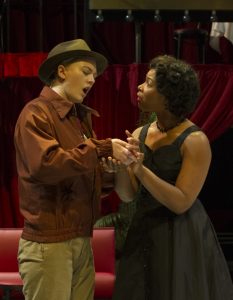 Burrows has set his version in 1959, on the cusp of the Sixties, when the prevailing social and political rules were about to crash. Which effectively captures the play’s spirit of pent-up longing and protective disguise, but doesn’t explain the setting, a seaside dance hall (designed and lit by Cristina Todesco and Deb Sullivan, respectively), since the core of the piece involves intimate exchanges in private interiors.

There’s little consistency of style, either, as subtlety vies with stridency. Ella Loudon’s disguised Viola brings an artless tenacity to her male masquerade, while Cloteal L. Horne’s worldly Olivia is rash and brassy. As Orsino, beloved of Viola while pining for Olivia, Bryce Michael Wood is such a preening poseur that there’s no reason for the one to fall for him and plenty for the other to despise him.

The below-stairs gang of drunkards and fools are amusing but not terribly original. I did admire Gregory Boover as a hip Feste the clown, and puzzled over Nigel Gore’s Sir Andrew Aguecheek, unaccountably Australian but without the distinctive accent. The company’s longtime dedication to “color-blind” casting – and comedic suspensions of disbelief – is proven here with (black) Deaon Griffin-Pressley as (white) Viola’s identical-twin brother.