Stagestruck: All the Livelong Eons 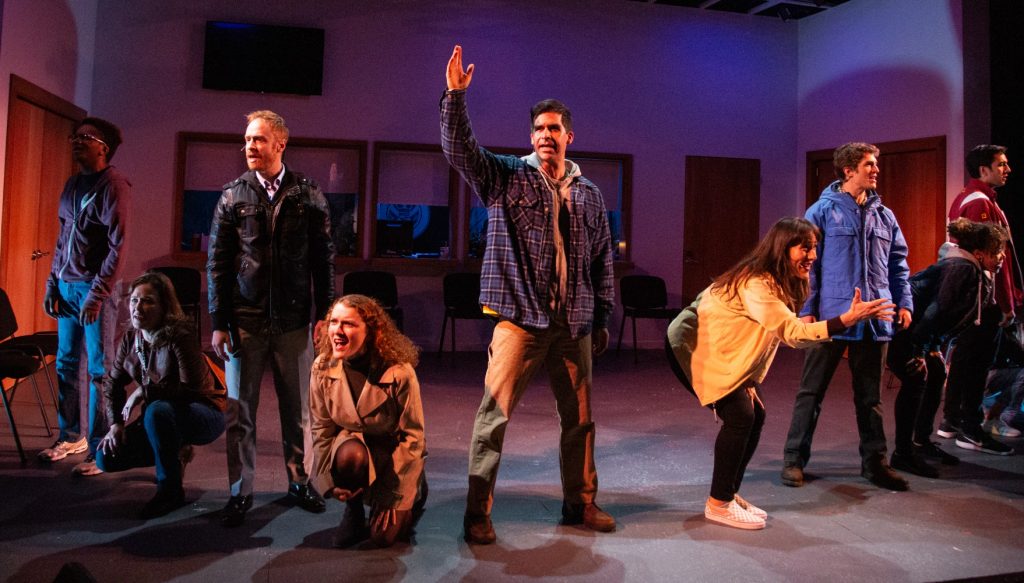 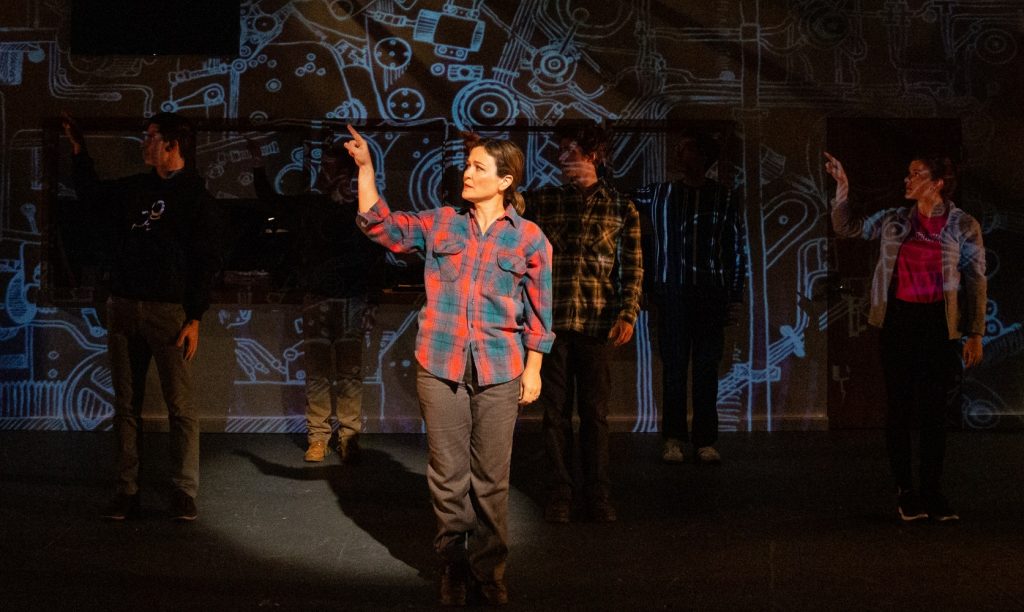 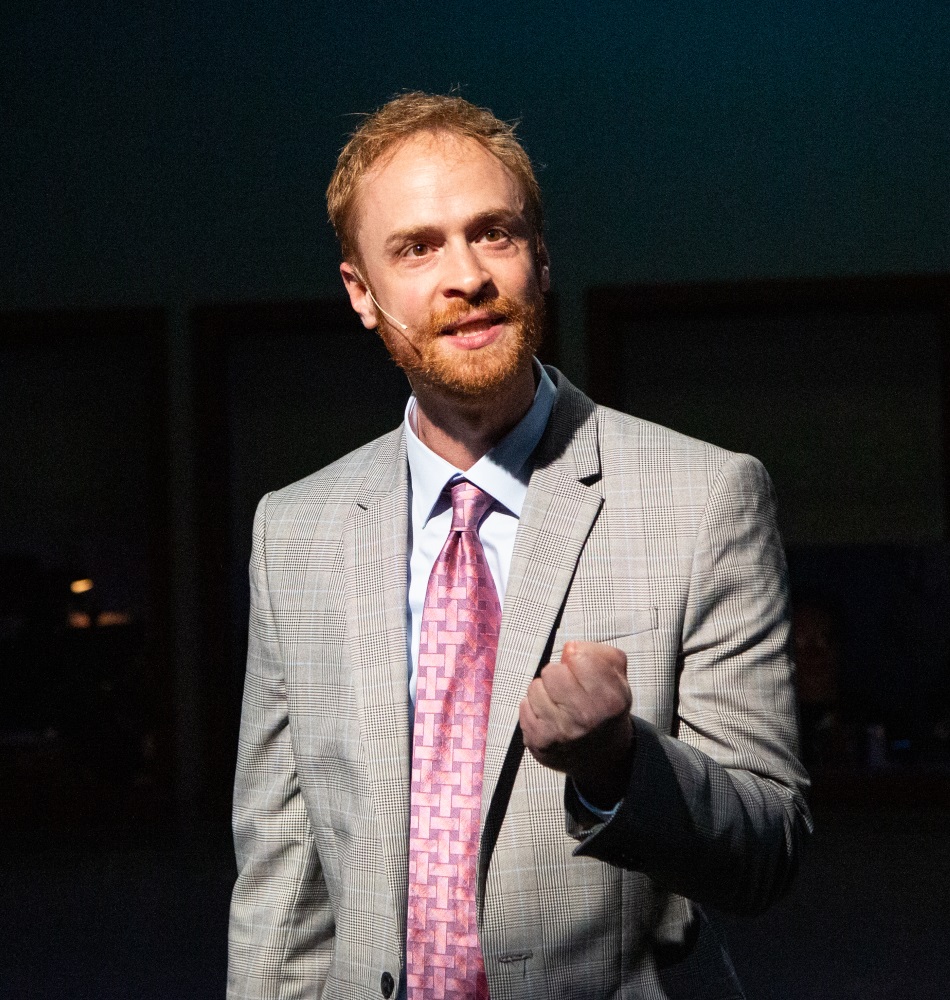 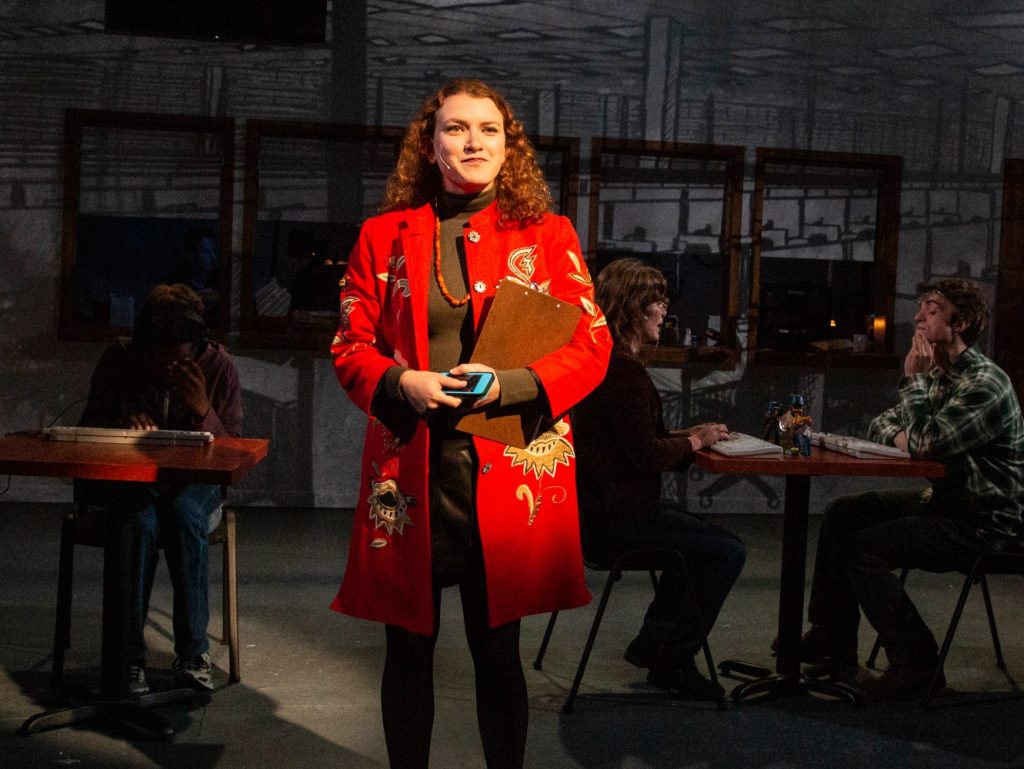 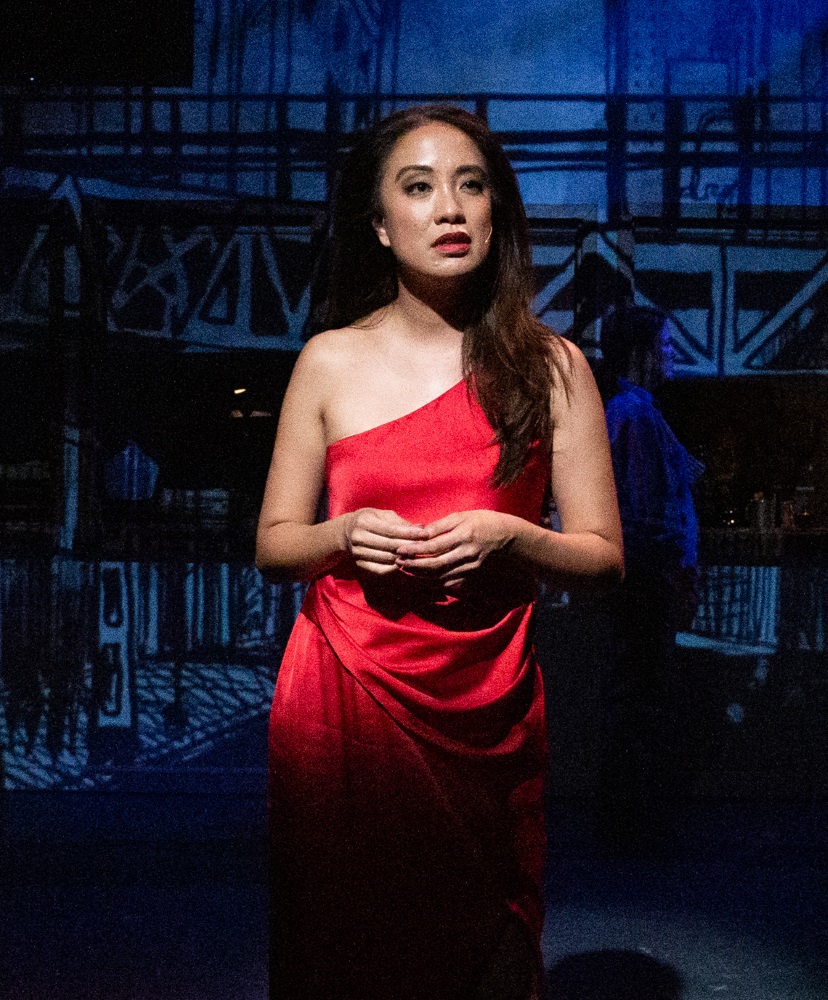 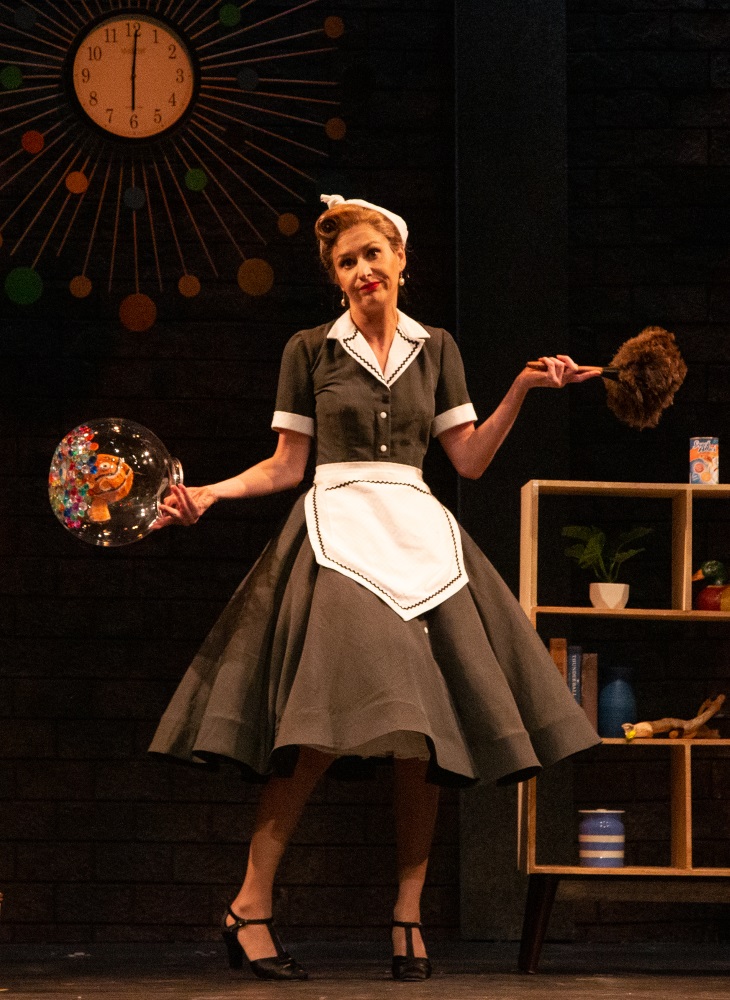 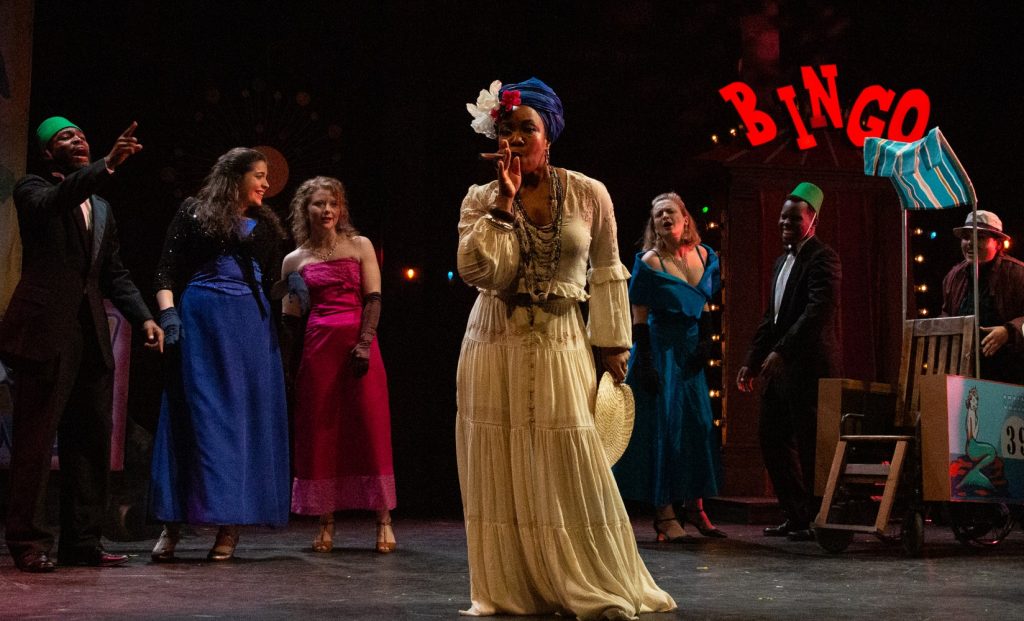 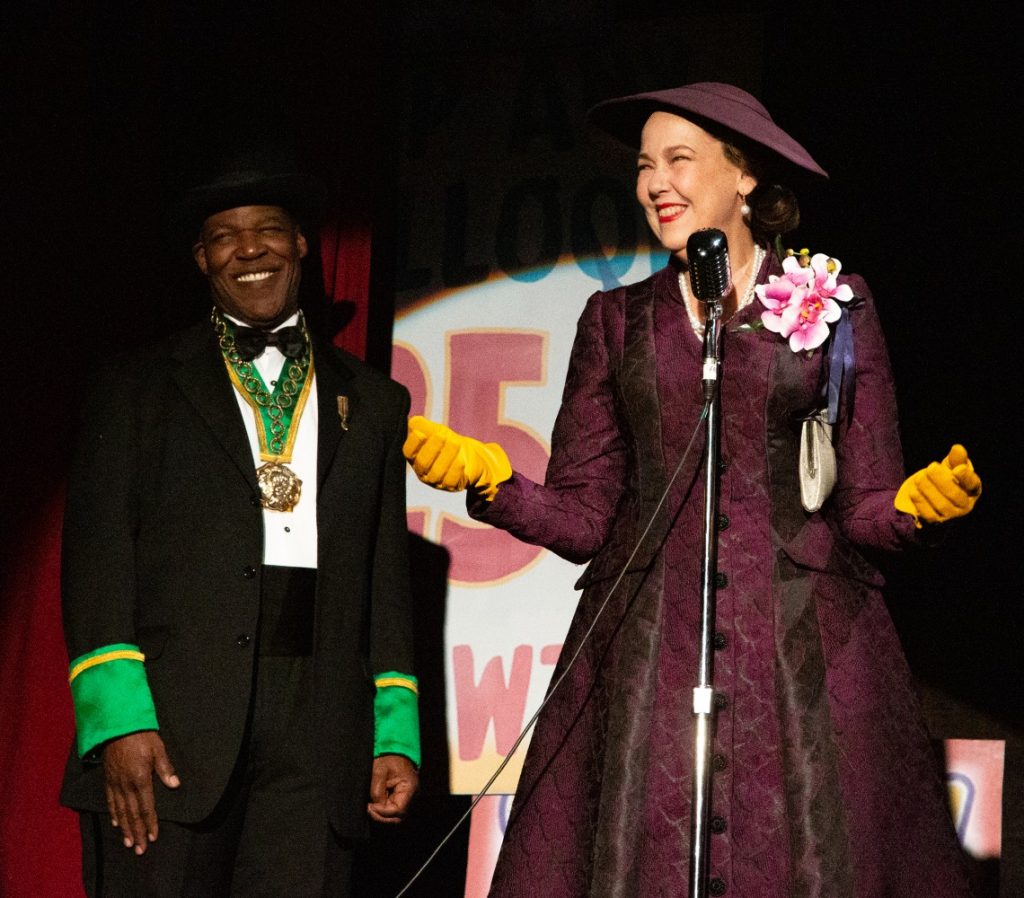 Two shows now playing on the Berkshire Theatre Group’s Stockbridge stages look at who we are as humans. One goes up close to delve into folks’ working lives, the other takes a long view – very long, from the dawn of time to the day after tomorrow.

Working, subtitled “People Talk About What They Do All Day and How They Feel About What They Do,” is a 600-page book consisting of over 100 interviews conducted in the 1970s by the journalist and broadcaster Studs Terkel.

Working, subtitled “A Musical,” is a 90-minute theater piece consisting of over two dozen monologues and songs based on Terkel’s classic. They bring his subjects to vibrant life in their own words, with musical numbers inspired by them, contributed by several songwriters including James Taylor and Lin-Manuel Miranda. The production now playing in BTG’s Unicorn Theatre (through August 24) is smart, buoyant, inspiring and thoroughly enjoyable. 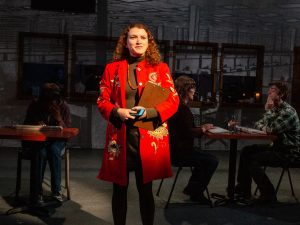 This version, adapted by Stephen Schwartz and Nina Faso from their 1974 Broadway production, premiered Off-Broadway in 2012. Six songs from the original were cut, and two by Miranda added. It updates things a little, while at the same time underlining how work life doesn’t really change. The vignettes flow together, as characters interact and bounce off each other’s stories. While the mood is often celebratory and occasionally satirical, there’s an ongoing sense that work can be both fulfilling and frustrating, enjoyable and grueling, sometimes all at once.

BTG’s production, energetically directed by James Barry, fields an electrifying cast of young professionals who attack the material – and Ashley DeLane Burger’s exuberant choreography – with feeling and panache, accompanied by a live four-piece combo. The performers, 12 distinct talents who work together as a smooth ensemble, portray multiple characters in all kinds of jobs, from the shop floor to the executive suite. 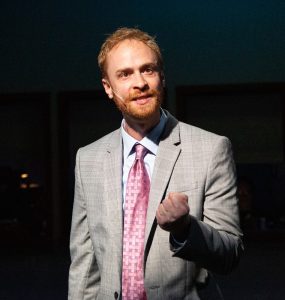 Some of those contrasts are given juice when performed by the same actor, such as Rob Morrison, who’s first a Wall Street money manager whose heroes are the 19th-century Robber Barons, then a mason, proud of his craft and its enduring quality: “Nothing in this world lasts forever, but with stone you’re getting awful close.”

Katie Birenboim plays a bored and unappreciated office worker (“Jobs aren’t big enough for people”) and a waitress delighted with her job, for whom “It’s an Art.” Miles Wilkie is a retired fireman who stays busy by hanging out at fires, where he meets up with Denis Lambert as a current firefighter who finds excitement and worth in his dangerous, life-saving work. Lambert is also an ironworker who revels in being on top of the world on high steel, and a union organizer who fights the street-level battles for workers’ rights.

Tim Jones is James Taylor’s big-rig “Brother Trucker,” and Deven Kolluri is Lin-Manuel Miranda’s manic “Delivery” man for a certain burger chain. Kolluri also plays an Indian tech-support worker, then an unemployed 19-year-old who’s been fired from his job for standing up to the boss and capitalism in general. 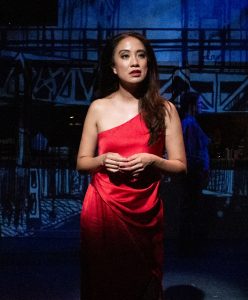 Two hustlers’ experiences are counterpointed: Farah Alvin’s sleek socialite hustling for donations to pet charities, and Jaygee Macapugay’s prostitute who sees her job as little different from working on an assembly line. Julie Foldesi, working on an assembly line, gives a pissed-off edge to another James Taylor song – “Millwork ain’t easy, millwork ain’t hard, millwork most often is a goddamn awful boring job” – as her coworkers go through the numbingly repetitive motions.

Erica Dorfler leads a squad of “Cleanin’ Women,” mopping floors while dreaming of better things for her daughter. And in the show’s most poignant moment, we meet two foreign-born workers caring for others, doing “what no one else will do” – Macapugay a nanny for the children of careless parents, and Kolluri an elder-care nurse for a man with dementia – and making sure their charges have “A Very Good Day.”

Nicholas Hussong’s set, backed by chalk-drawn projections, makes a point of its own: It’s an unemployment office, where the cast sits beneath an electronic board waiting for their numbers to be called.

The show opens and closes with full-cast numbers that reflect its overall themes. “All the Livelong Day” salutes all the workers in their varied jobs with lyrics based on Walt Whitman’s “I Hear America Singing,” and finally, looking up at a building they helped construct or now work in, they see it, and their accomplishments, as “Something to Point To.”

Also at BTG is The Skin of Our Teeth, Thornton Wilder’s comical/satirical/metaphysical romp through humanity’s rise and fall, from prehistory to the near future. It’s running on the Fitzpatrick mainstage through August 3rd.

The sprawling allegorical epic, written during World War II, is as different as can be from Our Town, Wilder’s masterpiece, but just as stylistically revolutionary. It’s a big, boisterous play with a large cast (10 actors play 20 roles, plus extras) and a lot on its mind. Wilder wrote it as a whimsical, sardonic tribute to the indomitable human spirit that was supposed to get us through the war. 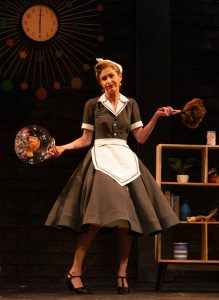 It pretends to be the story of a typical New Jersey family, the Antrobuses – except that Act One takes place in the Stone Age, their pets are a dinosaur and a mammoth, and their son (now called Henry, formerly Cain) is troubled by the guilt of having slain his brother. In other words, the Antrobuses are both the Typical Family and the Original Family.

Leaping over epochs and genres, the play frames human history in three head-spinning snapshots: the Antrobuses defending their suburban home as the Ice Age encroaches; attending a convention in Atlantic City on the eve of the Flood; and emerging into a post-Armageddon world where the line between life and drama is exploded.

Wilder not only toys with time and history, but monkeys with theatrical conventions. The family’s maid, Sabina (Ariana Venturi), starts the proceedings by breaking the fourth wall to address the audience, then breaks character to give us her (low) opinion of the play. The playwright keeps us similarly off balance throughout. Act Two takes place at a seaside convention of the Fraternal Order of Mammals, where a boardwalk fortune teller (Lynnette R. Freeman) assures us that the past is trickier to predict than the present. In Act Three, the family emerges from the rubble of war and the plot takes another tradition-smashing twist. 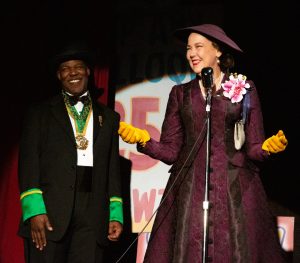 Like the play itself, David Auburn’s production leaps about among moods and styles. Act One is played like a spoof of a Fifties sitcom and Act Two like a vaudeville show, both of them marked (and marred) by outrageous overacting. That’s particularly true of Danny Johnson, who plays Mr. Antrobus not as the script’s genial father-knows-best patriarch and hard-working entrepreneur (he’s busy inventing the alphabet, mathematics and the wheel) but as a volatile bully who uses size and volume to keep the family in line. By contrast, the ever-wonderful Harriet Harris, as Mrs. A, strikes a perfect balance between the supportive spouse and the tigress determined to claw her way through history’s disasters. Marcus Gladney Jr. is appropriately moody and rebellious as the haunted son, and Claire Saunders keeps pace as his bratty teenage sister. 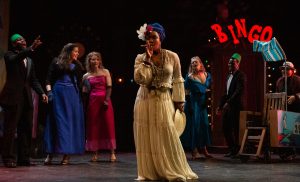 During the first intermission (there are two) I overheard an elderly patron exclaim, “I don’t know what is going on!” but then, filing out after the curtain call, the same woman was saying to her companion, “That was wonderful!”

The turnabout, I think, was due to the third act’s shift into naturalism and the revelation that the actors were not themselves cringe-worthy, as Johnson and Gladney, in particular, gave their characters depth and dignity. Harris was the only performer whose through-line was consistently credible, and I was disappointed to see Freeman, one of my favorite actors, rather wasted in three broad cameos.

Auburn points up the play’s intended universality with touches like homeless refugees huddling in the cold, but the script itself provides plenty of topical resonance – from Mr. Antrobus as a climate-change denier, dismissing the glacier that’s descending through Connecticut, to Mrs. A dismissing the idea that one of the refugees, a lawgiver named Moses, can save them from the apocalypse: “Judges can’t help us now.”