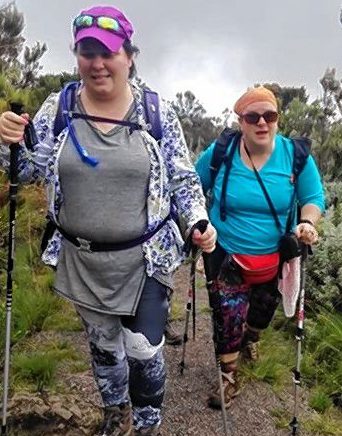 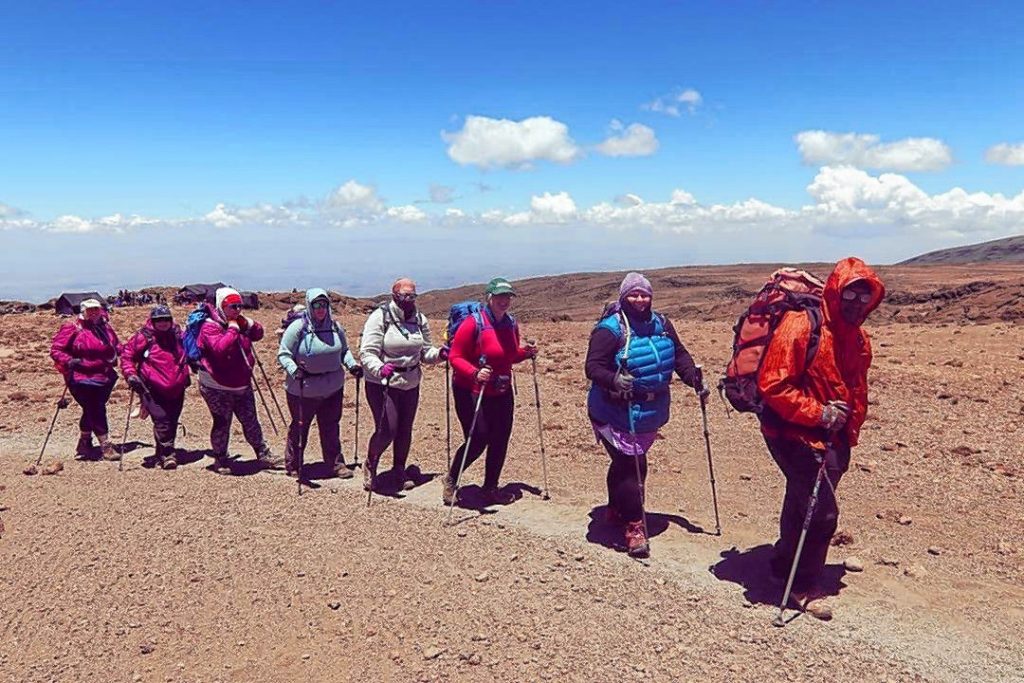 A Franklin County native along with 19 other plus-size women known as the “Curvy Kili Crew” recently hiked one of the largest mountains in the world: Mount Kilimanjaro.

For seven days, Eve Bogdanove of Greenfield and her companions traveled the Rongai Route, an arduous trail along the northern side of the 19,341-foot mountain in Africa. Their journey took them through the region’s rainforest, the alpine desert, and the arctic.

“Some people are really surprised to see large women climbing up a mountain,” said Bogdanove, 50, who owns a psychotherapy practice.

Bogdanove says she was first inspired to climb Mount Kilimanjaro last spring when she noticed an advertisement on Facebook from Christa Singleton, organizer of the Curvy Kili Crew, about the upcoming hike. According to Singleton, the intention of the trip was to bring awareness about the challenges that plus-sized women face when being active outdoors, specifically about the lack of clothing and gear options.

“Many companies don’t make outdoor gear for plus-size people, and when they do their sizing is restrictive,” Singleton said. “Our crew found it really hard to find clothing, especially waterproof rain gear, backpacks, sleeping bags and even leg gaiters. By excluding larger bodies from their product line, these companies are sending the message that fat people don’t belong in the outdoors.”

Previously, Singleton hiked the African mountain in 2016 with Women High On Adventure Travel (WHOA), a company that organizes adventurous trips intended to help women step out of their comfort zones. Being the only plus-sized person on the trip, Singleton says she felt out of place and longed to experience solidarity and camaraderie with women who looked like her. She asked Allison Fleece, a co-founder of WHOA, if the group would sponsor the hike and they agreed.

“The Curvy Kili Crew has taught us a lot about inclusivity and representation in the outdoor space and opened our eyes to ways we can improve our business practices,” Fleece said. “I’m excited for them to show the world that the outdoor space is a place for every single person and it doesn’t have to look a certain way.”

For Bogdanove, who says she grew up dancing, hiking, swimming, and bicycling with her family in Richmond, Virginia, the hike was an opportunity to get back into fitness. In college, she studied dance at Pennsylvania-based Carnegie Mellon Musical Theatre and New York University. She also trained in Goju karate and participated in several women’s martial arts camps, eventually becoming an instructor for first and second graders in Easthampton.

More than a chance to become active again, it was also a way to commemorate turning 50. She signed up, trained for a year and completed the hike this past March.

“Part of our message is that you can climb the tallest freestanding mountain in any body you have as long as you’ve trained and prepared yourself properly,” she said. “We shouldn’t wait until we have a certain kind of body to do anything in this world. As I learned how to say in Swahili, ‘wanawake mafuta ndiyo tunaweza,’ which means ‘fat women, yes we can.’”

While Bogdanove says she’s always been a bigger person, she’s always felt good about her body. And although she’s been active for most of her life, Bogdanove said, “I went through a rough couple of years where I had to prioritize my family and didn’t prioritize being active.”

“I got stuck. My body was feeling achy and cranky. I had to find something to get back into fitness so I can feel better,” she continued. Before signing up for the Kilimanjaro hike, which was more than a year away at the time, “I had not been physically active in any consistent way for seven years. I was really starting from scratch. Slow and steady was my pacing.”

In order to train for the climb, Bogdanove says she walked twice a week for 30 minutes, adding a 10-minute walk on the elliptical to strengthen her joints, 20 minutes in the pool to exercise her cardiovascular system, using the stair master, the treadmill at 15 percent incline, and doing weight training.

“Each week, I felt less winded and stronger. I could feel myself improving,” Bogdanove said. “I would increase the intensity first to build aerobic capacity and then the length of each exercise to build my overall body strength and endurance.” She did a weekly one-hour bike ride with a neighbor each Thursday and went from walking two times a week to three then to six days a week. She even competed in the Greenfield triathlon last August. After that, Bogdanove began hiking every trail on sachem head and poets seat during the week and high ledges in Mt. Toby, Rattlesnake, 7 Sisters, and Mt. Holyoke on the weekends. She was ready for Mount Kilimanjaro.

“It was incredibly supportive and positive,” Bogdanove said. ” It was really fun with lots of jokes and singing. We were encouraging each other along the way.” The Curvy Kili Crew had 11 guides and 75 porters hiking with them, cheering them on to get to the top, be healthy, and enjoy themselves. They were walking on a trail where the incline was as steep as 75 degrees and the ground on the top part of the mountain was covered with tiny pebbles called scree. Bogdanove said there is little oxygen at the summit so they couldn’t stay up there too long. It took them five days to get up to the top and two days to get down.

“It was tremendously wonderful and one of the hardest things I’ve ever done in my life,” said Bogdanove. “I’m really proud of myself for accomplishing this and now I feel that 50 is the beginning of my life.”

The hike with the Curvy Kili Crew was such a success there will be a documentary about the experience in the near future. New York documentarian filmmaker Ida-Rodriguez-Jotlar along with two other camera crew went on the trip and documented all of the women during this whirlwind adventure.

“It was such a privilege to hike this mountain and get to know the crew of women, guides and porters,” says Bogdanove. “And with that privilege comes responsibility to tell the truth of this story. To live in the bodies we have and accept the wealth our bodies have is an act of resisting a culture that says I don’t belong because I’m fat. If I get people to just stop and think about the assumptions they make about people with larger bodies than I feel I’ve done my job.”