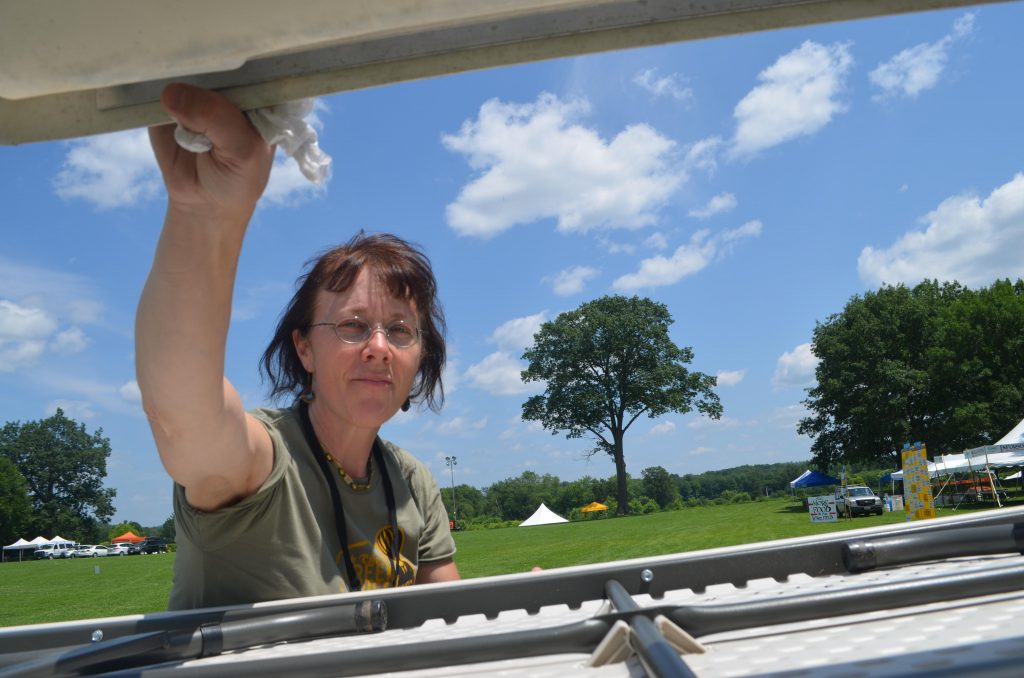 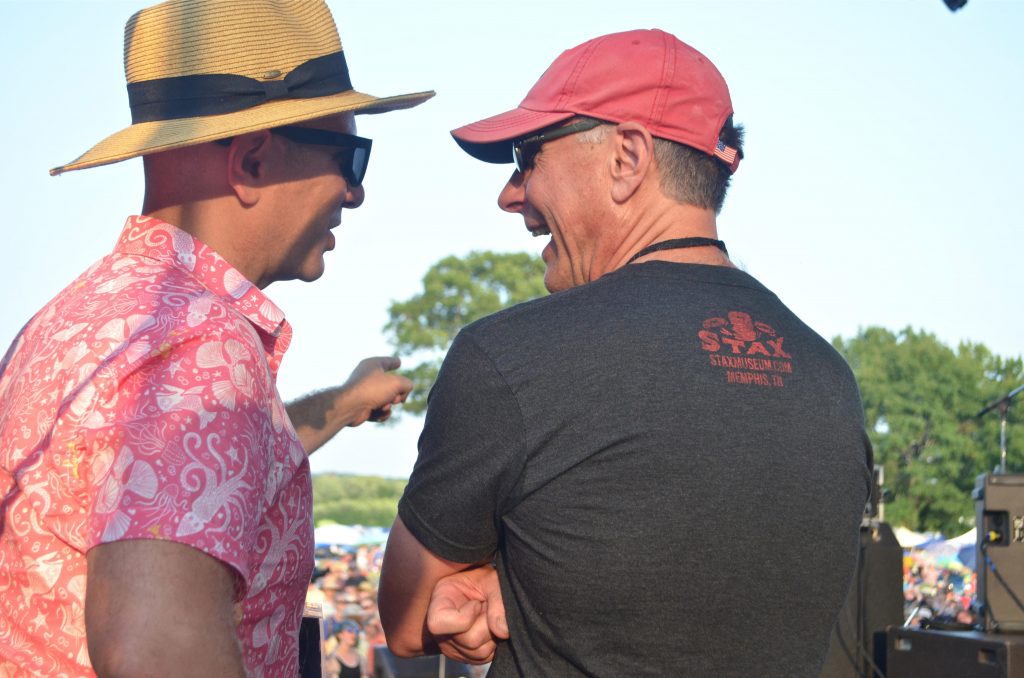 My day job, or rather my MORNING job, is to wake up frightfully early and spend time inside a little box in certain Valley people’s kitchens or cars. I am the morning host at 93.9 The River/WRSI. Back in 1986, WRSI celebrated its fifth birthday party with music from the late-great local hero Ed Vadas, the legendary NRBQ, and the as-of-yet little known 10,000 Maniacs. This event has grown into what we now know as the Green River Festival — the premier musical event of the summer in The Valley, in my humble opinion. And since 2002, I’ve been lucky to be a part of it.

There was a time when the Green River Festival was a dry event. And by “dry,” I mean people would smuggle alcoholic beverages in, Tanglewood-style. Now that the festival has grown, the organizers of the event, Signature Sounds (another outgrowth of WRSI), have teamed up with Valley beverage legends Berkshire Brewing Company to provide beer and wine to the masses. Gone are the days of sneaking into the festival with Jell-O shots and a box of the best cheap wine (La Vielle Ferme!). Or at least those days are mostly gone. Now festival-goers can get a compostable cup of Pumphouse wine, California varietals blended in New York and served from a stainless steel keg for freshness or a classic BBC beer.

But as I was wandering this year’s festival on the sweltering Saturday, overdressed in long pants (because I will NOT wear shorts on stage while introducing bands), I heard a rumor that one of the headliners might be a wine snob. Word had leaked about what they requested on their rider. A “rider” is entertainment speak for “shit an artists requests that they are given for free because they are famous.” I wondered, what do the rock stars at the festival want to drink? I went to the source and asked Lynne Bertrand, artist relations for Signature Sounds and the Green River Festival.

“We mostly fulfilled requests such as ‘1 bottle, red wine, good quality’ or ‘1 red, full bodied, 90+ points,’” Lynne said. Ugh. I’m not a fan of the points system. I’ve mentioned before that 90 is the worst best score, so while there are excellent wines at 90 and especially at 90+ or 90++, a 90 is no guarantee of quality. Also FYI, the label called “90+” can be VERY hit or miss. Think of it as the Pabst Blue Ribbon of wines. Pabst won a blue ribbon in 1893 and they’ve been coasting on that victory for some time. All the 90+ Label wines were rated 90+ at some point but not necessarily this vintage. Could’ve happened back in 1893. So, I hope the artist that requested a 90+ wine is not an artist whom I admire. If it was Rhinnanon Giddens or Angelique Kidjo — two of this year’s headliners — I would be VERY upset.

Lynne has, of course, protected the identities of the people to whom she is providing hospitality but she told me what she could. Or rather, I’m telling you what she told me I could. She says, “Occasionally a rider will call for a varietal but from no particular vineyard. More frequently [they request] the corn ferment known as Tito’s. And about 300 barrels of various tequilas.” But there was one artist from the festival this year who clearly was a wine snob. And it was indeed the artist I had heard a rumor about. Some of the wines they requested: The Prisoner, which is from Napa and is made up of an uncommon blend of Zinfandel and Cabernet Sauvignon with Petite Syrah, Syrah and Charbono. It retails for about $50. But if that request for The Prisoner couldn’t be granted for some reason, get a load of the alternate requests: Abstract Cabernet ($30ish), Groth Cabernet ($65+) or Stags (sic) Leap Cabernet. I intentionally incorrectly wrote “Stags” because the devil is in the details on this one. Or rather, the angel is in the apostrophe. If the artist wants Stags’ Leap (s-apostrophe), you’re looking at around $55. If the artist is looking for Stag’s Leap (apostrophe-s) it could be a $150 wine. Remember this is technically a required GIFT to the artist, whom you are ALREADY PAYING to come play at your festival. Man, I am in the wrong line of work. Other wines requested by this particular artist were more affordable and include selections from Rodney Strong Sauvignon Blanc or Decoy Chardonnay, both between $12-16.

While I may look askance at a rider and the whole philosophy behind it, Lynne looks at it differently. “A rider is, IMO, the single best document to fathom a band’s life on the road,” she says. “Riders can literally be pages long, and can, in the case of hard-touring headliners, be organized by what to buy to restock the tour bus, to outfit the green room, to provide dinner, to make the stars feel at home, to keep the bus driver going thru the night (one can Red Bull!). Or they can be as short as ten items, half of which are variations on the motif of two hydrogen atoms and one oxygen.”

Lynne also says that it isn’t necessary to get ALL the weird wines and whatever requested on the rider. “Festivals, with 40 or 50 artists rolling in in vans and tour buses, cannot possibly fulfill every page of every rider, or promoters would all go broke. We have fantastic catering backstage at Green River Festival, and a lot of artists are happy just to know someone is cooking fresh, healthy food for them. But we have among us, on the GRF staff, certain individuals who cannot resist the search for a Holy Grail.” Lynne was assisted backstage this year by Kathleen Page who helped to track down some of these hard to find items. “This year’s grails were easy gets,” Lynne says, “Artists who demanded scratch tickets, deep-fried Fast Breaks, photographs of certain (ok, naked) movie stars from four decades ago, socks, tanks, a six-pack of straws for vocal warmups, a vibed-out green room, and ‘whatever Dawes got last year.’”

I love the Rock & Roll tale about the late Pete Shelley of The Buzzcocks who had written and underlined on his rider “No Moët, no showy. No Chandon, no band on,” name checking two famous Champagnes. I have no doubt that Lynne Bertrand, Signature Sounds’ special sauce when it comes to hospitality, made all of the artists Champagne wishes and caviar dreams come true. She is truly a magical person who has an otherworldly sense of hospitality and care. But who takes care of Lynne? I asked Lynne what would be on her own personal rider if she had one. “Most of my rider can’t be found on this planet. But I’m in a “Summer of ‘19” search for a bottled sangria that doesn’t taste like Hi-C. I like Hi-C, but it’s cheaper just to buy it in the box. And a Sav-Blanc that invokes predominantly grasslands and gravel mines…” Excuse me while I go and try to fulfill Lynne’s rider.