For 24 continuous hours this past weekend, musicians, theater groups, comedians, jugglers, kirtan singers, yoga enthusiasts, and a long list of other artists in the Pioneer Valley came together to say, “Close the Camps” along the southwest border, where thousands of people seeking asylum continue to be detained in inhumane living conditions.

“413 Says #CloseTheCamps: 24 Hour Performance Fundraiser,” was hosted by local theater group TheatreTruck and the Shea Theater Arts Center in Turners Falls from 8 a.m. Saturday to 8 a.m. on Sunday, with the event raising more than $5,000 for grassroots activists groups such as the Pioneer Valley Workers Center, RAICES Action Network, and Immigrant Families Together.

Earlier this month, I wrote a cover story for the Valley Advocate, “From the Valley to the Border” about local people in the Pioneer Valley and southern Vermont aiding asylum seekers by traveling down to the border. Speaking with the different groups of people willing to personally get involved to help asylum seekers was inspiring, so when TheatreTruck collaborator and singer-songwriter Emma June Ayres asked me to play a 45 minute set at 3 a.m. for the fundraiser, I figured it was the least I could do.

The fundraiser was the brainchild of Ayres and TheatreTruck co-founder/ co-artistic director Brianna Sloane, but many joined in the effort to organize the event, including members of the Shea’s Board of Directors as well as Elizabeth Pangburn, founding member of TheatreTruck. 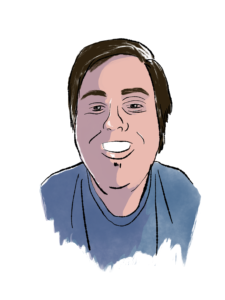 “It was primarily Emma and Brianna; they carried the weight of it,” Pangburn told me in an interview sometime between 4 and 5 a.m. “I think Brianna felt like she needed to do something and we all supported her. And they put it up in just a few weeks. And there was this amazing outpouring of support from our communities. I think a lot of people don’t know how they can help or aren’t qualified to help. If everyone went to the border it would be a disaster, but we can support those doing direct action through events and fundraising like this.”

It was around 2:30 a.m. when I arrived in the lobby of the Shea Theater with my 12-string guitar in hand alongside my wife Anna. When we walked through the front doors of the Shea, singer-songwriter Jameson Martin Kidder was playing a set of mellow folk music while a handful of people sat cross legged on the lobby carpet transfixed.

About half an hour later, I played my own set — original songs ranging from a cappella avant garde pop tunes to 12-string folk-rock music along with a little R&B and doo-wop for good measure. Though the crowd consisted of only a few people, it felt invigorating to be burning the midnight oil for an important cause.

Midway through my set, we had an unexpected 3 a.m. audience member stop by. That person donated $100. It just goes to show that when a community sends out a rallying cry for a cause that’s just, people respond even if it means driving down your local community arts venue in the middle of the night.

After my set, acoustic folk-rap and R&B-inflected artist Miguel Angel Paredes sang from the heart about living in South Africa, being away from his younger brothers, and speaking out about injustices through song. And then Ayres sang a few of her original tunes, before the sun started coming up along Avenue A in Turners Falls and the small group were led in Kirtan song and prayer by Matthew Andrews.

Before heading home to go to sleep, I spoke with Ayres, who had been there since 7 a.m. and left only for an hour to take a shower. I asked her what it was like seeing so many rock bands, artists, performers, and Pioneer Valley residents support the fundraiser.

“This has been such a testament to the care and attention of this community,” she told me around 5 a.m. “I’m really pleased with how everything’s gone.… What I’ve been saying is, ‘Put your art where your mouth is and the money will come,’” she said.

And driving over the Gill-Montague Bridge, knowing that in a few hours there’d be a group continuing the fundraiser with yoga and thinking about the many local artists who made the 24-hour event possible, I couldn’t help but smile. This Valley community really did put it’s art where its mouth is and I’m glad to call it my home.