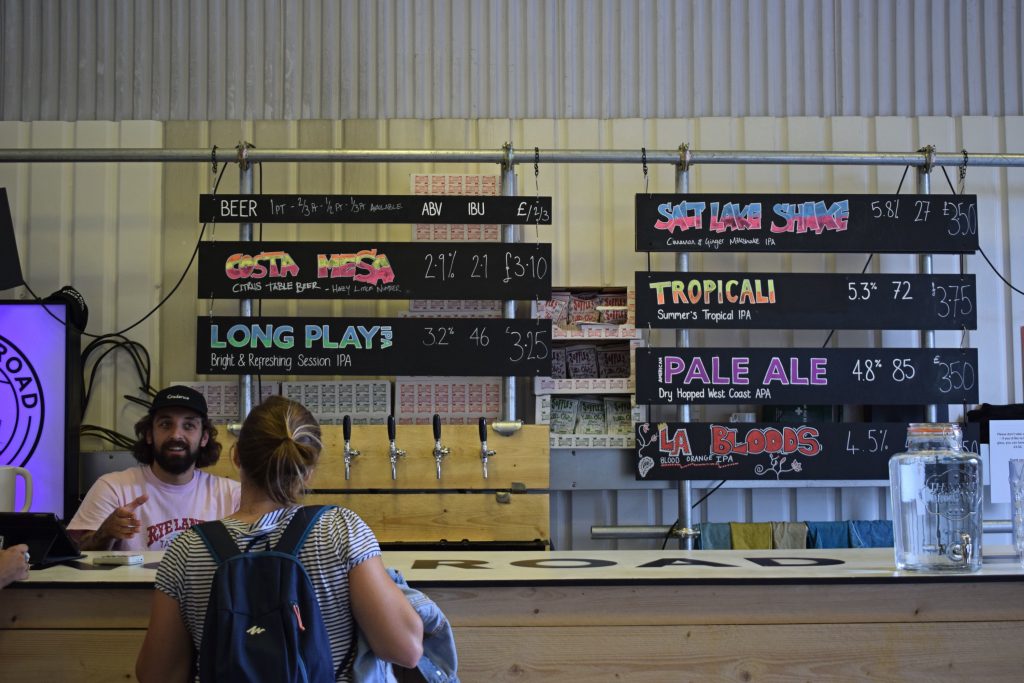 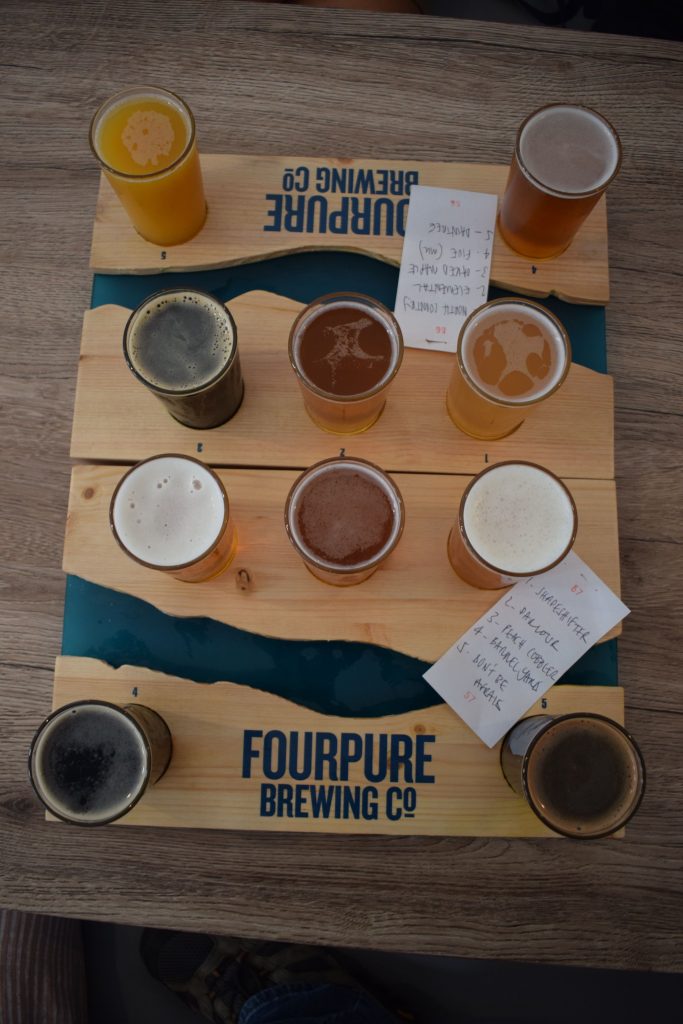 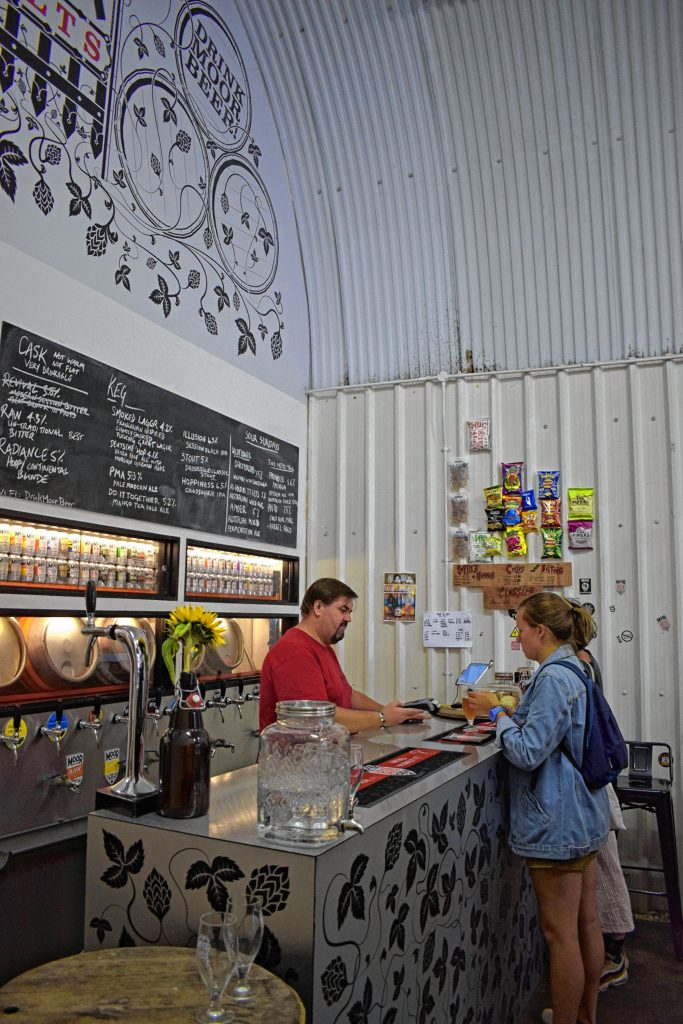 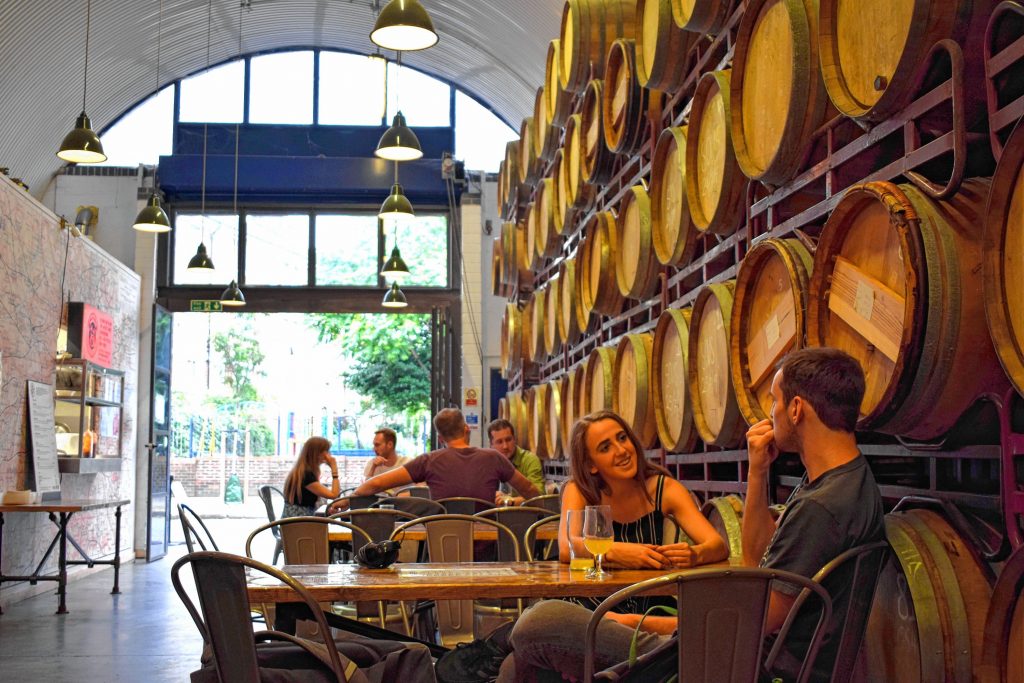 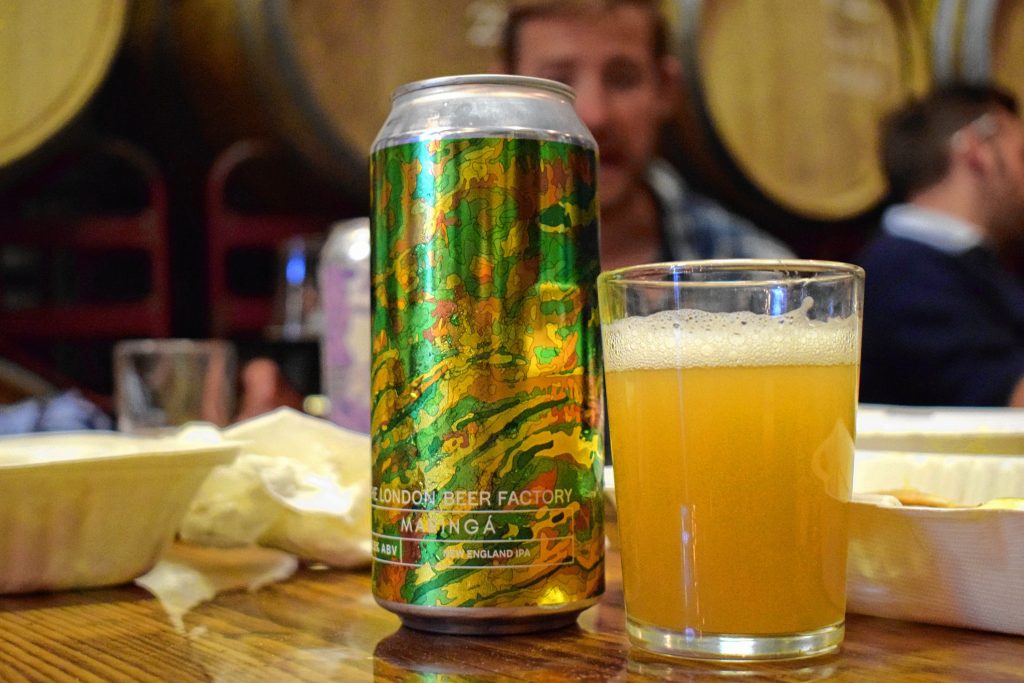 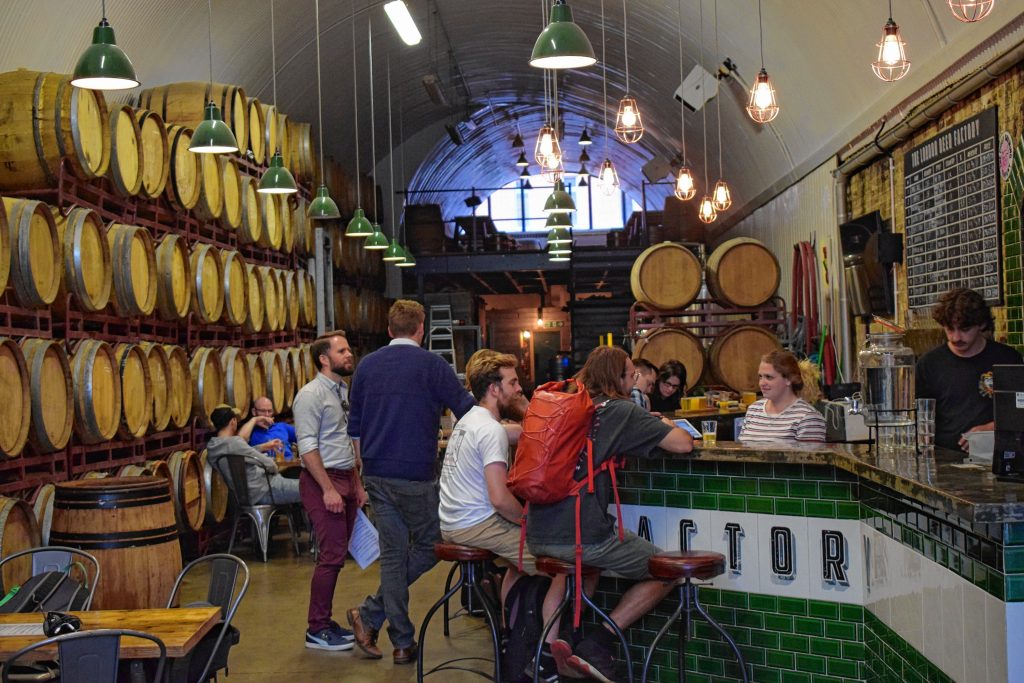 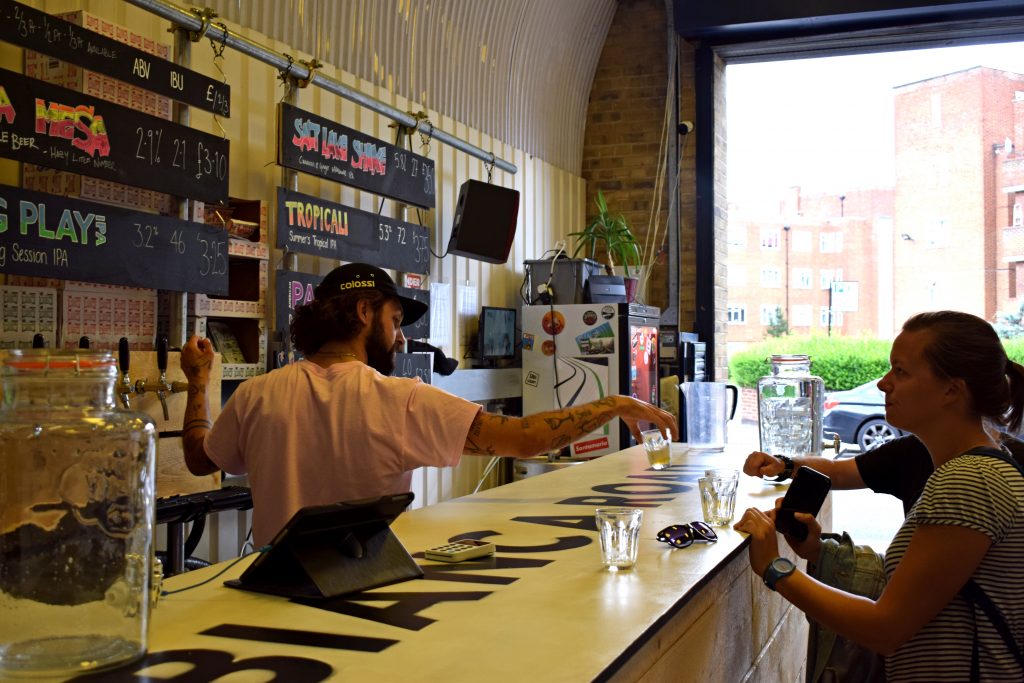 The news is the water we swim in. But what does our modern media do for you each day? What kind of imprint does it leave on you, as you fall asleep at night?

The 24-hour outrage cycle prompts some of us to disengage, numbed by each horrific headline. Others stay furious, seeking out confrontation for better or worse. For me, it depends on the day. What doesn’t go away, though, is an impulse to comfort those who are struggling. And occasionally, if the moment is right, to buy them a beer.

When I’m in the Valley, this feels natural. But as an American living in Europe for a few months, I can’t help but approach new people and conversations in a defensive stance. Sometimes, when chatting, I openly lament the state of the States. Just as often, I find myself defending the humanity of certain disenfranchised sorts who have voted, appallingly, for a political platform that now survives mainly on old, entrenched wealth and the calculated, cynical exploitation of desperate people. 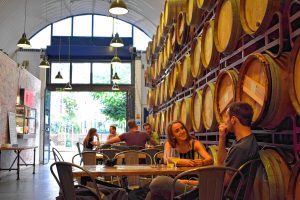 Given the ominous headlines in Britain recently — the quickly-approaching Brexit deadline of October 31, and the appointment of the almost comically manipulative Boris Johnson as Prime Minister late last month — I suspected London would be a good place to commiserate on a deeper level about fake news, bad trade, and the dangers of ahistorical thinking. And, while doing so, to have some really good beer.

I was right on both counts. Last week, I tracked down two good friends living in the South London neighborhood of Brixton. My sister flew in from Italy to meet us. Together, we hit the streets to find some craft beer and good conversation.

Our destination: the Bermondsey Beer Mile, which offers a 30-minute walking tour past 17 taprooms, many of which are built into old railway arches. We spent a good chunk of our weekend there, tasting locally-made beer. With the occasional loud rumble of a train speeding across the stone and steel over our heads, we clinked our glasses in a hearty cheers.

The railway arches along the Bermondsey Beer Mile might
be the best place in London to find low-key, cozy taprooms.

Amid some chatter with locals, I studied the historic architecture over our heads. Although I was sitting beneath an elevated train track in southeast London, I felt right at home, as if teleported from a renovated mill building in New England. This is part of the fun of craft beer: enjoying new things with old friends in even older places. 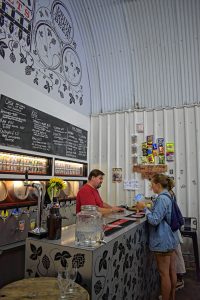 I love London. Home to more than 8 million people, the city has as much excitement and vitality as New York. But London has twice as much land area as NYC, which means half the population density — good news for travelers less keen on grimy, enclosed spaces.

I had five days in London — a short trip, given how much there is to see. For suggestions in advance, I called Western Mass newcomer Michael Batchelor, who was born in England but who now lives in Deerfield. Before he took a job at New City Brewing in Easthampton, Batchelor used to work as a manager for The Craft Beer Company in London, whose several pubs have helped to transform that great city into a world-class craft beer destination in less than a decade.

When Batchelor and his wife moved to our quiet Valley last year, he didn’t know a soul in the local beer community. That sounded like a downshift to me. But Batchelor didn’t see it that way. “The thing I’m most impressed by here,” he told me, “is how easy it is to get good beer now, with the number of taprooms around. People go to a taproom for lunch, bring a dog along, then go for a walk. That’s woven into living here, which I really enjoy. There’s nothing like that back home.”

At first, I didn’t believe him. England’s beer history dates back thousands of years. Soldiers of the Roman Empire became accustomed to Celtic ale while stationed in Britain, basically modeling the pub crawl before the birth of Christ. By the Late Middle Ages in England, a substantial portion of the average person’s caloric intake came from beer. England’s oldest brewery still in business, Shepherd Neame in Kent, opened around 1573, a year in which Shakespeare was (arguably) too young to drink. 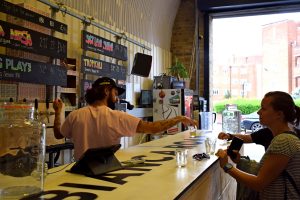 Then I learned more about Batchelor’s hometown of Luton, located about an hour north of London. Although Luton’s population is over 200,000 — more than 12 times the size of Easthampton — Batchelor recalls only a small handful of craft beer taps, and no active craft breweries in Luton at all (from some Googling on my part, that still seems to be the case).

Indeed, the modern craft beer and microbrewery movements that surged through the U.S. over the past several decades have taken much longer to manifest in England. It really wasn’t until the 2010s that an interest in these craft beer trends really exploded in London.

Availability of craft beer in certain bars is also limited by the United Kingdom’s “tied house” system, in which a pub is required to buy a large portion of its beer from a particular brewery, rather than being able to choose its beer menu freely, like a “free house” can.

Exclusive contracts like this were common in the U.S. until Prohibition, after which the system never returned. But it’s alive and well in England. So even though London has a great share of really terrific bars, the best way to try fresh craft beer is often at the breweries themselves.

Indeed, the Bermondsey Beer Mile might be the best place in London to bypass what Batchelor is talking about. It’s along these railway arches that you find the kind of low-key, cozy taprooms that New England craft beer fans love so much. 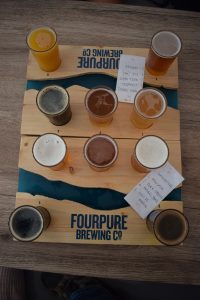 The first spot we visited, Fourpure Brewing Company, was an auspicious start. Founded six years ago by siblings — one of whom was inspired by American styles while traveling the West Coast — Fourpure exemplified the variety of craft beer styles popping up in small and not-so-small batches in London over the past several years.

From the 20 beers on tap, we selected 10, which we sampled in two flights in the brewery’s newly expanded taproom. For an hour we enjoyed the warm summer breeze, which carried the aroma of gourmet hot dogs from a parking lot stall, and enjoyed simple but well-made IPAs and lagers, as well as some creative beers like a lavender and rhubarb Berliner Weisse, a cucumber sour, and a blackcurrant porter.

Although the setting was lovely, I felt like I was hanging out in a taproom in Denver. My sense of being in two places at the same time — which seems common among Americans chasing their own exported craft beer trends abroad — was only reinforced at the next breweries we visited. At Bianca Road Brewing Company, the Tropicali IPA practically made me homesick. I switched to a bizarre-sounding but not-terrible Salt Lake Shake — a cinnamon and ginger milkshake IPA — just to give my confused brain something new to ponder.

The Bermondsey Beer Mile is a place for innovation and experimentation. This meant that our afternoon wasn’t marked by traditional beers like English brown ales, mild ales, bitters, or oatmeal stouts. Those styles, while delicious, can be found throughout the city with almost no effort (a beautiful thing in itself).

Instead, we tried sour cherry IPAs and blueberry lime Berliner Weisse at Brew By Numbers, one in a series of railway arch breweries along a single block. Next door at Cloudwater Brew Company, we sampled a kettle sour and brut IPA blend made with blackcurrants and blackberries, as well as a version made with peach. London Calling Sweden, a taproom and live music space that sells Swedish craft beer rather than brewing on-site, had several good IPAs and pale ales on tap courtesy of Poppels Bryggeri, which is based near Gothenburg. 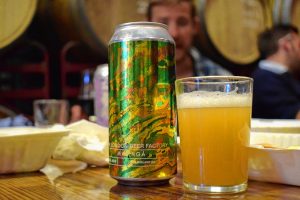 Many of these beers reminded me of home, but it was the local conversations we stumbled into that kept me grounded on English turf. At Moor Beer Company — where the cask beer list on the chalkboard begins with the assurance “Not Warm, Not Flat, Very Drinkable” — we got to talking with some young folks who seemed rather shell-shocked by the ascent of their new prime minister. We took in the sunshine on the patio with glasses of wild ale, snacking together on roast beef-flavored chips — sorry, “crisps” — and discussing the next few unpredictable decades.

This conversation carried us to our final railway arch for the day: The Barrel Project. Opened in 2017, the large craft beer tap room also serves as a barrel-conditioning space for the London Beer Factory. The chance to nestle in with some pub food and beer in the midst of 200 oak barrels was the perfect way to wind down our crawl and absorb some new stories and ideas — and to look back on a successful day of wandering.

London is enormous, and endlessly interesting. If I could stay longer, I’d follow up this dispatch with more stories of how this city melds its rich brewing traditions with the new. For now, however, I’m headed back to the Valley, ready for a fresh look at how New Englanders run with tradition and make it their own.