Walking for a nuclear-free future — for 40 years 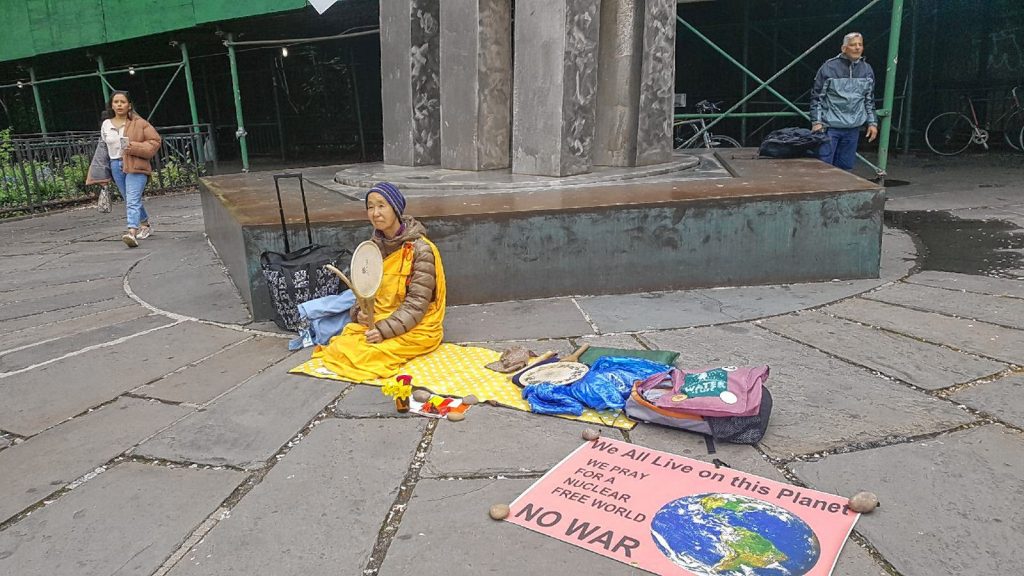 Jun Yasuda, known to many as Jun San, has been actively opposing nuclear weapons and nuclear energy for decades, having walked across the country eight times in protest.

The Advocate spoke to Yasuda while she was participating in a weeklong series of events urging a nuclear-free future, including a walk from downtown Brattleboro to the Vernon site of the recently decommissioned Vermont Yankee nuclear power plant.

Editor’s note: The text has been edited for length and clarity.

Dave Eisenstadter: How did you become involved with anti-nuclear activism. 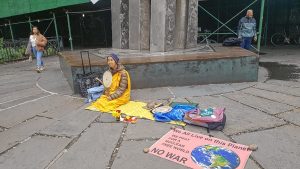 Jun Yasuda: Why do people not care about this situation? Nuclear issues connect all living things. It’s not just one country. It connects all the planet. I am Japanese. I grew up in Japan. So when I was young, I saw the suffering from the nuclear bomb. I am now 70. I was living in Japan until I was 32 or 30 years old and I moved to this country and I thought more about the nuclear situation, more on suffering in this country, too. I connected with many Native people and I was going on peace walks on Native people’s land where there were nuclear testing sites on Shoshone land, nuclear mining sites in south Lakota/Dakota Nation land, nuclear dumping sites in the Seneca nation. There were many different places in the United States where there was nuclear suffering from beginning to end.

Dave: What do you see as the biggest problems with nuclear weapons and nuclear energy?

Jun: If you do a very deep study about radiation, radiation has no solution. Fukushima happened — the nuclear accident — and after nine years, nobody now wants this nuclear waste. People don’t know what to do. And all professional people, they know for 100 years what to do, but after 100 years, they don’t know how to hold (the waste) in a container. And why do people keep creating these things? Containers can only hold it for 100 years or 200 years. After that, there is no container to hold it for thousands of years. Why keep making it? People are not thinking in nuclear waste time. That is a problem.

Dave: Many of your actions are walks. Where have you gone and what are these events like?

Jun: This is our prayer. We go step by step. We have people who come with us — some Christian friends, some Jewish friends, some non-religious friends — these are people that are concerned about what to do for this planet now. Some people are chanting; some people are drumming. I have been drumming. (Shortly) after Fukushima, thousands of people walked with us. Now that it is nine years later, people are not so focused. So somebody has to continue to have the same focus.

I’ve walked across America eight times by foot. I’ve walked to all different nuclear sites like Nevada test sites, California Livermore Laboratory, or a nuclear submarine base in Seattle. I walk everywhere. I talk to local people and listen to local scientists. I’ve walked for 40 years.

Dave: Have you seen changes at the Vermont Yankee power plant site, which was decommissioned in 2014?

Jun: I have been there 100 times. It used to have pretty heavy security and people just holding guns. But now there is no active anything because they are closed down. But that does not show us where to put this nuclear dump. There is no answer. And next to Vermont Yankee is a beautiful river.

Dave: Do you think you are making a difference and changing people’s minds with your actions?

I am not only focused on nuclear issues. I care about people suffering. I walk from prison to prison. Walk from military base to military base. I walk the pipeline walk. Everything is connected. We walk on the border. We walked from a Muslim temple to a Jewish temple to connect everybody. It’s to help take care of everybody, to open up hearts to take care of this beautiful planet.

Dave: What are the obstacles you find in you anti-nuclear advocacy?

Dave: Do you mean sickness in a mental sense or a physical sense?

Also, many media organizations are controlled by large corporations. So it is not always easy to learn what is going on. When you study nuclear issues, it is always the government pointing at other countries, Russia, Iraq, Iran, but in this country — how much nuclear material we have, how much money it is spent — we never talk about our own country’s problems.

Dave: What keeps you going after all of this time speaking out against a nuclear future?

But somehow when I walk in a peace walk, walking to different places, I always meet amazing people, very dedicated to peace. I get more energy from people.