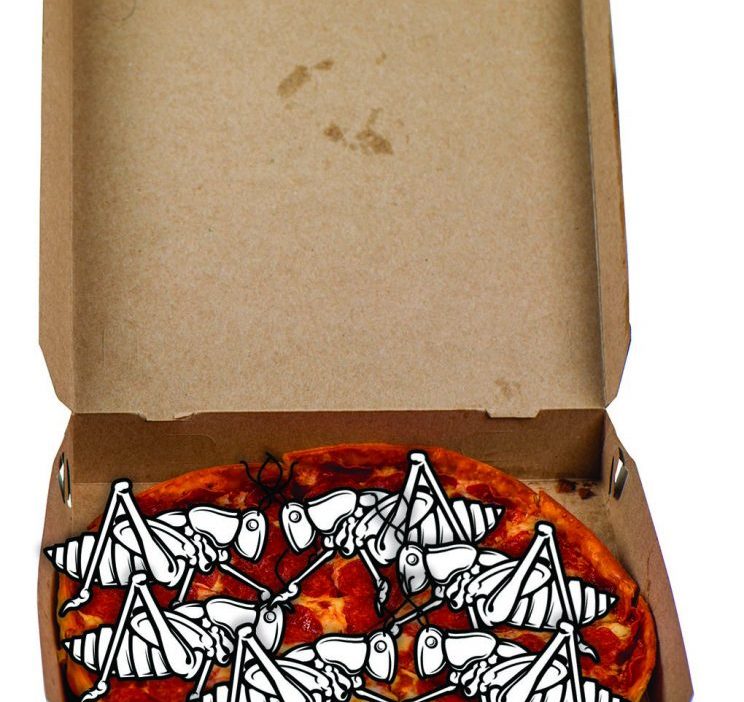 Recently, swarms of grasshoppers have invaded Las Vegas, and videos have been posted of the winged creatures flocking around neon lights. One Las Vegas pizzeria is unfazed by the biblical-level calamity, and is serving the little critters on their slices. Selling at $5.50 a slice, the grasshopper-covered pizza is actually selling quickly, according to the owner of Evel Pie, the pizzeria. The name of the pizza? “The Canyon Hopper.”

In Spain, a man taunted a local police department by posting a video of him dumping a refrigerator into a ravine and calling it “recycling.” Unfortunately for the litterbug, police were able to identify him. In a punishment reminiscent of the Arlo Guthrie song “Alice’s Restaurant,” police fined the man and forced him to return to the ravine and remove the refrigerator by hand. In a follow-up video posted by police, the man and a companion are seen hauling up the appliance. The fine was a bit stiffer than the $50 in the song — he faced having to pay 45,000 euros, about $74,000.

People across Germany are reporting a problem with loud “igelsex,” or for those who don’t speak German, “hedgehog coupling.” Germany’s version of 911 has been experiencing a heavy call volume from people confronted with hedgehogs doing the dirty. In one instance, a school superintendent was hauled out of bed to investigate a loud, suspicious sound in a school playground. Hedgehogs are apparently among the loudest nocturnal animals — they snarl loudly at one another during their hours-long mating ritual, which has its own word in German: igelkarussell, which translates literally to “hedgehog carrousel.”

Workers at a recycling center were sorting paper when they discovered nearly $23,000 in cash that had been accidentally thrown away in a shoebox. An Oregon man contacted officials at the recycling company, Recology, in Humboldt County to report that the shoebox, which contained his life savings, had been thrown out in recycling before he realized the mistake. Workers were asked to be on the lookout for the shoebox, but officials considered it unlikely that it would be found. But one worker did indeed find the box, which still contained $22,940 of the man’s missing money. Only $320 was unrecovered.

A 42-year-old convicted drug trafficker attempted to escape prison by disguising himself as his 19-year-old daughter and then switching places with her. The man, who is serving a 73-year sentence for drug trafficking, tried to sneak out of a prison complex in Rio de Janeiro by wearing a wig, a silicone mask, a black bra, and a T-shirt with three pink doughnuts on it. Well, that plan didn’t work out so well. Prison guards saw through the disguise when the convicted trafficker asked for his daughter’s ID while attempting to leave, according to The Guardian. Footage released by prison officials show the suspect then removing the disguise after coming clean. The man was also one of 31 prisoners who attempted to escape another prison via the sewer system and his daughter was one of eight people who were arrested on suspicion of aiding the escape attempt. He has now been moved to another jail unit and is facing punishment for the failed escape.

A recently discovered fragment of an old German poem from the Middle Ages might change the way historians view sexuality of the time period. The poem involves a story of a female virgin arguing with her genitals about sexual desire and romance. The steamy poem, “The Rose Thorn,” was discovered by the Institute for Medieval Research at the Austrian Academy of Sciences in a manuscript at the library in Austria’s Melk Abbey. Although, two other copies of the poem were already discovered — this copy of the poem is 200 years older than the previous versions, which offers new insights into European sex in the Middle Ages in the 15th Century.