Monte Belmonte Wines: A Case for a Mixed Case 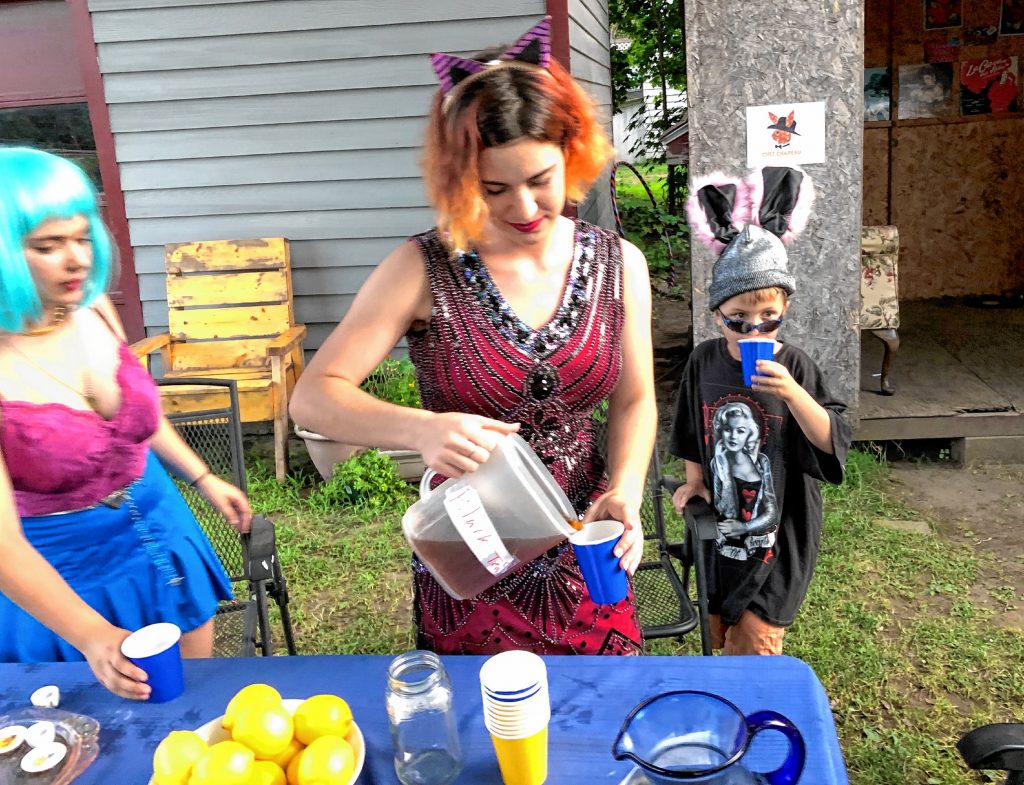 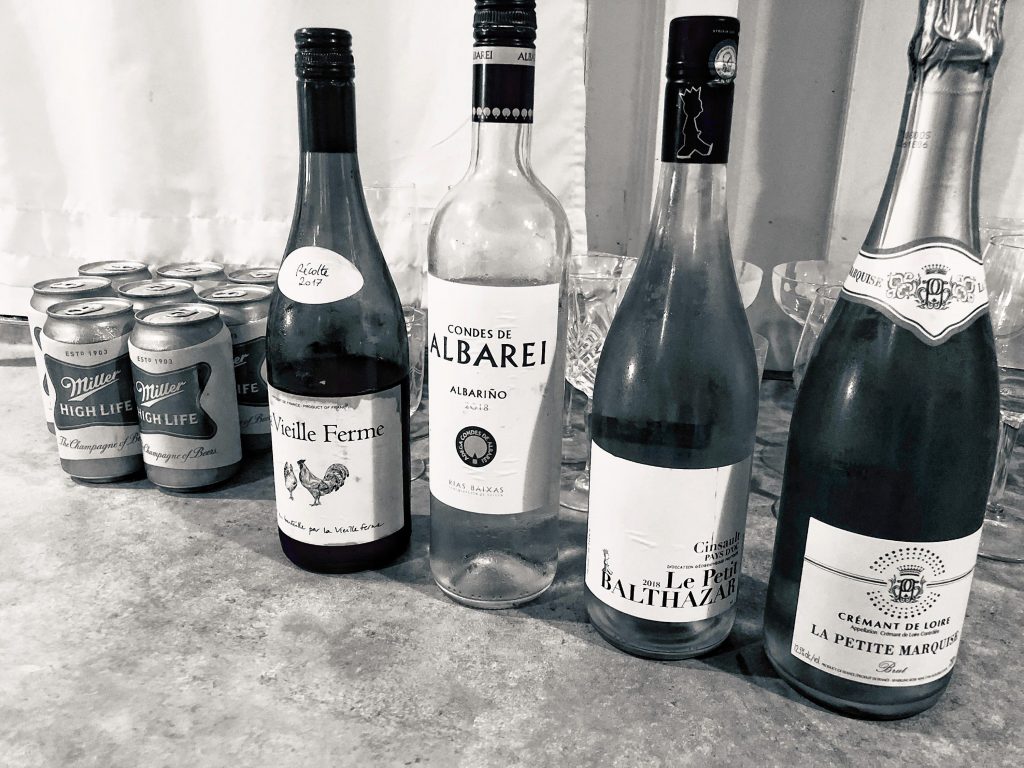 It was a dark and stormy night. Meaning a night where I could use a rum and ginger beer over ice with a slice of lime. But also, there was a thunderstorm looming. My children had taken over the inside and outside of my house in order to transform it into an immersive theater experience, sort of like Double Edge Theatre, but at my crappy little house in Turners instead of on a beautiful farm in Ashfield. Their inspiration? One John Bechtold, the head of the Amherst Regional High School theater department and a co-conspirator with my kids (and me) on numerous immersive theater experiences with the very grown-up Eggtooth Productions. They’ve done many shows over the years with Bechtold in Greenfield, Turners, Chester, and Amherst. Immersive theater breaks down the walls between actor and audience. The audience moves from place to place, scene to scene, inside and outside, even if it’s a dark and stormy night. 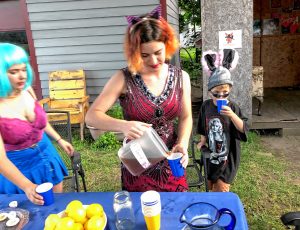 This night would be the debut of their production Alice. It’s a contemporary twist on the Lewis Carroll classic but set in a bar and brothel with drag queens, drug references, and everything that a parent wants to think their teenage (and tween and, ahem, 6-year-old) kid knows nothing about, but that Lewis Carroll was certainly no stranger to. My oldest, the 14-year-old brains behind this whole Alice operation, texted me (TEXTED me!) “will u plz get us a hookah tube thingy???” They stumbled across the hookah that I purchased in Cairo in the ‘90s. The hose had since turned to dust. But how could I say “no” to acquiring such an iconic prop for The Caterpillar? I’ve already told them not to smoke weed until they are 25, when their brains are thoroughly cooked. I strolled into Shop Therapy, and after purchasing a toy of my own, I completed phase one of my parenting mission: buy a hose, used to smoke drugs or flavored tobacco, for my children. FOR A PROP!!!! Just a prop for The Caterpillar. Alice in Wonderland … a children’s story, indeed. But Mission One: accomplished.

Mission Two: given that these kids have worked with many grownups performing in Eggtooth Productions — grownups who love this borderless style of theater — these grownups were invited to the show. And said grownups like to drink. Not “Drink Me” tea fit for a Mad Hatter and a Dormouse, but alcoholic beverages. Specifically, wine. But here’s the mystery: how do I, a private dick (meaning I mostly keep to myself), pick out the right amount of wine for the right amount of grownups at these kids’ performance. I had an answer: The Mixed Case (dramatic strains — dun dun DUUUUUUUNNNNN!)!

How many grownups would be coming? How could I make sure I had something for everyone. The teen texted (TEXTED!) me again. “mom says to get alchohol (sic) for 20ish adults on friday and 12ish on saturday”. What is it with teens and their lack of capitalization and punctuation in digital communication? I crunched some numbers and figured out that, over two days, I needed some drink for 32 people. The USDA classifies a glass of wine as five ounces or about 150 milliliters. That means there are about 5 glasses in a bottle of wine. But 5 ounces looks really tiny in a glass. I bet the last time you poured yourself a “glass” it was way more than 5 ounces. So, let’s say there are 4 glasses to a bottle. To give all my guests a glass, I’d need 8 bottles. But knowing the audience who would be attending, some of these guests would certainly want more than one glass. And due to my ingrained Italian-American upbringing, it is always MUCH preferred to have way too much than to run out. So I opted for 12 bottles. And 12 bottles, my dear Watson, is a case of wine.

I don’t know how often you buy a case of wine. It’s usually only one or two bottles of wine at a time for me. And I fashion myself a pseudo-wine snob. The reason for this is that I am a cheap bastard. And the thought of spending more than $30 for two bottles of wine at any given time seems intimidating to my wallet. And I fear the inevitable, impending conversation about the wisdom of such a monetary decision with the keeper of household finances, the thespians’ mother. But now, I had an excuse for a case. 32 people! Maybe the time was right to buy 12 bottles at one time. And there is sound financial reasoning behind it. Many wine stores offer up to 20 percent off if you buy a case. But the idea of picking twelve bottles of the same wine was right out. Would it be 12 reds? 12 whites? A dozen rosé? This wouldn’t do at all. I had a case for a mixed-case. 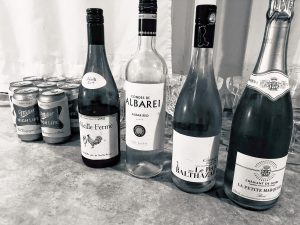 A mixed-case is exactly what it sounds like: 12 bottles that could all be different. I would still save money but not as much. Ten percent rather than 20 percent. It was opening night. I went to work. I still wanted stuff that was cheap. Good, but cheap. “Don’t throw your pearls before swine,” a voice from my past rang in my head. Not that the guest were swine. But the kids did have a scene where a mother was comforting a “rather handsome pig” who was crying like a “dreadfully ugly child.” How did they make that pig cry? The technology these kids have at their disposal!

One: the Moulin de Gassac Guilhem white from the Languedoc in France. Two: Wither Hills from New Zealand — one of the only affordable Kiwi Sauvignon Blancs I like. Time was running short. Three: La Petite Marquis Rosé — a sparkling wine from the Loire in France. Four: Cricova Sparkling Rosé from from Moldova. The dark clouds were approaching. Five: the Domaine Des 3 Versants Muscadet from France. Six: Condes de Albarei Albariño from Rias Baixas in Galicia, Spain. Seven: the Aveleda Alvarinho from Portugal! EIGHT: “I’m LATE, I’m LATE for a very important date!” The Le Petit Balthazar Cinsault Rosé! I rush the wines to the counter and watch as 10 percent vanishes from each bottle of these already affordable wines. And I threw in a 12-pack of Miller High Life (The Champagne of Beers) for those who don’t like wine. 12 bottles and a 12 pack. Grand total=$129.97.

To me, that is a FORTUNE. It’s mad. But “we’re all mad here.” The dark and stormy clouds passed by the production and I was able to serve 32 grownup guests who have loved and supported the artistic endeavors of my children for their entire life, not to mention the fact that I ended up with three-and-a-half bottles of wine left over after the production wrapped. That’s a case for a mixed case. As the Duchess says in Alice in Wonderland, “Everything’s got a moral, if only you can find it.”