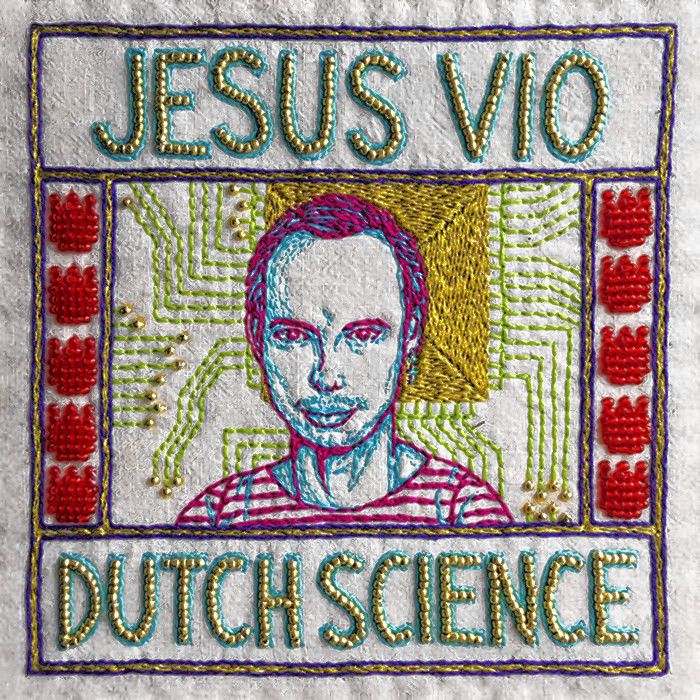 Jesus Vio’s new album Dutch Science kicks off with the mother of all questions: “Do You Believe?”: The vamping, minimalist, proto-acoustic track wryly asks “Do you believe in Halloween?” before declaring that “P.U.M.K.S. is not dead,” introducing the irreverently catchy album’s whimsical side.

Vio and his band — Cornelia Overton [bass, violin, vocals] and Austin Edwards [drums, keys, vocals] — have recalibrated punk; ditching electric guitar for classical, keys, and violin, leaving headroom for hooks to breathe. Beyond that, it is a punk record of songs, each one meticulously crafted with well-defined interlocking parts and sections, playing off one another with aplomb. The lyrics, somewhat like the human brain, shift between fragmented, humorous thoughts, and more reflective songs 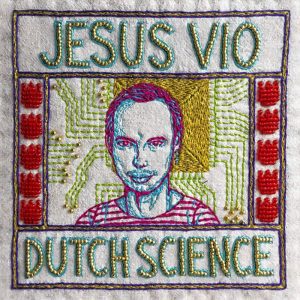 Vio carries the torch forward from his previous band — Boston-based Free Pizza, known for their head banging jams, but disbanded a few years ago when Vio moved to Nashville, where Dutch Science was recorded in 2017 at a house called The Pet Cemetery. In Nashville, Vio and his bandmates honed their sound, tweaking the arrangements that would become the record.

All the songs are short. One of my favorites, titled “Civics,” clocks in at just 14 seconds over just finger snaps a whole crew of vocalists in unison declare “Remember to put your favorite books in to your book bag, so in case someone steals it, they have a lot of good books to read.” Shredder features the vocals and lyrics of “Overton,” describing what sounds like the tortured tedium of catering a wedding with a touch of monotone. Perhaps the most conceptual, however, would be “Artitecture Smash,” which Vio once described to me as a “critique of modern architecture.” The song is about skateboarding, implying that the skating is a way to subvert the city and its menacing brutality.

Vio has made an album without a bad song, first and foremost. But the band has also pioneered a new sound, taking the raw energy of punk and turning it inwards: creatively adding layers and textures that make the sound uniquely theirs. The classical guitar, the magical realism, and the violin expand on what punk can be, so clearly showing that PUMKS is not dead.