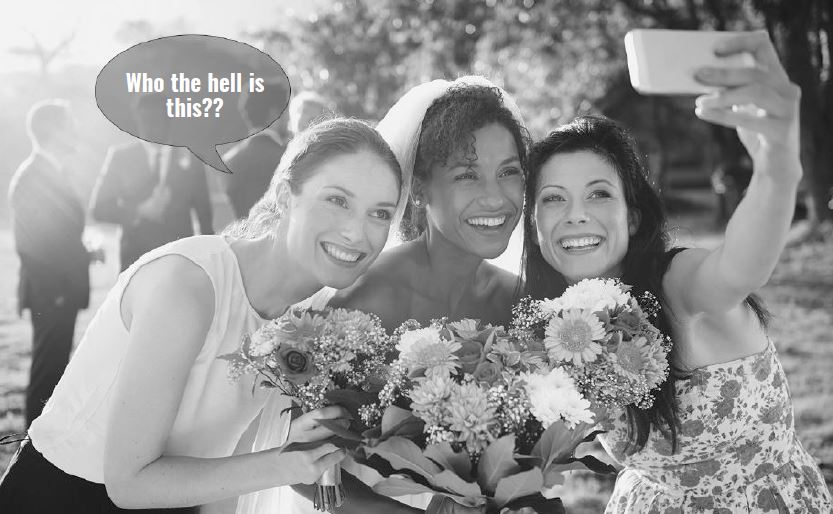 Police in Texas are asking the public for help in finding a thief they are calling “The Wedding Crasher.” The Comal County Sheriff’s Office has described the suspect as arriving uninvited to weddings, posing as a guest and then stealing gifts, according to a news release. Not only has The Wedding Crasher frequented wedding events in Comal County, but in surrounding Texan communities as well, and a local non-profit called Coman County Crime Stoppers has posted a $4,000 reward for information leading to the suspect’s capture. Surveillance photos of the suspect were also posted on the non-profit’s Facebook. “Let’s not let her ruin anyone else’s special day and bring this crasher to justice,” Crime Stoppers posted. We’re guessing the thief now has a lot of duplicate kitchenware.

Last month, a 12-year-old Ohio boy made a startling discovery while playing in a creek bed: a nearly eight-inch woolly mammoth tooth. The boy and his father immediately began Googling what the object could be, and after reaching out to local archeologist experts, they confirmed the object had belonged to the mammal that went extinct 10,000 years ago. Mastodon and mammoth fossils have previously been found in the state. When the boy sent the tooth to be confirmed by archeologists, he included a note that read, “I would like to have my tooth back in my hands as soon as possible. I want to show my friends.”

In Henrico County, Virginia, there’s a strange unknown person wearing a jumpsuit and a television set on their head. Weird? Well, it gets weirder. This person has left vintage TVs on at least 60 porches. One resident told Richmond, Virginia, station WWBT that the unknown vintage TV fan just puts the TV on their porch and leaves. Another resident found a vintage tube-style 13-inch TV on his porch and though it was “sort of funny,” but doesn’t understand the purpose of the prank. The Henrico Police Department believes more than one person is doing the TV porch dumps. Although no crime is being committed, police urge anyone to call the department if they spot any suspicious activity related to the would-be pranksters. But this isn’t the first time TVs were left on porches in Henrico. Last August, 20 television sets were left on porches. It’s unclear whether the two events are connected.

Doctors in a hospital in the United Kingdom were surprised to find a man’s missing dentures after an X-ray scan. They were lodged in his throat. The dentures went missing after a surgical procedure and the 72-year-old patient returned to the hospital six days later to remove a lump in his abdominal wall. While at the hospital, he complained of difficulties breathing and swallowing. He was sent home with a prescription of mouthwash, antibiotics, and steroids, but the symptoms grew worse and so he returned to the hospital two days later. The man’s false teeth were discovered lodged in his throat and were causing internal blistering and swelling. Since the surgery to remove his dentures, the man has fully recovered.

We need an alternative for ‘the’

Ohio State University has a great plan. The university wants to trademark the word, “the,” which would be used as part of the school’s name in regards to merchandise that the school sells. The Columbus Dispatch reported that the school submitted their trademark application this month to the U.S Patent and Trademark Office, which likely won’t be thrown out completely. The university secured other trademarks in the past such as the name of football coaches Woody Hayes and Urban Meyer. Last fall, the university had 150 trademarks in 17 countries with applications still pending.

Raccoons are known to adapt to many environments, including urban locales. Now one of the black-masked critters has taken things to another level. In Volusia County, near Orlando, Florida, a raccoon attempted to nab a snack from a vending machine at a regional high school and wound up getting stuck in the big dispenser for several hours before animal control officers were able to free it. “This gentleman was apprehended today while committing a burglary of a vending machine at Pine Ridge High School,” the Volusia County Sheriff’s Office wrote on its Facebook site. Authorities said they believed the animal got into the machine through its bottom door, but they did not know whether the would-be thief actually ate any of the snacks.

Just trying to make a buck

A Florida man was sentenced last month to 40 years in prison after he plotted to leave bombs in Target stores on the Eastern seaboard, hoping to make a tidy profit after the retailer’s stock prices would presumably drop following a string of deadly explosions. The 50-year-old man, of Ocala, was convicted on federal charges of attempted arson, possession of an unregistered destructive device and making an unregistered device, according to NBC News. According to law enforcement authorities, the suspect, a registered sex offender in Florida, offered another man $10,000 to place bombs hidden in food packages in Target stores in Florida, Virginia, and New York and also said “If someone has to die so that I can make some money, so be it.”

Taking the piss out of hunting

Next year, there won’t be any commercial scents made from real deer and elk urine for hunters in Oregon to use. That’s because state officials want to curb the deadly Chronic Wasting Disease, which impacts elk and deer. Oregon Gov. Kate Brown recently signed a bill, which was passed by the Oregon Legislature, that bans nature scents. Oregon now joins seven other states in only allowing synthetic-based scents as a means to mask human hunters trying to get a leg up on the game they hunt. The ban will take effect on Jan. 1, 2020. Owners of the scent are asked to bring them to an Oregon Department of Fish and Wildlife office where they will then be incinerated in an oven at 1,800 degrees Fahrenheit.

One disgruntled employee at a British Birds Eye food-processing plant had the last laugh after he allegedly urinated on loose peas on their way to be packaged. An eight-second video clip taken on a phone shows the man appearing to urinate on the vegetables passing through a conveyor belt, but officials are unclear if he just pretended to pee on the peas by using a hose. According to British publication The Sun, the frozen food company might have to discard an entire week’s worth of peas, which is about 10 million bags.