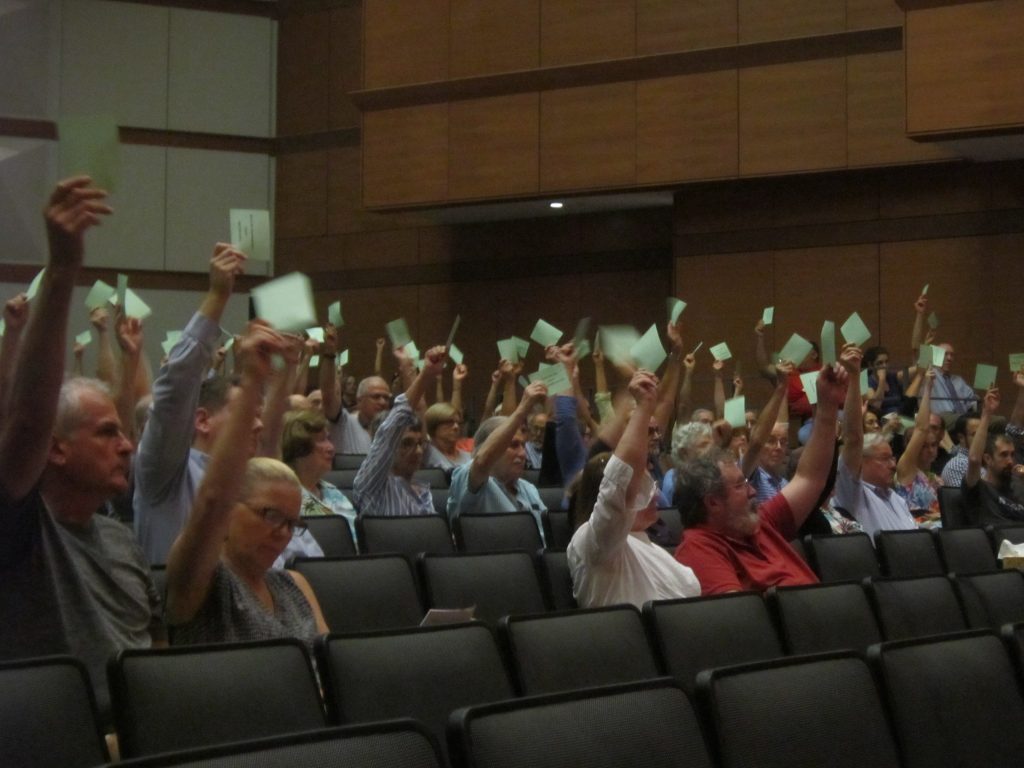 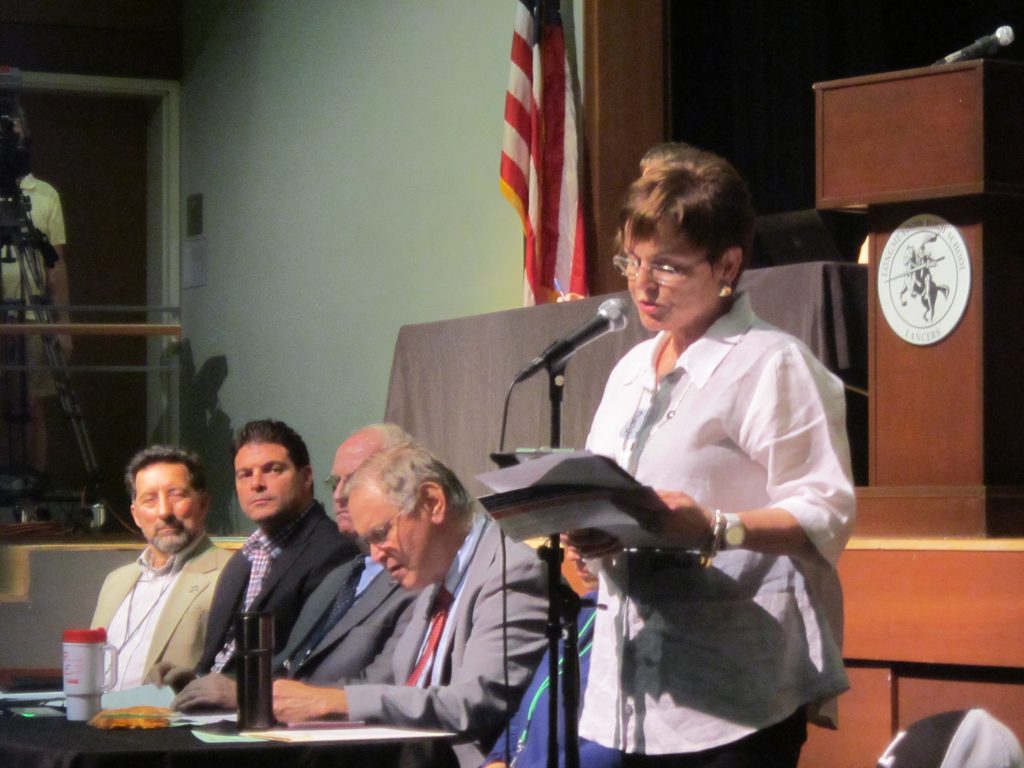 Town Meeting voters in Longmeadow overwhelmingly approved a change to to the town’s zoning bylaws Tuesday, which would prohibit a proposed Tennessee Gas Company meter station project in a residentially zoned neighborhood at the Longmeadow Country Club.

More than 200 residents lifted their green voting cards into the air during the Special Town Meeting vote with only a solitary resident voting against the zoning change. During resident comment period, no one spoke in favor or against the zoning bylaw changes. 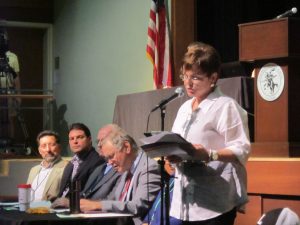 The article was petitioned by resident and Longmeadow Pipeline Awareness Group founder Michele Marantz, who told the Valley Advocate prior to the meeting that the group has been working to stop the gas expansion in the predominantly residential community for the past year and a half.

“Everybody wants to know right now what is the next step?” Marantz asked after the vote. “So, the bylaw now goes to the attorney general’s office and they have to approve it. And when they approve it. I expect that they will approve it. It becomes active as of tonight. It’s retroactive as it was passed.”

But this isn’t likely the end for the project in Longmeadow, Planning Board member Bruce Colton said. The zoning change bans the creation of an easement for the proposed Tennessee Gas metering station because the country club is zoned residential. However, the project could move forward at business or agricultural zoned areas in the town.

Marantz said she thinks this isn’t the end of the project in Longmeadow.

“This is our teeny little shot across the bough,” she explained. “I would like to think that we are protected as a community, but I really know that they will challenge this. There will be court challenges and it’s going to go on for some time because they have a lot of money and this is the cheapest and most convenient spot for them and they’re going to pursue this.”

Last week, the Longmeadow Planning Board voted unanimously (3-0) to support the zoning bylaw change. In a written statement the board wrote, “It is a strong belief of the Planning Board that these facilities have no business being located in, or adjacent to, residential neighborhoods, close to schools and playgrounds.”

Colton said in one instance a family has already moved away from the town for fear of their children attending Wolf Swamp Road Elementary School with the natural gas project located just over a mile away.

Select Board member Mark Gold said prior to the start of the Special Town Meeting that his personal concerns about Columbia Gas is that the company has proven itself to be “unworthy” due to health concerns regarding leaks and explosions such as the September 2018 Merrimack Valley gas explosions, in which one person was killed and 30,000 people were forced to evacuate their homes.

Select Board Chair Marie Angelides declined to comment about the gas pipeline project, but stated the town of Longmeadow is in communications with Columbia Gas.

The Longmeadow meter station is also a part of a larger pipeline project in the Pioneer Valley, which Marantz said affects six other communities: Springfield, West Springfield, Agawam, Northampton, Easthampton, and Holyoke.

On April 22 (Earth Day), Holyoke Mayor Alex Morse released a statement opposing construction of a new gas pipeline in his community, according to the city’s website. In November 2018, Northampton Mayor David Narkewicz publicly stated that the city was opposed to the gas pipeline project.

In an “open letter to our customers” mailed to Longmeadow residents by Columbia Gas, the company states that the “Tennessee Gas Pipeline will install a new point of delivery on an existing line in the town of Longmeadow to support uninterrupted service to Longmeadow, Springfield, Chicopee in the unlikely event of an interruption to the current single point of delivery across the Connecticut River. This project supports Columbia Gas’ removal of leak-prone pipe in Longmeadow, Springfield, and Chicopee.”

The letter also states that the Tennessee Gas Pipeline would replace two existing older and less efficient compressor units at Compressor Station 261 in Agawam. The company would also install a two-mile pipeline loop located along an existing right of way in Agawam, and replace 8,5000 feet of existing line with new pipe in West Springfield.