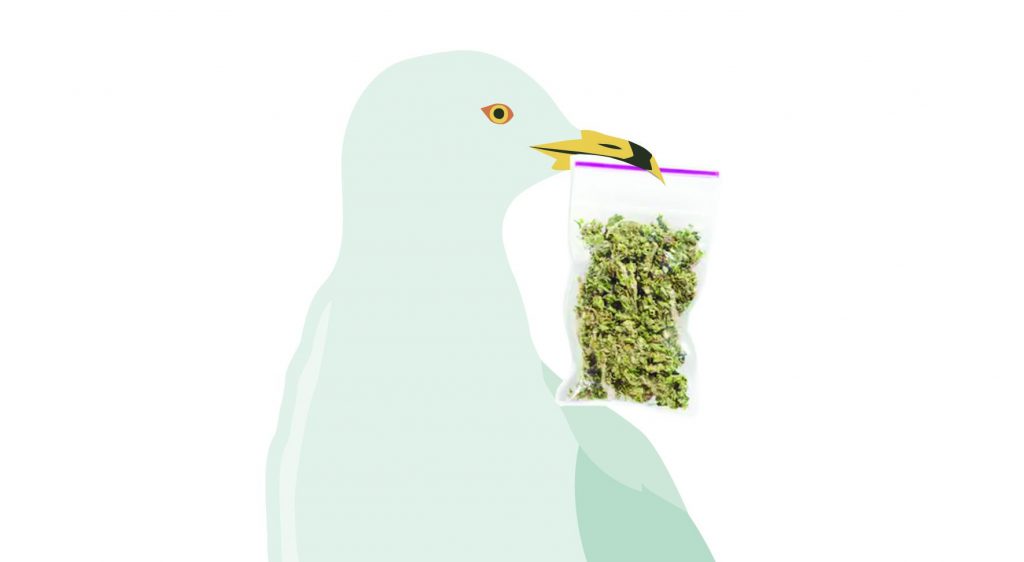 Sweden has among the toughest marijuana laws in the world, with no allowance for recreational or medical use, and a punishment of a large fine and up to six months in prison. That would have been bad news for a Gothenburg man, who had a bag of marijuana at the city’s cultural festival, except that the moment a plain-clothes police officer was about to confiscate the bag, a seagull swooped down and snatched it. The bird made off with the evidence, and the man made a hasty escape.

A New York couple’s West Palm Beach, Florida, vacation was thrown to the birds recently after more than a dozen black vultures thought it would be funny to perpetually vomit and defecate on the luxury property. And so it was. The New York family can’t visit their $702,000 home in the Ibis Golf and Country Club, which they purchased earlier this year, because the stench has been described as “like a thousand rotting corpses,” according to the family. The vultures also destroyed screen enclosures and decided to take over the poolside and grill. When the family visited their property, they had to park their car in the garage for fear of being attacked by the birds. It wasn’t until three police officers arrived that they were successfully able to shoo away the birds.

It’s all in your head … literally

A woman from Missouri had the unfortunate experience of having a venomous spider removed from inside her ear after it crawled in while she was asleep. On a recent morning, she felt a sensation in her ear similar to when “you have all that water in your ear,” the woman said. She felt some discomfort and went to see a doctor to have it checked out. The doctor proceeded to remove a brown recluse spider — which has a bite that can cause stinging pain and several lesions that require medical attention. Luckily, the woman was not bitten, and she said she will sleep with cotton balls in her ears from now on.

As if going through airport security wasn’t already enough of a headache, now you may have to deal with insults from the Transportation Security Administration. Recently, a June incident at Greater Rochester International Airport in upstate New York came to light after a female security worker there was fired for handing a passenger a handwritten note that said “You ugly!!” as he went through a checkpoint. The passenger later obtained security video through a records request and posted it to YouTube. He says he didn’t look at first at the paper the security employee handed her and continued walking, but she yelled “You gonna open the note?” When he did, the woman burst out laughing, and he later complained to supervisors. The TSA says the woman worked for an independent contractor and that the agency has “zero tolerance for this type of behavior.”

A Welsh town in the United Kingdom is installing new toilets in a local park with an added feature — to discourage people from having sex on the toilet. The town of Porthcawl in Wales is spending more than $200,000 to replace bathroom facilities at Griffin Park to include the new security feature, which would have weight-sensitive floors designed to determine whether more than one person is inside the bathroom. The bathroom is designed to automatically open the doors, shoot water jets, and create a high-pitched alarm if any violent movements are discovered. The bathroom stalls also feature timed lights and sirens and graffiti-resistant walls. If anyone decides to smoke inside the bathroom, they would cause fire-prevention measures to trigger, drenching in water anyone and their cigarette, cigar, or blunt.

Put your money where your mouse is

A city in Germany is offering a $1.1 million reward to anyone to prove that it doesn’t exist. The mayor of Bielefeld, an 800-year-old city in Germany, will award cash to anyone who can present factual evidence proving that the city in fact does not exist. If this sounds like a skit from Monty Python, you’d be wrong. The city is the focus of internet jokes and conspiracy theories dating back to the mid-1990s claiming that Bielefeld doesn’t exist. Our thought is that it probably does.

And now for something completely different …

Here’s a headline for you: “Sex pigs halt traffic after laser attack on Pokémon teens.” The credit for that one goes to The Local Sweden, which published a story in Insjön, Sweden, about a couple in pig masks and a green laser pointer who pointed the laser at a group of teens playing Pokémon Go (of course). The “sex” part comes in because the same couple, who were also wearing T-shirts that said “King” and “Queen,” were later spotted by motorists having sex next to one of the town’s landmarks, a water wheel. Despite their apparent penchant for drawing attention to themselves, the couple has eluded police.

Thought you had a rough two or three days? A woman in Oregon has you beat. Firefighters rescued the woman, who declined to be identified, from a septic tank after she spent two or three days neck-deep in sewage. Work was being done on the tank and the woman apparently fell into a two-foot by two-foot hole leading into it. She was only found when the woman’s daughter went to check on her and couldn’t find her in her home. The woman was weak when she was retrieved from the tank and was airlifted to a hospital in Portland over concerns over lack of oxygen and infection.