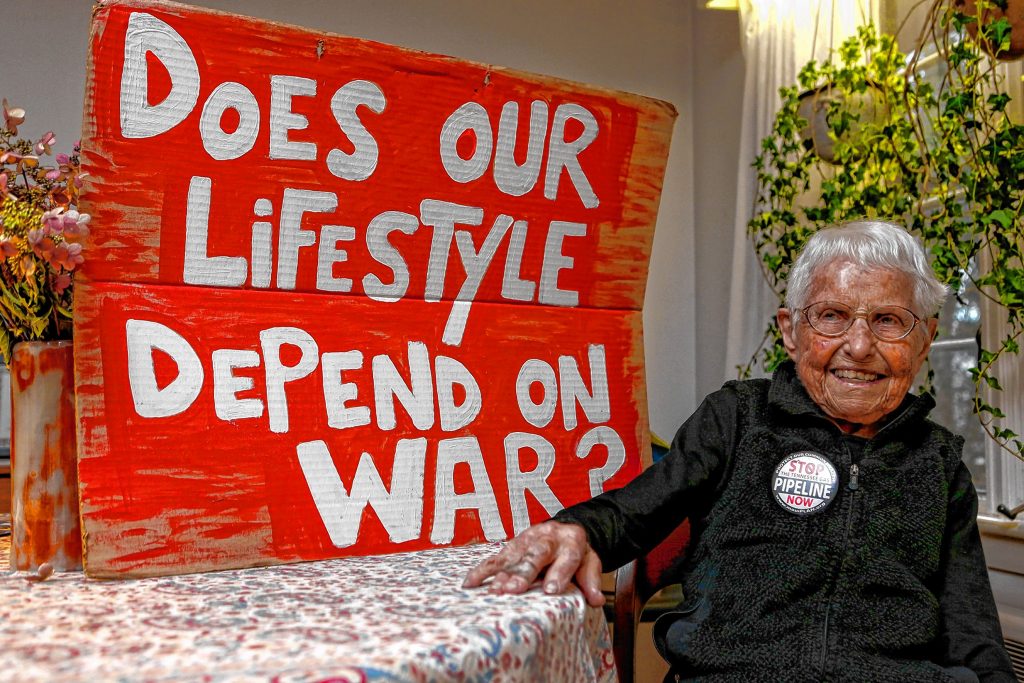 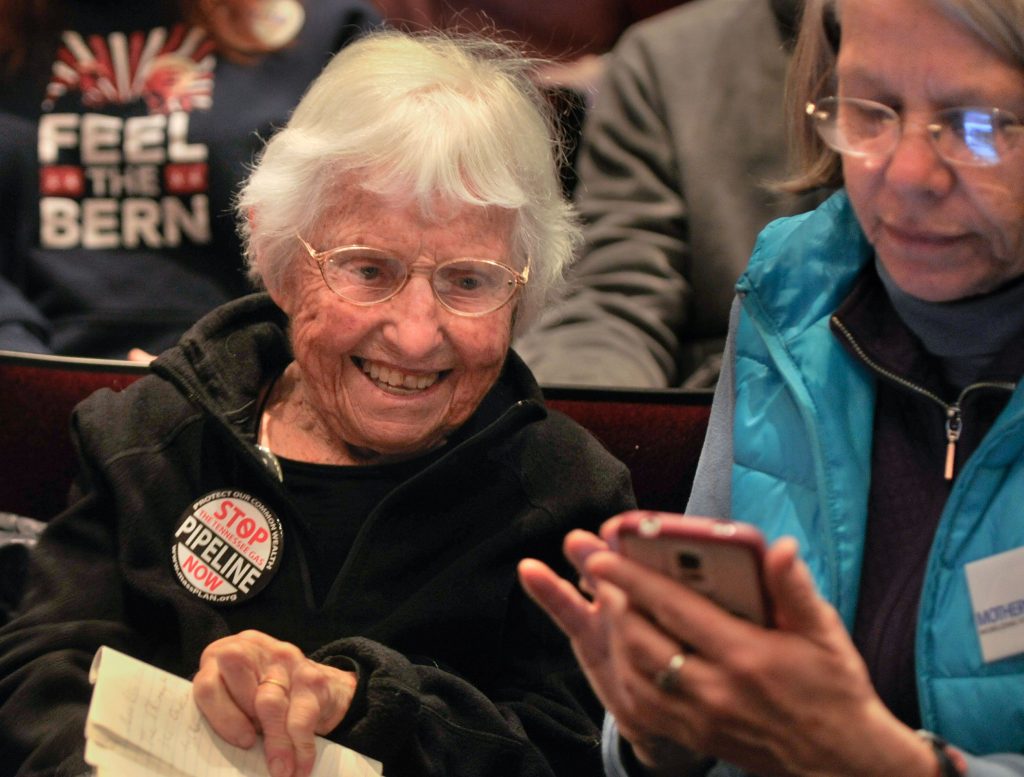 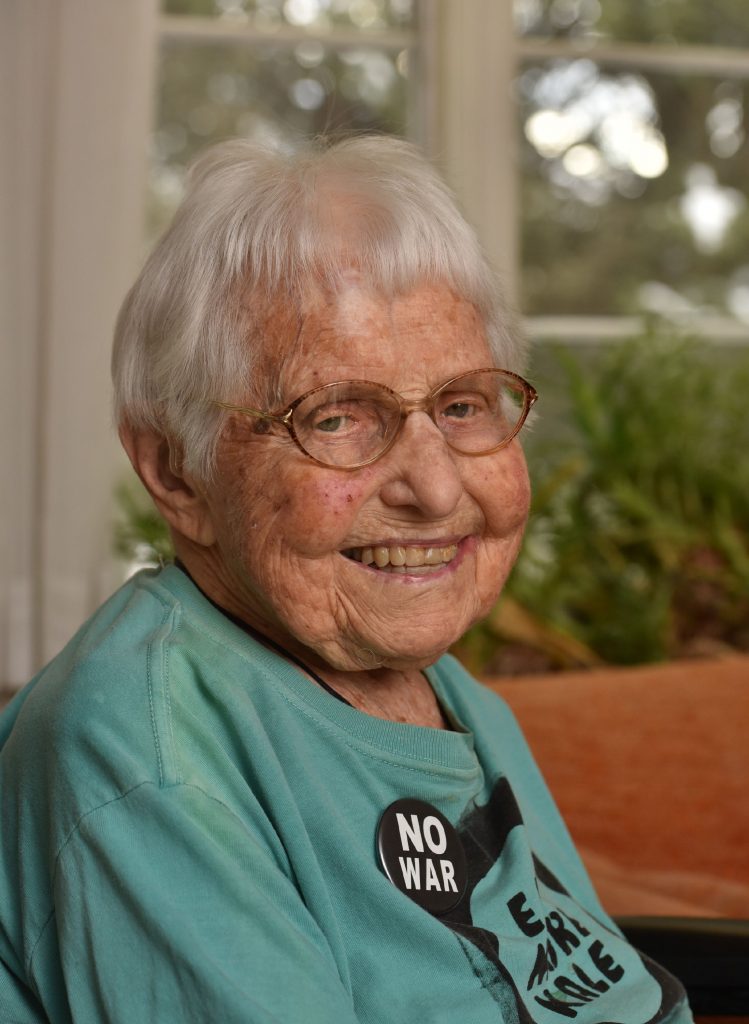 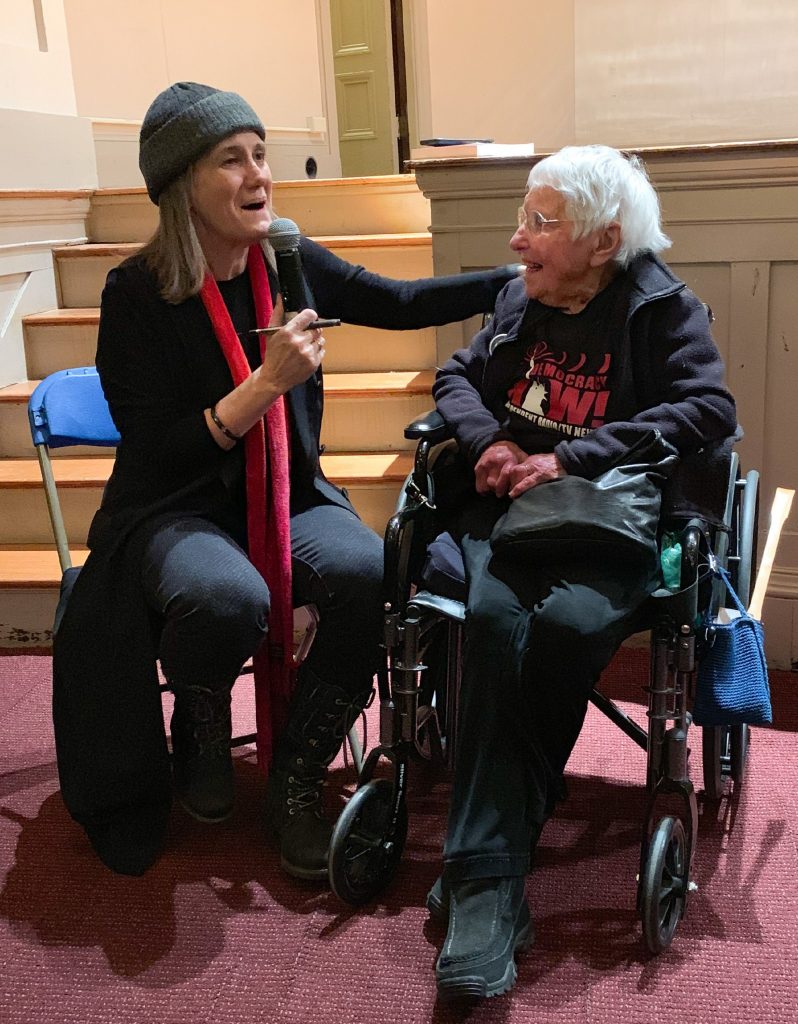 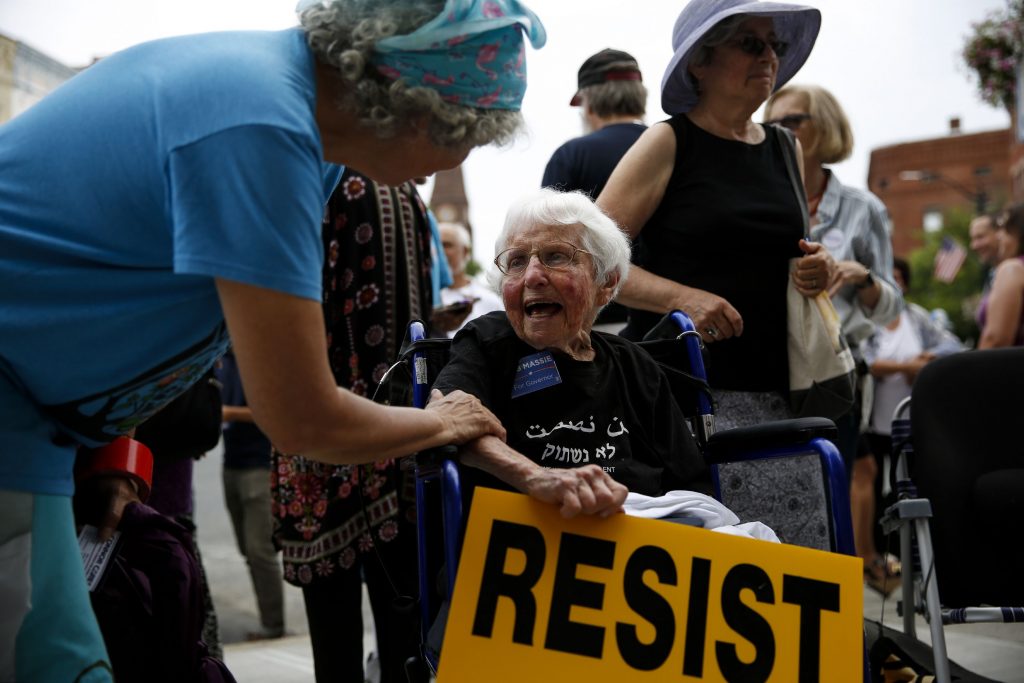 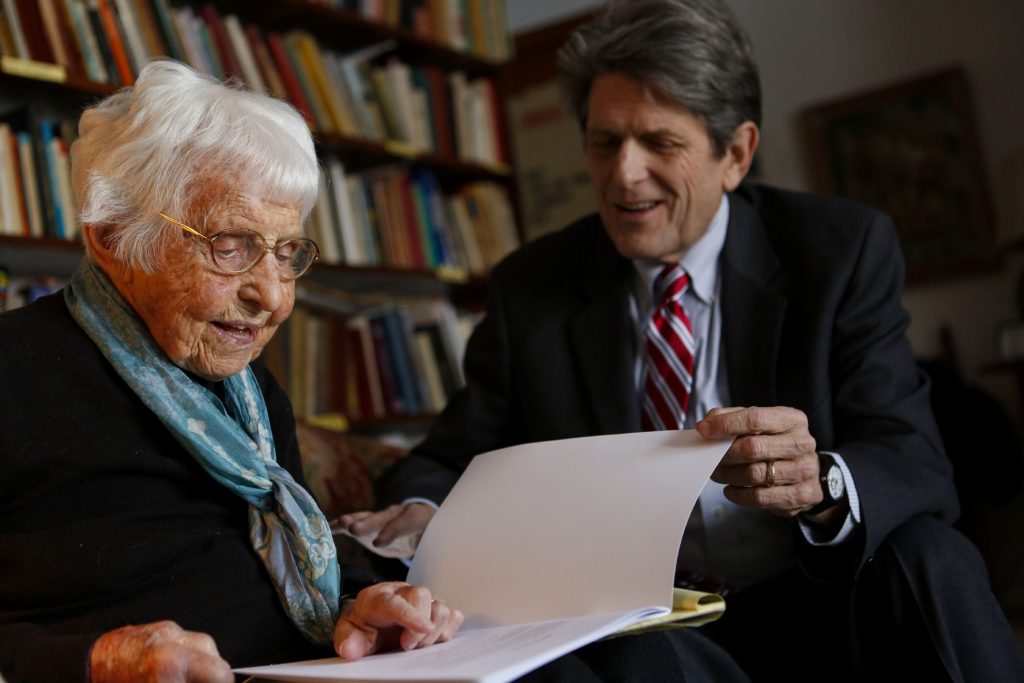 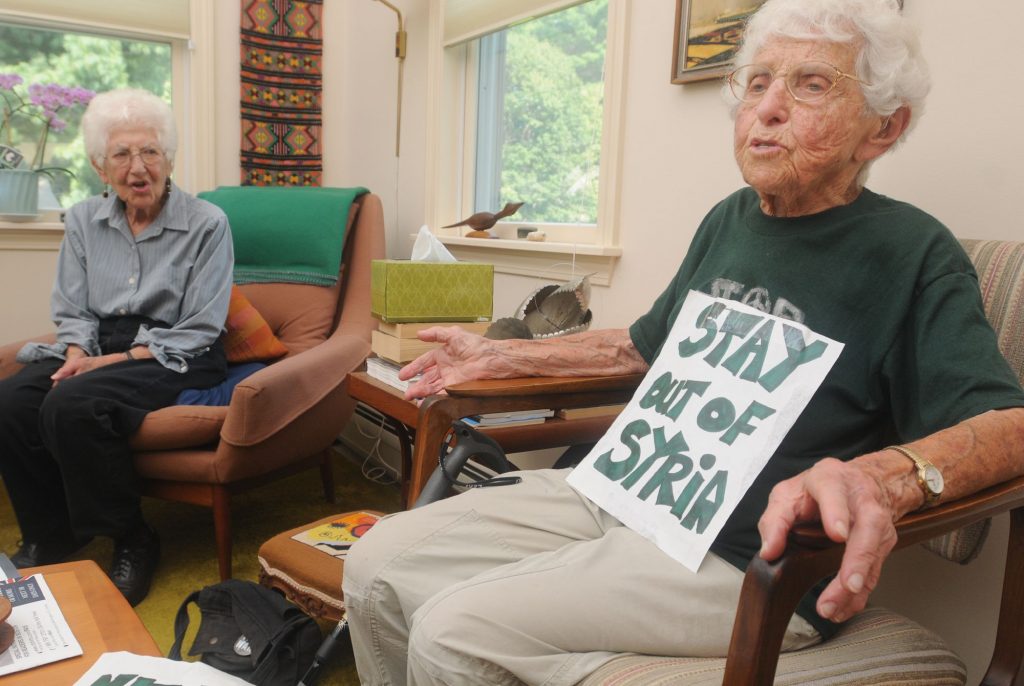 Arky Markham and Frances Crowe in Markham’s home in Northampton in September 2013. 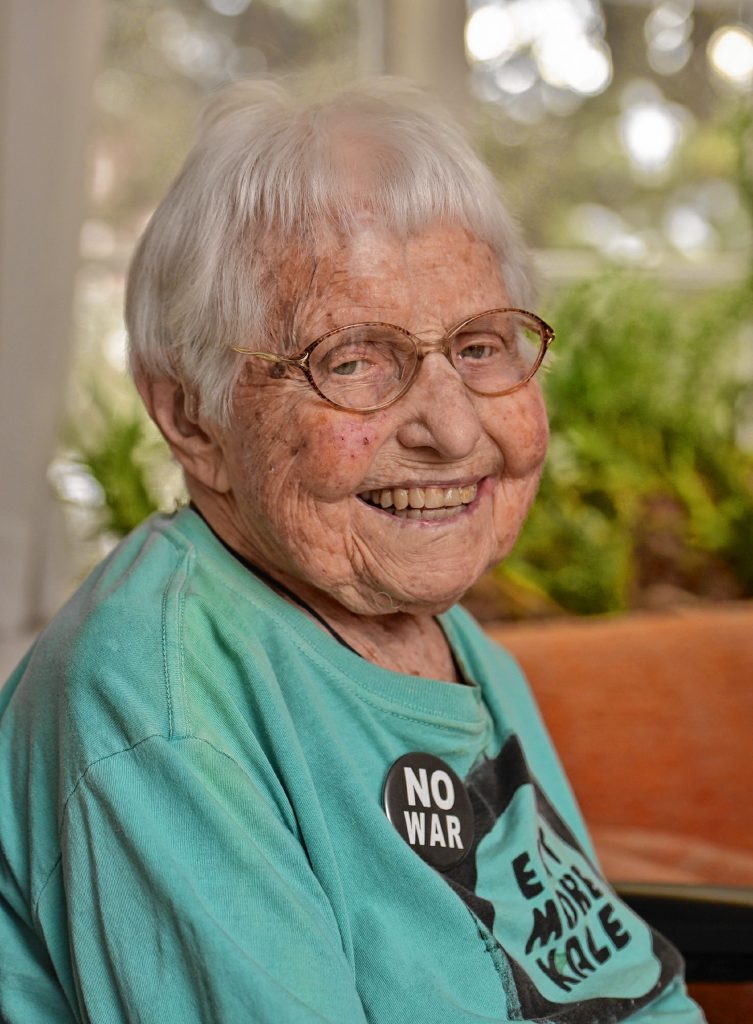 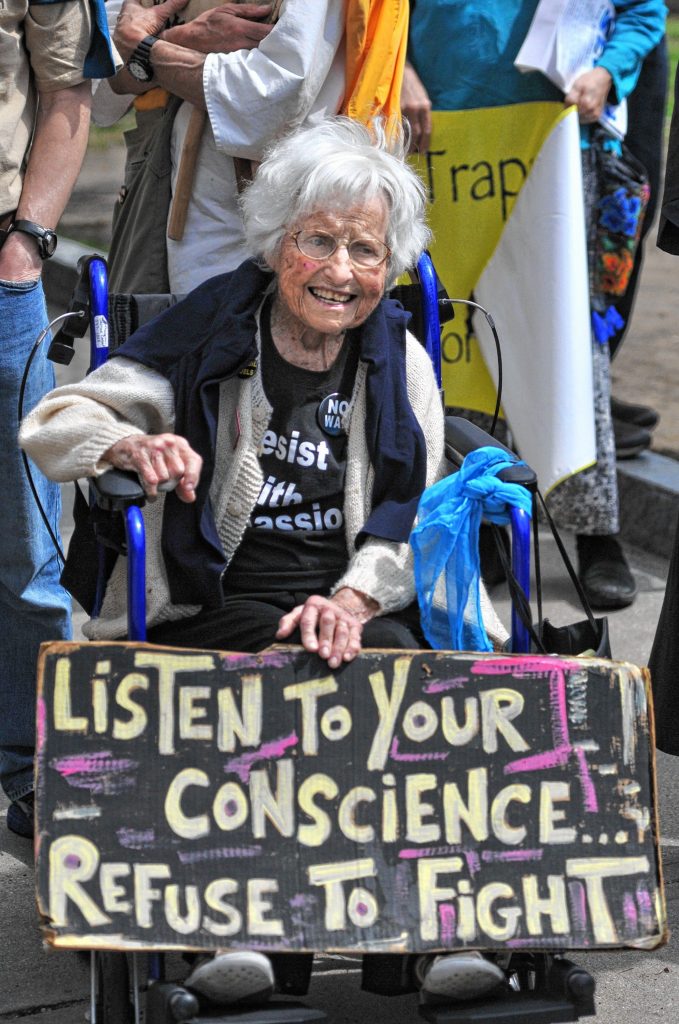 Frances Crowe during a anti war rally in Northampton in April 2017. 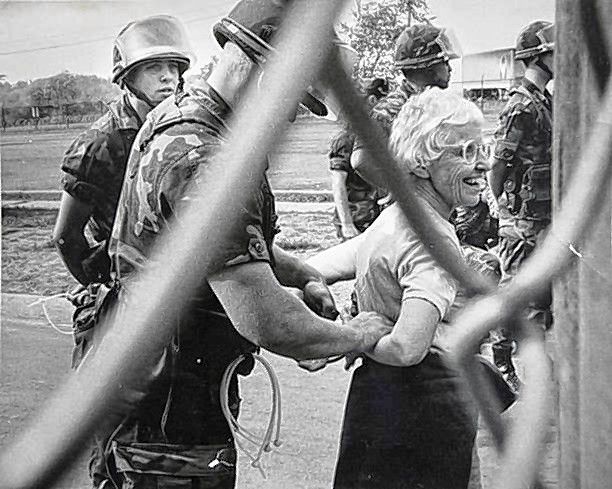 Frances Crowe is arrested for trespassing while protesting nuclear weapons at an air base in 1983.

“She lived an amazing life and had a beautiful death at home surrounded by her children,” Crowe’s 72-year-old daughter, Caltha, said. She said Crowe died after taking to her bed eight days ago, with hundreds of loved ones coming to visit and calling her throughout the week.

Crowe, herself a Quaker, was a committed pacifist who was arrested countless times during protests against everything from war and nuclear weapons to environmental destruction. She was known across the Pioneer Valley and beyond for her activism, and inspired many to follow in her footsteps.

“The phone rings about every three minutes and it’s somebody from somewhere in the world calling to make sure we know how much they loved her,” Caltha Crowe said. “This has been the most unbelievable experience.”

Born in Carthage, Missouri, in 1919, Crowe moved to Northampton with her husband, Thomas, in 1951, and soon began organizing anti-war and anti-nuclear campaigns. In a recent Advocate cover story, Crowe wrote that she decided to oppose war after the United States dropped two atomic bombs on Japan.

As the American war in Vietnam began to escalate, Crowe founded the local chapter of the American Friends Service Committee in 1968, which she ran out of her basement. The organization provided counsel to around 2,000 men applying for status as conscientious objectors to the war.

In a 2018 article for the Daily Hampshire Gazette, Crowe described the first time she was arrested while staging a peaceful protest on International Women’s Day. The date was March 8, 1972, and together with a group she helped organize in 1970 called Women Against the War, Crowe demonstrated at Westover Air Force Base in Chicopee, where B-52 bomber crews trained before duty in Vietnam, Cambodia and Laos.

“Some 30 of us dressed in black pajamas, the traditional garb of rural Vietnamese women,” Crowe wrote. “We hoped bystanders would feel the suffering of Vietnamese women if we dressed like them. We also hoped that young men facing conscription or drafting into the U.S. military would see the humanity of the Vietnamese people and examine their consciences about entering the army.”

Since then, Crowe has been a key figure in organizing or inspiring activism across the region. She co-founded the Traprock Peace Center in Deerfield and other local peace and anti-nuclear organizations, and was well known for chaining herself, along with other protesters, to the Vermont Yankee nuclear power plant.

That work has inspired many, who together mourned her death.

“Frances absolutely changed my life,” said state Sen. Jo Comerford, D-Northampton. Comerford said Crowe was one of the first people she met when she arrived in the Valley in 1998. “I was headed down a different path, and she was a beacon.”

Comerford worked at the American Friends Service Committee for seven years, and she said she often would run into people who had been inspired by Crowe. Once, she met a woman in New Hampshire holding weekly anti-war vigils. When Comerford asked why she was holding those vigils, the woman said she was following Crowe’s example.

“There are people like this all over the Northeast — and I’m sure beyond that — who picked up a call to action because Frances told them to,” Comerford said.

The Rev. Andrea Ayvazian was one of the people who helped Crowe organize weekly anti-war vigils in downtown Northampton.

Ayvazian said she met Crowe in 1981 after one of Ayvazian’s students at Hampshire College wrote her capstone project about local women who inspired her, including Ayvazian and Crowe. That student organized a get-together for them all in Crowe’s basement, but then got a stomach bug and couldn’t attend. So Ayvazian found herself alone with Crowe in her basement.

“Frances and I talked for many hours, and basically I never left her basement,” Ayvazian said.

The two grew close over decades of activism, and were arrested together around a dozen times, Ayvazian said. When she visited Crowe on her deathbed this past week, Ayvazian said, she sang some of the songs they used to sing in jail together, with Crowe mouthing the words with her.

Many of those remembering Crowe recalled her consistent ability to move others to action. Even in her final days, she was checking in with friends about their activist work.

“She was an organizer to the very end, essentially,” said Jeff Napolitano, executive director of The Resistance Center for Peace and Justice — the successor organization to the American Friends Service Committee of Western Massachusetts, which closed in 2017. “There’s no way to overstate her impact.”

“It’s not so much what she could accomplish on her own,” said friend and fellow activist Claudia Lefko. “What was amazing about Frances was that she gave people ideas — she inspired them. And she supported them.”

Lefko said that when she talked to Crowe this week, Crowe said one of the most important things she did in the Pioneer Valley was successfully fight to get the independent news program Democracy Now! on the local airwaves in the early 2000s.

Together with local musician and activist Ed Russell, Crowe helped bring the program to the Valley by making illegal pirate broadcasts of the show — first with Russell climbing Mount Holyoke to operate the broadcasts, and later transmitting from Crowe’s backyard. Eventually, she was able to get WMUA to pick up the show, and the station has run the program ever since.

“I think that just demonstrates who Frances is — just her passion for information, her deep belief that getting information out was a means of liberation,” Democracy Now! host and renowned journalist Amy Goodman said Tuesday. “She just would not take no for an answer, and it just so deeply inspired us.”

Goodman said she came to know Crowe in 2005 when she interviewed her in Northampton. Goodman was recently at Crowe’s 100th birthday, and said she spoke with Crowe last week after she had stopped eating and drinking.

Goodman pointed out that as Crowe passes away, the 16-year-old Swedish climate activist Greta Thunberg is set to arrive in New York after traveling in a zero-emissions sailboat from Europe in advance of the U.N. Climate Summit.

“Really, Frances passes the torch,” Goodman said. “And what she cared about was equality, peace, a nuclear-free world, and she has helped make that happen.”

Crowe is survived by her three children — Caltha, Jarlath, and Thomas — five grandchildren and two great-grandchildren.