Fifty Years From Now, What Will They Say About the “Summer of ’19”? 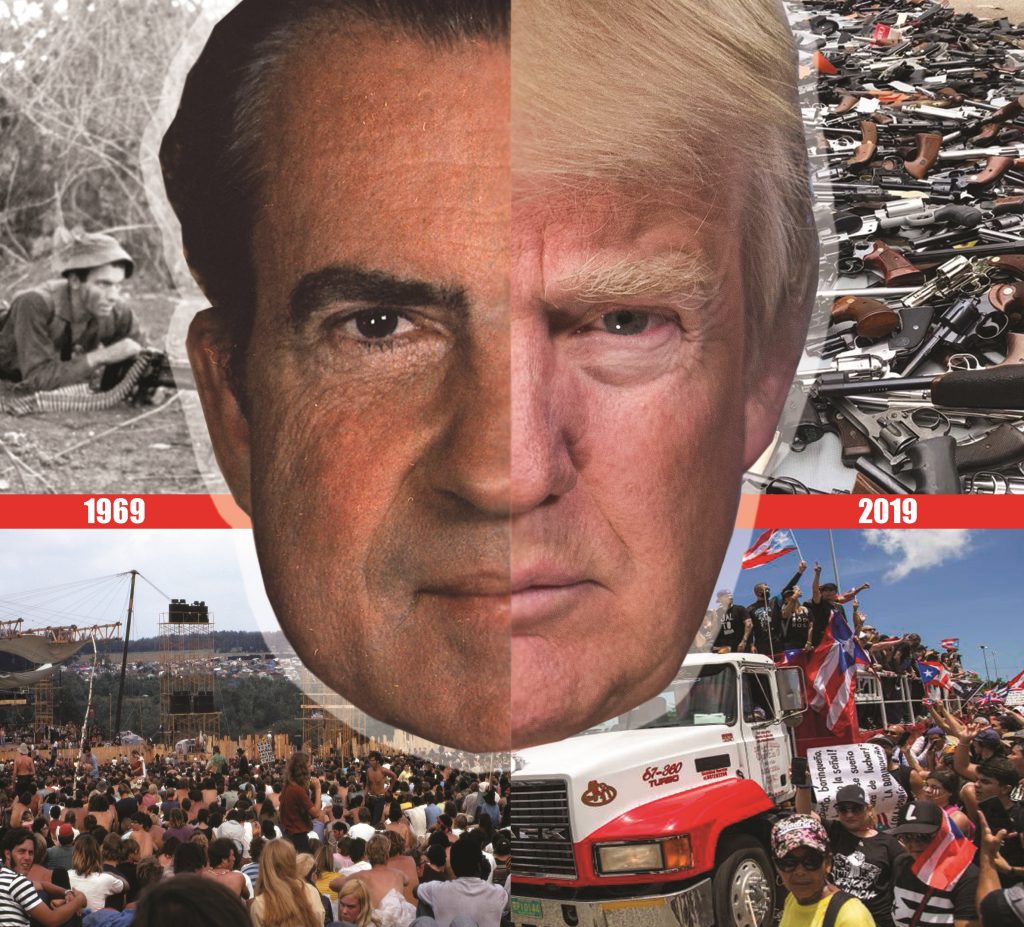 In this summer of half-century look-backs to the “Summer of ’69,” it’s natural to wonder: What will the summer of 2019 be remembered for 50 years from now?

Will the grandchildren of today’s Millennials wonder what took us so long to do something about the mass murders that continue to rip apart America’s communities?

Will they be proud that we turned away from climate catastrophe and chose a future of limitless renewable energy, or curse us for their rising seas and temperatures, and shrinking land masses?

Will they shake their heads at the blood-chilling chants of “SEND HER BACK!” at President Donald J. Trump’s North Carolina reelection campaign rally in response to his racist tweet attacks on four U.S. congresswomen of color?

Or will the darkness that seems to have fallen across the land fully enshroud them? Will their parents and grandparents — today’s youth — have healed from the psychological pain devastating so many lives in America’s opioid epidemic?

After near-daily traumas, Americans in the summer of 2019 certainly have plenty of reasons to feel psychological pain — and those reasons are hardly “only in their heads.”

There is good news, though.

Looking at today’s events in America through the “lens” of the “Summer of ’69” offers a remarkable reason for hope. Wrenching as it is, democracy in America continues to renew itself when Americans believe their elected leaders have gone too far and betrayed the nation’s fundamental values.

American democracy flashed like lightning in the early hours of Saturday, June 28, 1969, when the mostly young patrons of the Stonewall Inn in New York City’s Greenwich Village fought back against the police who figured it would be just another routine raid of a gay bar, another chance to rough-up the only people left without protection under the Civil Rights Act of 1964.

Over the next few days there were outbreaks of protest and shouts of “Gay Power!” in the streets and graffitied on Village walls. In the years that followed the LGBTQ community organized as never before, insisting the Constitution’s guarantees of “equal justice under law” and “the right of the people peaceably to assemble” apply to them, too.

To show their disapproval of the Vietnam War and the administration waging it, two-thirds of Brown University’s graduating class in June turned their backs when Secretary of State Henry Kissinger stood to address them.

Protests against the Vietnam War escalated after organizers met in Cleveland July 4-5 to establish a National Mobilization Committee to End the War in Vietnam. Record-breaking “National Moratorium Against the War” demonstrations burst out across the country on October 15. Anti-war Senator and 1972 Democratic presidential nominee George McGovern addressed the estimated 100,000 protesters in Boston.

Long after the summer of ’69 was gone, on December 7, the 5th Dimension — whose song “Aquarius/Let the Sunshine In,” from the musical Hair, hit No. 2 on Billboard’s Hot 100 for 1969 — appeared on the Ed Sullivan Show. The African-American pop group performed their song “Declaration,” with lyrics from the Declaration of Independence itself.

The song suggests it is still “the Right of the People to alter or to abolish [the government that “becomes destructive” of their unalienable rights], and to institute new Government, laying its foundation on such principles and organizing its powers in such form, as to them shall seem most likely to effect their Safety and Happiness.”

To win election in 1968, Richard Nixon employed the invidious “Southern Strategy” of winning over white Southerners by fanning their fears of African-Americans with racist tropes and dog-whistles.

Donald Trump, since his 2015 presidential announcement, has consistently and openly fomented racial and religious resentment, particularly toward Latinos and Muslims, by assuring his grievance-collecting white followers they are the only “true” Americans.

Five decades after the June 22, 1969, Cuyahoga River fire helped spark Nixon’s proposal for the Environmental Protection Agency, Trump has made every effort to cripple the agency. His EPA has permitted sharply increased logging and mining on public lands; pursued the lowest criminal enforcements of environmental regulations in 30 years; and even rolled back restrictions to allow coal-fired power plants to release more greenhouse gases into the air we breathe.

Fifty years after Nixon began to deescalate the highly unpopular Vietnam war in the summer of 1969, today’s Republican president is escalating a trade war against China, threatening war against Iran, and flinging bellicose taunts everywhere except at the one country American intelligence deems the greatest threat to our democracy, Russia.

Today it seems almost quaint to consider how riveted Americans were by the gruesome murders of five adults and an unborn child at the hands of Charles Manson’s followers over the weekend of August 8-9, 1969.

The Los Angeles Times got it right in a 50th anniversary editorial (“The Odd and Anachronistic Manson Nostalgia”) on August 8, 2019: “Enough murder nostalgia. We have our own mass murder problem, and we can ill afford to indulge in wistful or lurid looks back to a time when senseless mass killing was so rare that we could remember the names of the killers.”

In fact we’d already had more than 250 mass shootings across the country in the first seven months of 2019. For back-to-school shoppers, enterprising profiteers are peddling “bulletproof backpacks” for parents terrified to send their children to school because of the epidemic of gun violence that has gripped America.

In El Paso the killer told police he intentionally targeted Mexicans. His online rant echoed Trump’s own oft-repeated racist rant about an alleged “invasion” of Hispanics.

After Trump visited Dayton, Ohio, the city’s mayor Nan Whaley told MSNBC’s Lawrence O’Donnell, “Because of Trump’s rhetoric over the last three years, its hyper-partisan nature, it has put our community on edge.”

“Racist Go Home” and other protest signs greeted Trump in El Paso on Wednesday, August 8, when he and his wife visited the city.

Local residents interviewed on national TV said their fear and anxiety after the weekend shooting were now morphing into anger.

“People here are talking about politics,” said Maria Hinojosa, the Mexican-American host of NPR’s “Latino USA” show, to O’Donnell. “That’s not something people here did. It’s going to be a lasting impact, along with the trauma.”

Looking back at the summer of 1969, it’s important to remember it wasn’t only the trauma of the Vietnam War or the turmoil it caused at home that had a lasting impact.

The year also brought the Advanced Research Projects Agency-funded ARPANET that would become the beginning of the Internet. The first ATM was installed in the U.S., in Rockville Center, N.Y. The first 747 took flight in 1969. PBS was established. And the first artificial heart was implanted in a 47-year-old man dying of heart failure and waiting for a transplant.

For good measure, American astronauts on July 20 walked on the moon, taking, in Neil Armstrong’s famous words, “one small step for man, and one giant leap for mankind.”

Speaking with the astronauts from the Oval Office, President Nixon said, “For one priceless moment in the whole history of man, all the people on this Earth are truly one; one in their pride in what you have done, and one in our prayers that you will return safely to Earth.”

Over the weekend of August 15-18, more than 400,000 women and men gathered on Max Yasgur’s 600-acre dairy farm in Bethel, New York, 43 miles southwest of Woodstock, for “An Aquarian Exposition: 3 Days of Peace & Music.” While American astronauts had walked on the moon the month before, many festival goers flew higher than the moon on the mind-blowing drugs freely shared.

That summer, Americans, especially young ones, ramped up their protests against the Vietnam War — and against bigotry. They asserted their First Amendment rights to free speech, peaceful assembly, and “to petition the government for a redress of grievances.”

You might say democracy and freedom were bursting out all over.

Well, a look around in the summer of 2019 offers ample reasons to believe it’s happening again. Americans of all ages once again are asserting their rights to gather and speak out against unpopular political leaders and their policies.

Demonstrators in Puerto Rico in July succeeded in driving out Republican Gov. Ricardo Rossello. They learned what he was about after his chat messages were leaked, exposing bigoted and sexist comments and what protestors considered a disgraceful indifference toward the U.S. territory’s Hurricane Maria victims.

The island’s Supreme Court declared the swearing-in of Rosello’s hand-picked successor, Pedro Pierluisi, to be unconstitutional, and Justice Secretary Wanda Vázquez became Puerto Rico’s new governor on August 7, only the second woman to hold the office. It was uncertain how long this latest unpopular leader would remain in office.

“A general strike was declared on July 24, resulting in an estimated 1.1 million people peacefully protesting across the island,” reported the ACLU’s William Ramirez. “People affiliated with all local political parties, Democrats and Republicans, single mothers, the elderly, people with disabilities, all stood shoulder to shoulder with thousands of young people, the LGBTQ community, and women protesting in the streets.

“The crowd of protestors was enormous, over 500,000 occupying 12 lanes of the Luis Ferré Highway just in San Juan, the capital, and saturating other major towns and cities with people. To put the magnitude of the protest into perspective, close to one-third of Puerto Rico’s population was estimated to be present for the general strike.

“The protests went on for days and were sustained by the perseverance and creativity of our people. People danced, sang, and even went scuba diving in protest. People prayed, practiced yoga, and banged pots and pans all night in protest.”

After the Dayton shooting, women and men shouted down Republican Governor Mike DeWine when he attempted to offer the usual “thoughts and prayers.”

“DO SOMETHING!” they chanted and yelled.

The governor showed unusual dispatch in proposing 10 new gun regulations, though they were not expected to win support in the state’s Republican-dominated legislature — despite support by 90 percent of Ohioans.

Increasingly sickening news from the US-Mexican border about the treatment of migrants, separation of families, and caging of children has inspired outrage and activism from all parts of the country, including here in the Valley.

Sharon Lehmann of Granby recently told the Advocate she’s angry about the Trump administration’s border policies. “I can’t watch this,” she said at one point, turning to her partner. “I just can’t do this anymore. I have to do something.”

Like many others across the country outraged at the continuing humanitarian crisis at the border, she traveled to south Texas to offer food and comfort to those seeking asylum.

On June 24, as they were preparing for the trip, Americans were horrified by the Associated Press photo of 25-year-old Óscar Alberto Martínez Ramírez and his 23-month-old daughter Valeria, lying facedown in the Rio Grande. They drowned as they tried to swim across to the United States. The little girl’s arm was draped across her father’s back.

We can’t know what they’ll say about us 50 years from now. But we can know, here and now, whether we have tried to live up to our best — or settled for our worst.

The moon landing showed us 50 years ago what this country can do when we strive to live up to our best ideals.

Maybe instead of the horrors of 2019, this summer will be looked at 50 years from now as the time Americans reclaimed our democracy from those who twist and undermine it for personal gain.