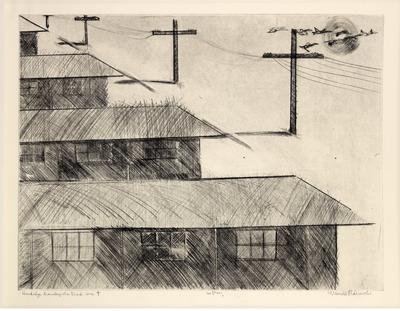 The Smith College Museum of Art has just opened a new exhibit on the late Japanese-Amercan poet and printmaker Munio Makuuch, who with his family spent much of World War II in an internment camp in Idaho for Japanese Americans. The artist, born Howard Takahashi in 1934, was strongly shaped by that experience and by other challenges, according to exhibit notes, but “the more obstacles he faced, the more defiantly he pursued his vision … this timely exhibition … serves as a reclamation of the artist’s visual and literary contributions.” 20 Elm Street, Northampton; open Tuesday to Sunday; $5 general admission, free for college students, Five College employees and family, youth 18 and under. — Steve Pfarrer

Elmer’s Store in Ashfield will be hosting its monthly open mic night this Saturday where you might find acts playing live local music, reading poetry or stories, or doing stand-up comedy. You never know what the next performer is going to do. Such is the beauty of open mics. An added bonus is that all performers eat for free and there will also be a secret audience vote with a winning participant getting an Elmer’s voucher, according to the event’s Facebook page. Elmer’s Store, 396 Main St., Ashfield. 5-10 p.m. — Chris Goudreau

From the Woods at Progression Brewing Co. // FRIDAY

Described as “groove-based Americana,” From the Woods is built on singer and songwriter Adam Braunschweig’s folk guitar riffs and harmonica that draw on country, roots rock, and blues influences. Braunschweig and long-time friend TJ Ezold, who plays the organ, went to Holyoke High together, and both went on to study at Berklee College of Music. Dan Bennett on bass and Ben Letcher on drums make up the rest of the outfit. They play a free, two-set show at Progression Brewing, 9 Pearl St., Northampton, from 7:30 p.m. to 10:30 p.m. — Luis Fieldman

The Lonesome Brothers are (Sessions alum) Ray Mason, Jim Armenti and Keith Levreault, and this band has been a staple in the Valley for a long time. They’ll be playing a free outdoor concert on Friday, Aug. 30 and the Sunderland Public Library. There’s not much of a better way to close out the summer and open up Labor Day Weekend than check out this trio’s folk/rock sound. And there will be food, as well! 6:30 p.m. 20 School Street, Sunderland. — Dave Eisenstadter