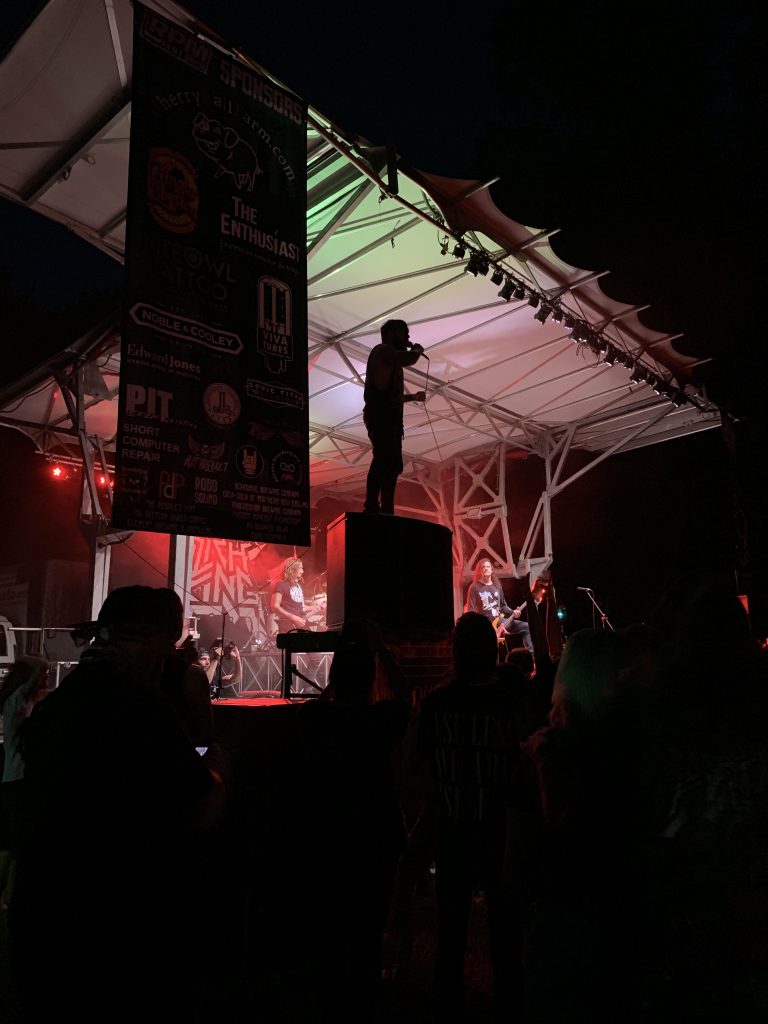 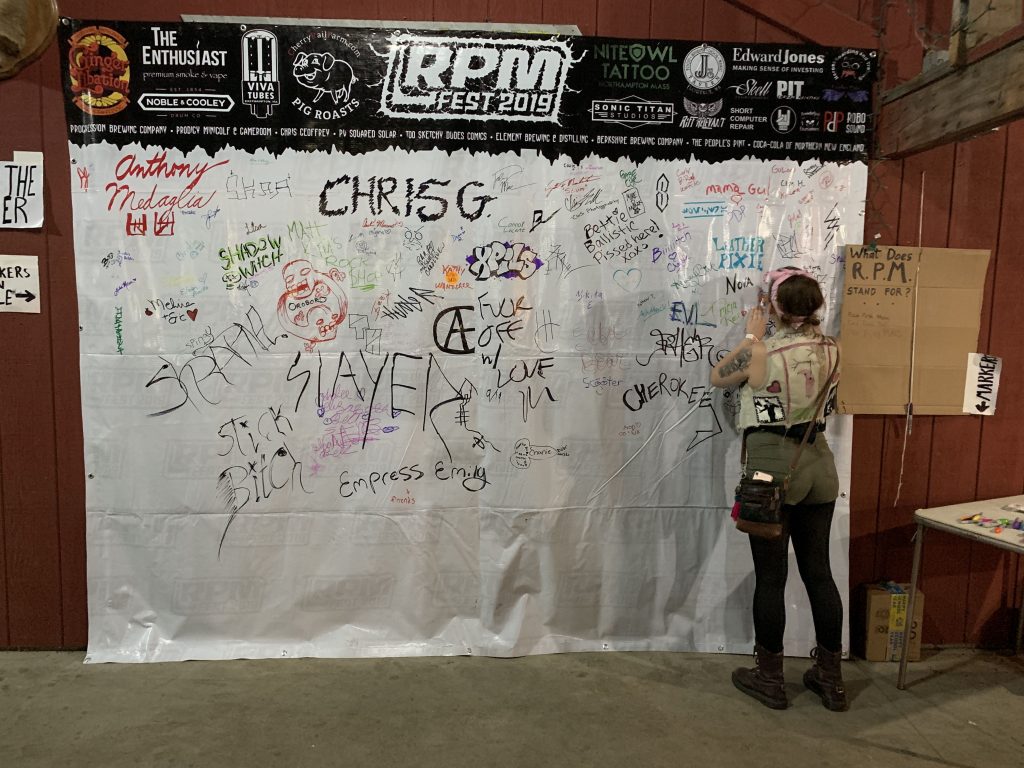 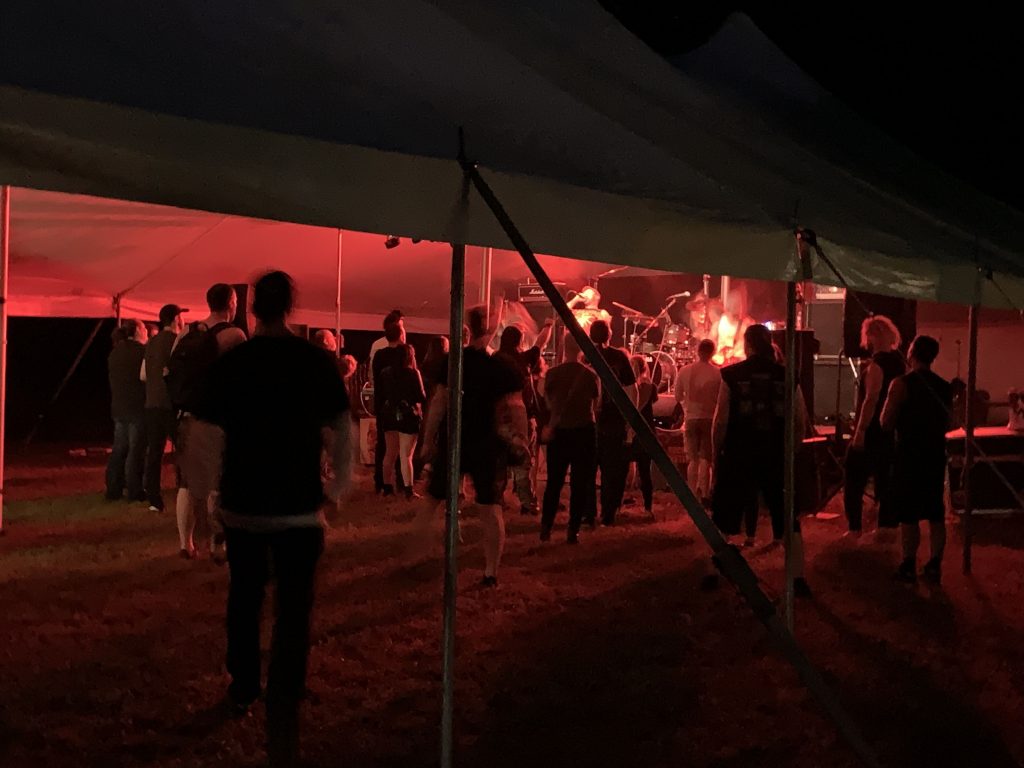 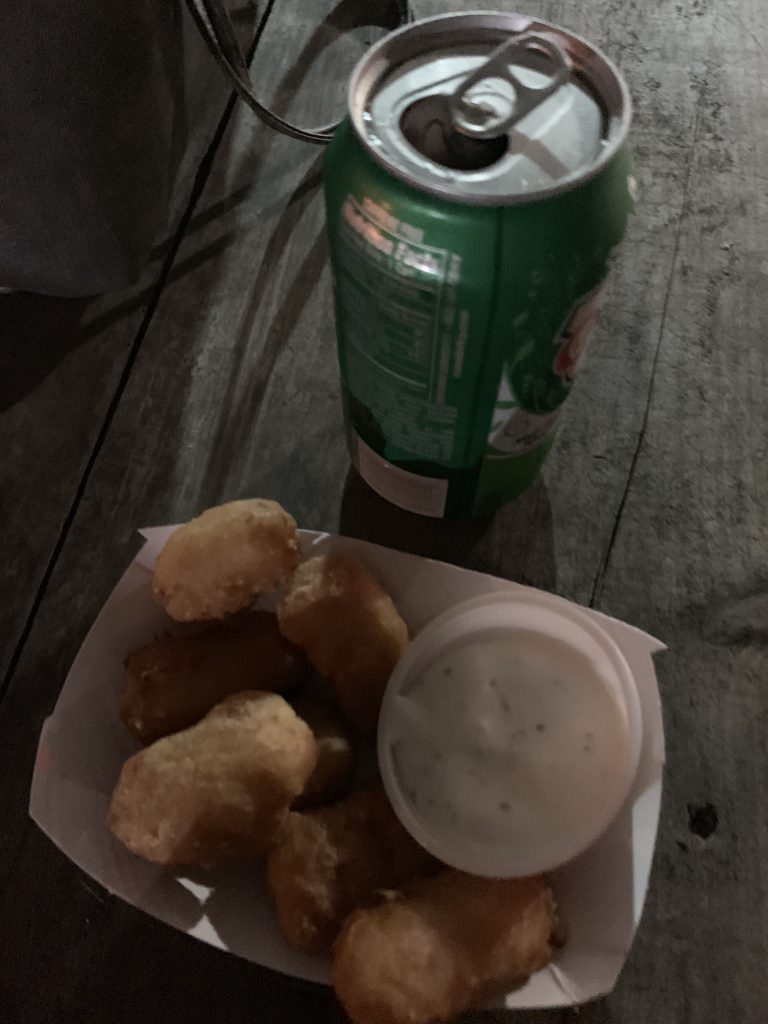 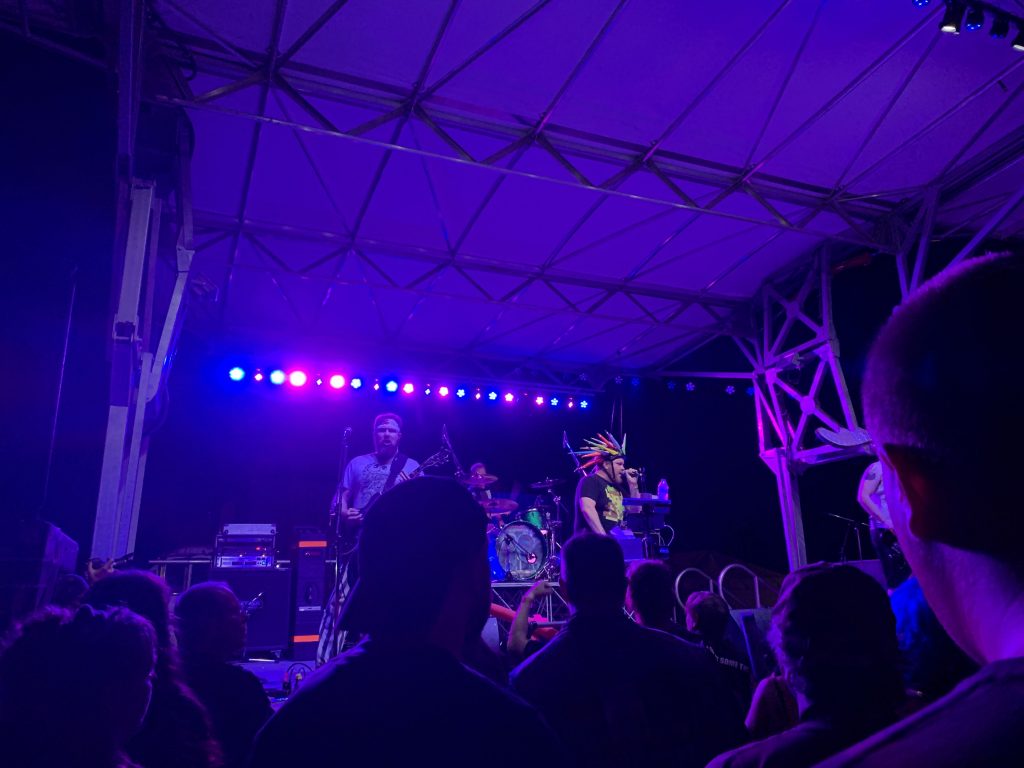 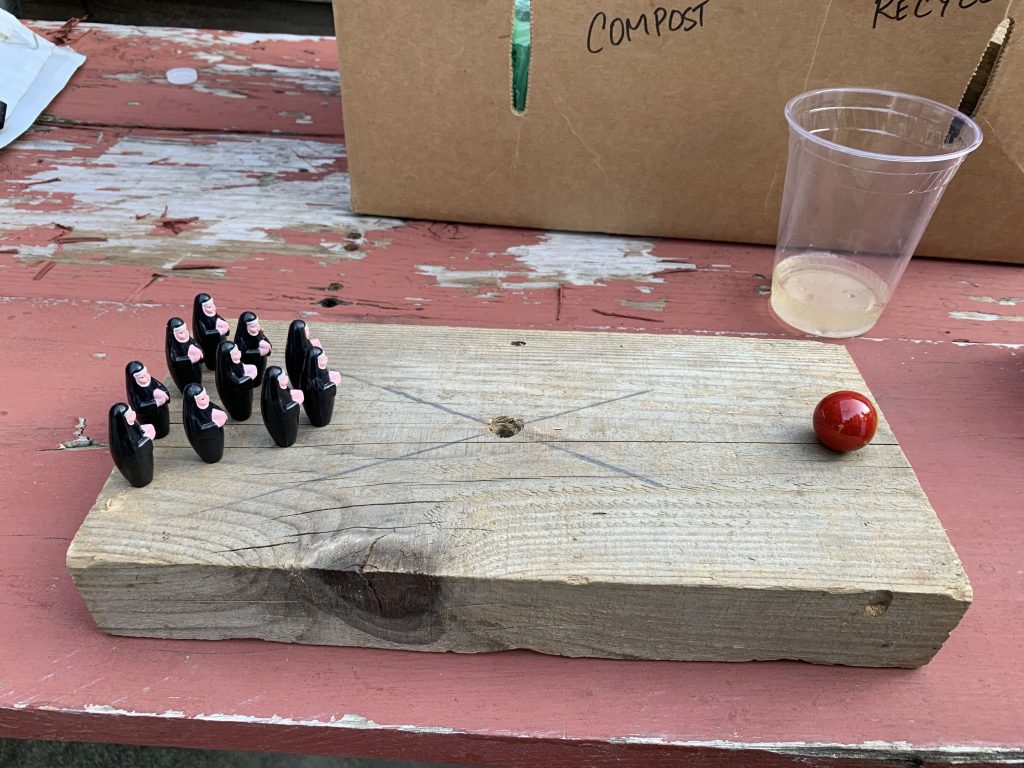 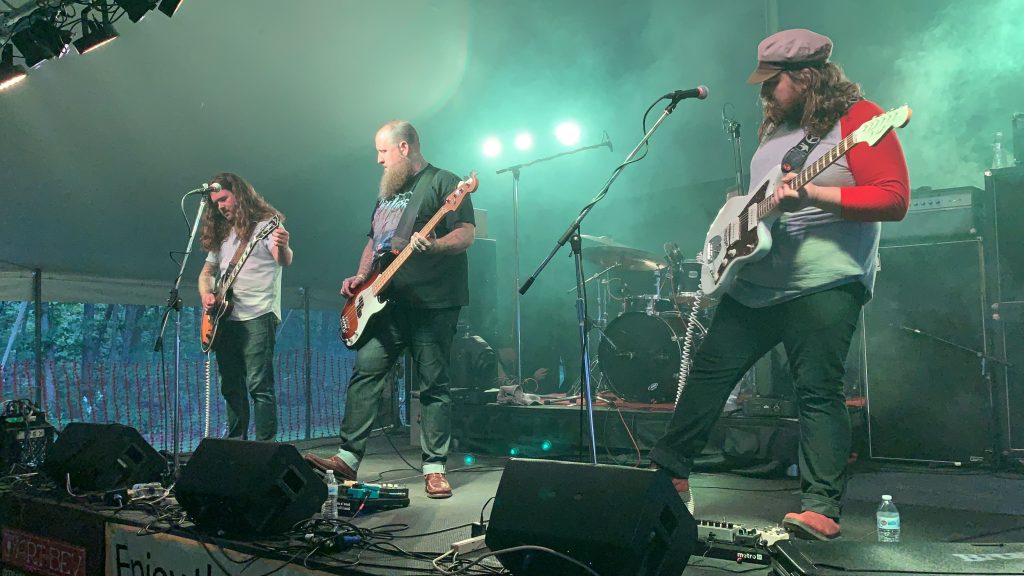 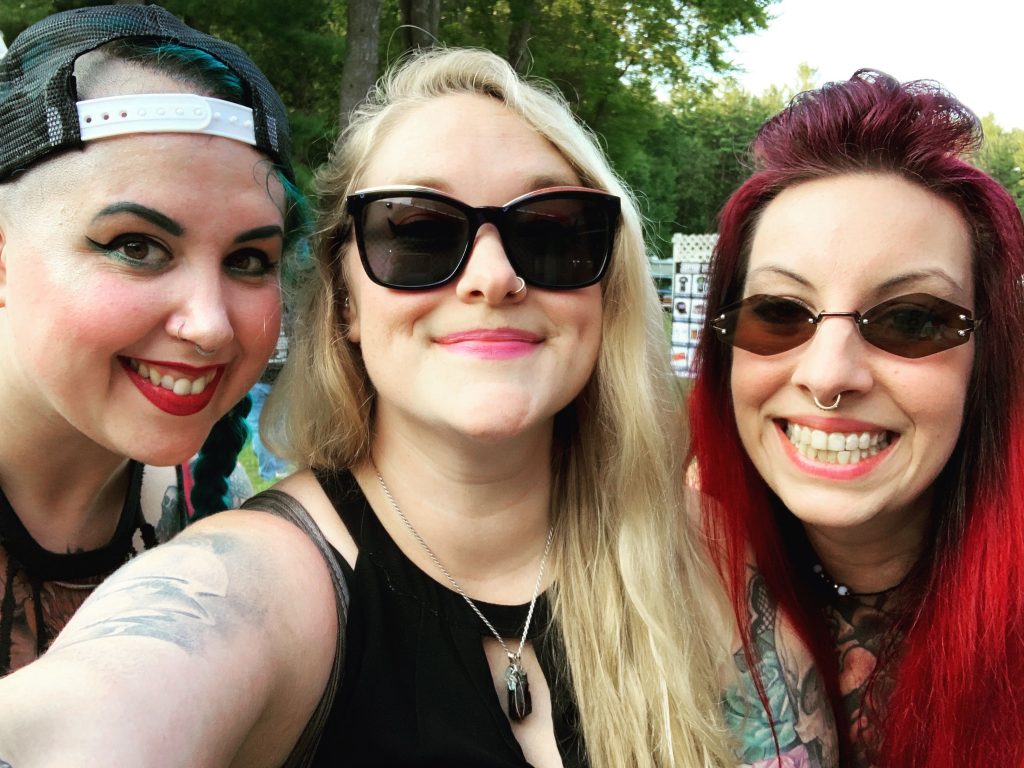 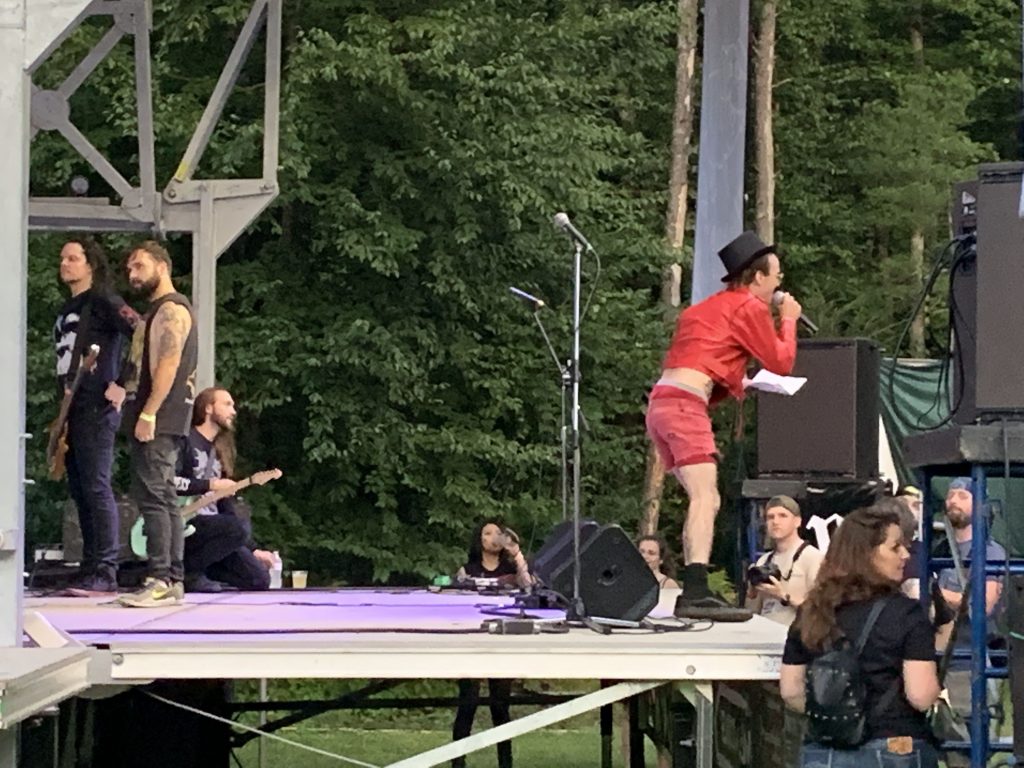 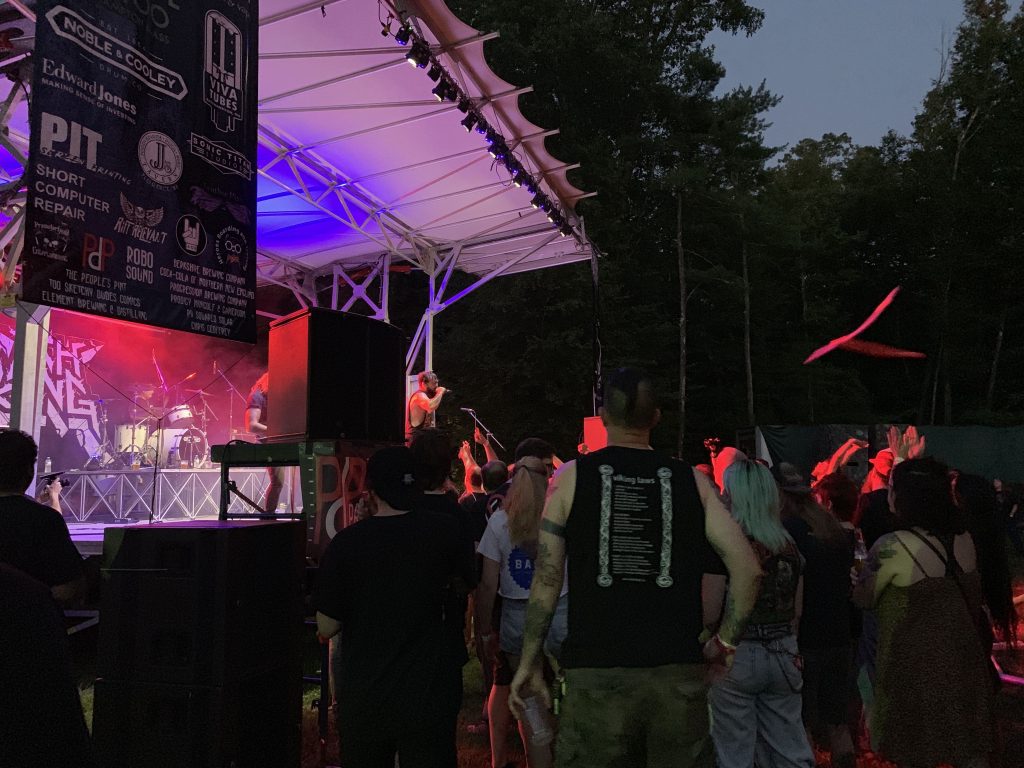 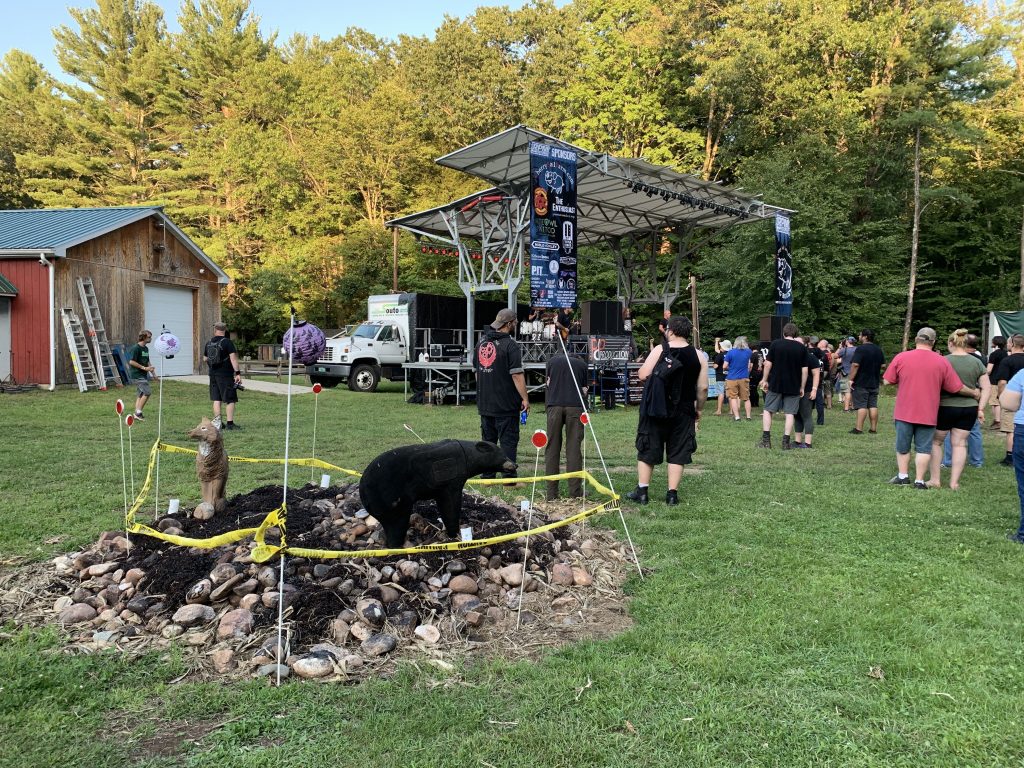 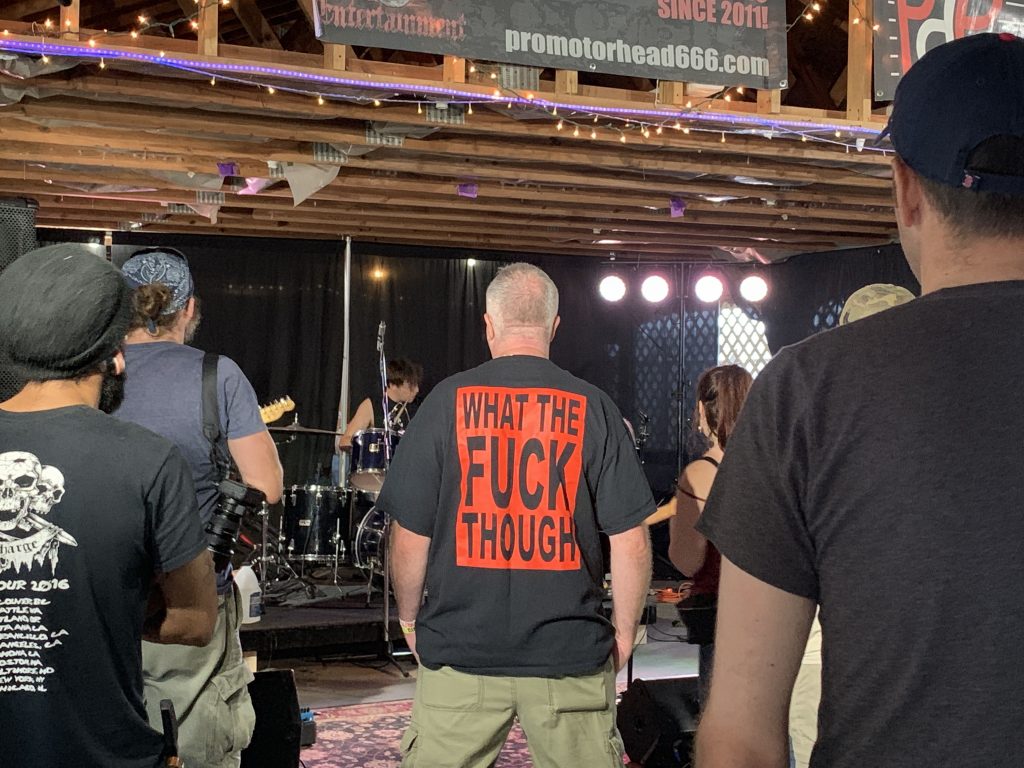 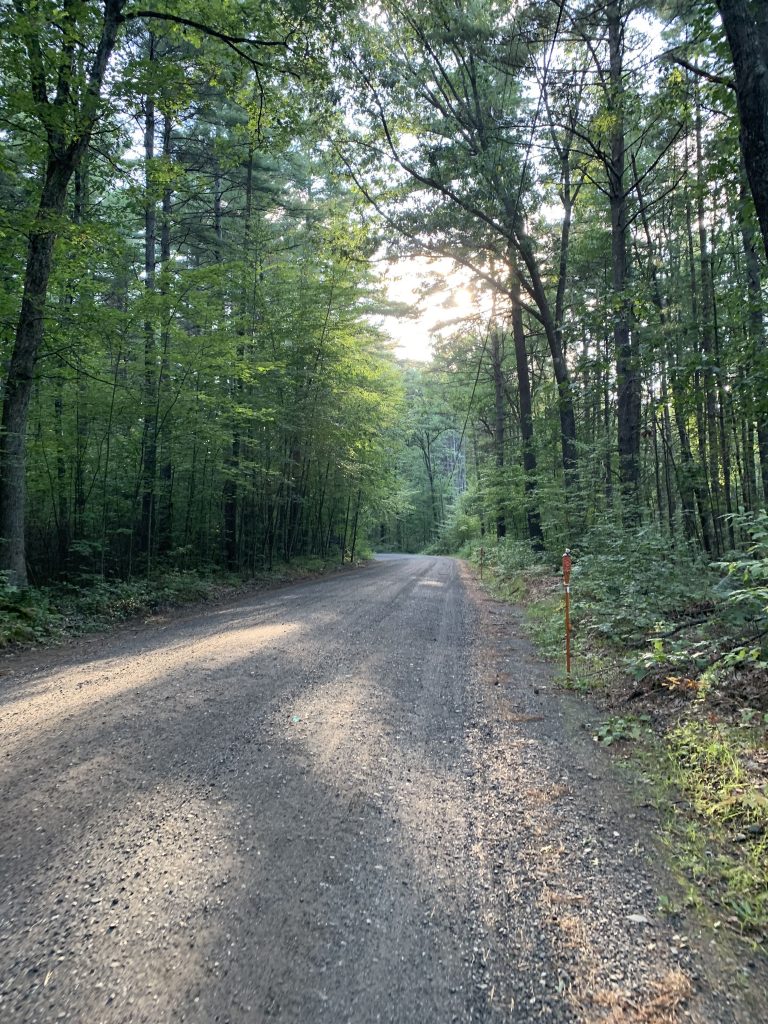 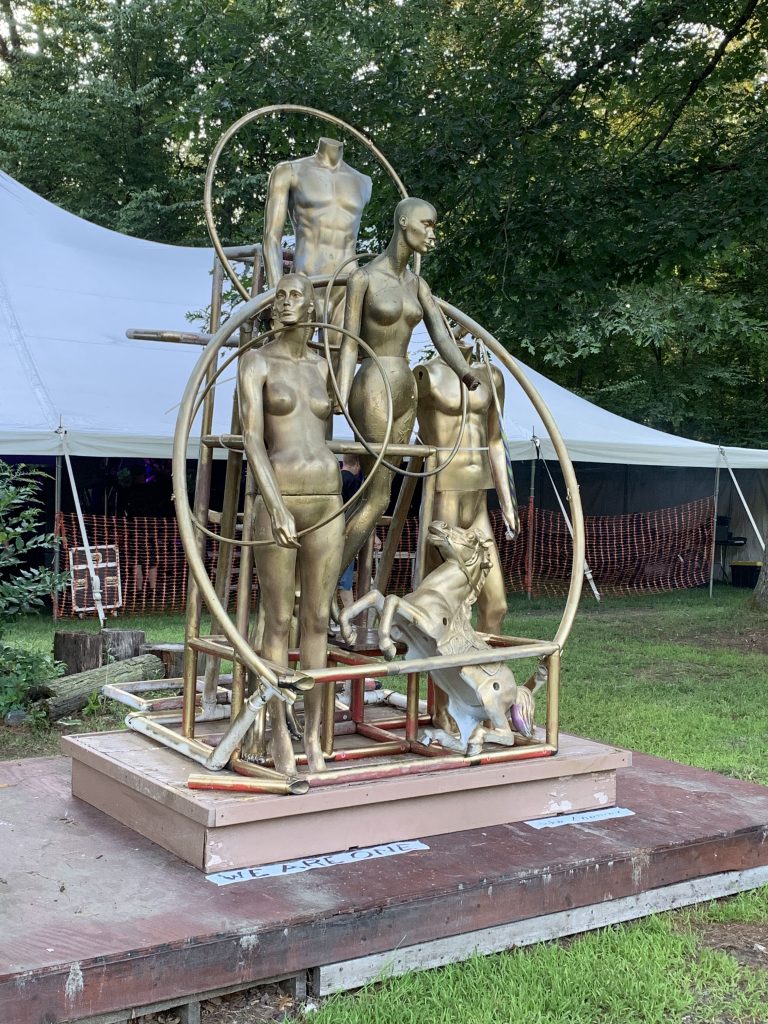 I walked down the forest path of the Millers Falls Rod & Gun Club for the opening night of the 5th annual RPM Fest. Once I got to the clearing, the field was open with people playing yard games, groups of others gathered in small huddles chatting and enjoying drinks. Western Mass’ power metal group, Thunderforge were playing on the Ginger Libations stage that from a distance, I could see was at full capacity, and the 3-day festival had just started.

I listened to the music in the background when I immediately ran into my two fave metal girls, Nicky and Charlotte. We played a quick game of nun bowling (little nuns as the pins with a tiny bowling ball) I gifted Charlotte who loves everything nuns. 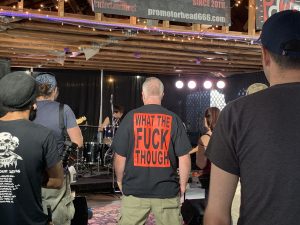 I sipped on a Ginger Libation while in the midst of the gathering of people dressed in black. “This is like Christmas,” I overheard someone say, and it was true. But instead of Santa to pose with, there was a gold painted mannequin sculpture you could tell your wishes to.

I headed over to the Cherryrail Farm stage. New York’s doom/stoner metal band Shadow Witch were ripping up sludgy riffs. I even saw a ponytail wip in the crowd, that was cool. The overlapping schedules for all three stages were amazing because you could catch every band playing without a hassle, and have time to check out all the vendors.

I, of course, had to get the kids back at home comic books from Too Sketchy Dudes Comics to match their Spider-Man and Spidergirl Halloween Costumes. And was super stoked to snag a cool Slime & Grimes print to frame for my new house, designed by RPM Fest/Promotorhead Entertainments’ own, John Gulow.

I made my way back to The Enthusiasts’ stage to finally check out OroborO. I’ve been wanting to check them out for a while. They reminded me of when Björk was an Icelandic post-punk goddess in various acts before she went more mainstream avant-garde. Comical banter in between songs and the energetic vibes were sent off like rockets into the audience.

Continuing my constant on-the-go move, I went over to check out North Carolina’s progressive metal band, Bask. They blew me away, their set was killer and I loved their riffs. Western Mass’ thrash metalists, Lich King, who also house RPM Fest’s co-founder Brian Westbrook on drums, were the party band of the night, for sure. There were circle pits with pool noodles, and the adrenaline from everyone in front of the stage ignited into the now almost black sky.

I caught a little bit of Thoughtcrimes’ set and they were heavy as hell. The red lights illuminating them on stage and really felt they were the belly of the beast.

I got so caught up with catching up with 2/3 of Left Hand Backwards that I missed New Hampshire’s Conforza. Or so I thought — then boom — they came on The Enthusiast stage just a little later than scheduled. And let me tell you, I love myself a female death growl. Insert heart eyes emoji here.

Once the sun went to bed and the sky turned dark, all the bodies walking around were silhouettes in the forest. I looked up and saw the clear sky, one more awesome thing to add to this fest. Stargazing on the new moon in Virgo.

I had to pick up the new vinyl release from Easthampton’s doom metal band, Problem With Dragons that were set to play on Sunday. Stay tuned for my next column for an interview with guitarist/vocalist Robert Ives as well as a review of this meticulous album I was lucky enough to get a sneak peek on. 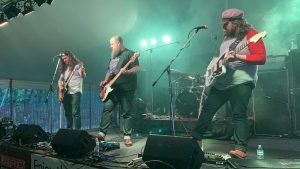 The headliner of the night was Chicago’s hardcore comedians Psychostick. They brought comical relief but with an added heavy factor that was very well there with a circle pit and all. They had an ode to Bruce Campbell, my eternal love of The Evil Dead rang through with that one. The puns were as sharp as their heavy riffs. Now I understand why the members of Left Hand Backwards were front of the stage and where they get some of their inspiration!

The night was ending and I realized I had forgotten to eat. I spent the last of my cash on mac and cheese bites from the Local food truck for a late dinner/snack. And I tell ya, mac and cheese for the win. I embarked on the same forest path back to my car, but at that hour, much darker.