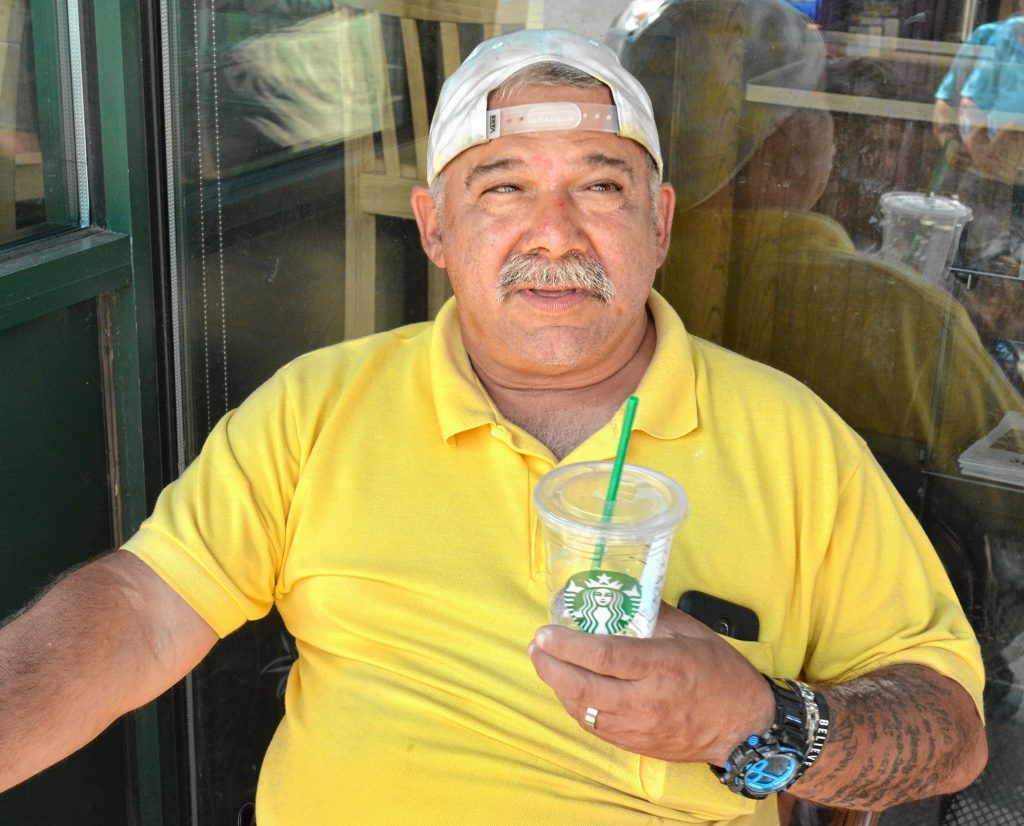 Rick Paiva, of Northampton, talks about vaping on Main Street in Northampton. He said he used to smoke and began to vape as an alternative to smoking, but no longer does either due to health concerns. 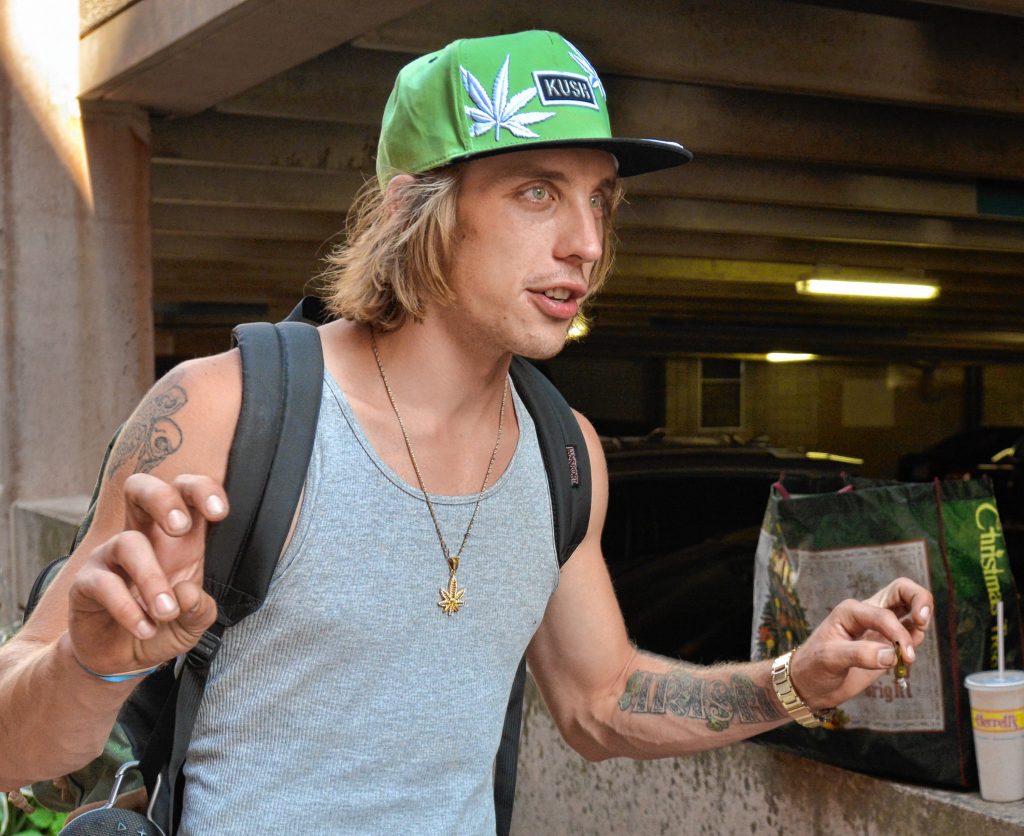 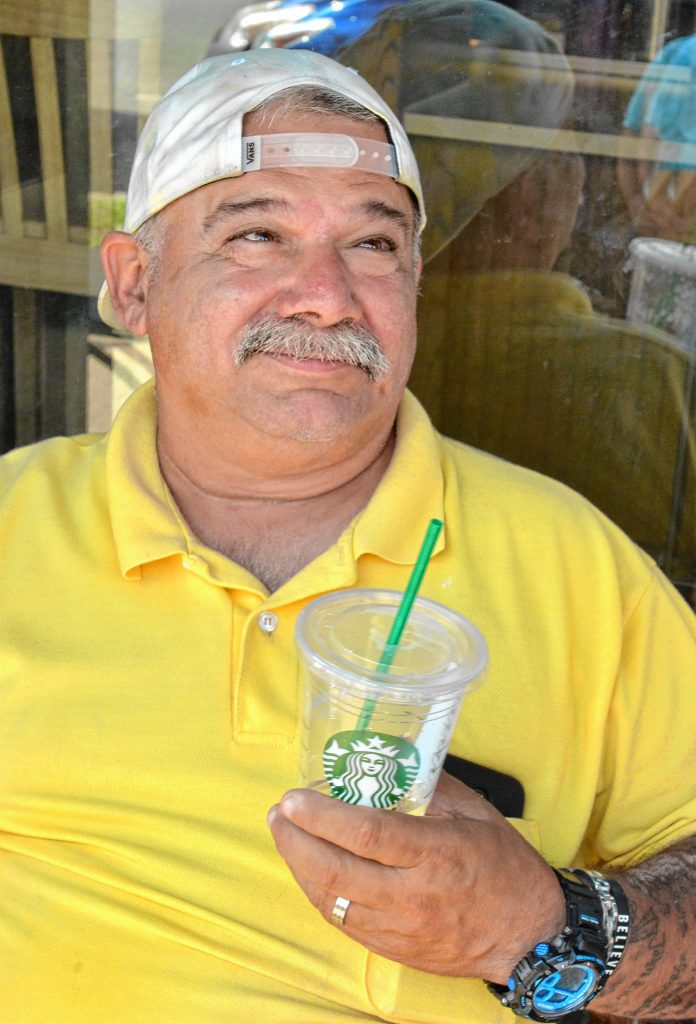 Rick Paiva, of Northampton, talks about vaping, Friday, Aug. 16, 2019 outside Starbucks in Northampton. He said he used to smoke and began to vape as an alternative to smoking, but no longer does either, due to health concerns. 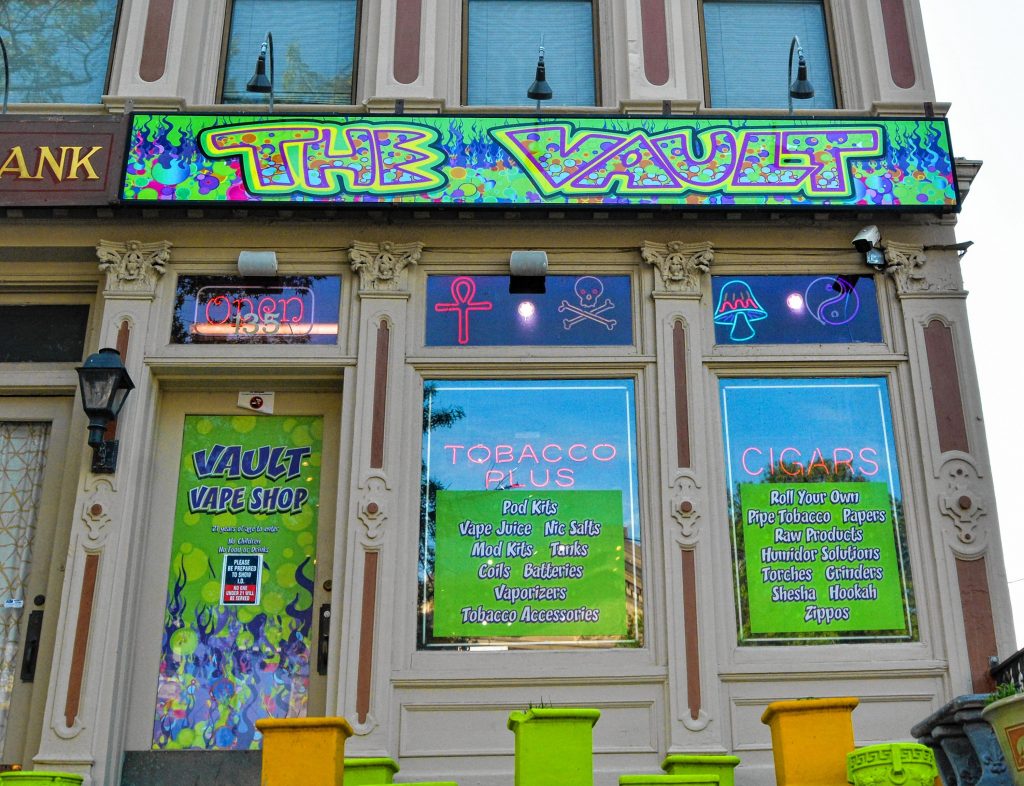 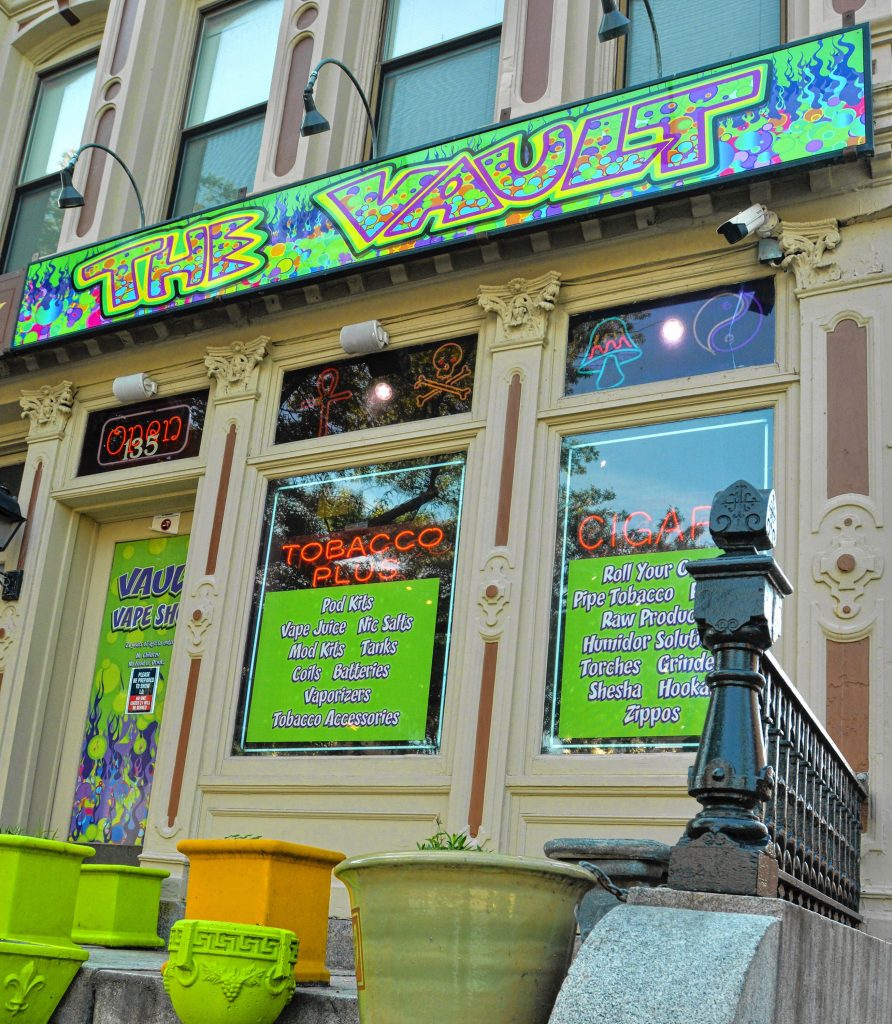 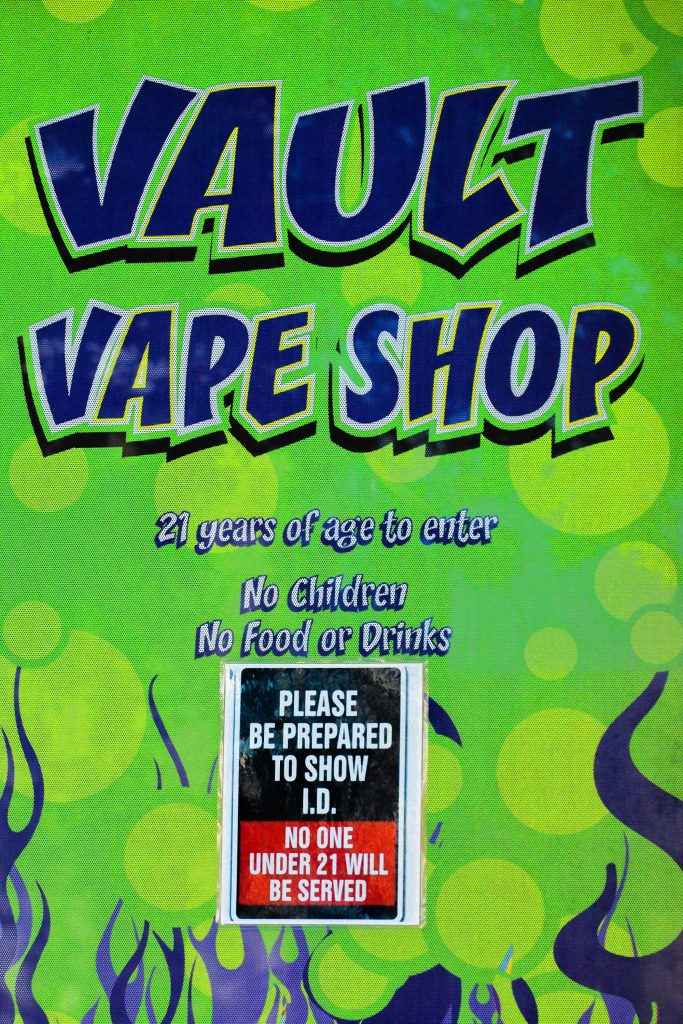 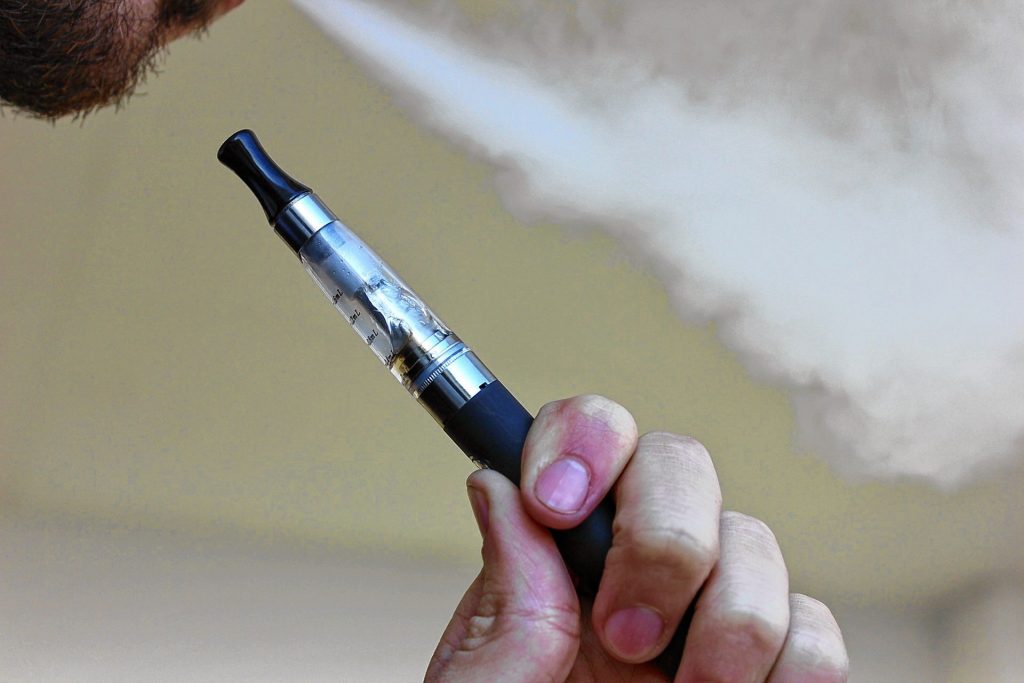 Rick Paiva, of Northampton, said he smoked cigarettes before switching over to vaping, but “it wasn’t helping my health any better.”

He quit vaping two-and-a-half years ago because he said it worsened his asthma, caused bronchitis, made his chest tight and caused him to feel dizzy. Since he quit, he said some of the ailments have gotten better, but they didn’t go away immediately.

“I breathe a lot better” since quitting, he said. “I can even smell things in the air.”

It turns out those who vape may be exposing themselves to greater risks of lung damage. Public health departments in the Midwest recently began investigating nearly three dozen cases of young people being hospitalized for severe respiratory problems that health experts are linking to vaping both e-cigarettes and cannabis.

Recently, the number of reported hospitalizations possibly tied to vaping spiked to nearly 200 people from 22 states, prompting the Center for Disease Control and Prevention (CDC) to investigate the potential link between breathing problems and the use of vapes.

Two weeks ago, health officials from the CDC announced the death of a patient in Illinois from a severe respiratory disease after reported use of vaping products.

“The tragic death in Illinois reinforces the serious risks associated with e-cigarette products,” said the CDC statement announcing the person’s death. No identifying information was provided for the patient. “Vaping exposes users to many different substances for which we have little information about related harms — including flavorings, nicotine, cannabinoids, and solvents.”

Other patients in Illinois, Minnesota, and Wisconsin have reported difficulty breathing, chest pain, vomiting and other ailments. Some suffered severe lung damage that required treatment in intensive care units.

“CDC is providing consultation to the departments of health in Wisconsin, Illinois, California, Indiana, and Minnesota about a cluster of pulmonary illnesses linked to e-cigarette product use, or ‘vaping,’ primarily among adolescents and young adults,” according to a statement from the CDC.

Neither Cooley Dickinson Hospital nor Baystate Medical Center has treated patients for lung problems relating to vaping, according to hospital officials. No cases have yet been reported in Massachusetts, according to Omar Cabrera, a spokesman for the Massachusetts Department of Public Health.

Mark Tidswell, a pulmonologist who works in Baystate’s critical care center, said that there was initial interest in the medical community about the potential of vaping as a means of getting people to quit cigarettes, but he added, “It’s still not clear that it helps people stopping.” Citing statistics from the CDC, he said 40 percent of people who take up vaping or e-cigarettes continue to smoke cigarettes.

“It’s inhalation of ultrafine particles, 10 nanometors or often smaller,” Tidswell said. “It leads to the deposition of particles in the lungs that are benign in liquid form, but when heated up, can undergo a chemical transformation that results in toxic chemicals.”

The heating elements of vaporizers might also release metals toxic to people’s lungs, he added.

Illnesses such as pneumonia were ruled out and no other general systemic problem could explain the lung injuries patients were being hospitalized with.

While some “unknowns” remain in these cases, Tidswell said that patients came in with a strong history of vaping, and now with the CDC investigating, more risks of vaping could be identified in the process.

An advocate in favor of providing people with smoke-free alternatives, such as e-cigarettes, made a distinction between licensed vaporized products and those that can be cheaply bought off the streets.

Alex Clark, the chief executive officer of the non-profit Consumer Advocates for Smoke-free Alternatives Association, said, “We are concerned that fake cannabinoid vapor products are being conflated with e-cigarettes — they are completely different.”

He contended that “cheap and poorly produced products,” rather than those sold at reputable retail stores, were more likely to blame for the hospitalizations. Considering that millions in the United States have used nicotine vaporizers in the past decade, he said, “this is the first time there have been any kind of reports like this, and by the numbers alone, it’s less likely that this is attributable to nicotine vapor products.”

However, “We don’t want to dismiss anyone’s concern because we do know that there are people both in the cannabis and nicotine market that are not following the rules,” he said. “It’s an area of concern for regulators, lawmakers and consumers.”

Thomas Mazuch, of Easthampton, said he uses marijuana vaporizers, but believes that nicotine vaporizers are worse for people due to the chemicals found in those products.

“Most don’t even know what chemicals are in it,” Mazuch said, adding that the wide selection of flavors available are targeting young people.

“There is every flavor you want out there,” he said, listing off strawberry milk, grape and fruit loops as aimed towards teens.

In Massachusetts, a ban on selling tobacco products to people under the age of 21 began at the start of 2019, and last year, Attorney General Maura Healey launched a broad investigation of the e-cigarette industry.

The investigation has resulted in three cease and desist letters sent to Eonsmoke, DirectEliquid, and Kilo E-Liquids, who no longer sell to Massachusetts residents.

A complaint filed in May in Suffolk Superior Court alleges that Eonsmoke, a New Jersey company, violated Massachusetts laws by targeting underage consumers through its marketing and advertising, and failed to verify online buyers’ ages.

“Eonsmoke took a page out of the Big Tobacco playbook by peddling nicotine to young people on social media,” Healey said in a statement announcing the lawsuit. “Our investigations into Juul and other e-cigarette retailers continue as we seek to hold companies accountable for marketing these addictive and dangerous products to minors.”

In Hampshire County, eight communities have implemented policies aimed at curbing vaping among young adults and teens. Amherst, Easthampton, Granby, Hadley, Hatfield, Northampton, South Hadley and Southampton all restrict the sale of flavored tobacco products, a measure advocate groups and politicians have advocated for on the state level.

The sale of flavored tobacco products has been prohibited in Easthampton at nearly all establishments, a rule that went into effect on January 1, 2018.

Bri Eichstaedt, Easthampton’s health agent, said the policy is in response to advertising tactics by e-cigarette companies in particular because the flavored tobacco is “typically targeted to children.”

Convenience stores, even those that sell tobacco, cannot sell flavored tobacco products in Easthampton so that children and young adults are not exposed to those flavored products, Eichstaedt said.

Stores licensed as adult-only retail tobacco stores — there is only one in Easthampton — can sell flavored products, but Eichstaedt noted identification is required before entering the store, thereby banning minors from entering.

Garcia said that not only is there an uptick among teens using e-cigarettes and vaporizers, but it actually increases the risk of them using cigarettes as well.

“Because adolescents and teens minimize the risk of nicotine in vaporizers, they are getting addicted earlier,” Garcia said.

Flavored e-cigarette products in particular are contributing to the problem because “quite a large percentage (of teens) do not know that they have nicotine” in them.

The state attorney general has also made that claim. In April, Healey said at a forum at Newton High School that “many (teens) have no idea that they’re taking any health risk at all — up to two-thirds think they are just vaping flavoring.”

Compounding the issue, Garcia said, is that there is a larger quantity of nicotine being inhaled through vaping than cigarettes. One pod can be up to 20 cigarettes, according to Garcia.

“Prevention is key,” Garcia said in terms of tackling what health officials have declared as a vaping epidemic. “It’s a lot easier to prevent addiction than to try to treat it.”