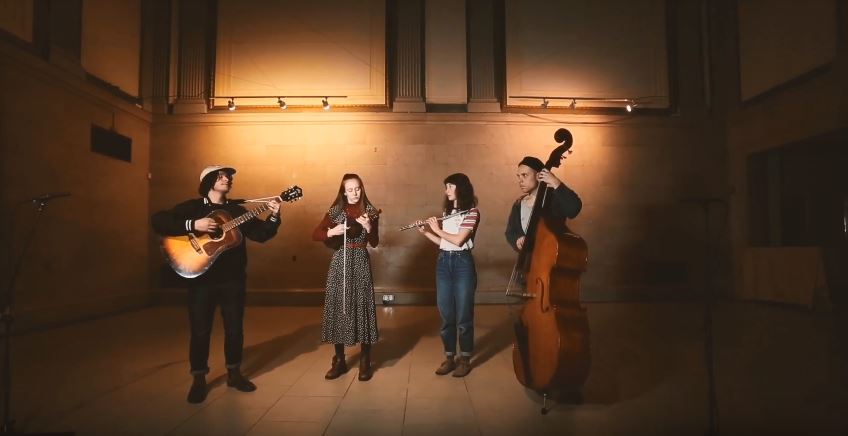 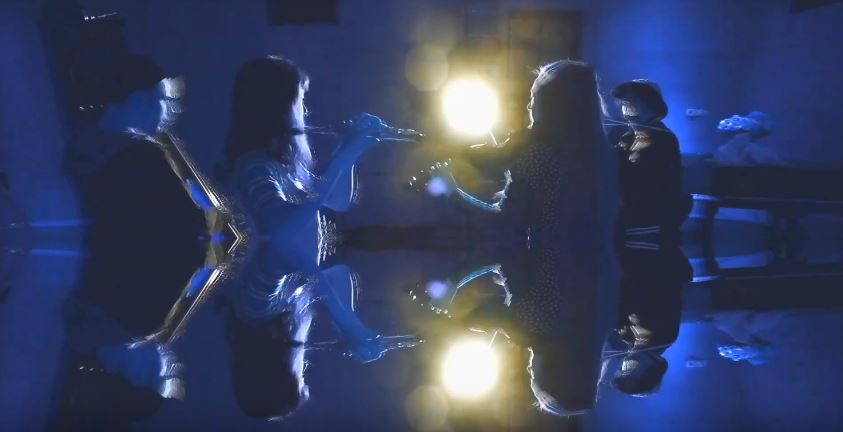 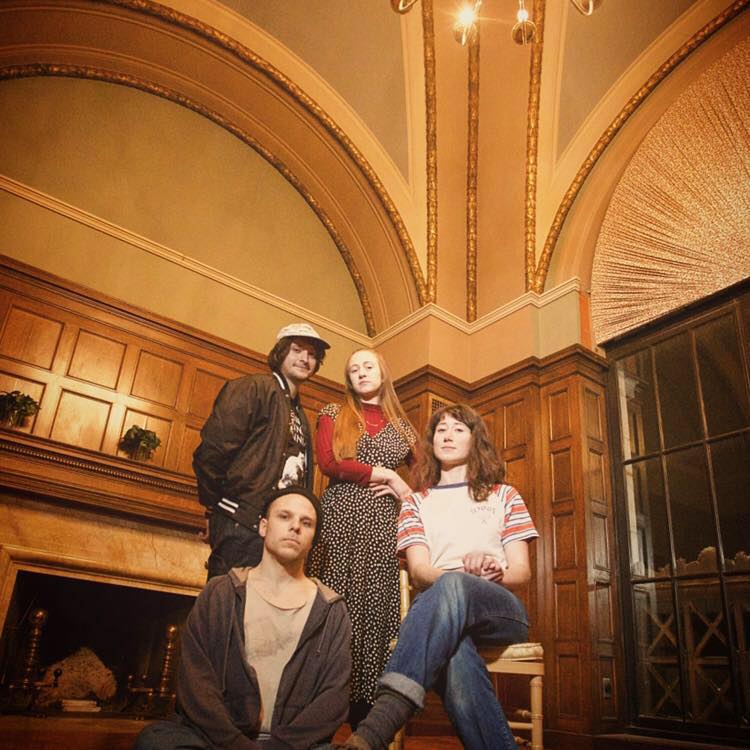 The lush pastoral sounds of acoustic guitar, flute, fiddle, and upright bass echoed in slow motion through the Pushkin Gallery in Greenfield, before returning to normal time in an effect that’s much akin to rewinding an old VHS tape and hitting play. From there, the gently whimsical and mellifluous psychedelic folk vocal harmonies of local band Sweet Lightning began to take shape.

Throughout the debut music video of the band’s song, “Dreams of Figs,” the group is transported away from the open gallery space to a trippy, dark-blue-tinted dreamscape, with members partially disembodied beside their instruments while heart-aching melodies soar. 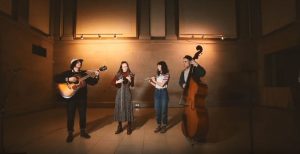 This past winter, the members of Sweet Lightning were filmed at the gallery by Ben Goldsher of Hawks & Reed Performing Arts Center in Greenfield, but decided to release the performance in early September, several weeks before the band is set to take the stage at the Arcadia Folk Festival in Easthampton on Sept. 28. 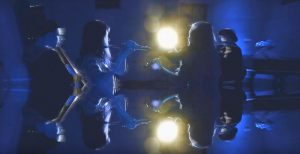 Though the band is relatively new to the Pioneer Valley music scene (they started making music together for more than a year and a half ago), its members have played in acoustic groups and rock bands throughout Western Massachusetts.

“Having guitar provide the chordal foundation and having two melodic instruments [flute and fiddle] be able to interact with each other seemed like a really awesome thing,” Camarano said. “I’m not a shredder by any means. I like writing songs. I love sitting down with a progression and writing a melody. But I’m not going to rip a crazy solo in the middle of a song, but Lily will because she shreds.”

The band started back in January 2017 after Camarano and Jacco started jamming together as roommates, playing material that Camarano had been writing over the years as what he calls a “closet songwriter.” The duo decided to start a band and later brought Sexton and Leslie into the group.

“I got a text one day from Gabe that was like, ‘Do you want to be in a band with me?’ And I felt really honored,” Sexton explained.

Camarano said most of his songwriting blends stream-of-consciousness lyrics that often explore his own thoughts and emotions.

“It’s really compelling, particularly the way that Gabe writes,” Sexton said. “I feel like his lyrics are extremely poignant. It can get intense, but there’s definitely more upbeat songs that have higher energy in them, but lyrically they’re very compelling emotionally and I think relatable.” 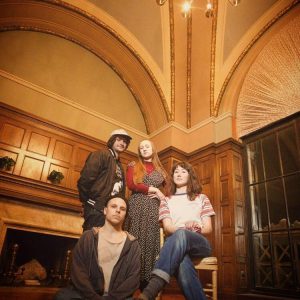 For members of the band, being able to play on the same bill as folk singer-songwriter Anaïs Mitchell, who recently won a Tony Award for Best Musical for the Broadway adaptation of her 2010 folk opera “Hadestown,” is a gig they’re most excited about.

The next step for Sweet Lightning is to record an 8-track album. Right now, the band is working on demos before tracking the record. “Ideally we would take the fall to finish a record and by spring release it with somebody and do a tour,” Camarano explained.

Beyond that, there are plans for Sweet Lightning to evolve as a group by essentially being two bands in one.

“We could be this more acoustic folky group by day and a rock ‘n’ roll band by night and sign with a label for the acoustic set-up and then sign with a completely different label. We could release the same album twice under different labels and to different audiences. The songs work both ways,” Camarano said. “I’m really excited by the potential of that.”

For more information about Sweet Lightning visit the band’s Facebook page at www.facebook.com/sweetlightning22. To learn more about the Arcadia Folk Festival visit www.arcadiafolkfest.com.