The Beerhunter: Caleb Hiliadis Takes the Lead at Amherst Brewing 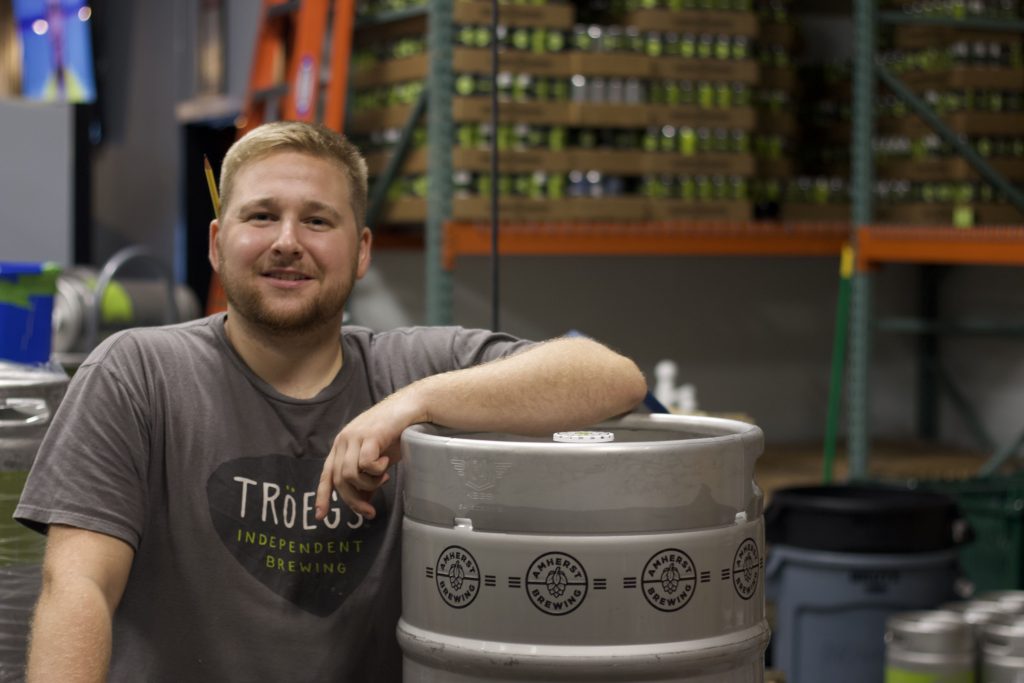 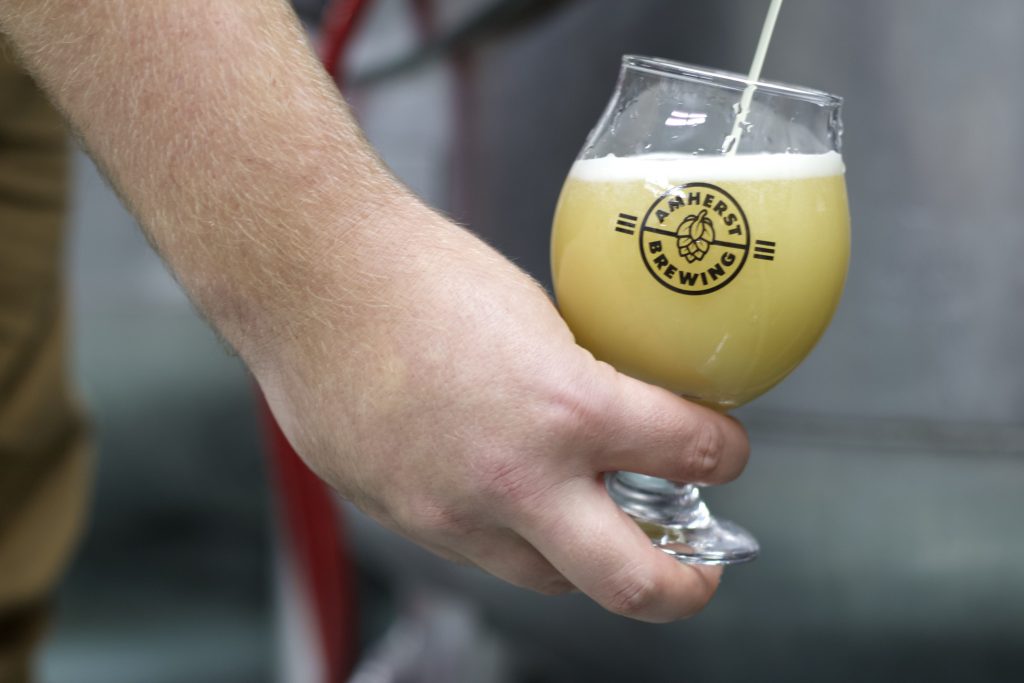 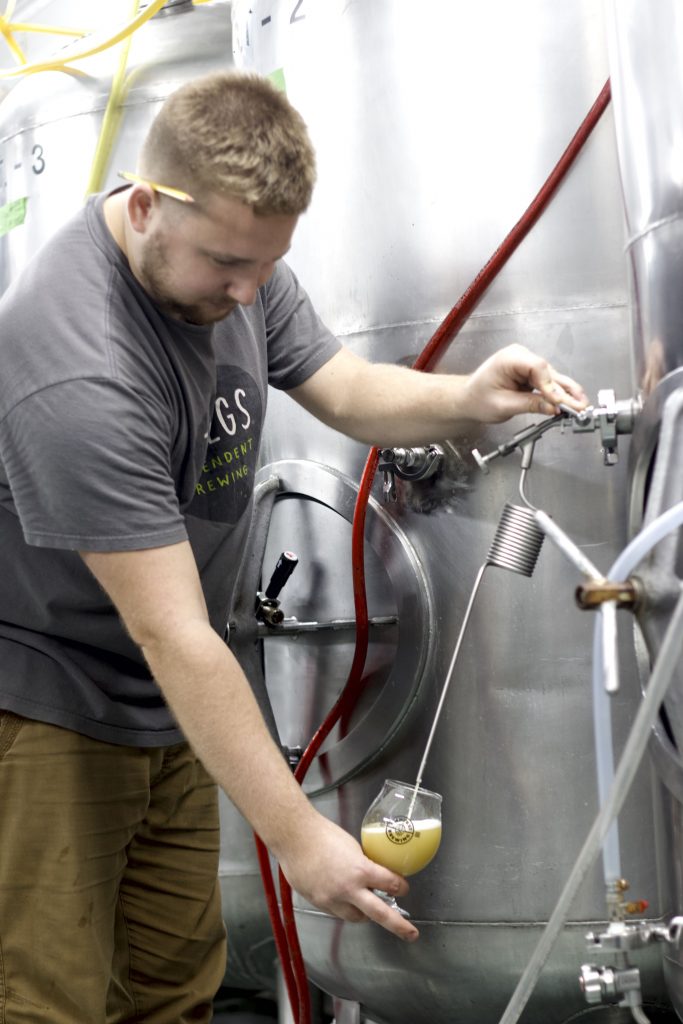 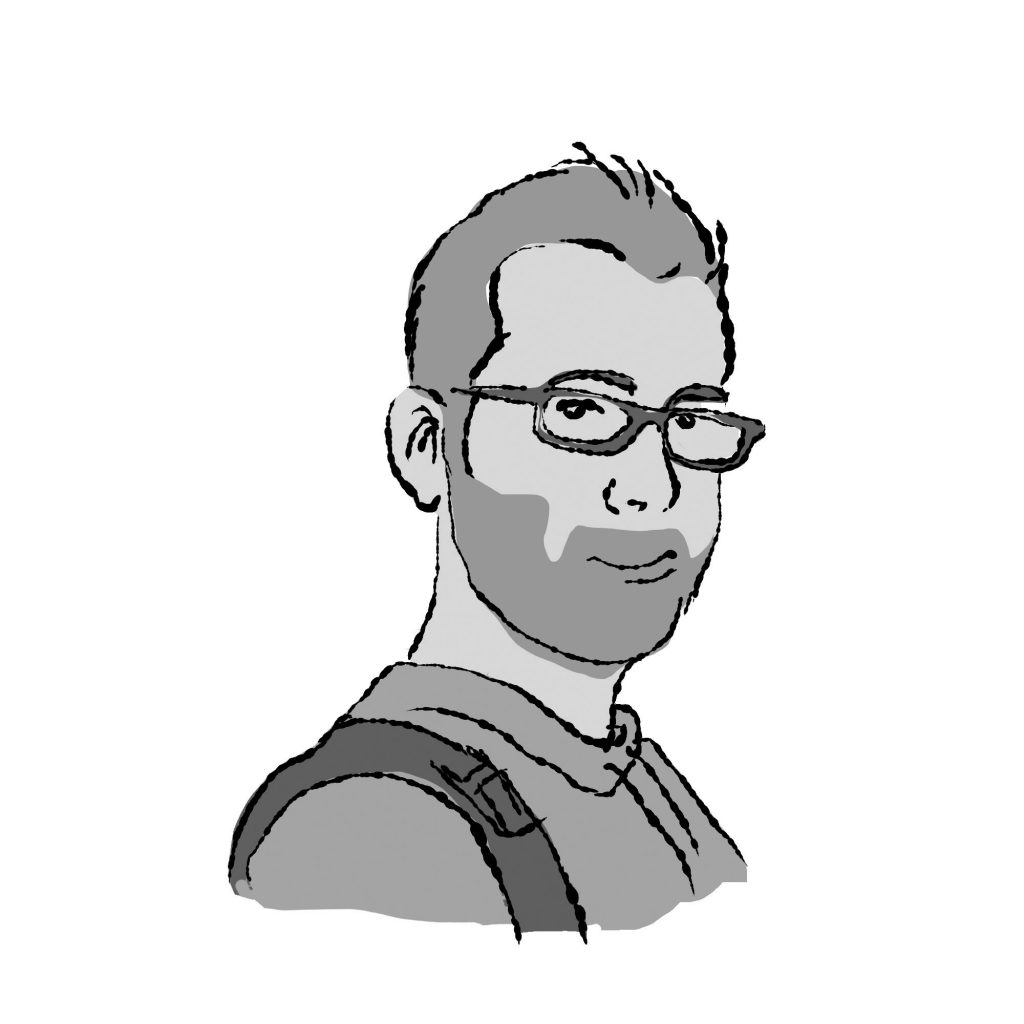 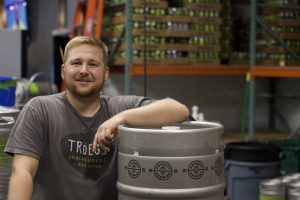 Well, not the whole joint — just the brewhouse. But that brewhouse has evolved through many twists and turns over the years. And the beers coming out of 10 University Drive these days seem, at least to this Beerhunter, more playful and confident than ever.

Hiliadis took a part-time job at the brewery about five years ago, cleaning and filling glass growlers two days a week. It was his first job in the brewing world. Soon after that, in early 2015, Amherst Brewing Company owner John Korpita announced a partnership with Harold Tramazzo, the owner of the Hangar Pub and Grill and the Wings Over restaurant chain.

Tramazzo took over all brewing and restaurant operations at Amherst Brewing Company, but left the brewing team in place. Hiliadis became assistant brewer under John Geraci, then was promoted to head brewer this summer, allowing Geraci to focus on other projects.

These days the brewery, now known simply as Amherst Brewing, is producing roughly 3,000 barrels of beer per year, led by Hiliadis and three other full-time brewhouse staff. They’re still on University Drive, housed in the Hangar’s Amherst restaurant, but there are now Hangar locations in Greenfield, Westfield, and Pittsfield as well, with two more locations set to open soon in South Hadley and Agawam — which means a growing network of dedicated taps for Amherst Brewing to keep stocked.

That seems plenty complicated to me. Luckily, Hiliadis came up in restaurants. And for a young brewer juggling the demands of a brewery pumping product to multiple pubs — as well as distributing cans and kegs to stores and restaurants statewide — he’s a pretty unflappable guy. Seems like you’d have to be. 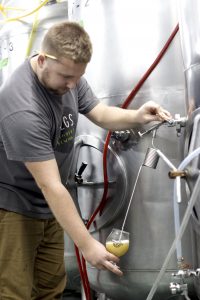 I sat down with Hiliadis last week at the brewery to learn more about his new role. This interview has been edited and condensed.

Beerhunter: It’s been an action-packed few years at Amherst Brewing, including your promotion this summer. How has it been, planning for what’s next?

Caleb Hiliadis: It feels different here now than it did a few years ago, but a lot of that has come from Harold [Tramazzo] saying: I’m not the brewer —you guys are. So, what do you need? We’ve gotten his support and guided it from there. But the pace of the industry has changed so much. You have to stay current constantly.

BH: A lot of new breweries have opened locally in the past five or six years, but very few of them have a restaurant component like you have here, operating alongside the Hangar.

CH: Yeah, we have a brewpub license, which has its advantages and disadvantages. Like this year, for maybe the first year ever, we’re not brewing an Oktoberfest. We’ve tried to retain what Amherst Brewing Company was as we move forward, because it’s so important to us. But, every giant craft brewery is making an Oktoberfest right now. There are so many good options out there. But we have bars, and ours bars carry beer from other breweries as well. So it’s not like our customers are walking into a taproom looking for a lager and there’s only two options for them. That kind of flexibility has been good for us.

CH: It frees us up to test things out that take a lot of time, resources, and research. Like our kettle sour program. We found the chances to really test it with our audience at the bar, and I think we’ve been wildly successful with those.

Also, each Hangar location is different, in terms of what people are drinking. We have it structured so that each bar orders beer from us, which helps us keep track of what people like. I’m so involved in the technical brewing side of things that I don’t necessarily think sometimes that the consumer might want something totally different. If you’re so insulated that you’re not thinking about the people who are actually drinking what you make, that’s a problem.

Some people come in for lunch every day of the week. If something was off with a batch, or they liked something new, we hear that from them immediately. It’s invaluable. And because we have food, we can get pretty much anyone coming in. Some like craft beer and some don’t. It’s important to be craft-centric, but welcoming everyone is super important.

Not everyone wants to drink beer all the time. Not even me. When I go out, I always liked to drink wine, and I didn’t think about beer at all until I tried Belgian beers. That was the bridge for me. It had acidity, and complexity of flavor. It wasn’t a warm can of PBR at someone’s house.

BH: How did that lead you to a job as a brewer? 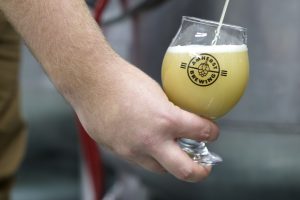 CH: I grew up in the Berkshires. When I was young, I wrote for an arts blog, and I went to school at MCLA [Massachusetts College of Liberal Arts], then got a job at MASS MoCA. A friend of mine was opening a restaurant in North Adams called Public Eat + Drink, and wanted to make it a craft beer-focused bar. I worked there, and that’s where I had my first Saison Dupont and really got into beer. I started homebrewing with a friend. It wasn’t great at first, but I wanted to become confident enough to take someone on a journey with the beer I made. So I fell in love with it.

BH: I can see how your bar serving and front-of-house experience would make you a good fit for this place, even though it was changing at the time.

CH: I think so. When I started here, I would spend all day standing in the cooler, filling growlers from tanks. I would pop in a beer podcast and learn whatever I could, which the people around me encouraged. I’ve never done a formal education in brewing, although I go to craft brewers conference and seminars now. But a lot of education is about access, getting your foot in the door, and I think I was in the right place at the right time with the right mentality.

BH: Does it feel like much has changed at Amherst Brewing since then?

CH: Well, there are probably a couple of pieces left over from when the Hangar was moving in, but we’ve upgraded pretty much everything in the brewhouse. All the tanks, the glycol unit, the CO2, the new canning line. We had to upgrade. We literally couldn’t make the stuff we wanted to.

CH: First we needed a conical fermenter to replace some old tanks that had a dish bottom. They didn’t chill well, and collecting yeast from them wasn’t an option. Neither was dry hopping. Now, I don’t think we’re able to get any more tanks in this building, so I’m looking for more innovative ways to increase production. We’re brewing a double IPA right now with Night Shift Brewing that uses Valley Malt and a Norwegian farmhouse strain of yeast called kveik. It’s like a super yeast — it can be fermented at 90 degrees, which is 30 degrees warmer than most yeast strains, and with certain techniques you can get more fruit character out of the yeast. And the fermentation is like two days!

Collaborations like that are great. We do really well in Boston. A lot of people have gone to UMass between 1997 and now, and they remember us. We do well in Worcester too. But our business is not trying to dominate shelf space. I think of our business as experience-based: come in, have some food, bring some friends, and maybe buy some cans to go.

BH: What are you canning right now?

CH: We can all the varieties for in-house sales. The big sellers are IPAs — Jess, Juliet, Katie. We just started sending out our collaboration beer with Shelburne Falls Coffee Roasters, which is a toasted coconut cream porter. I do want to have more options out there besides IPAs. Any beer festival that I do now, half the people who come up are asking me if we have beers other than IPAs. Even in 2015 and 2016, I wasn’t hearing that as much.

We still have some bottles of a sour porter with blackberry. As we grow internally, I’d like to find more outlets to make that kind of esoteric stuff.

BH: What else is on your wish list right now, as a brewer? What kind of beers would you like to find time to make?

CH: We try to offer an array, but I think what’s missing in this market is an appreciation for Belgian trippels and some rich, complex maltier beers. I’ve been toying around with the idea of a collaboration that uses our local microflora and wild yeast to impart flavors into the beer. Like a Lambic-inspired beer, if we had a coolship and a way of doing a proper mash for that.

The cider scene is super around here, and the Valley has a lot of wine drinkers. So, I think sours are a great way to bring new people into the fold. I’m seen more and more breweries around here doing sours, and doing them well. Everyone is so forthcoming with their research and experiences. Really, we’re just looking to bring more people into our culture, and share our ideas.

Beer is a weird industry. We have to supply a certain amount of beer and maintain a level of production, but we’re also artists. It’s multi-faceted, self-driven work. I would have never thought I’d be involved in this. There’s still so much to learn. But the staff and the customers here are great. And I think we’ve proven in the past few years that we can maintain our roots and continue to grow. This is a special place.