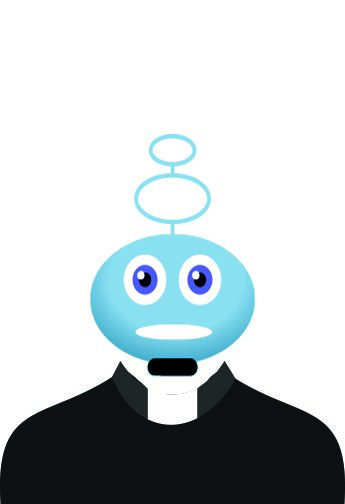 Religion, that opiate of the masses, has found a new way to spread dystopia — robot priests. A robot named Mindar is operating at a 400-year-old Buddhist temple in Kyoto, Japan, and is programmed to give sermons. Right now it only knows one sermon, which it repeats over and over, but its creators plan to give it machine learning capabilities to react to different parishioners and dispense advice. Mindar joins other religious robots including a German Protestant robot called BlessU-2, which gave preprogrammed blessings to over 10,000 people and SanTO — short for Sanctified Theomorphic Operator — a 17-inch-tall robot that looks like a Catholic saint and offers soothing words from the Gospels if you tell it you’re worried. A robot named “Pepper” can also perform your funeral.

Chaos ensued at a Whataburger in Bastrop, Texas, last week when a rodent scurried along a countertop as an employee attempted to capture it – that is until it plunged into the restaurant’s deep fryer. A customer recorded the incident on his phone and posted it on Facebook, garnering over 60,000 shares in a few days. “Bro, literally a rat – look at that s, c’mon!” the person recording the video can be heard saying. After the rodent took its fatal plunge, customers and employees shriek, curse, and yell in disgust and a man who appears to be a manager walks away with his hands over his head. Whataburger put out a statement in response: “In this instance, we closed the restaurant out of an abundance of caution and notified pest control. The entire restaurant has since been cleaned and sanitized.”

As Hurricane Dorian threatened Florida recently, a Florida man wanted to ensure the safety of his Smart car — the small, German-made cars that are about half the size of a normal car. So he parked it inside the kitchen of his home. His wife had said fitting the car inside the house would be impossible and he decided to take her up on that challenge. Plus, the garage already had her car parked in it and was full. “I said there was no way he could,” the man’s wife told the Huffington Post. “So he opened the double doors and had it in.” Despite the car’s small size, it took up most of the kitchen and she said it posed a challenge when moving around to cook and serve dinner. The couple’s dogs were a bit puzzled, she said.

Blame it on the kid

A woman from Utah won’t be getting any “World’s Best Mom” T-shirts or commemorative mugs anytime soon after she allegedly pretended to be her daughter to avoid being arrested. Police in Davis County pulled over the 38-year-old mother recently after they noticed her vehicle didn’t have a license plate. An officer searched the car and found drug paraphernalia and a white powdery substance, according to local news station KUTV. That substance tested positive for meth. The woman then identified herself with her daughter’s name and told the officer she was 21-years-old. But when the officer checked her information, he found that the woman and the photo of who she claimed to be weren’t exactly a match. Investigators then found that the 38-year-old mom had outstanding warrants and was taken into custody. The woman remains behind bars on a more than $9,000 bond for false personal information with intent to be another person, possession of a controlled substance, driving on a suspended license, and operating a vehicle without insurance.

So the Pope walks into an elevator …

Pope Francis, the highest member of the Roman Catholic Church, was late to his weekly Sunday sermon after being stuck in an elevator for 25 minutes. He told a crowd gathered in St. Peter’s Square just that, adding that the problem was caused by a power outage. “Thank God the fire brigade came,” he said to the crowd that Sunday, which was followed by a round of applause for the rescuers. He was only seven minutes late to the sermon, but the 82-year-old pontiff is known for his punctuality. It was so out of character that there was speculation over his health on live Italian television where the speech was being aired.

Having twins — at 73 years old

You read that headline right. A woman from India gave birth to twin girls recently at the age of 73. She is now the oldest person to ever give birth. The woman successfully delivered twins via C-section this past Thursday after she and her 80-year-old husband, who have been together since 1962, tried for countless years to have children. The couple were approved for in vitro fertilization when initial tests showed that it was possible for the woman to give birth. The mother will be kept under observation for the next 21 days due to her advanced age, but there were no complications during the birth.

Some 250 escaped pigs were causing headaches for a small Vermont town — until a long trail of hot dog buns was employed to help lead the critters home or into the waiting arms of people who corralled them. In Orange, Vermont, several farm workers and some volunteers who had heard about the pigs on the loose went up and down a hill recently to try and drive the animals back to Sugar Mountain Farm, after 50 pigs and 200 piglets escaped from the farm last month, following some damage to a fence that the farm owner believes was the result of vandalism by a former employee. The owner is facing tens of thousands of dollars in fines from the town, reportedly because the pigs were blocking roads and distracting people and drivers, as well as sometimes chasing people walking by on town roads.

It’s not just pigs that have been misbehaving. In a upscale section of San Jose, California, residents say they’ve been dealing with a nightly onslaught of cows and bulls that tear up lawns, leave massive amounts of poop everywhere, break sprinkler heads and refuse to be shooed off by tactics such as spraying them with sprinklers. The wild beasts began showing up a couple months ago, residents say, and have since come close to causing a number of traffic accidents. Some say the unruly ruminants seem pretty darn bold, not leaving until dawn. “They ran toward us,” one man told The Mercury Sun, describing an incident involving six of the bovines. “We turned on the sprinklers, but they just stood there and took a shower.” Where exactly the cows and bulls are coming from is not yet clear, the newspaper reported, although ranchers in the region, along with animal control officers, had begun trying to wrangle the animals away from the ‘burbs.

The most important meal of the robbery

A Florida man who is being accused of burglary allegedly made breakfast for himself in a victim’s home, then told that person to “go to sleep” when caught in the act. It was a fairly early meal, taking place around 4 a.m., according to a report. The alleged burglar fled the house when the homeowner called 911 and was later apprehended in a swamp. Alcohol may have been a factor, according to officials.