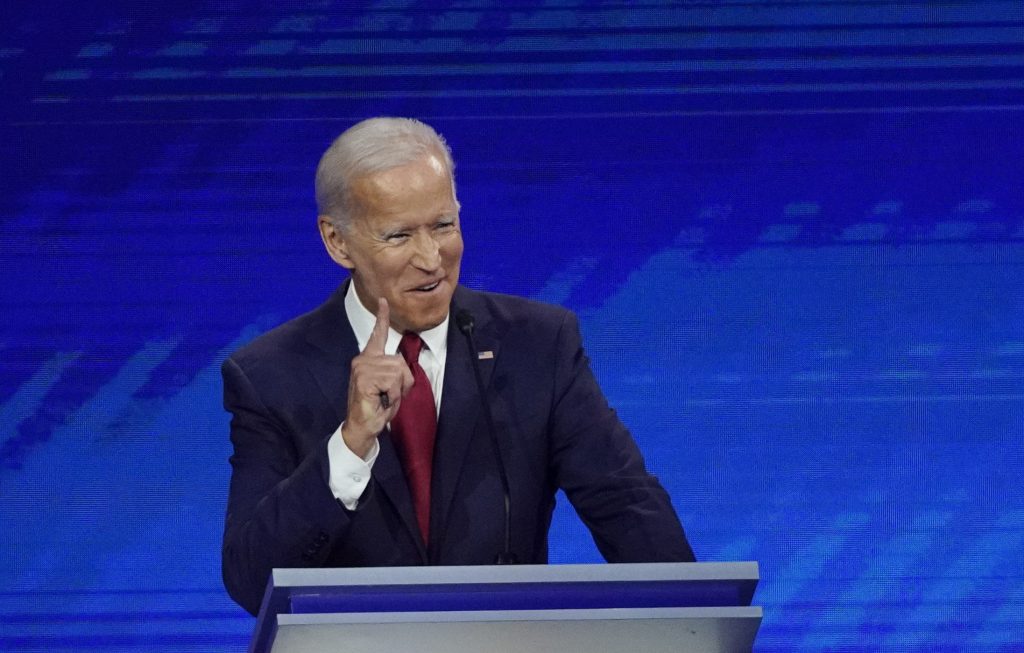 In this Sept. 12, 2019, photo, former Vice President Joe Biden responds to a question during a Democratic presidential primary debate hosted by ABC at Texas Southern University in Houston.Famous for his off-the-cuff storytelling, the former vice president regularly goes deep in the vault to pull out characters and events known only to a people of a certain age. (AP Photo/David J. Phillip)

I’ve never been an enthusiastic Joe Biden supporter. His history on criminal justice — supporting harsh sentences for drug crimes and the War on Drugs — his mishandling of the Clarence Thomas hearings, his vote for the Iraq War, and his lack of support for Medicare for All inspire little confidence among progressive voters. His handsiness and excess touching was also concerning, especially as reported in Nevada state assemblywoman Lucy Flores’s statement shortly before Biden announced his candidacy earlier this year — she said that a surprise kiss on the back of her head from Biden in 2014 made her feel “uneasy, gross, and confused.”

At the same time, it was hard to counter the argument that he is the “safe choice” in taking on President Donald Trump. The thinking goes: Biden will win over moderates and Republicans turned off by Trump and lead the Democrats in a landslide presidential victory.

But Biden’s “electability” rationale has been eroding and is now overshadowed by the growing reality that he is not fit for the rigors of a campaign against Trump, nor is he an appropriate standard bearer for the modern Democratic Party.

This reality was on full display on Biden’s campaign stop late last month near the Valley, in Keene, New Hampshire. He mixed up which state he was in, telling reporters, “what’s not to like about Vermont?” To confuse New Hampshire, which holds the nation’s first primary, with Vermont, which is all but won by home state favorite Bernie Sanders, is a baffling error — why would his campaign team have scheduled him for a speaking event in Vermont?

Taken on its own, the mistake might seem harmless. But it capped a string of misstatements: getting the locations of recent mass shootings wrong, falsely claiming he was Vice President during the Parkland Shooting, and finishing the July debate by telling people they should “go to Joe 30330” to support him. These have been generously called “gaffes” by the mainstream media, rather than what it appears they really are — evidence of a lack of mental sharpness.

And it’s gotten much worse since then. Despite his recent claim of believing in “truth over facts,” he has been showing an alarming disregard for both in recent weeks.

The Washington Post on August 29 exposed that a war story Biden has repeatedly told on the campaign trail was fabricated — a jumble of different experiences he meshed into one to make a more compelling though untrue story. When confronted with the documented falsity of the story in an interview with NPR a few days later, he doubled down instead of apologizing, stating: “The details are irrelevant in terms of decision-making.”

In the same interview, Biden also made false claims about his opposition to the Iraq War, saying, “Immediately, that moment it started, I came out against the war at that moment.” Following his 2002 vote in favor of the war, which began in 2003, he only claimed the vote was a mistake in 2005. A year into the war in 2004, he was still making speeches in support of victory there, according to CNN.

These examples of misrepresentation of the facts and later claims that the details don’t matter are exactly what we need to be getting away from following Trump’s nightmare “post-truth” presidency.

Worst of all, however, was Biden’s infamous “record player” answer in that same September debate. Moderator Lindsay Davis confronted Biden with a comment he made decades ago regarding racial inequality in which he said, “I’ll be damned if I feel responsible to pay for what happened 300 years ago,” then asked what responsibility Americans need to take to repair the legacy of slavery in the country. What followed was a rambling response that combined a dated musical reference, a line about Venezuela, and a racial offense in which he seemed to imply that black people were less capable of being good parents, and needed social workers to come into their homes and teach them:

“We bring social workers into homes and parents to help them deal with how to raise their children,” he said. “It’s not that they don’t want to help. They don’t — they don’t know quite what to do. Play the radio, make sure the television — excuse me, make sure you have the record player on at night, the — the — make sure that kids hear words. A kid coming from a very poor school — a very poor background will hear four million words fewer spoken by the time they get there.”

With comments like this, how long will it take for people to question their support of this candidate?

If the decision comes down to an election between Biden and Trump, you’d better believe I’m going to check the box for Biden. But with other, more progressive, more exciting, and frankly more electable candidates in the race, I’m hoping it’s a choice we don’t have to make.