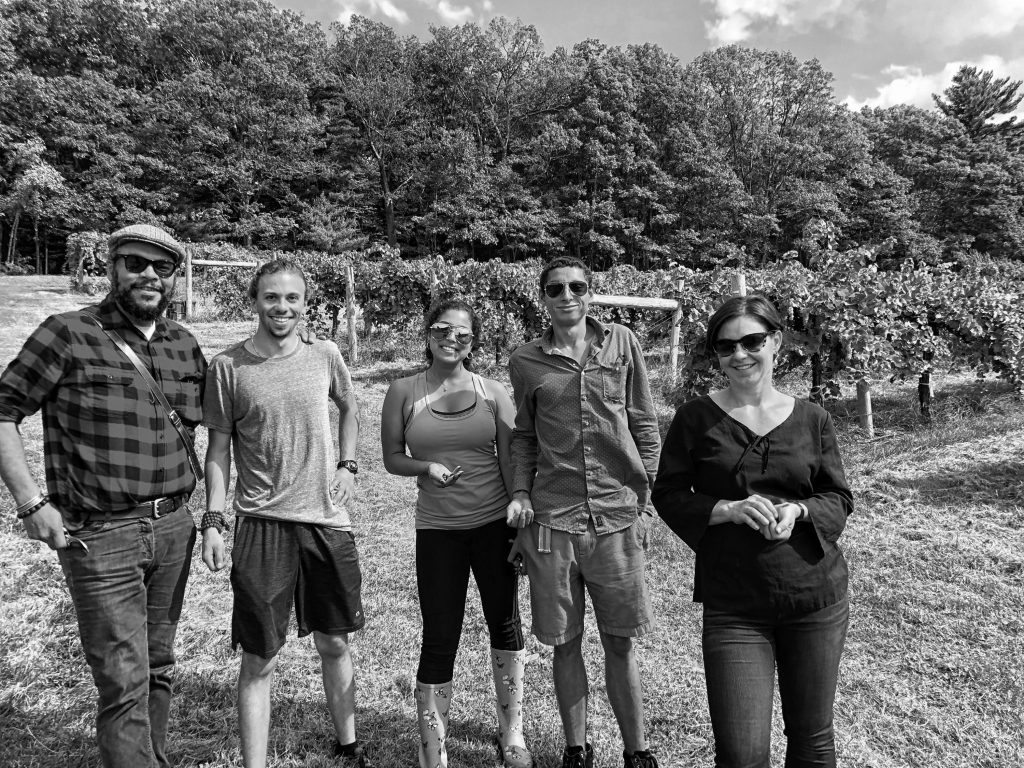 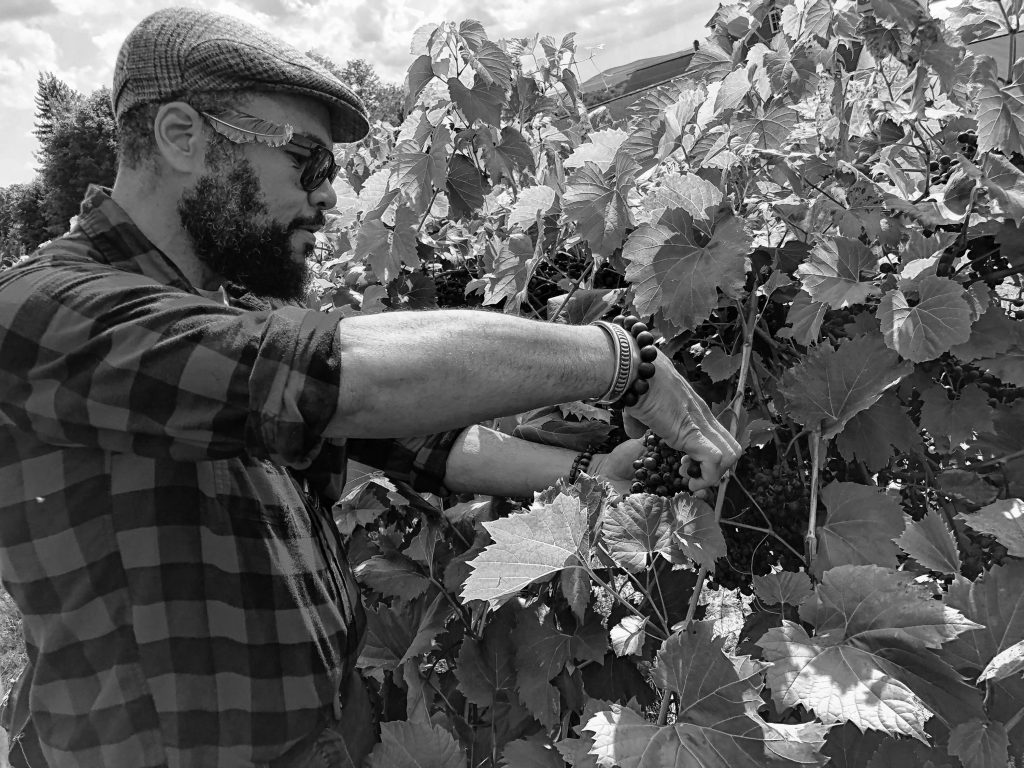 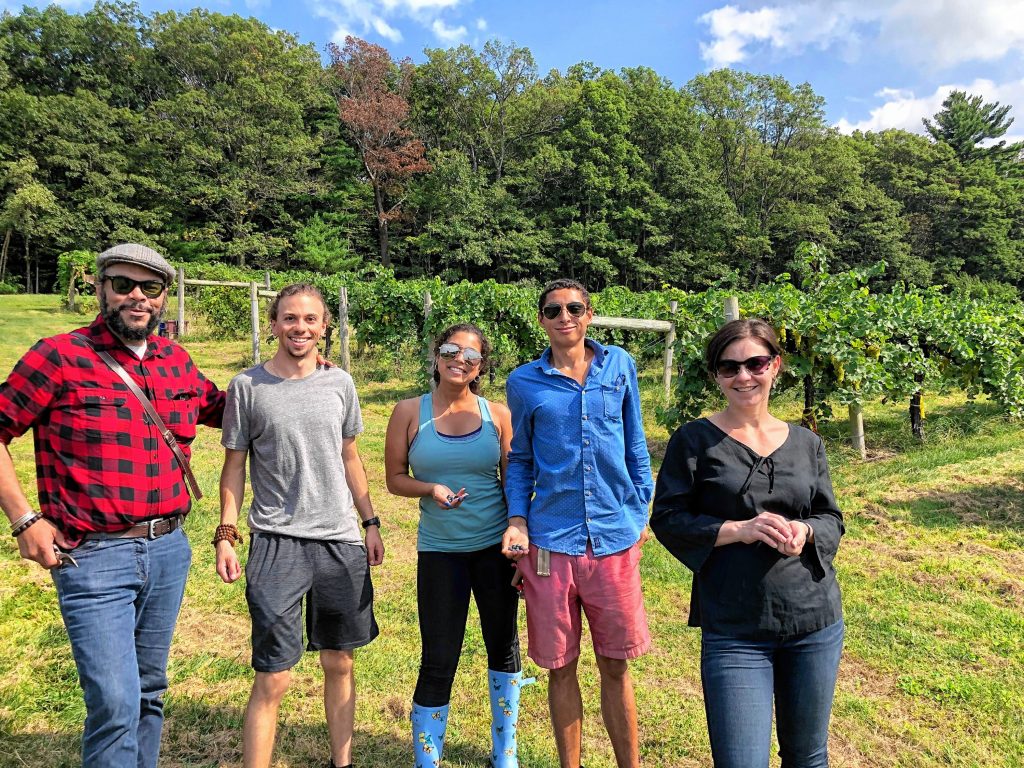 I have never been to wine country. At least never to any of the famous wine countries. Not Napa. Not Bordeaux. Not Piedmont. Nowhere. This is yet another one of the many reasons why it could be considered a lapse in judgment every time the Advocate prints one of my wine columns. However, my wine curiosity and enthusiasm knows no limits! Perhaps a few limits — like no more than one bottle a night — might be advisable.

Curiosity got the best of me when I learned that UMass Amherst’s Stockbridge School has a vine expert. She’s penned or co-authored some of the most beloved works on vines. Like, Root diseases of grapevines in California and their control, Cylindrocarpon species associated with black-foot of grapevine in the Northeastern United States and Southeastern Canada, and — my personal favorite — Extensive divergence between mating type chromosomes of the anther-smut fungus. I do love smut. The author is Elsa Petit.

Elsa Petit is from Bordeaux, France. Real wine country. She earned a Masters Degree in agronomy there. She then went on to get her Ph.D. in plant pathology from U.C. Davis, which is like the Harvard of wine studies in the U.S. I asked Dr. Petit if I could audit one of her classes. She invited me out to Cold Springs Orchard, the UMass fruit research facility and farm store overlooking the Holyoke Range in Belchertown. I invited chef and sommelier Michaelangelo Westcott so I wouldn’t be the only old man in a class full of undergrads.

Your average fruit consumer at Cold Springs Orchard might not even notice that there is a classroom and laboratory attached to the farm store, but Michaelangelo and I sidled up close to an undergrad in the class so we could cheat off of his paper. On this particular day, Dr. Petit’s class was an overview of ampelography. Ampelography is the virtually lost art of studying and identifying grapevines based on the shape, color, and contour of their leaves and grape clusters. Thanks to advancements in DNA fingerprinting, ampelographers are not in as high a demand as they once were. “My grandpa claimed he could recognize a grape by its bark,” Petit said, “I’m not sure. Maybe he was just trying to show off.” I wish you could hear the magical way Elsa, with her French accent, pronounces words like “ampelograFEE!” and “grape vah-rye-ee-TAY.” So worth the antiquated vine identification lesson. And she pronounces her last name, not like the Hall of Fame Yankee pitcher, but like the size. (You can hear her, by the way. There is a podcast at wrsi.com. Shameless plug). Petit then assigned us all a written report on leaf shape due in 10 days. Great, homework already.

We left the classroom and headed out to nature’s classroom: the bathroom. And then we went out into the vineyard. In the vineyard there are speakers pumping out the sounds of birds of prey to keep the smaller birds from preying on the grapes. “We know that white grapes are not something that birds go for, especially. But we know they really love the red grapes.” Petit challenged the class to ampelography the grapes. “One of these is Riesling. The rest are hybrids. We can compare how the grape varieties are doing in different climate.” One group of vines looked particularly sad. Those were the Riesling. “These were put here to show that it’s not very good to have a Riesling or European grapes. It was supposed to fail. It failed.” 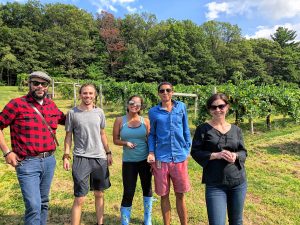 Sadly, in most places in our region, European vines can’t handle New England’s deep cold. The grapes that are doing well are grapes like Corot Noir, Vidal Blanc, and Frontenac — French/American hybrid grapes that you’ve never heard of that were Frankensteined by botanists at Cornell, the University of Minnesota, and other universities. We picked some grapes and popped them into our mouths. “The Vidal tastes like Champagne,” Chef Wescott says. He’s right. It’s like eating Champagne.

We took a look at how downy mildew was forming on some leaves. These diseases are her specialty. She loves smut. “Here you can see on the back, it’s downy. Vidal has a lot of downy mildew.” I ate them anyway. “Downy mildew and powder mildew are two of the most important diseases around the world. And they come from here.” Figures. Americans try to colonize everything. Mildew might make a winemaker decide to use sulfur to keep the mildew down. For some reason, to some people, sulfur is controversial in wines. But it is a naturally occurring element found in vineyards, even when people don’t add extra sulfur to fight mildew. Dr. Petit says, “The Bordeaux mix is for powder mildew and the sulfur is for downy mildew.” I’ll bite. What’s the Bordeaux mix? “Copper, sulfates, and lime.” Also natural-ish. Hey, it beats Round-up in your wine.

Petit is not a winemaker. “When you grow up in Bordeaux, you are very much into viticulture,” she says. “I actually work more on the growing the grapes part, which is essential to making a good wine. The classes I’m teaching are on how to grow good grapes, and the practices that improve the grape quality to make wine. How to remove some shoots or some fruits so you have more energy going into fewer fruits, concentrating flavor and sugar.” The class went back to the lab to measure how much sugar was in the grapes. The sugar is measured in degrees, called Brix. The sugar content in these grapes was a little low, so not prime time to harvest on the day we were at Cold Spring. Even if the grapes were at the perfect point, no one is currently making wine at UMass. But all the technology and infrastructure and grapes are there if they ever choose to do so. Perhaps UMass doesn’t need more alcohol, anyway.

What brought Dr. Elsa Petit to UMass from one of the greatest wine regions in the world? “I went to California for one of my internships and stayed for my Ph.D. I thought I would go back to France, but I met my husband there.” L’amour. But does our vine expert from France, now residing in the Valley, have a preference when it comes to wine? “I’m not just French wine. I like variety. There is a wine for each weather and also my mood.” And Dr. Petit’s thoughts on our burgeoning local wine movement are quite favorable. “We haven’t been taking as much advantage of these grapes as we should. People don’t know as much about these hybrid grapes. Even though they don’t have a name as recognizable as Cabernet or Riesling, we are better off economically to grow grapes that are well adapted. Native grapes that have a resistance, that are natural, so we won’t have to spray as much. It’s more sustainable. In New England we are having to deal with extreme variation in temperature. And we have a lot of disease. So, in a way, we are better prepared in diversity of grapes and resistance to diseases than if we were to just stay with one variety like they do in Europe.”

Admittedly, as much as I espouse the values of supporting local in most things, it’s taken me some time to warm up to the local wine movement. But if the Bordeaux-born vine expert and author of Evolutionary advantages and drawbacks of uni- versus bifactoriality in mating type determinism can enjoy our local wines, shouldn’t I?

“It’s nice to have new flavors and new styles. It’s something positive.” On a slightly less positive note, Chef Wescott and I now have a 10-page paper on ampelography due on Dr. Petit’s desk. But we do thank her for letting us interlope on her class.