Bizarro Briefs: Um, there’s some toilet paper on your … nevermind 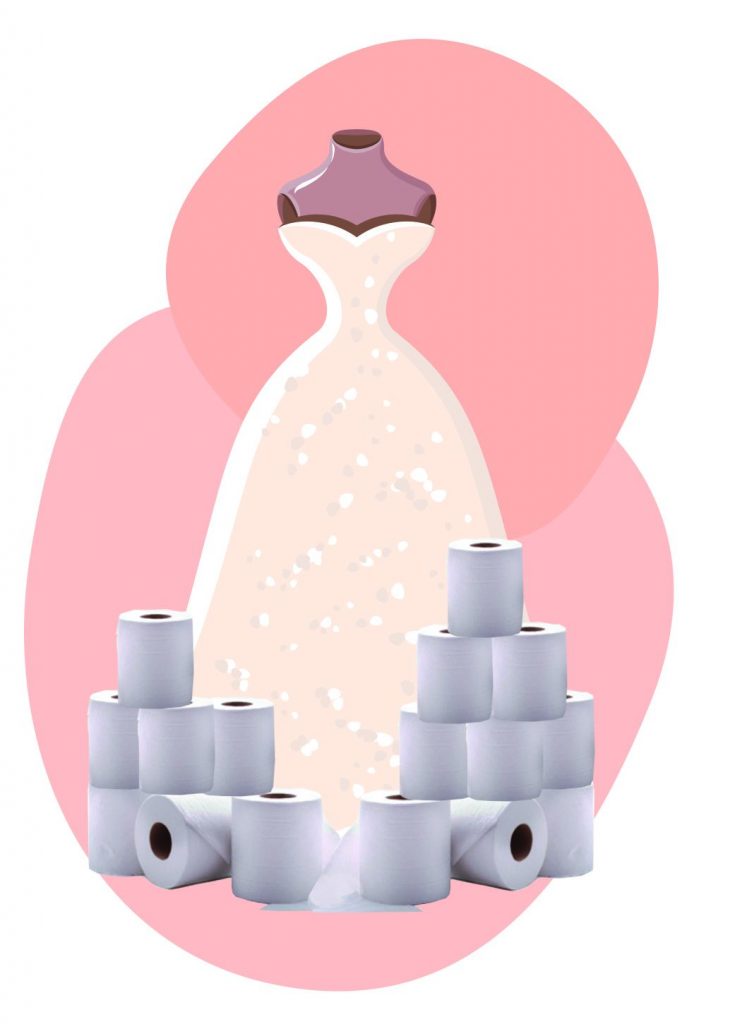 Um, there’s some toilet paper on your … nevermind

The long-awaited results are in: Mimoza Haska from Surfside Beach, S.C., is the winner of this year’s Toilet Paper Wedding Dress competition. In this annual contest, competitors design and build elaborate wedding dresses entirely out of Quilted Northern brand toilet paper, tape, glue, and needle and thread, and are judged by fashion gurus and a marketing executive with Quilted Northern. More than 1,500 people entered the competition, which is run jointly by the toilet paper company and Charm Weddings. As far as the designs go, entrants used between 12 and 123 rolls of toilet paper to create their dresses. Haska wins $10,000 for her winning entry, which featured complex lace patterns and designs. Not a bad return on investment for about $30 worth of toilet paper.

What do you do when your country is facing a massive pork shortage? If you’re Chinese farmer Pang Cong, the answer is simple: breed bigger pigs. But not just a little bigger. The farm is breeding a herd of pigs that are growing to be the approximate weight of polar bears — about 1,100 pounds. That’s about four times the average weight of a pig that goes to slaughter in China. The hope is that the giant swine can help fill the market as the pig population has been decimated by African swine fever.

And meanwhile, over in Scotland

Scottish shepherds are dealing with their own animal problem: farting sheep. But a team of Scottish scientists are on the case. The “Grass to Gas” initiative was recently awarded a grant of 250,000 pounds to research how to breed sheep that fart less, and thereby release less methane into the atmosphere. It’s currently unknown how much the “woolley windbags” produce in methane, but one of Scotland’s top sheep geneticists says that if they are successful they will be able to breed, feed, and manage sheep with less detriment to the environment. Sounds like something to toot about.

Not what they expected

Ever seen the 2009 thriller “Orphan”? Well, this one is a bit like that. A woman and her ex-husband, formerly of Indiana, are accused of felony neglect for abandoning their adopted daughter in an apartment in Lafayette in 2013 before moving to Canada one month later and breaking off contact. Criminal charges were leveled at the former couple in September, but the adopted parents contend that the girl was not a 9-year-old when they left her as charging documents claim, but was actually 22 and that the girl has a rare form of dwarfism. The woman claims that the girl would terrorize the family, telling DailyMailTV that “She would draw pictures saying she wanted to kill family members, roll them up in a blanket and put them in the backyard.” The former couple had collected the child from Florida in May 2010, but in 2012, a judge in Marion County Superior Court agreed to correct the “child’s” date of birth to change her age from 8 to 22. What isn’t clear is why detectives have waited until now to bring allegations against the former couple, nearly five years after police discovered the “child” living on her own — the “child’s” whereabouts are also currently unknown by anyone involved in the case.

The latest in ice cream flavors

In parts of South America, including Colombia, Peru, and Bolivia, guinea pigs can be something other than a child’s cuddly little pet — like a hot dinner dish served up with salt, potatoes, and peanut sauce. But in Ecuador, one vendor is taking the furry critters to the next gastronomic level, serving guinea pigs as a cold dessert: ice cream. Indeed, some people like ice cream made from “cuy,” as the animal is locally known. Along a highway linking the cities of Quito, Ecuador’s capital, and Sangolqui, Maria del Pilapana runs a tiny stall whose offbeat flavors are attracting a growing crowd, according to the Associated Press. She concentrates guinea pig flavor after cooking and preparing a pâté from the flesh of the animals, adding milk and cream and refrigerating the mix until it has the rough consistency of ice cream. “I was suspicious, but it was real tasty,” said one customer. You can also try Pilapana’s other strange flavors: She makes ice cream flavored with beetles and mushrooms.

A better way to deal with small animals

In Scotland, another small creature, rather than being turned into ice cream, was given some tender loving care by a pilot who stopped his small jet as he readied for takeoff to let a baby hedgehog cross the tarmac. The 30 passengers on the Saab 340 jet, which was about to fly from Lewis and Harris island in the Hebrides, off the northwest coast of Scotland, to the mainland, were told the reason for the delay and did not appear to object, the UK Metro News reported. Neil Hudges, director of operations for the airline in question, said “The captain safely avoided a prickly situation for the little hedgehog, following procedure until the animal was off the tarmac.”

Legendary rock band KISS has been playing music for almost half a century. The band has played for audiences all over the world … but coming up will be their first performance under the sea. The band will perform for great white sharks as well as eight fans in a small submarine. The concert is part of an Airbnb promotion slated to take place on November 18 in separate boats off the coast of southern Australia. The first-come, first-served tickets are $52, which are half the price of KISS tickets in some of the worst seats at Madison Square Garden. According to Airbnb, proceeds for the event will go towards charity. Reservations can be made for the four-song set starting at 6 p.m. EDT on airbnb.com/KISS on Oct. 14.

Printing a car with dad

A physicist from Colorado used a 3D printer recently to build a Lamborghini Italian sports car with his 11-year-old son. The Erie, Colorado, resident started working on their full-size model of a Lamborghini Aventador after his son asked if it was possible to 3D print the car. The vehicle isn’t an authentic Lamborghini, however, because it contains a Corvette V8 engine, and various junkyard-found auto parts, including Porsche components. But it looks like the real thing, which is probably the more important thing, because 3D printing any kind of vehicle is pretty cool.

The case of the overused sperm

A man is suing a fertility clinic in Oregon after sperm he donated was used to father at least 17 children, a breach in the contract, which said there would be a five-child maximum. The lawsuit was filed in Multnomah County Circuit Court and reveals that the man donated his sperm when he was a first-year medical student at Oregon Health & Science University in 1989. Recently, two of his biological children as a result of the sperm donations contacted him. His offspring used Ancestry.com to identify at least 17 kids as a result of the donation. At least two of the children as a result of the donation also attended the same school as his children he and his wife raised. The man is seeking $5.25 million in damages.