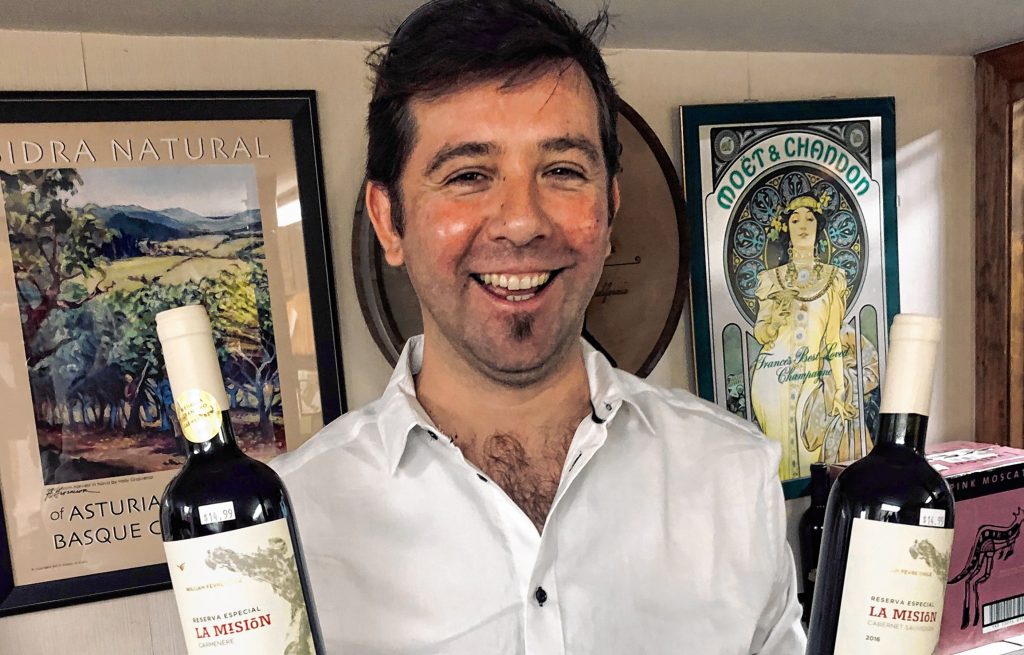 Cristián Aliaga thought he wanted to be a dentist. Maybe it was the future prospect of uncovering leftover tuna fish under someone’s dental bridge that made him reconsider. But when it came time to make a decision as to what to study at university in Chile, he gravitated away from root canals and instead pursued roots. Aliaga is the winemaker for William Fèvre Chile. I met with him in the basement wine bunker at State Street Wines and Spirits, where we tasted some of his La Misión label wines. It’s always interesting for me to talk with winemakers, instead of the high-functioning alcoholics I usually talk to about wine. “Yeah, but I still drink wine, so no problem,” Aliaga adds. “The best part about being a winemaker is I don’t have to spend a lot of money on wine.” 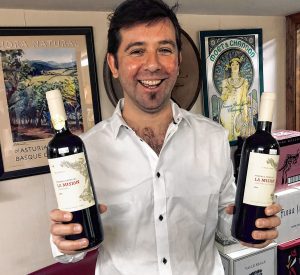 Another treasured aspect of being a winemaker in Aliaga’s estimation is the opportunity to travel. And travel he has. According to the William Fèvre website:

Cristián studied Oenology at Universidad de Chile. He made his first harvests at Errázuriz in Aconcagua Valley. Then he worked for 12 years at Veramonte, in Casablanca Valley, becoming Chief Winemaker. During that period he made harvests in other wineries such as Kendall-Jackson, Paul Hobbs, Saintsbury, and Quintessa in California; Villa María in New Zealand; and Chateau Dillon in Bordeaux, France. Then he returned to Chile to work in William Fèvre, looking for new challenges in the new Chilean terroirs.

The terroirs he works in Chile are breathtaking. Well, I’ve never been there. But the pictures are breathtaking. And I’m pretty sure it’s not just in an Instagram hot kind of way. They are growing grapes in the terraced foothills of the glorious snow capped Andes mountains. And, like in so many wine growing regions, elevation is key. “The Cab is grown at 9,500 feet. The Chardonnay at an even higher elevation. 9,800 feet.” It’s remarkable for me to watch people who I know think in metric who can translate to our silly system of measurement.

“These vines were planted in 1992 by Monsieur Fèvre. We got three clones from Chablis. He brought some Chardonnay, Pinot Noir, and a little bit of Sauvignon Blanc.”

William Fèvre, whose name graces the labels on the bottles of Aliaga’s wine, is a famous name from France. He has the most Grand Cru vineyards in Chablis. But frustrated with the strict rules he was facing in expanding his Chardonnay plantings there, he looked south to Chile. Enamored with the quality of fruit he found there, he teamed up with a local producer and his Chilean label was born.

Fèvre may be a relative newcomer to South America but wine grapes are not. “We’ve been making wine in Chile for over 300 years,” Aliaga explained. “In the 1980s when the economy changed, the winemaking changed.” We didn’t discuss it, but I can only assume the economy changed because of something to do with Pinochet. Despite the sound of the name, Pinochet is not a wine. He would be the worst Pinot there is. “Families used to make bulk wine for themselves,” Aliaga says, “Now we make 80 percent of our wines for export.” And one of the major reasons the world is interested in Chilean wine is the mysterious case of the Carménère grape.

“In the 1850s people brought a lot of vines from France to Chile,” Aliaga said. “But at that time, we didn’t really know what they brought.” There was one grape in particular that peaked people’s interest. The grape leaves looked a bit like Merlot. The wine tasted a lot like Merlot. “People studied what we’ve got, we knew it was different,” Aliaga said. “We called it Chilean Merlot but they said, ‘no,’ you’ve got the lost Bordeaux grape.” Carménère. What happened to this lost grape?

In the 1860s, France was hit with a phylloxera plague. Phylloxera are microscopic, sap-sucking lice that feed on the leaves and roots of grapevines. As with so many international pests, like the powdery and downy mildew I wrote about in the last column and our President, phylloxera are native to the eastern part of this continent. The phylloxera was brought across the pond by a Victorian English botanist. But the European grape vines didn’t have the resistance to handle them. The phylloxera wiped out somewhere between 2/3 and 90 percent of all of Europe’s viticulture. Sorry, Europe. But, also in classic American style, America swooped in with their phylloxera resistant rootstock! It was grafted into the European roots, and rescued the wines of France like an agricultural invasion of Normandy. You’re welcome again, France. In Bordeaux, they were able to replant Cabernet Sauvignon, Merlot, Cabernet Franc, and other grapes but the Carménère was hit particularly hard by the phylloxera and was presumed to be extinct. No matter. Carménère never really ripened well in Bordeaux anyway. France was fine letting that grape go the way of the dodo.

Where in the world was Carménère? Santiago. Well, Chile at least. It was not extinct at all. It was one of the unidentified plants brought to Chile in the mid 19th century. Immigration saved it from total annihilation. One can tell why Carménère was confused with Merlot for so long. It’s got that soft velvety mouthfeel with a touch of cocoa. But a much more intense fragrance: cigar box, black pepper, incense. The 2017 La Misión that I tasted won a gold medal in a Chilean winemaking competition. The number one Carménère in the place where people are really doing Carménère. And it’s only $14.99.

The Chardonnay was also $14.99 and was delicious, as well. My palate usually leans away from “New World” Chardonnay, and the creamy, vanilla flavors that occur due to malolactic fermentation and barrel aging methods. While this Chardonnay nodded toward that style, Aliaga doesn’t employ any of those techniques. “All the creaminess, the ripe flavor came from the sun and the soil. The sun gives the grapes a thicker skin, which gives it those creamy notes. It’s not like vanilla; it’s more like honey.”

At 45 years old, Aliaga has now been making wine for nearly half of his life. I asked him if he’s glad he chose being a winemaker over being a dentist. “Absolutely. But I have to go to the dentist really soon. It’s been a while.” My hygienist often comments on how much wine I must be drinking given how hard she has to scrape.