Bizarro Briefs: A joke from beyond the grave … or in it 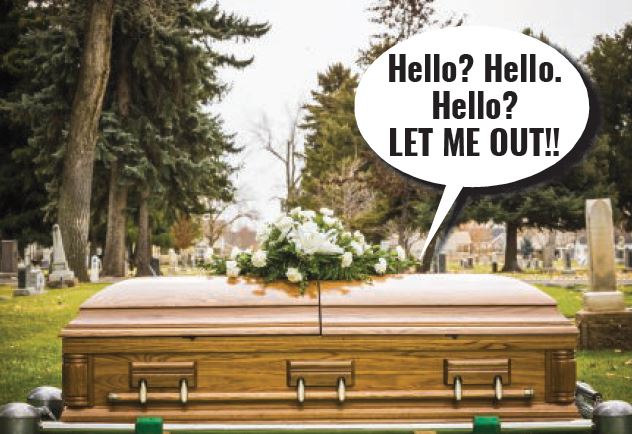 A joke from beyond the grave … or in it 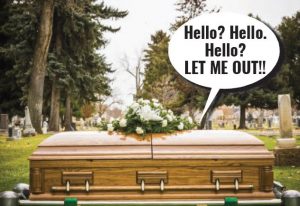 An Irish man raised the spirits of those attending his funeral by requesting a recording be played of him pretending to be alive in his coffin as it was lowered into the ground. “Hello? Hello. Hello? Let me out!” the recording played before it turned to knocking. “Where the fuck am I? Let me out, it’s fucking dark in here.” He told his daughter to record him yelling and singing and his dying wish was to have it play at his funeral. The daughter did as she was asked, though she did tell some other family members about it first to warn them. A video capturing the ceremony has been replayed more than 2 million times.

Time to Clean out the Basement

Flooding was a huge problem in the Midwest earlier this year, and climatologists say the risk of flooding will likely grow with climate change. That’s bad enough — but not as bad as what one homeowner in Iowa recently experienced. He lives in Bagley, about 45 miles northwest of Des Moines, and discovered about five inches of animal blood and fat in his basement. He told the Des Moines Register he hasn’t been able to clean up the grisly mess (including animal tissue — yuck!) because more of it is still seeping in. State environmental officials say a clog or a break in a pipe from a neighboring meat locker, where the residue of slaughtered animals is washed down a drain, is apparently the source of the problem. While repairs are being made to the pipe, the family has temporarily moved in with a relative, the Register reported.

Homeowners in Lake Tahoe, California, recently came back to their digs to discover they had some unexpected visitors: three bears, a mother and two cubs, were cavorting inside. The homeowners called for help from members of the BEAR League, a local organization that works to keep bears safe among humans, and the animal activists were able to get mom and one of the cubs to leave pretty quickly. But the other cub wasn’t quite ready to go back to nature and quickly scooted across the living room, then climbed down a staircase railing as the activists were shouting at it; the whole affair was caught on video by a homeowner. BEAR members said the incident showcased the need for homeowners to electrify vulnerable points of entry to their residences. “It’s no fun having bears in houses,” they said. “They do not tidy up after themselves.”

Last week, the Paris Zoological Park began showcasing a new organism that scientists are having difficulty classifying. Simply called “the blob,” this yellowish unicellular living being looks like a fungus but acts like an animal. It has no mouth, no stomach, and no eyes, and yet it can detect food and digest it. It has almost 720 sexes and it can heal itself in two minutes if cut in half. The blob is named after the 1950s flick of the same name about an alien life form that consumes everything in its path in a small Pennsylvania town. The director of the museum told Reuters, “It surprises us because it has no brain but is able to learn … and if you merge two blobs, the one that has learned will transmit its knowledge to the other.”

A Connecticut woman took to Facebook last week to boast about assaulting a former lover and either cutting or biting off the victim’s middle finger. Police say the woman is charged with first-degree assault and disorderly conduct and is being held on a $75,000 bail. The assault happened while the victim was walking to a restaurant near his home when he saw the woman approaching him with a brick in her hand. The two got in a scuffle and even though the victim managed to get the brick out of her hand, he noticed the tip of his middle finger gone after she fled. Police said they are not sure whether his finger was bitten or cut off as the assailant did not have a knife or other sharp object on her when police caught up to her. The woman’s mother even found the finger and police brought it to the hospital where the victim was receiving treatment but it could not be reattached.

Pope Francis, the head of the Roman Catholic Church, made a goof on Twitter this past week when he accidentally gave his support for National Football League team the New Orleans Saints after mistakenly tagging the sports team on social media. The pope’s official Twitter account posted an excerpt from the canonization of five new saints with a tweet that included “#Saints,” which automatically added a New Orleans Saints emoji. The team, which was about to play against the Jacksonville Jaguars and later defeated the opposing team by 13-6, thanked the Vatican for supporting the team, tweeting, “Couldn’t lose after this. #Blessed and highly favored.”

Twins with twins birthed by twins

In what appeared to be an emergency, a team of meteorologists in the National Weather Service’s Duluth office believed they saw the beginning of a large inferno consuming an area of Rice Lake National Wildlife Refuge. The strange thing was that no emergencies had been reported. Stranger still, the fire seemed to be centered around a lake. Closer inspection revealed what had initially appeared to be a blaze was actually 600,000 ducks who all took off at the same time, spooked by a wildlife refuge workers conducting a waterfowl survey by boat.