Letters to the Editor: The state isn’t listening on the Route 9 bridge 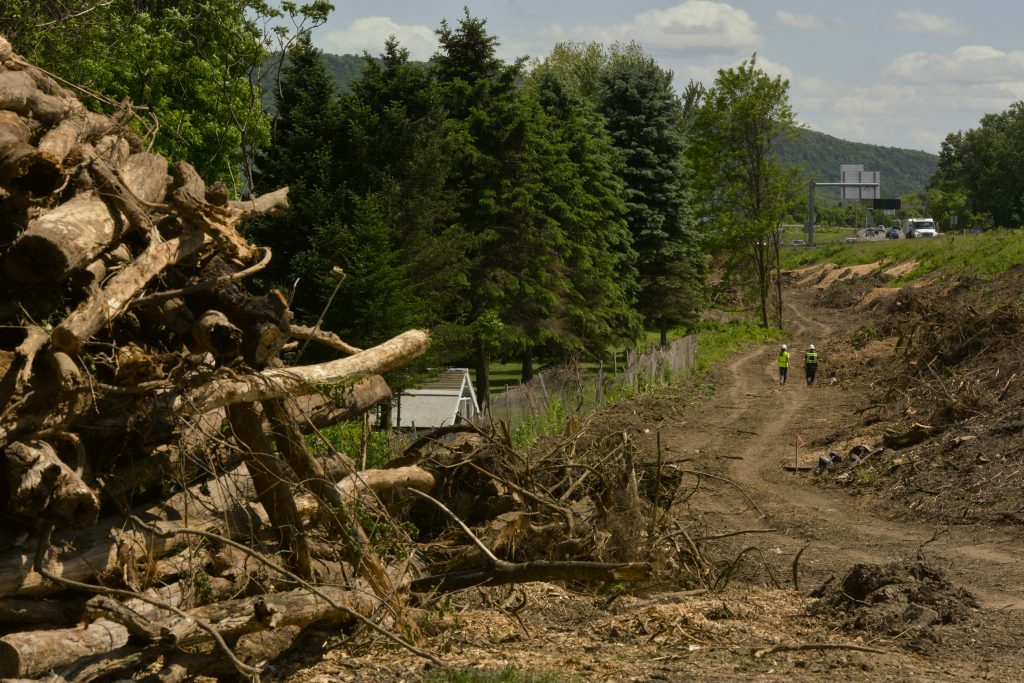 Piles of debris from felled trees lie beside the Interstate 91 Exit 19 off ramp, Monday, June 3, 2019 where work has begun on a roundabout that will replace traffic lights at the intersection of the off ramp, Bridge Street, Damon Road and the Coolidge Bridge. Jerrey Roberts photo

The state isn’t listening on the Route 9 bridge

Are you aware the state is starting work on a two lane roundabout to replace the traffic lights at the bridge? While none of us like sitting at traffic lights, they do serve a purpose. Years ago there were public meetings on what to do about the problem of traffic at the bridge. The obvious answer was another bridge. You know the state will never do what is obviously the right thing. One of the other suggestions was an overhead cloverleaf because it would take a lot of the traffic out of the intersection. I have been told to shut up and go away — we, the public, had our chance and the decision has been made.

If you have followed the Gazette over the last few months you will remember an article saying the job had been scaled back. What was scaled back and why? The article said this would be a nightmare as usual but the state could make it better by keeping the public informed of what was going to happen and when. Remembering the other bridges are a long ways away, what choices do most of us have but to put up with whatever mess they create?

This was talked about for a short while on the Facebook page “you know you lived in Northampton when.” The moderator shut down the conversation when someone who appears to work for the MassDOT said we had our chance and the decision was made. He indicates the public had some say in this. I disagree. I don’t think the state listened to one word from the public. I have written numerous letters to everybody at the Gazette and they refuse to print any of them. I would go out on a limb and suggest they have been told to leave this subject alone. They will not respond to any of my emails.

Some of the responses on Facebook were in agreement with me — a roundabout is not the correct solution here. It might even be a huge mistake. The state had a website devoted to this job but they took it down. I badgered a guy in Boston and got the drawings. I spoke with an Amherst ambulance crew who had no idea what was planned and they agreed this roundabout to be a bad idea. Have you ever been in an ambulance that had to get over that bridge to the hospital? I have once and I can not help but think about how this new intersection may impede their ability to get through the intersection during the afternoon rush hours.

In one of my emails to the Gazette I asked them to dig up the minutes to those public meetings and see what was discussed to see if the state in any way followed the public’s suggestions. The Gazette never responded to me. The Gazette also published an article saying traffic had reached a tipping point in the state. They published it and then let it drop. The Gazette does not care. I thought they had a duty to the area to investigate these sorts of things especially when this project affects so many people in the Valley. Don’t we have a right to expect fair treatment from the state regarding our tax dollars? Or is it the fact we are Western Mass and not Boston so we do not rate a functioning infrastructure?

Writing to set the record straight on Rep. Neal and retirement benefits

The October 11, 2019, edition of the Valley Advocate contained a letter to the editor from Michael Gossman of Springfield titled, “Rep. Richie Neal is punishing government workers.” As advocates for more than 52,000 retired Massachusetts public employees, we are writing to set the record straight when it comes to Congressman Richie Neal’s efforts to correct the injustice that are the Social Security WEP and GPO laws.

Since 1983, countless attempts have been made to repeal both the WEP and GPO laws. Each has failed. In nearly 37 years, not a single repeal bill has ever made it to the floor of the House or U.S. Senate. We believe that full repeal, such as H.R.141 calls for, is not a viable option. And even if such a bill were to pass the House, it would not have the national support needed to pass the U.S. Senate. We believe there is a better realistic approach that does have the support needed to bring relief to the 73,000 Mass. residents now impacted by the WEP law.

In recent years, Mass Retirees has helped lead a national effort to develop a viable proposal to reform WEP. Our work has culminated in the filing of H.R. 4540, filed in September by Congressman Neal. The bill has won the support of most national public employee unions, as well as private sector advocacy groups such as Social Security Works. It would bring immediate help to current retirees who have been harmed by WEP in the form of an $1,800 a year increase in Social Security benefits. Future public retirees will be subject to a new fair Social Security formula, which accurately calculates benefits based on work covered by Social Security.

Without the support and dedication of Richie Neal, our members would stand no chance of seeing any relief from the WEP. Drawing ideological lines in the sand and taking an all or nothing approach, will only result in continued financial hardship for public retirees. The fact is that full repeal of WEP or GPO does not have the national support needed to pass. Let’s work to pass what’s achievable, then build upon that success with future improvements.

Meanwhile, we want to thank Congressman Neal for his support of our public retirees and for making the passage of WEP reform a top personal priority.

In support of Hunter Biden

I suspect Hunter Biden, the Hollywood handsome son of former VP Joe Biden, will continue to be the subject of attack throughout his father’s candidacy for president for past substance abuse and accusations of “using the Biden name” to gain leverage in whatever he does. What these accusers fail to note is he is a graduate of Georgetown and Yale Law, a partner at Rosemont Seneca Partners, LLC, an international consulting firm, chair of World Food Program USA, which supports the largest humanitarian organization in the world, and former vice-chair of Amtrak. Hunter also taught as an adjunct professor at Georgetown University School of Foreign Service Masters of Science program, to list a few of his credentials. (He was also editor of both the Yale Law & Policy Review and the Yale Journal of Law & the Humanities. No wonder his dad is proud of him!)

In 2014, Hunter was a counsel with Boies Schiller Flexner LLP, a New York-based international law firm, advising Burisma Holdings, the largest independent natural gas producer in Ukraine, on its corporate reform initiatives. This was an important undertaking in securing Ukraine’s economic integrity and national security following the overthrow of its corrupt Russian-backed president, (Paul Manafort’s protege.) The former president of Poland, Aleksander Kwasniewski (co-author of Poland’s constitution) was brought on Burisma’s board to further these reforms, and he recommended that Hunter Biden who had impressed the company with his expertise be also appointed to the board. As a non-executive, independent director and not a member of the management team, he would not be expected to have a background in the oil/gas industry. Instead, Hunter’s role was in developing corporate reform initiatives.