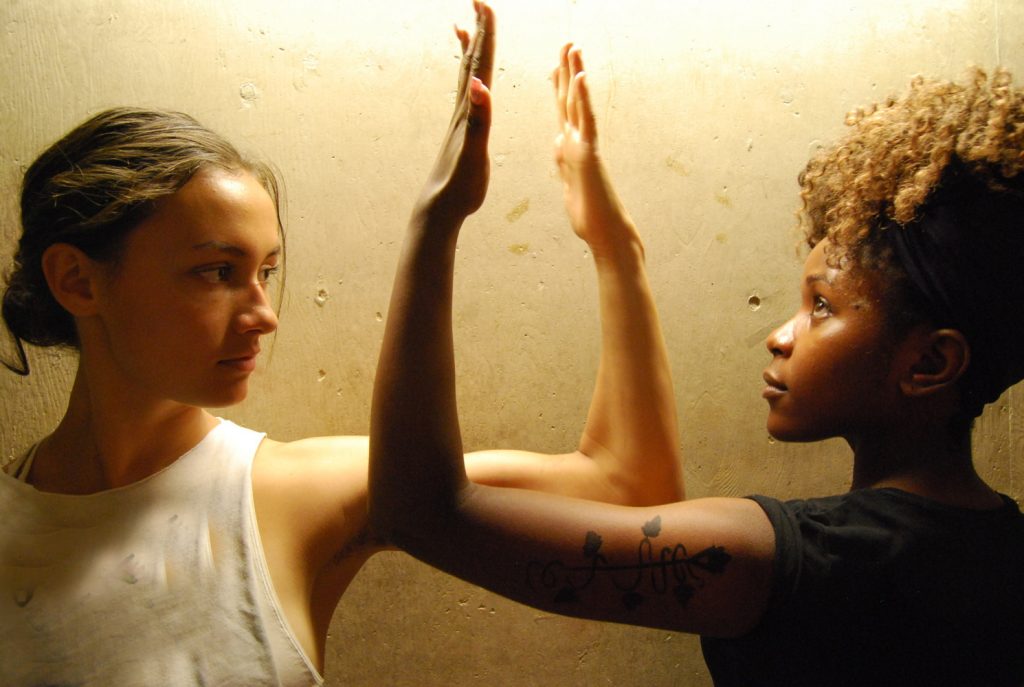 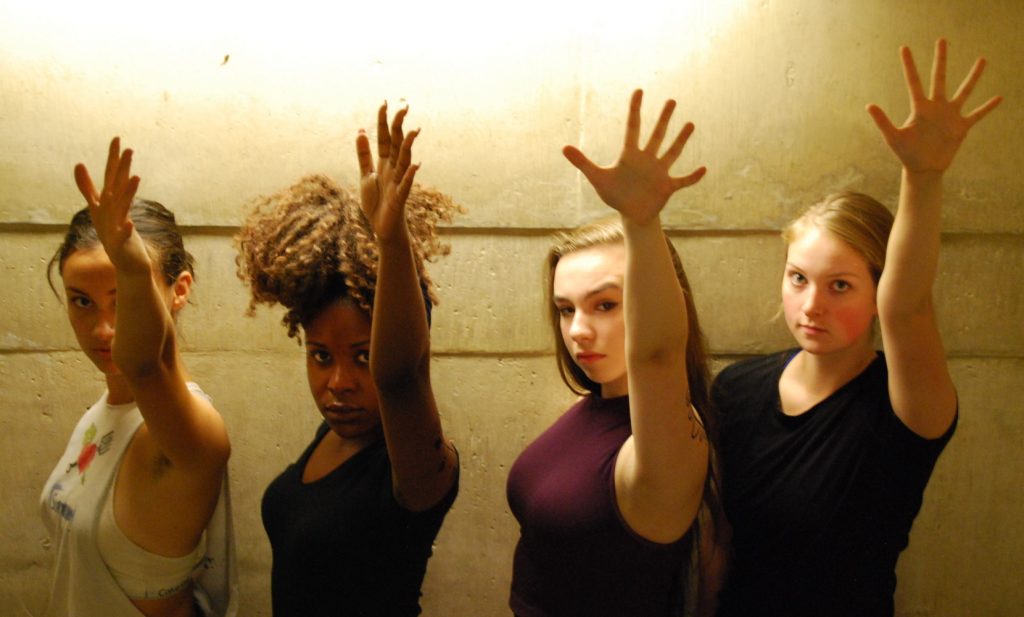 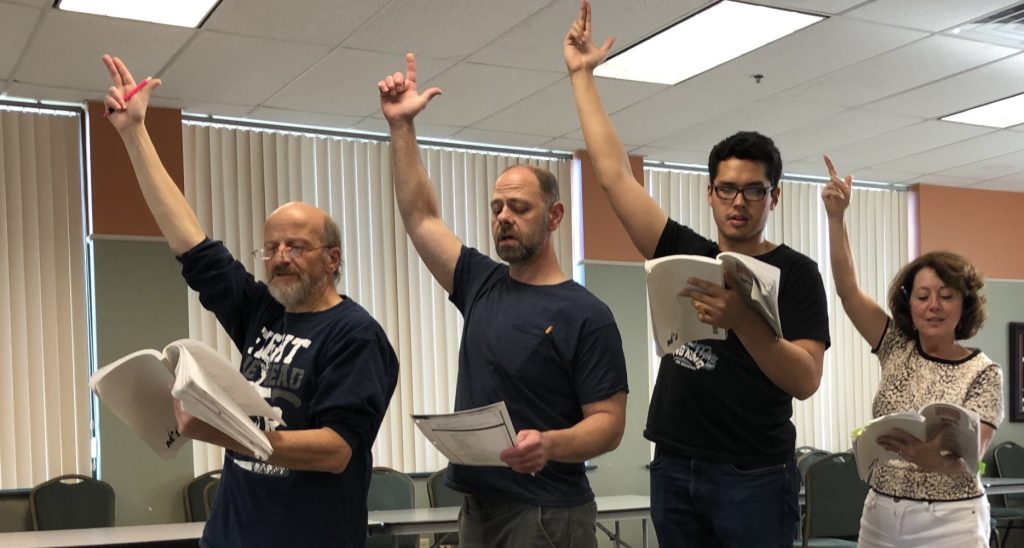 Sometimes, in your darkest fantasies, when you’re struggling to process the latest outrage from this trumped-up president — you might just entertain visions of the regicides that feature in two Valley productions. One of them is about presidential assassins, the other is a Greek tragedy brought here via Africa.

Before Hamilton burst on the scene, Stephen Sondheim’s Assassins was the top contender for Unlikeliest Premise for a Musical. In it, nine angry footnotes to history make their case that shooting the President of the United States will fix everything and, not incidentally, make them immortal, or at least famous.

From John Wilkes Booth, who killed Lincoln partly out of Confederate fervor and partly because his acting career was on the rocks, to John Hinckley, who shot Ronald Reagan to get Jody Foster’s attention, these gun-toting underdogs see themselves as men — and in two cases women — with a mission. In their crazed fantasies, they aim to avenge social wrongs and/or personal affronts. They are people for whom the American Dream has turned out to be a dud, and who think a magic bullet will finally make it come true.

For some of the would-be assassins, squeezing the trigger is a political act. When Leon Czolgosz takes aim at William McKinley, he’s acting for all the oppressed slaves of capitalist industry. For some, it’s mainly personal. Giuseppe Zangara’s poverty and despair, enflamed by the pain from his ulcer, drive him to fire at FDR’s motorcade.

In 1975, Charles Manson’s sometime girlfriend, Lynette “Squeaky” Fromme, and Sara Jane Moore, a bored neurotic housewife, both tried, separately, to kill Gerald Ford (of all people). Here, the librettist, John Weidman, brings them together in a mutual plot that is planned and enacted in a series of Chaplinesque misadventures. 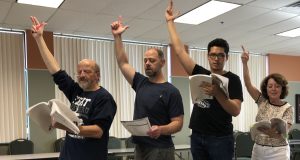 Assassins isn’t a standard theater piece, more a musical revue, its songs recalling the music of the various historical periods in a 90-minute saunter through a rogue’s gallery of losers and lunatics with one common purpose. The show was a bit of a flop when it debuted in 1990, but its reputation has grown with the years and several successful revivals. This weekend it plays in Northampton, staged by the adventurous K&E Productions, which debuted last year with another macabre Sondheim, Sweeney Todd.

Producer Ken Comia told me that, of course, “it would be hard to remove the element regarding the politics of our current time” from the choice of this production. But he emphasized that the company’s guiding focus is simply “to stage challenging and meaningful shows and to tell stories celebrating the emotions that feed the human spirit, whatever emotions they may be.”

The assassins in The Bacchae of Euripides are crazed too, in their own way. But these are not unhappy loners — on the contrary, they are a frenzied band of women, singing and dancing wildly in worship of the god Dionysus. The man they ultimately destroy is the king who has dared to ban the god’s delirious rites.

Dionysus (aka Bacchus) was the ancient god of wine, fertility, mystic ecstasy — and theater. The stage was his temple, where communal rituals gave form and substance to a people’s innermost passions. In Euripides’ tragedy, first staged 2,400 years ago in Athens, Dionysus defends his sacraments against the forces of tradition, rationalism, and propriety. His adversary is young King Pentheus, whose own mother is the leader of the dancing Bacchantes. 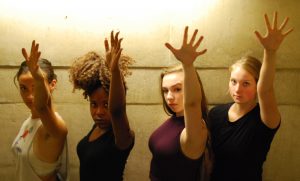 The version that plays at UMass this weekend and next is not Euripides’, but the 1973 adaptation by the Nigerian Nobel laureate Wole Soyinka. Subtitled A Communion Rite, it celebrates, in the playwright’s words, “the resources of nature” as “an extravagant banquet, a monstrous feast,” and adds a revolutionary twist. His Bacchae is “a class-conscious myth” channeling “the pent-up, frustrated energy of all the downtrodden,” adding to Euripides’ chorus of Bacchantes a second chorus, of slaves.

In a program note for her production, director Judyie Al-Bilali explains that she has set her production in 2020, “at the pivot point of a new era in human history,” and not in Greece or Nigeria but Gaia, “our beloved and beleaguered planet Earth … a sentient, living goddess.” Today, she says, “we face unprecedented environmental, ecological, and spiritual challenges. Gaia demands our attention. She calls us beyond ideology to unity.” And indeed, in Soyinka’s retelling, the bloody climax leads to a moment of reconciliation.

The play, Al-Bilali says, “illuminates primal forces [and] tells us where to look for balance in a world twisted by the desire for power and control. The Bacchantes say, Look to ecstasy, to creativity, to beauty, to joy, to theater.”