Beerhunter: A conversation with the ‘bros’ keeping tabs on all of Massachusetts’ 200 breweries 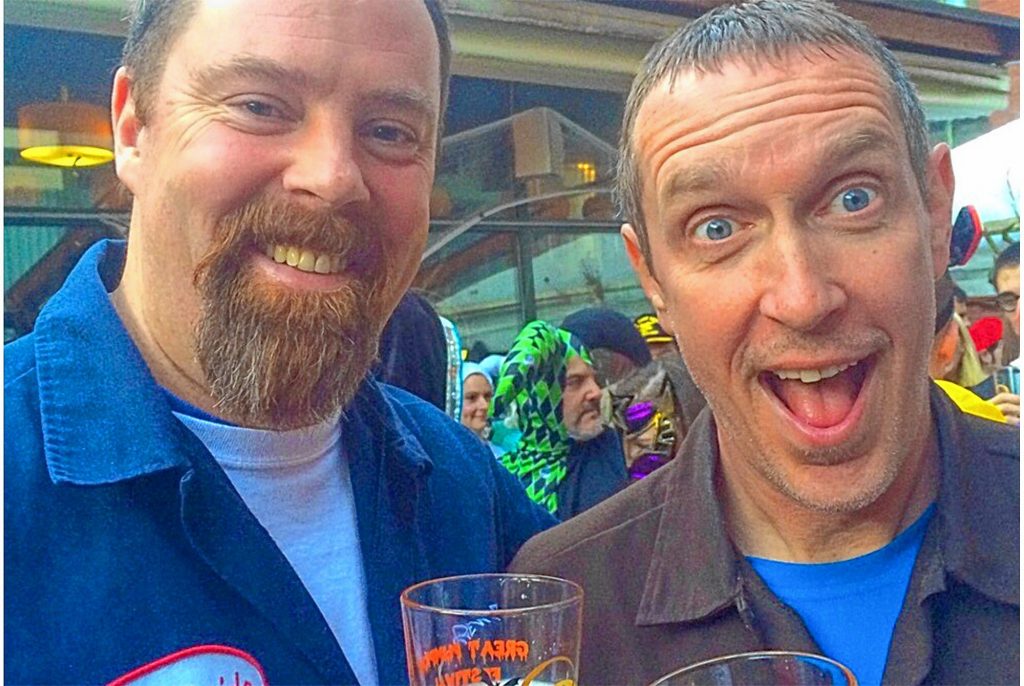 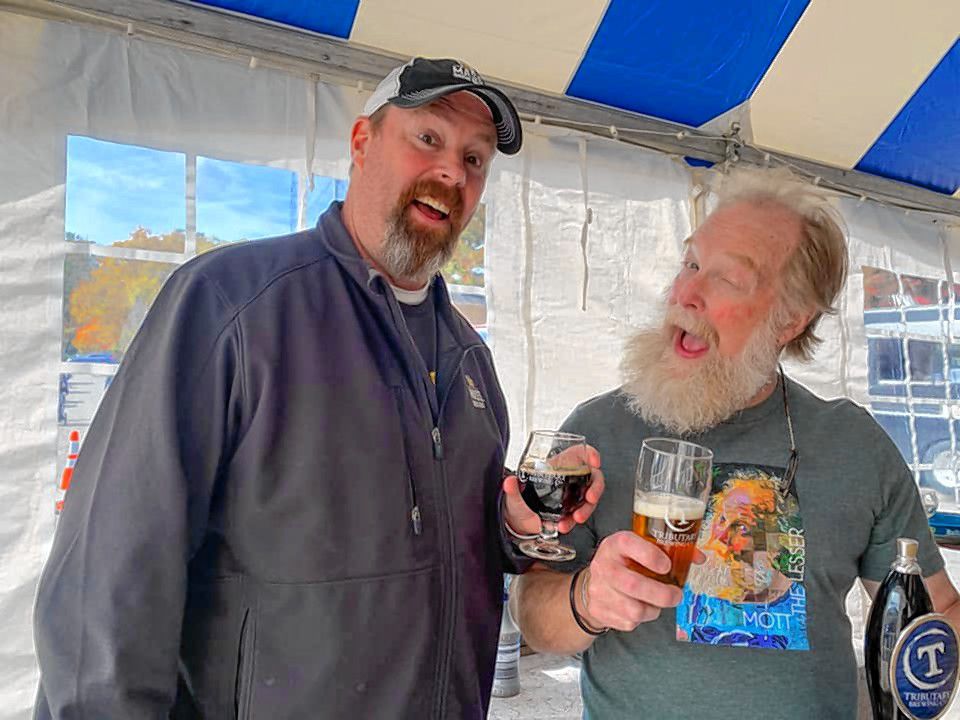 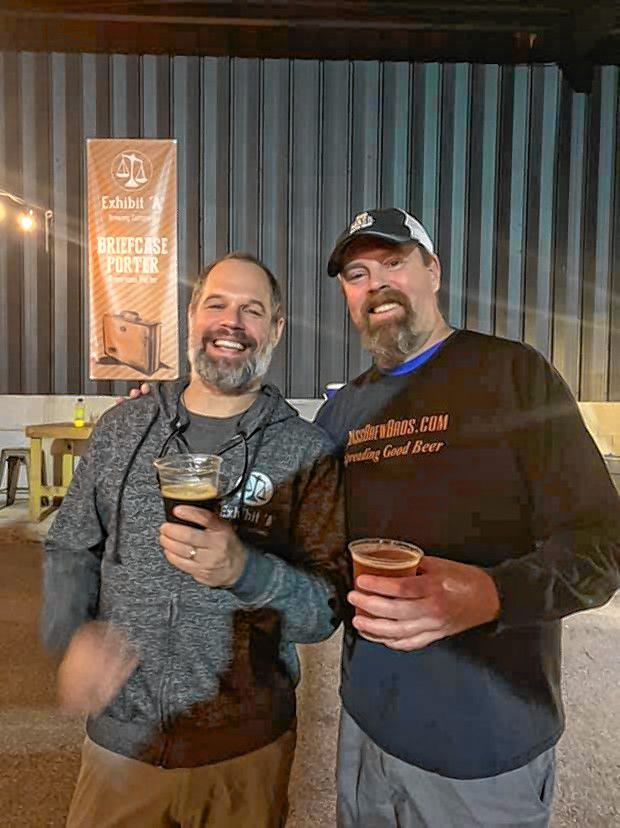 Bob Kelley (left) with brewer Matt Steinberg from Exhibit ‘A’ Brewing in Framingham. 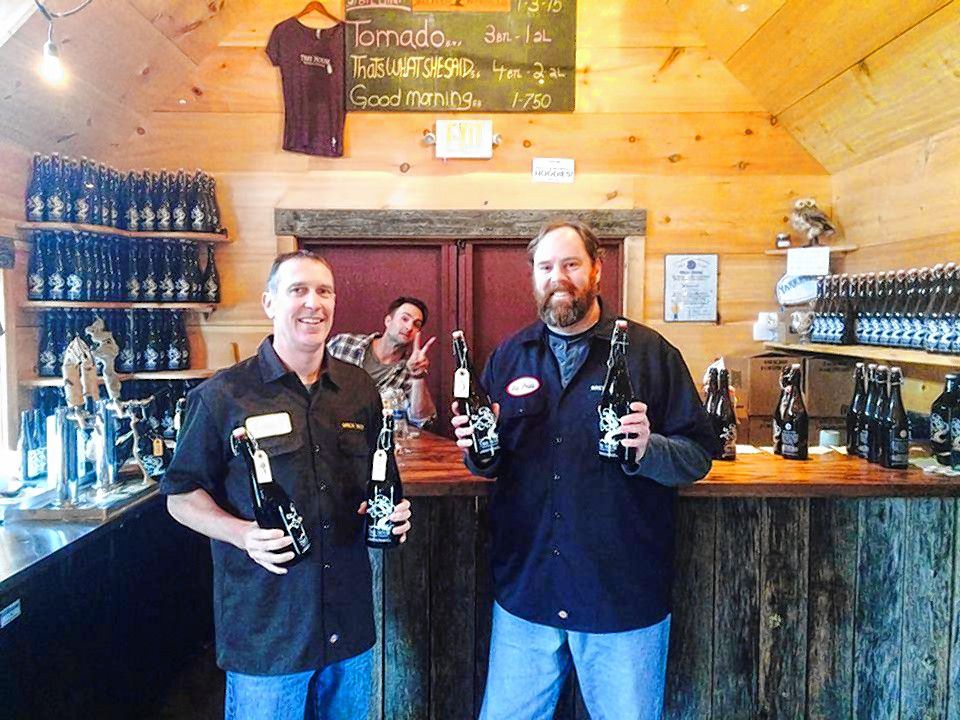 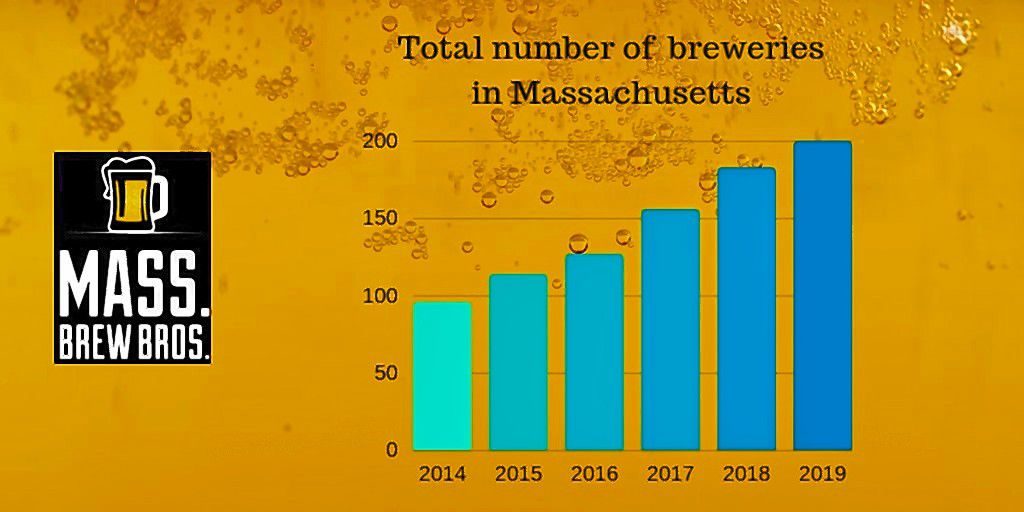 You never see the best things coming. In 1998, economist Paul Krugman predicted that by 2005, it would “become clear that the Internet’s impact on the economy has been no greater than the fax machine’s.” Today I am happy to report, from the supercomputer in my pocket, that this particular diagnosis from Krugman never came to pass.

Economists don’t know everything — not even Nobel Prize-winning ones — but Krugman’s bad guess is understandable. Unlike a fax machine, the world wide web isn’t simply something we have. Over the past two decades, it has become something we do. 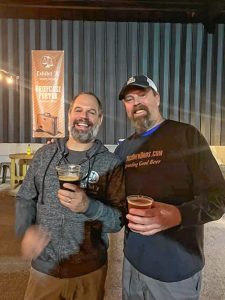 Bob Kelley (left) with brewer Matt Steinberg from Exhibit ‘A’ Brewing in Framingham.

Craft beer was similarly pigeonholed in that era, and it too broke free. In the mid-nineties, American craft beer was a mere product, sold in mysterious bottles at certain shops. But now, as my fellow craft beer fan Rob Vandenabeele put it to me this week, craft beer isn’t just something we buy — it’s something that we do together, gathered in yards and taprooms and bars far and wide.

Last year, The Atlantic referred to craft beer as “the strangest, happiest economic story in America.” That’s because, like the internet, a craft product isn’t just a product — it’s a chance for people to connect. And at their best, craft breweries serve as creative and communal spaces in our local lives.

Vandenabeele was intrigued by these spaces as they started to crop up in Massachusetts. Five years ago, he teamed up with his friend Bob Kelley to found Mass Brew Bros, a social media hub dedicated to craft beer, which has grown into a comprehensive database of every brewery opening and closing in the Bay State. Last week, the two friends crunched the numbers and announced some exciting news: Massachusetts now has 200 breweries — more than double the number they began tracking five years ago.

The figures provided by the Brew Bros — who consult with the Brewers Association and the Massachusetts Brewers Guild on such statistics — break out into 160 visitable brewery taprooms, 19 pilot or production breweries, and 21 contract brands without visitable spaces. Information on all 200 breweries is listed and updated in real-time, along with regional maps and news blog posts, at massbrewbros.com.

I called Vandenabeele and Kelley last week to ask them about this statewide milestone. The following interview has been edited and condensed.

Hunter Styles: The past five years have been busy for craft beer. What changes have stood out to you both?

Bob Kelley: Rob and I were discussing this at Tree House a few weeks ago, when we were being a little nostalgic. Five years ago, it felt like few people knew about these places. You’d only go to some hole-in-the-wall brewery if you were in the know. Now, people know a lot more about these places. But, that smallness and newness really felt different. 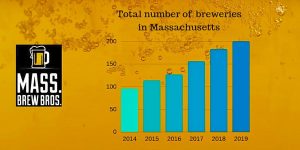 Rob Vandenabeele: It’s become a dominant cultural trend since we first started. You used to just buy something off the shelf from a smaller brewery, and maybe it was local. Now, this has become something people do on the weekends. It’s part of their lifestyle. And because of the changes to the [pouring laws] for farmer-brewery licenses, it’s exploded from less than 50 brewers to more than 200 today.

Hunter: What drew you both to craft beer culture in the first place?

Rob: I’d describe this as a hobby gone wild. We met as rival basketball coaches, and we’d get together at cool places for beers with other coaches. One of the first places we went was called Rock Bottom, which had several locations. They brewed their own beer there, and we really enjoyed that atmosphere. We saw more and more breweries popping up, so we started going to festivals. We made a short documentary on the craft beer scene about 11 years ago, which is on our YouTube channel. It just kept growing from there. 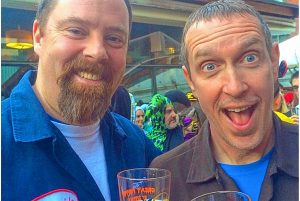 Bob: We created some social media accounts, and people started following us. As we traveled around we would learn about new breweries, but there was no one place to find up-to-date information about them. So we put the website together, starting with a map and a blog. We keep track of the whole industry, and we try to provide as much detailed information as we can. We also work with the Mass Brewers Guild, contributing news to their app, and we help them to test the GPS and keep the app updated. Now I feel like people are depending on us.

Rob: The Guild was all volunteers at that time, and they were trying to get distribution laws tweaked and things like that, which took a lot of their time and effort. Meanwhile at the breweries, people were telling us all about their fun adventures, and we had a good following on social media, so we created a tool that everyone in the state can use. It seemed to be fitting a need.

Hunter: It sounds like you talk a lot with other taproom visitors. Many of your posts also involve conversations with the brewers themselves.

Rob: One of the silly little things that jump-started this was our shirts. At one festival, we had seen some guys all wearing the same shirt, like a bowling league. So Bob and I went to an army navy store, bought some workshirts, and put our names on them. Then, when we walked into festivals, people noticed the “Mass Brew Bros” and thought we were somebody, and we got a lot of interactive opportunities that way, just from the shirts. It sent us in a fun direction, very social, and led us to where we are now. 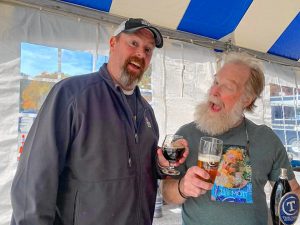 Hunter: What do you think about the brewery scene in Western Mass recently?

Bob: It seems like people are looking at ways of revitalizing old places. It’s really helpful in Western Mass to get things going in old buildings — we see a lot of that.

Rob: Brick and Feather [in Turners Falls] obviously makes some tremendous beers — they were in the Final Four tasting of New England IPAs that we did last year. Honest Weight [in Orange] has a really cool thing going. But nothing surprises us at this point — you can find a cool brewery with a lot to offer in any part of the state. Bob has been to every visitable brewery in the entire state this year, including the three or four places that opened up most recently.

Bob: A lot of people ask us what our favorite breweries are. That’s so hard to answer. If you go to Northampton Brewing, which has been around for decades, versus Floodwater Brewing, which just opened in Shelburne Falls… there’s just so many different experiences to be had. It’s similar to the eastern part of the state in that way. I think Two Weeks Notice [in West Springfield] is doing a great job, and growing fast. At a place like Black Rabbit [in Southwick], you can buy rabbit meat and sauces and wild ales! I love how people are just going for it.

Hunter: There’s certainly plenty of craft beer news each week for readers of this column to explore in Eastern Mass as well.

Rob: Yeah, if you’ve got a relative to visit, or you’re going to catch a Red Sox, Pats, Bruins, Celtics game, that’s a perfect excuse to check out the breweries here. The organizers of Mass Beer Week are really making a push to create a community within the entire state. 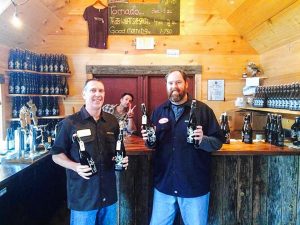 Bob: Whenever Rob and I go out to Western Mass, we’re like — how many towns are there in this state?! All the travel has really opened up the state to me, and that’s not just about the breweries. That’s why Mass Beer Week tries to unify the state — to get beer drinkers to branch out and visit new places. And we don’t want to be reporting on these breweries without actually going there, seeing the space, and meeting the people. Although, I might be reaching critical mass. If you’re taking 200 breweries, I can’t do all of them in a 12-month period. Visiting every brewery in a year is getting impossible to do.

Rob: That’s a good challenge to have. Neither of us pulls a salary from this. But it’s a really enjoyable thing to do.

Hunter: Sounds like you find a lot of your scoops during on-site visits.

Bob: Yeah, I just go into taprooms and ask people. Yesterday I was at a Guild meeting and found out about a new brewery opening in Rutland. I do more of those visits than Rob, but Rob writes 99 percent of the posts on the website.

Rob: I’m a type-A, organized person. I have a whole list of breweries that are in the planning stages and pending. And I have some detective techniques for finding licensing and listings. But also, because we were early on in this game, people who search for a tool like this give us a lot of cool leads, and send us notes about brewery news.

Hunter: What are you anticipating for craft beer growth in 2020?

Rob: It doesn’t seem like any one particular part of Massachusetts is growing faster or slower than the others. There are new breweries planned all over the place in 2020. Kismet [in Westfield] will be opening soon. Same with Loophole [in Holyoke]. A few breweries are opening up north of Boston this weekend, and a few down south are close. In Metro Boston, a couple of breweries just closed, but two others just opened, and a few more will open in Boston in 2020. It’s a fascinating time. I don’t know what they’re all thinking, but I hope they’re really thinking their plans through well. It is competitive out there right now. But there are always new ways to make it work.