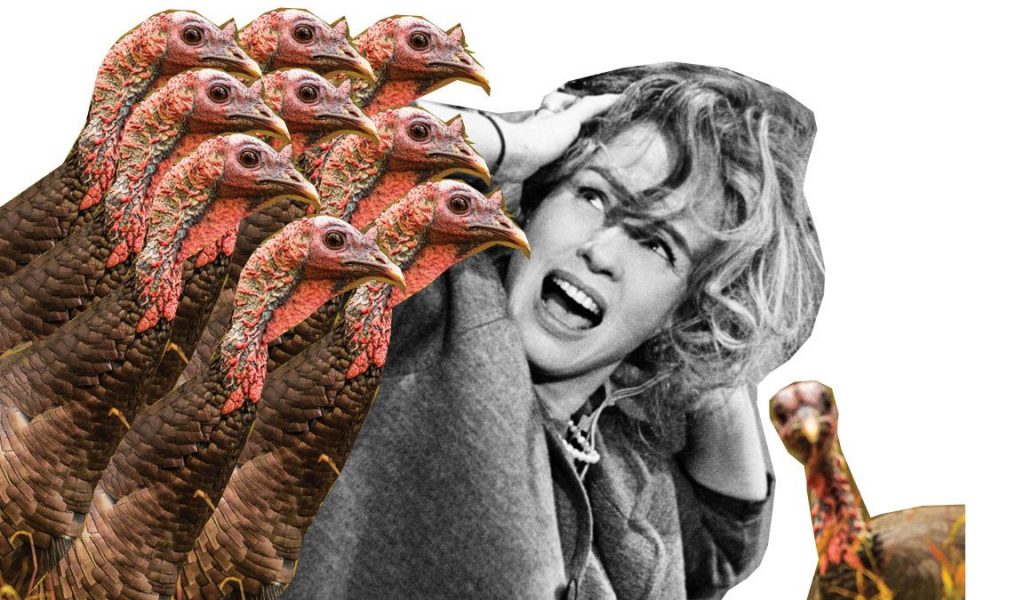 Just as Americans get ready to tuck into their annual Thanksgiving meal, wild turkeys in a New Jersey town are counterattacking. Residents in the aptly named Toms River (a male turkey is called a tom) are reportedly being terrorized by the large birds, which have been breaking windows, pecking at cars and chasing people. “I can’t get out of my door,” one resident told a local TV news station. “Sometimes I can’t get out of my car. They go to attack you.” The turkeys typically show up around dawn and dusk, and though exact numbers are not known, some reports say the birds are traveling in groups of several dozen. However, the director of a local chapter of the Society for the Prevention of Cruelty to Animals disputes the notion that the turkeys are a threat and says their presence is most likely due to a loss of habitat. And a local mail carrier said he hasn’t been bothered by the birds. “They do their thing, you do your thing,” he said. “You’re not trying to get in their way.” Experts recommend deterring turkeys by making loud noises, opening and closing umbrellas and blocking reflective surfaces — that last tactic because male turkeys can sometimes show aggression toward their own reflections.

In a “gender reveal” stunt gone wrong, the pilot of a small plane crashed in Texas after dumping about 350 gallons of pink water to indicate that a friend was going to have a daughter. According to a National Transportation Safety Board report of the crash, which happened in the town of Turkey in September, the pilot flew too slow while maneuvering at a low altitude, stalled, and then crashed into the ground. The plane “came to rest inverted,” which is a polite way of saying the plane was upside down upon crashing, and yet luckily the pilot escaped uninjured and his passenger only suffered minor injuries.

Roos in the loo

A pair of British backpackers in South Australia got a surprise when one of the two went into the bathroom in their campsite and found two kangaroos munching on a strange snack: rolls of toilet paper. Matt Trayner, who filmed the strange scene and posted the video on the internet, can be heard saying “Lads, what is going on? They’re eating the toilet paper! Guys, that’s not nutritious — what are you doing?” Trayner and a few companions had been drinking, so the sight of the kangaroos snacking on TP “made the sight even funnier,” Trayner told the UK Metro News. “They had been spotted hopping around the campsite, so they obviously weren’t too bothered about being around humans. I think they were trying to get their hands on anything to eat — they were like junkies!”

A jewelry company in Hong Kong unveiled a new product at an expo in China recently. It was a golden toilet with 40,815 diamonds embedded in the seat. The Coronet jewelry brand, owned by Aaron Shum Jewelry, unveiled the not-so-porcelain throne at the second China International Import Expo in Shanghai. The toilet is made mostly of gold with a seat of bulletproof glass and the 40,000-plus diamonds, making it a total of 334.68 carats. The golden crapper is scheduled to be inspected by Guinness World Records to verify a potential new world record of most diamonds set in a toilet. Coronet also holds nine other world records, including most diamonds set in a watch.

No stranger to controversy, Kanye West said, “I might legally change my name to Christian Genius Billionaire Kanye West for a year” during a presentation at the 2019 Fast Company Innovation Festival. The hip-hop producer turned rapper turned fashion designer turned sermon preacher has already expressed his desire to simply be called “Ye” and his sometimes outlandish claims are often made with a stonecold deadpan expression. “When I run for president in 2024, we would’ve created so many jobs that I’m not going to run, I’m going to walk,” he said, referring to his plans on creating clothing manufacturing jobs in the United States. This is the same Ye that said 400 years of slavery was a choice.

The Boynton Police Department in Florida is looking for Bigfoot. On the department’s Facebook page, they wrote, “#Bigfoot is missing.” But the police department isn’t looking for a real Sasquatch, instead they’re looking for an 8-foot, 300-pound statue of the mysterious mythical creature that was stolen in front of a mattress store called “Mattress Monsterz” last month. Police are asking anyone with information on the missing Bigfoot to contact detectives with the department.

The University of Alaska Anchorage has a new system for allowing students to pay for parking fines and help with hunger by donating jars of peanut butter or jelly to erase the fines. Two jars can eliminate $10 worth of fines, while five jars gets rid of a $60 fine. The jars will then be distributed through the UAA Emergency Food Cache at the UAA Student Health and Counseling Center. The program only runs through this Friday.

A man from Chicago, Illinois, built a life-sized replica of the Batmobile from scratch. He even added a Boeing jet engine on the back to recreate the iconic vehicle from the 1989 Tim Burton Batman film starring Michael Keaton. The man took a GM body, cut it and built a frame underneath to construct the replica. His Batmobile can also pick itself up and spin 360 degrees. But the car isn’t street legal quite yet. The man hopes to eventually use the replica car for charity fundraising events to give attention to different causes.