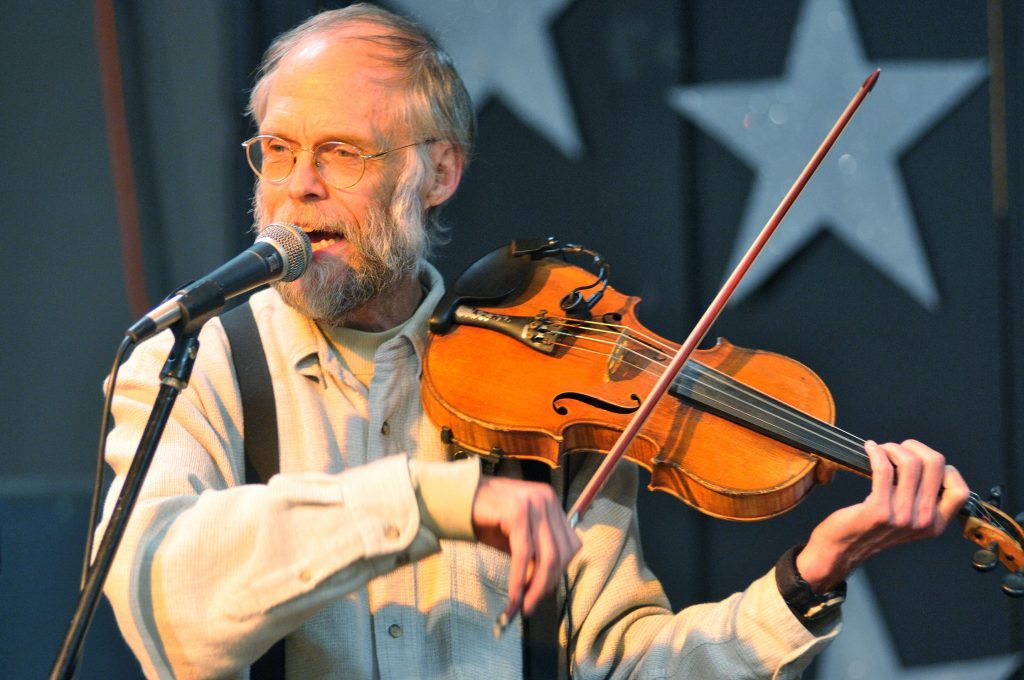 One of the first ways I got connected to Western Mass was through the vibrant contra dance community that continues to exist here. When I first stumbled on contra dance in 2002 in southwestern New Hampshire where I grew up, most agreed that some of the best dancing to be done was at the Guiding Star Grange in Greenfield. I drove with some friends to Greenfield one night that summer, and on stage — calling (“swing your partners!”) and fiddling at the same time — was David Kaynor. 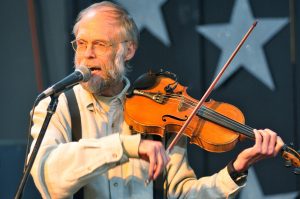 Technically, contra is a partner dance, but due to the fact that the structure of the dance sends you spinning with many others in addition to your partner — and that the culture of the dance is to change partners often — I think of it much more as a community dance. And Kaynor, who was instrumental in the contra dance revitalization in Greenfield that took place long before I walked through the doors, has always embodied that community spirit.

Welcoming and joyful, Kaynor’s strong yet gentle voice guided dancers from dance figure to dance figure while his bright fiddling and encyclopedic knowledge of tunes continues to lead and inspire musicians at all levels. Kaynor’s is a rare achievement — to master both calling and playing, and be known across the country for both. And while some of the earlier callers and leaders of contra dance had a reputation for gruffness, Kaynor, who is 71 and lives in Montague, has always been friendly, approachable, and kind.

Those are among the many reasons it has been such a hard blow to learn of his diagnosis of amyotrophic lateral sclerosis (ALS), also known as Lou Gehrig’s disease. The degenerative disease, which has no cure, weakens muscles, especially those associated with speaking, swallowing, and breathing. That has meant the end of Kaynor’s calling — as he is unable to speak — though he still plays the fiddle.

“My playing has deteriorated,” Kaynor told Davis, typing his responses which were then vocalized by a computer. “I don’t have the unconscious muscle control in each hand that I used to have. So my playing takes more concentration than simply playing notes in time and in tune. I feel like it’s way more work. I have to focus more on the physical act of playing, so I don’t get the emotional experience of it. What I miss is the emotional immersion.”

Inspired by Kaynor, as well as others, I learned to call dances, too, and started a dance at my college in the early ‘00s. Since then, I’ve called in 20 states and Canada. We don’t know each other well, but based on the many times I’ve seen him perform I consider Kaynor an important mentor. I think about him each time I’m on stage, and often on the dance floor, especially when dancing at the Guiding Star Grange.

In September in Putney, Vermont, I had my most recent opportunity to call a dance with Kaynor leading the band. He wasn’t able to speak at the time, but still communicated with hand gestures, smiles, and other movements. The most common one was a thumbs up, and I couldn’t help but think this summed up his positive attitude well. It was a good experience sharing the stage with him, something I’ve done several times before, but I also saw up close the obstacles he faces as the disease progresses.

Davis’s article, which described a well-attended reunion dance Kaynor played in October and a citation he received from the Massachusetts House of Representatives for his “steadfast allegiance” to traditional music and dance, also got into Kaynor’s difficulty breathing and sleeping, and some of his remorse for the abilities he’s lost and those he expects to lose.

“It was really encouraging,” Kaynor said about a recent fiddle practice session with some fellow musicians. “But at the same time, it makes the prospect of losing the ability to play with and for these people all the more troubling. I’m filled with gratitude and a sense of accomplishment. On the other hand, it adds to the grief that comes with the feeling the end is in sight.”

Kaynor still performs frequently, including this past weekend at an event called “Fiddle Hell” in Westford, each third and fifth Friday at dances at the Grange, and an upcoming performance on Thursday, Nov. 14, 7 p.m., at the Florence Congregational Church, 130 Pine St., Florence. He continues, as he always has, to be inspiring and to bring joy through music and dance. It is difficult to know he is experiencing pain and sadness. At the same time, I feel grateful to him for all he has given and continues to give to our community.

A quilt raffle to help support his expenses is at vermontviolins.com/new-products/vermont-fiddle-orchestra-raffle-tickets.