Greenfield is now a ‘safe city’: What’s next for the sanctuary movement? 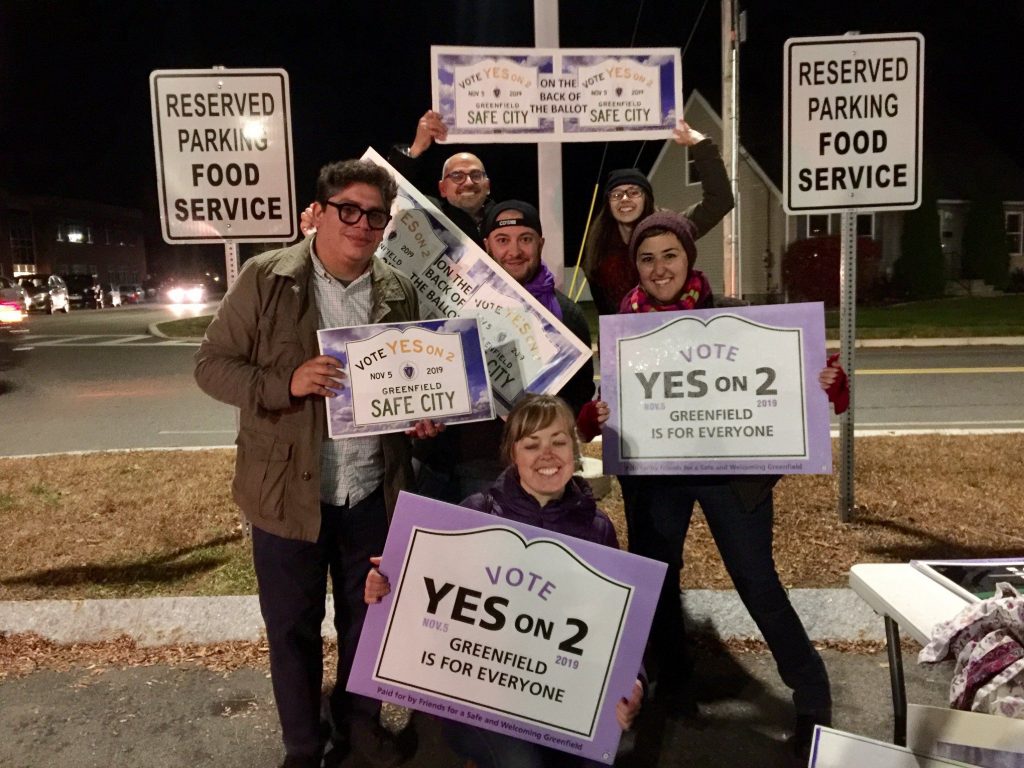 Yes on 2 advocates on election night in Greenfield. 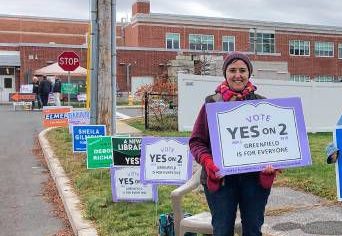 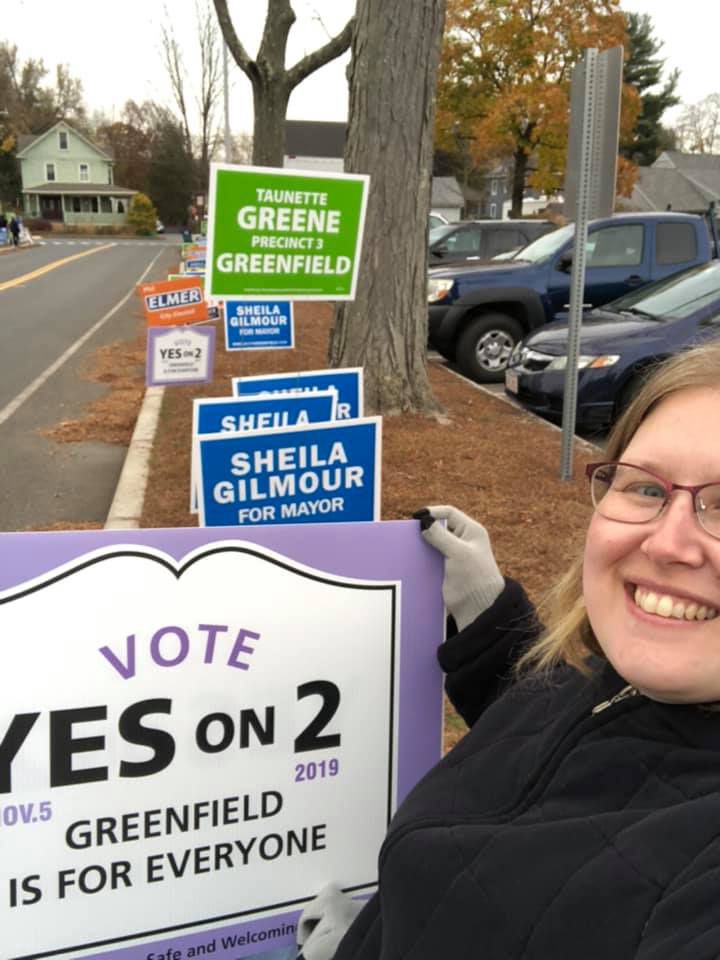 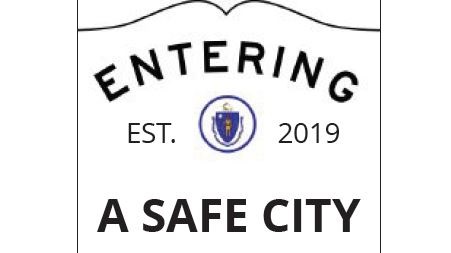 After last week’s election, Greenfield joins Amherst, Easthampton, Holyoke, Northampton, and Springfield as communities in Western Mass that have rules that limit cooperation of city employees with federal immigration enforcement.

A ballot question in favor of Greenfield adopting a “Safe City” ordinance won with 56 percent of the vote and will mean that city officials are prohibited from asking about a person’s immigration status, discriminating against an institution providing refuge to immigrants, and taking law enforcement action against someone on the basis of their perceived immigration status.

Like so many other towns and cities in the United States debating local involvement with a federal crackdown on undocumented immigrants and a rise in deportations in recent years, Greenfield residents grappled with the prospect of becoming a so-called Safe City. The removal of undocumented immigrants rose between 2016 to 2018 — from 65,332 in 2016, to 81,603 in 2017, to 95,360 in 2018 — according to the “Fiscal Year 2018 ICE Enforcement and Removal Operations Report.”

Even though the Greenfield City Council had approved the resolution in the summer, a citizen’s referendum forced a city-wide vote on the issue, and even as proponents are celebrating their electoral victory, there are efforts underway in other communities to implement similar policies.

Elsewhere in the country, a similar push for protections for immigrants was defeated. In Tucson, Arizona, voters rejected an initiative to give the city sanctuary status for immigrants in a state where police are allowed to detain people based on their immigration status.

In Massachusetts, some lawmakers are attempting to pass legislation that would prevent state officials from inquiring about residents’ immigration status in non-criminal matters. 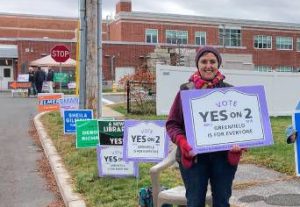 Rachel Gordon, a volunteer with the group “Greenfield Safe City — Yes on 2,” said the campaign sent out 4,000 informational postcards, set up two phone banks and worked to counter much misinformation surrounding Greenfield Ballot Question 2, the Safe City ordinance the group advocated for.

There is no legal definition of a “sanctuary city” and the term is generally used for jurisdictions that have taken steps to prevent the deputization of local law enforcement as immigration agents. Communities have also taken different steps; in Amherst, Easthampton, Springfield, and Greenfield there are local laws preventing city officials from asking residents’ about their immigration status.

In Holyoke and Northampton, there are executive orders signed by their respective mayors instructing their police departments not to comply with federal Immigration and Customs Enforcement (ICE) retainer requests, which are voluntary. “Safe City” advocates often cite the 10th Amendment of the Constitution which prohibits municipalities from having to enforce federal law. 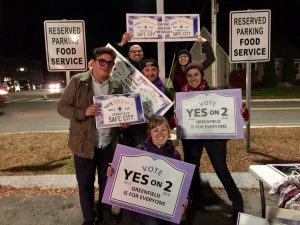 Yes on 2 advocates on election night in Greenfield.

Part of Gordon’s work with the Yes on 2 campaign was to dispel the idea that municipalities are passing legislation that somehow protects undocumented immigrants that commit crimes.

“People spread this idea that people can hide here, somehow hidden from the law, and that is not at all true,” Gordon said. “The federal government can definitely come here and do what they are going to do and this will not stop them.”

Other claims Gordon heard from opponents of the ordinance were that immigrants commit crimes at higher rates or that their taxes would go up. Research from the CATO Institute, a Washington, D.C. public policy organization, has found that immigrants, including undocumented ones, commit crimes at rates that are significantly lower than native-born Americans.

In a Greenfield City Council subcommittee meeting in July, resident Tim Mosher said he was against the ordinance passing.

“I see this as a setaceous and illegal action this town is taking. You’re violating federal law,” Mosher told councilors.

City Councilor Isaac Mass also expressed his reservations for the ordinance at the same meeting.

“The encouragement of people coming to the U.S. in an unlawful manner is not the message we want to send,” Mass said. “I’m sympathetic to the humanitarian issues at the border and in our own community, respectively, but I don’t think we should say we’re going to ignore the law.”

The ordinance is important, Gordon said, because it will mean that residents who call the police or need an ambulance will not fear that their immigration status will be called into question and will not “fear that they will be jailed or deported.”

Additionally, immigrants will be able to enroll their children in the school system without being punished, Gordon said.

The road to Greenfield officially becoming a “Safe City” had its bumps along the way. In July, the City Council approved a Safe City Ordinance, but then it was temporarily suspended after a councilor submitted a motion to reconsider. Even after Mayor William Martin vetoed the ordinance and the Council reaffirmed its vote the matter still wasn’t settled.

A citizen’s referendum submitted to the City Clerk’s office sought to overturn the ordinance by putting the issue on the ballot in last week’s election.

Northampton this week began the process of getting a “Safe City” ordinance on the city’s books. Beyond prohibiting the police department from detaining immigrants for ICE agents, the proposed ordinance would prevent any city employee from asking about a resident’s immigration status.

Mayor David Narkewicz signed an executive order in 2014 in response to requests from the federal government under the Obama administration for police to detain people for an additional 48 hours after they would normally be released.

These requests from ICE are not obligatory and are intended to give federal authorities more time to take immigrants into custody for deportation or other proceedings. Nothing in the “Safe City” ordinance, however, prevents city officials from providing federal law enforcement agencies citizenship status or other related information in criminal cases

“Sanctuary status does not say you can commit crimes in our city,” Narkewicz said. “That’s not what it says. What it says is we will follow the law and if there is a warrant for arrest, we will honor that warrant. We won’t honor it for someone who doesn’t have a warrant for arrest with no criminal proceeding or charge and we won’t hold someone without some kind of lawful court document or warrant.”

The city’s Committee on Legislative Matters is working to have the ordinance comply with the city’s charter before recommending the measure to the full Council, said Councilor Bill Dwight. The city’s subcommittee met on Nov. 12 to discuss the proposed ordinance.

“The concern is that you don’t want residents in the community worried about going to the hospital ward or reporting a crime if they are a victim of domestic abuse and not being reticent based on their residence status,” Dwight said. “It affords protections and confidence they can work and function in the community as anyone else without being punished or deported at the very least.”

President Donald Trump and the Justice Department have threatened to withhold federal funding or to forcibly send migrants who arrive at the border to so-called sanctuary cities, threats that have been subject to federal lawsuits.

A federal appeals court decided unanimously in October that the Trump administration may not force Los Angeles to help the government deport immigrants as a condition of receiving a federal police grant. The city of Los Angeles had sued the federal government for withholding grant funding because it would not cooperate with immigration agents.

In a separate case this past April, the Ninth U.S. Circuit Court of Appeals upheld California’s sanctuary state law and rejected the Trump administration’s claim that the law interferes with federal immigration enforcement in California. The court ruled that the state has the right to “refrain from assisting with federal efforts.”

The Trump administration is seeking review of the case from the Supreme Court which has yet to weigh in on the debate of funding restrictions for sanctuary states and cities or jurisdictions that limit cooperation with immigration enforcement.

The Yes on 2 campaign collaborated with the Resistance Center for Peace and Justice along with the ACLU Immigration Protection Project to rally support for the Safe City ordinance in Greenfield.

Javier Luengo-Garrido, a coordinator with the ACLU project, said the Safe City ordinance will help immigrants feel more welcomed in their communities.

“We want them here and they are part of our community,” Luengo-Garrido said. “They contribute to our community, their kids go to school here, they pay taxes, they work in the city … The city ordinance is a tiny step to make them more comfortable.”

The language of Narkewicz’s executive order did not go far enough in protecting residents from having their immigration status questioned by school officials or other city employees, according to Luengo-Garrido.

“No city officials should collect in any form or ask in any form someone’s immigration status,” he said. “It’s not relevant to what the city does.”

At the state level, lawmakers have filed the Safe Communities Act to declare Massachusetts a sanctuary state, but still honor detainers for criminal suspects. Gov. Charlie Baker has said he does not oppose cities and towns that adopt sanctuary policies, but he has threatened to veto the sanctuary state bill if it reaches his desk.

The federal government’s attempts to request local police departments to detain people without a criminal basis have not only created a moral issue, it’s forced local police departments to choose to voluntarily accept administrative retainer warrants from ICE and harm their relationships with the communities they serve or fear repercussions from a vengeful Justice Department that threatens to withhold grant funding to sanctuary communities.

A Maryland police chief, J. Thomas Manger, speaking on behalf of the Major Cities Chiefs Association, told a U.S. Senate panel in 2009 that his department’s ability to police becomes more difficult when trust is eroded with an immigrant community.

“It’s tremendously challenging to deliver police service to a community of people who are afraid to have any contact with police. The results are an increase in unreported crime, reluctant victims and witnesses, and the targeting of immigrants by criminals, because the bad guys know that many immigrants will not call the police,” he said.

State Rep. Lindsay Sabadosa, D-Northampton, says she supports the Safe Communities Act, a bill introduced to the Statehouse which has 85 co-sponsors to date, a majority of House members. It would limit the cooperation of local law enforcement with federal immigration agencies to prevent local authorities from essentially becoming an extension of immigration authorities.

“It’s so important that everyone feels safe and is able to communicate and report crimes to local police,” Sabadosa said. “It’s also really important for local entities and towns not to use our resources for the federal government. The federal government is asking many municipalities to go beyond their scope of practice with no additional resources … It’s an undue burden.”

Sabadosa said she is also in support of Northampton passing a Safe City ordinance because it bolsters her argument for the bill in legislative sessions if the ordinance is to pass.

When the state Safe Communities bill has its hearing in December, Sabadosa can tell fellow lawmakers, “Not only do I support my constituents, but my city has mandated that I come and tell you this is the will of the people.”

Luengo-Garrido said he hopes to see other communities and the state follow in the footsteps of Greenfield and other communities in terms of creating inclusive environments for immigrants in the face of mounting threats from a hostile federal government.

“Things are changing by the day with this (federal) administration,” Luengo-Garrido said. “We don’t know what will happen tomorrow or next week but we know we are going to keep fighting.”

Luis Fieldman can be reached at lfieldman@valleyadvocate.com