Valley Show Girl: Connecting the Living with the Dead 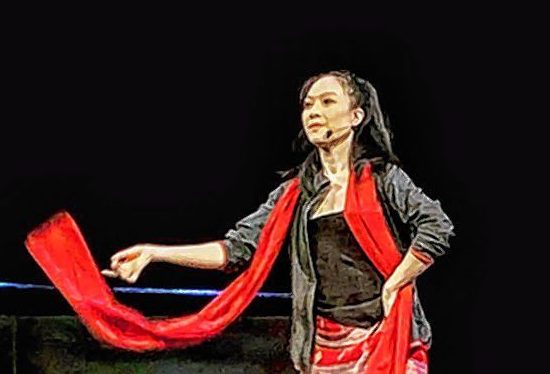 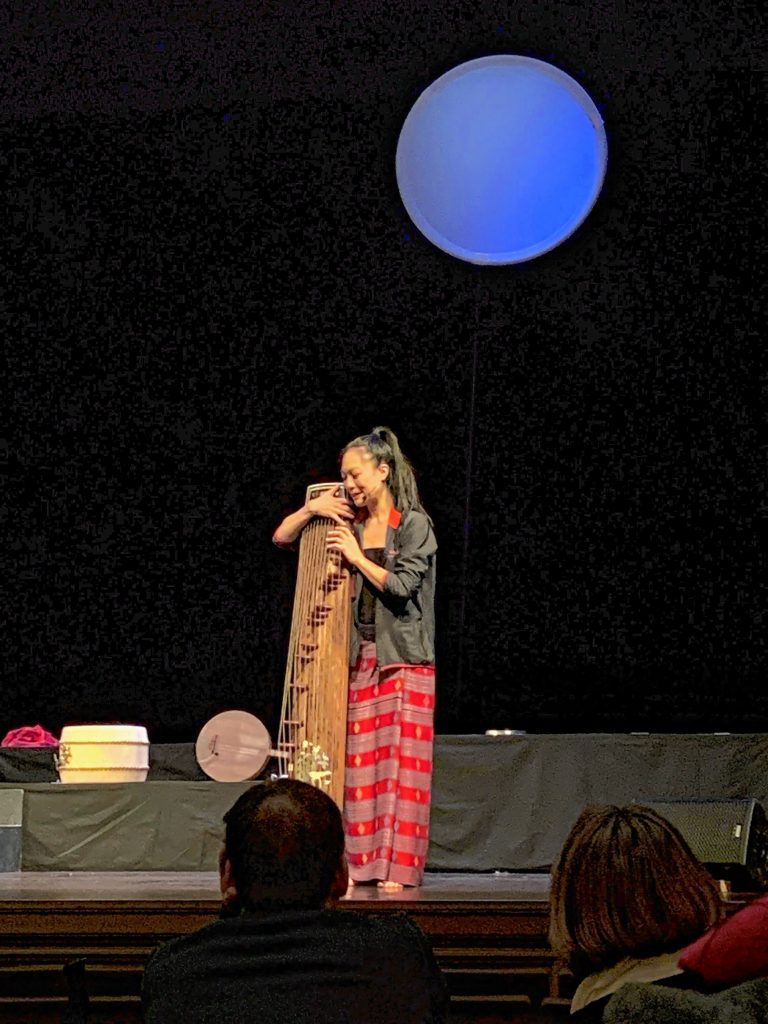 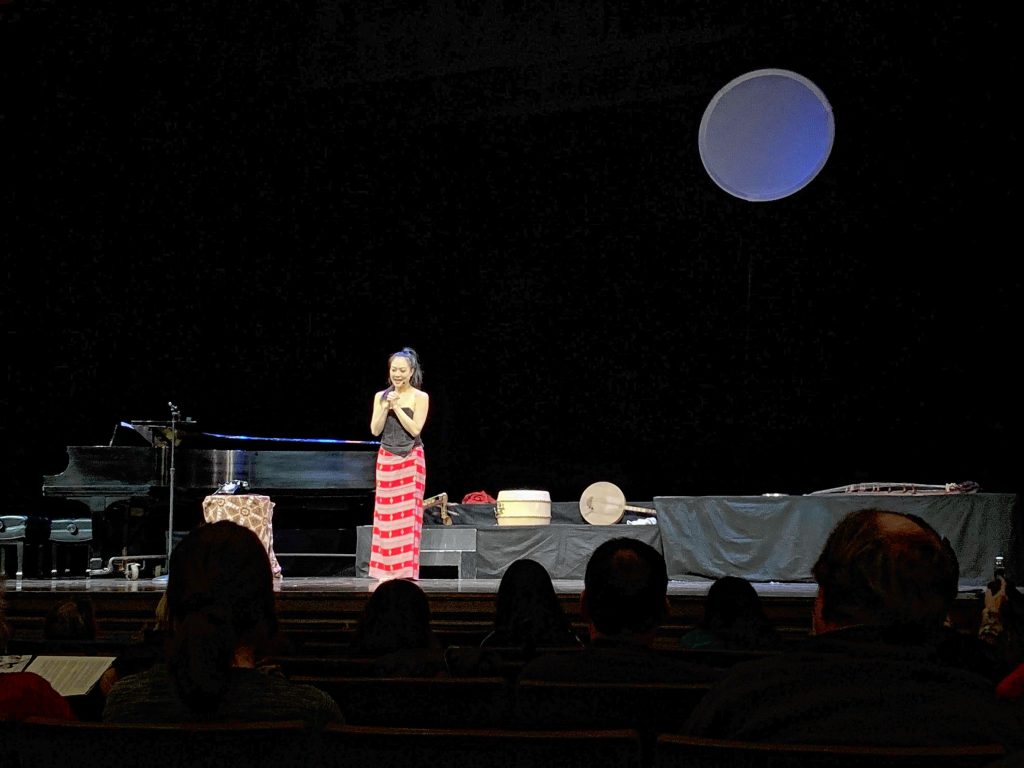 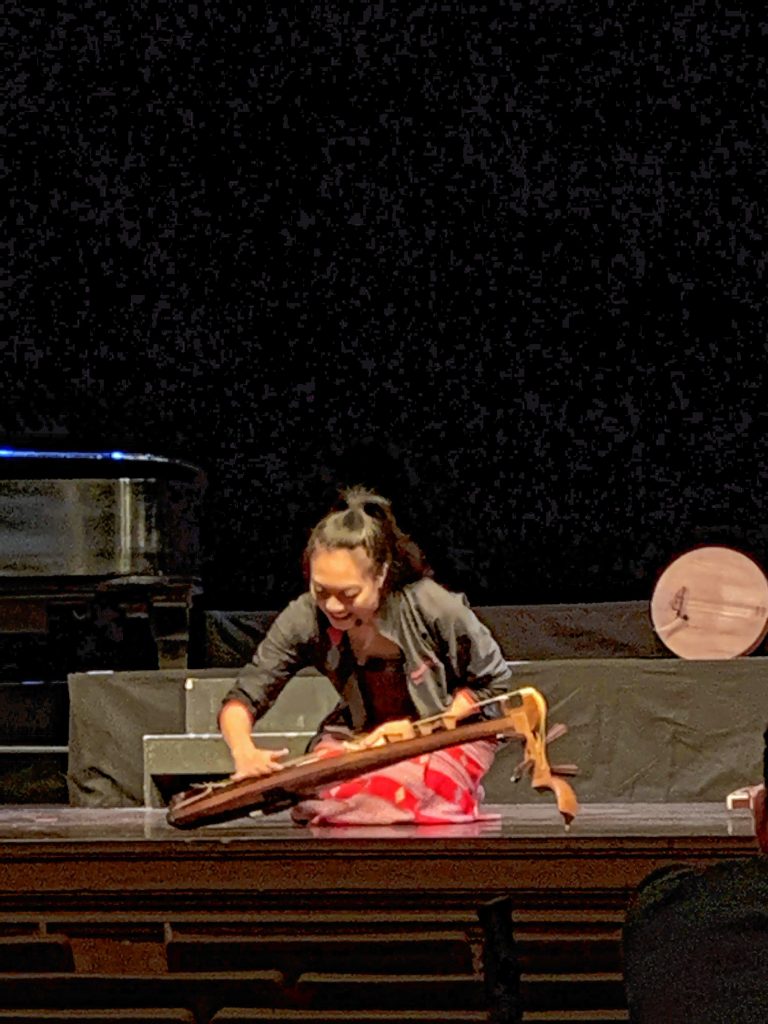 A couple months ago, I was going through the Fall/Winter Fine Arts Center booklet, checking out the upcoming events at UMass. When I started reading the description to the Jen Shyu: Nine Doors performance, I was highly intrigued. I soon after acquired tickets for the event and waited in curious anticipation until the event. 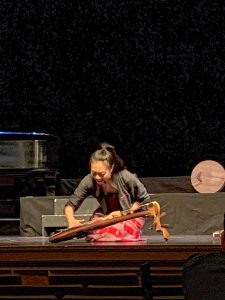 Shyu is a multilingual vocalist, multi-instrumentalist, and has a background in ballet. Her latest solo performance project, “Nine Doors” is an example of the pure talent that radiates from this woman. Making her Western Mass debut, she introduced us to her piece, which was presented by Magic Triangle and Asian Arts & Culture program at UMass Fine Arts Center.

“I wanted to do something different,” Shyu explained to us from the stage after she first appeared. “I learned it in ballet school.”

She wanted us to find a partner, preferably someone we didn’t know. I cheated and my partner was my date for the night, my best friend of over 20 years. We stood and faced each other for the exercise Shyu instructed from the stage. We held hands and pushed our arms back and forth really fast all while saying “Shit, shit, shit, shit.” When she realized there were some younger kids in the audience she told us it was the “Shoot Shake” but that shoot wasn’t what she had normally called it.

It was a way to relax your nerves and relax before the performance. We also did meditating breathing exercises, again, instructed by Shyu from the stage. Inhale 1, 2, 3 … hold. Exhale 1, 2, 3, 4. Repeat. “This is a wonderful way to calm,” she said. I was really curious about what we were about to get ourselves into.

“For the next hour,” Shyu calmly stated, “think about someone you miss.” I immediately thought of my Memeré who passed away 17 years ago and who I feel with me often. I didn’t have to ask my friend, I knew she was thinking of her father who passed away a few years ago. 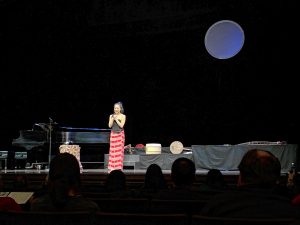 Shyu continued on and explained to us the background story to the piece she was about to perform. “Nine Doors” is a musical ritual and celebration of loved ones. Shyu has lost her friend and his pregnant wife in a horrific car accident. Their 6-year-old daughter was the only one to survive the crash. The performance is dedicated to them and the 6 year-old is the main character in the story.

The performance also intertwined stories of powerful female legends “from the Wehali Kingdom of Timor to the Korean folkloric myth of Baridegi.” A phone booth in a gardener’s yard in Otsuchi, Japan, took on a main role as well.

When telling the story of the phone booth, Shyu explained that after the 2011 tsunami in Japan, people from all over came to visit the phone booth as a magical vessel that allowed them to communicate with their lost loved ones. “What if the wind could carry the messages from the living to the dead,” Shyu said the owner had mentioned to her. 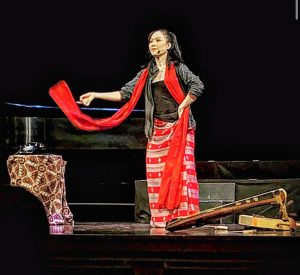 After the introduction, Shyu went into character mode, and the lights dimmed. Elegantly moving her body, she sang a cappella and then picked up her first instrument to play. The vocals, instruments, and dance moves were all woven together in each “song” making them one in the same.

The telephone on the stage rang and Shyu picked it up. Over the speakers was the story of the accident, told almost as if it were a news clip. Assuming it was Shyu’s voice previously recorded for the performance, the emotions both from the voice and from her actions on stage were now being felt throughout the audience.

My eyes became blurry from the tears that formed, and I started to hear sniffles and interrupted breathing behind and around me from others.

Shyu hung up the phone and continued into song. Her voice alone was so powerful and absolutely beautiful. She morphed from English to Japanese, from poetry to an operatic tone. 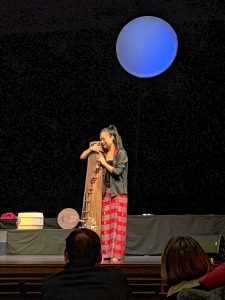 She paired each instrument with a different style of vocals and a different emotion. Almost as if each instrument portrayed a human and her vocals were not only telling us their story, but showing the emotions that were connected to the person/story. All while showing off her immense vocal range.

She gracefully hopped around the stage barefoot reenacting the event, picking up one instrument after another, each song melting into another. She took something horrific and traumatic and made it into a beautiful, intense work of unforgettable art.

Towards the end of the performance, there was a part in which her character loses it and laughs devilishly that turns into a devastatingly sad cry. If she puts herself through that for each performance, I applaud her. That part was intense and I doubt that cry was staged. She’s confident in her work that at times is so unbelievably vulnerable.

It ended with her walking into the shadows, off stage, after the last poem was sung. “Yesterday the company of friends brought happiness … Today I am alone, but not lonely.”

For more information about this artist and my latest obsession, check out her website www.jenshyu.com. Also take a look at what UMass FAC and the Asian Arts & Culture program have to offer fac.umass.edu.