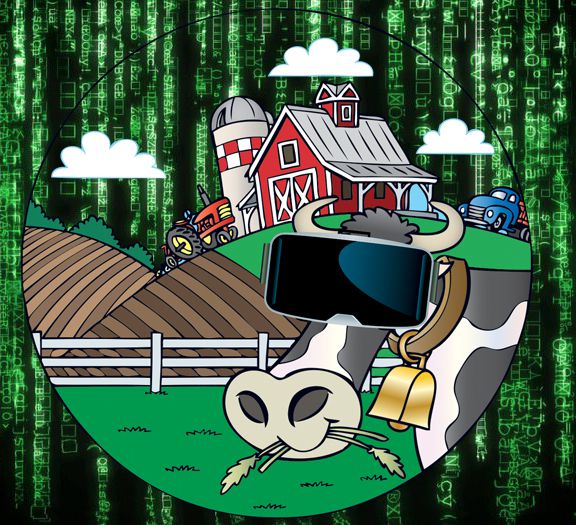 Next stop, The Matrix

Farmers in Moscow are now experimenting with virtual reality headsets to help improve milk production among cows. The thought is by rigging a VR headset on cows that simulate tranquil experiences, it will create a calmer atmosphere for the cattle to yield greater quantities of high quality milk. Or so farmers hope. Underneath the customized VR glasses, cows were living in their version of paradise: an expansive field under a summer sun. During this first test, it was unclear the impact VR glasses had on milk production, but the experiment found that cows had a decrease in anxiety and increase in the mood of the herd.

The pig steals the show

Journalists have to contend with some tough interviews and reporting conditions at times, but they generally don’t have to deal with what a Greek TV reporter recently encountered. It seems journalist Lazos Mantikos was trying to report live from the scene of the beach town of Kineta, devastated by torrential rains, when a large, speckled sow began chasing him. As the viewers of “Good Morning Greece” watched, anchor Giorgos Papadakis said they would go live to the scene for an update on the weather, but a breathless Mantikos then was seen running in circles, saying “Giorgos, can you hear me? We have a pig here that has been chasing us since this morning … sorry, guys, I can’t stand [still] because it’s biting me.” As the newscasters back in the studio laughed helplessly, Papadakis said he’d give Mantikos time “to repair,” moments before the feisty sow chased the reporter out of camera range.

Wrong place at the wrong time

A Washington Post food critic accidentally exposed a married man’s affair in a recent restaurant review. In a weekly online Q&A with the food critic, a woman claimed a photograph in his column revealed her husband with his mistress. The woman wrote, “Well Tom your latest review is accompanied by a picture of my husband dining with a woman who isn’t me!” She went on in the post, telling the critic that once he was confronted with the photo evidence, he confessed to the affair. “Just thought you’d be amused to hear of your part in the drama,” she added. “This Thanksgiving I’m grateful to you for exposing a cheat!”

Don’t climb down your chimneys, kids

It was a bit of Santa Claus magic that an Arizona teen didn’t manage to pull off: after coming home from a late night, the teen tried to sneak into her house by shimmying down her own chimney after she found the door locked. The problem was that the flue was shut and she couldn’t get into her home, nor could she shimmy her way back out. She then “freaked out,” according to a friend who tried to help her sneak in, and screamed to call 911 — remaining yelling for the duration of the 90 minutes she was stuck. Responders came to hoist the teen out of the chimney, and she emerged covered in soot, but in good enough condition to refuse medical attention. Her parents, however, were reportedly “really mad.”

Normally we don’t write about terrorist attacks here at Bizarro Briefs, but most terrorist attacks don’t include a member of the public using a five-foot tusk from a sea creature to help subdue the attacker. During a knife attack on London Bridge last month, someone who happened to be there is believed to have pulled the tusk from the wall of Fishmongers’ Hall and used it on the knife-wielding attacker. The narwhal, a type of whale known as the “unicorn of the sea,” has a tusk that grows out of its forehead that can grow to nearly 9 feet. The tusk-armed hero was assisted by two others, one of whom used a fire extinguisher, in bringing down the accused terrorist. Score one for ordinary people, and bizarre sea creatures.

A former Russian soldier who was nicknamed “Popeye” after artificially creating huge, bulging biceps had to undergo surgery to save his life — including having doctors remove about 6.6 pounds of petroleum jelly that had formed solid lumps in his arms, blocking blood flow and creating scar tissue. Kirill Tereshin, 23, was warned he might die or need to have both his arms amputated by surgeons at First Moscow State Medical University. The doctors also had to remove about 3 pounds of dead muscle from Tereshin’s arms and said that they would need to perform additional surgeries to take out all the vaseline-like jelly from his arms. The Metro UK News reported that there have been growing cases of Russians trying to bulk up or do a sort of plastic surgery on the cheap by injecting themselves with petroleum jelly, including in the face, breasts and buttocks.

Message in a Bottle in a Wall

Construction workers at a college in New Jersey made a surprise discovery while renovating the Newark school’s College Hall. Inside a wall was a message in a bottle from 1907, which was left by the college’s original builders. The 112-year-old message read, “This is to certify that this wall was built by two bricklayers from Newark, N.J., by the names of William Hanly and James Lennon, members of No. 3 of the B.M.I.U. of America.” The message in a bottle was discovered when workers hit a void in the wall and heard the sound of glass breaking.

That’s not a fish

More than 100 years after World War I, it’s not uncommon for people across countries in Europe to find leftover remnants from “the war to end all wars” such as bombs, grenades, bayonets, and rifles. But one man in Michigan found a World War I German grenade far from the front lines while using a magnet during a fishing trip in a river. The man was fishing in the Grand River near the Sixth Street Bridge in Grand Rapids, Michigan, when his magnet pulled up a device that police later identified as a German Granatenwerfer mortar. The device is being stored safely by the police department and will be detonated using C4 explosives. The man who caught the grenade had been magnet fishing for about a month and had pulled up knives previously, but described the discovery as “the first cool find” during his hobby.

A baby fur seal ended up wandering into a California parking deck, but the local fire department picked it up, after which it settled in for a nap at the station. The Redwood City, California, Fire Department dubbed the baby seal “Santos” and stated it was found by a resident this past Sunday. Firefighters brought the small animal back to the station, and after which it was picked up by experts with the Marine Mammal Center in Sausalito. A spokesperson for the center stated it’s unusual for northern fur seals to wander on land because the species spends most of the time in the open ocean. The baby seal is being cared for at the center with plans to eventually release it back into the wild.