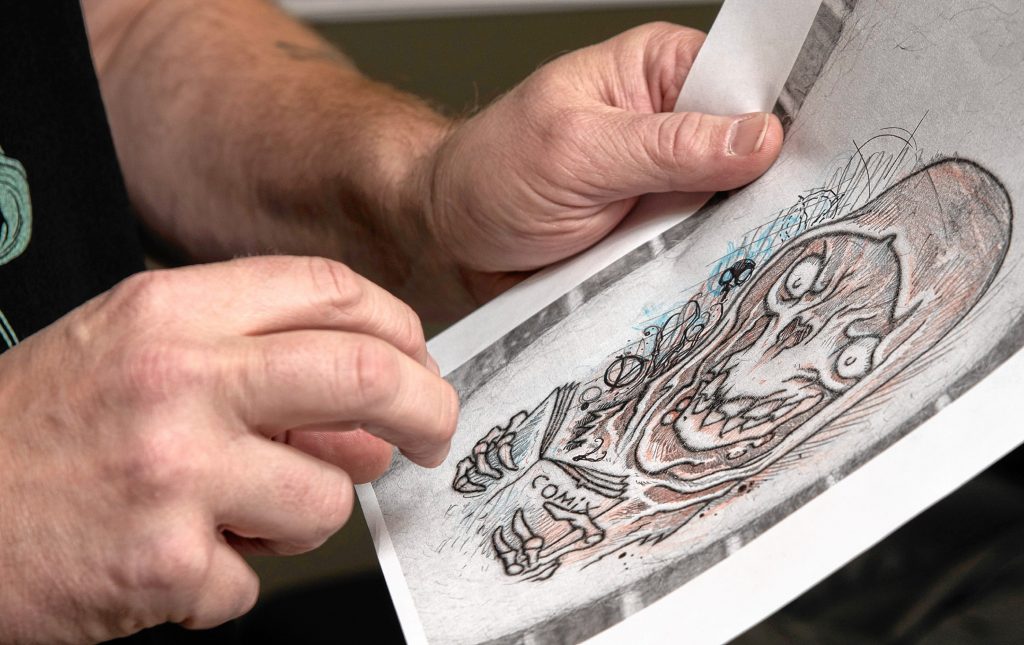 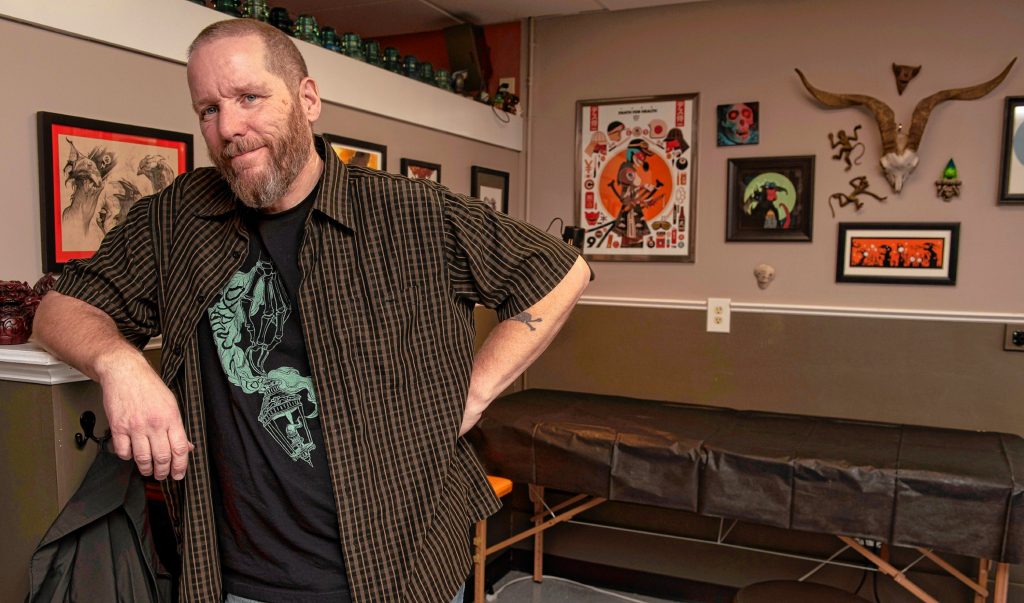 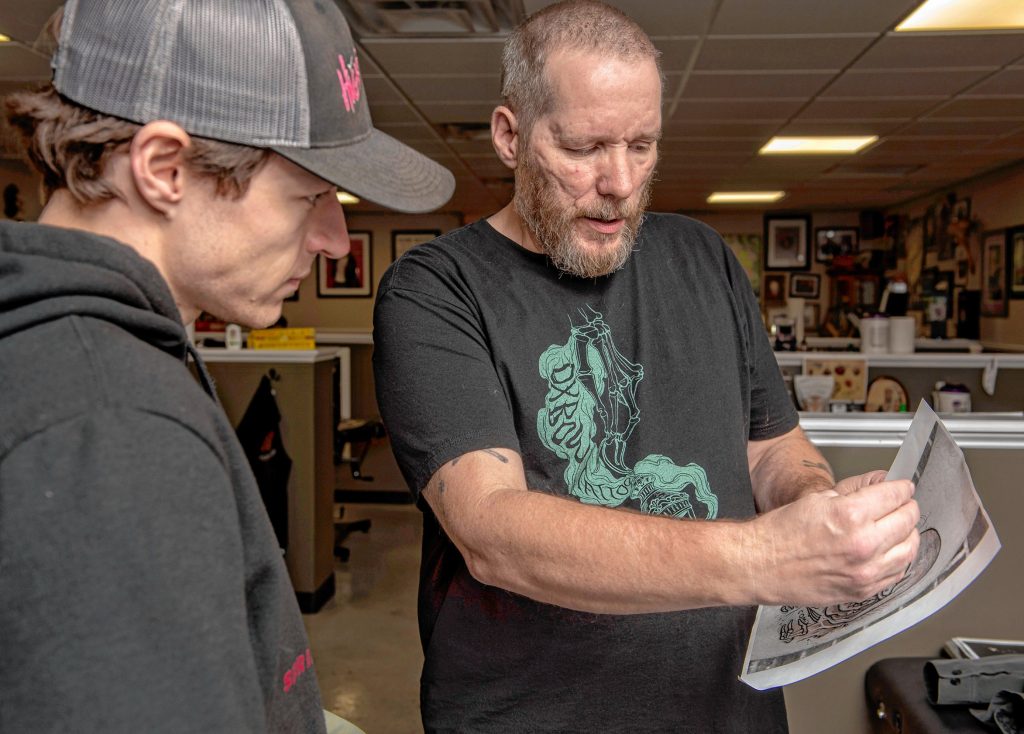 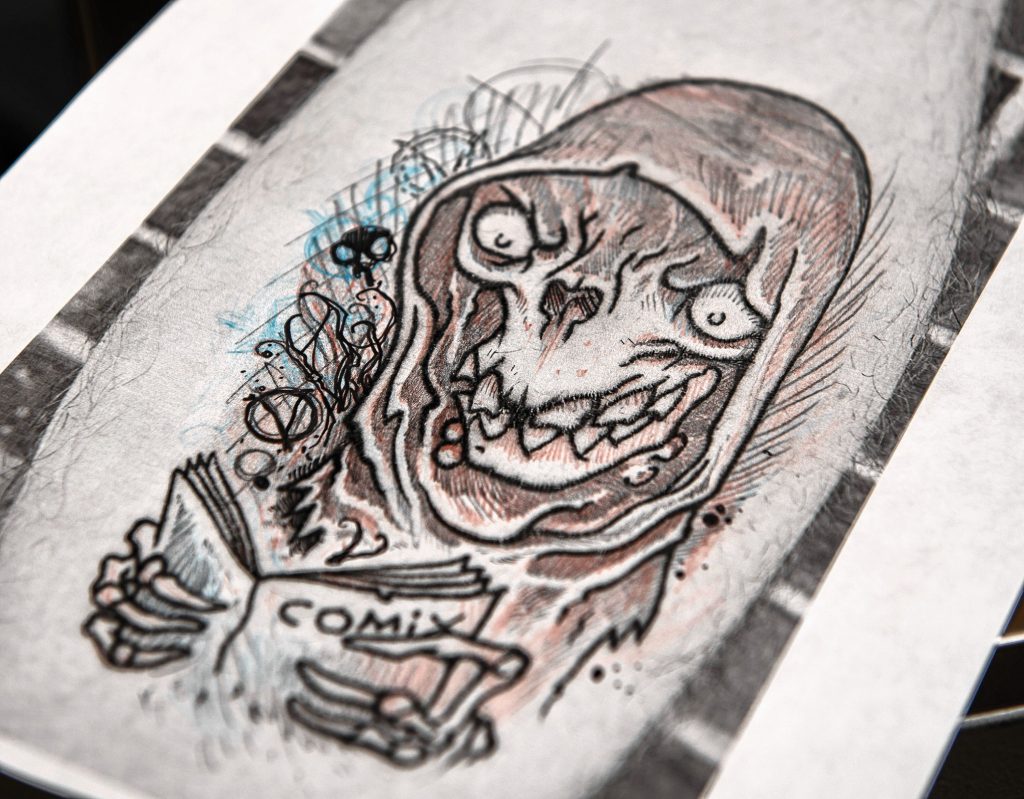 Artwork made by Eric Talbot which he is tattooing on Matt Miller. 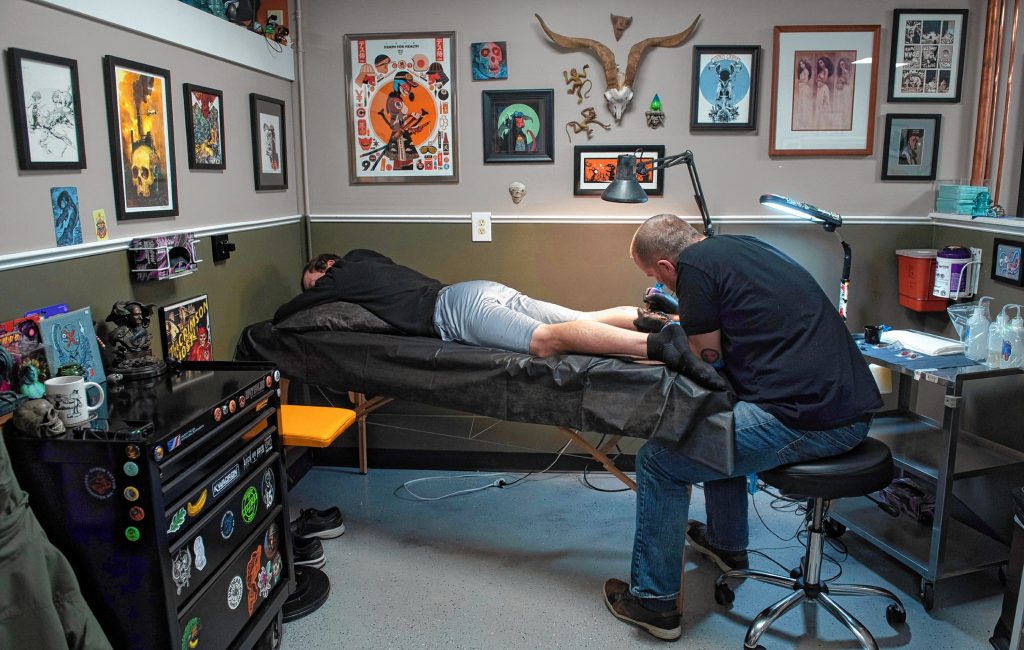 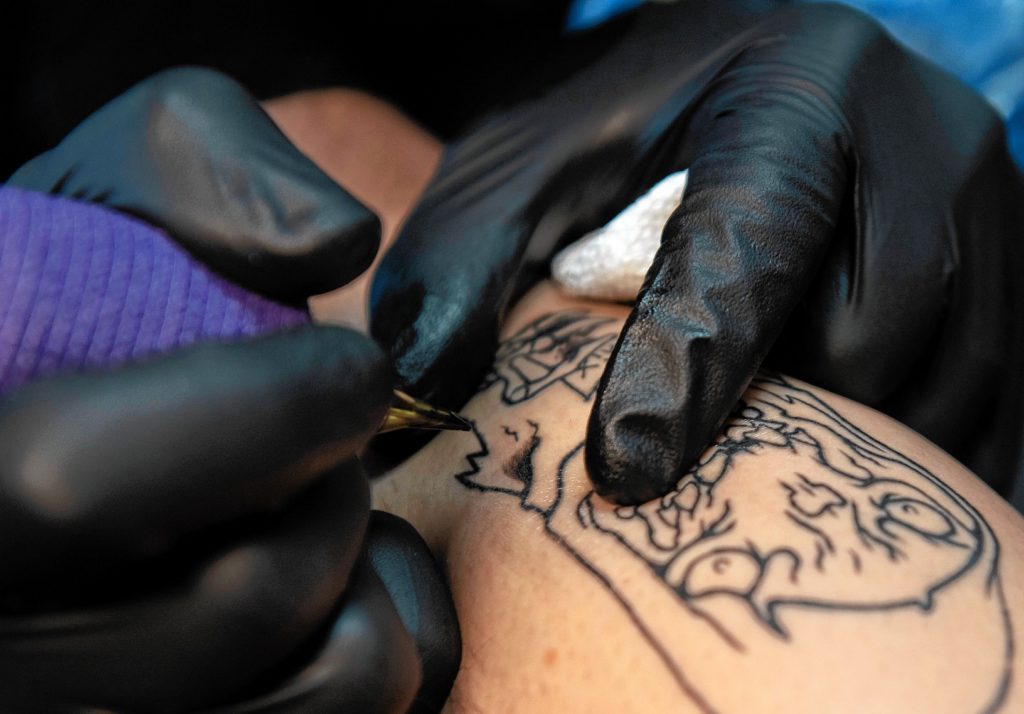 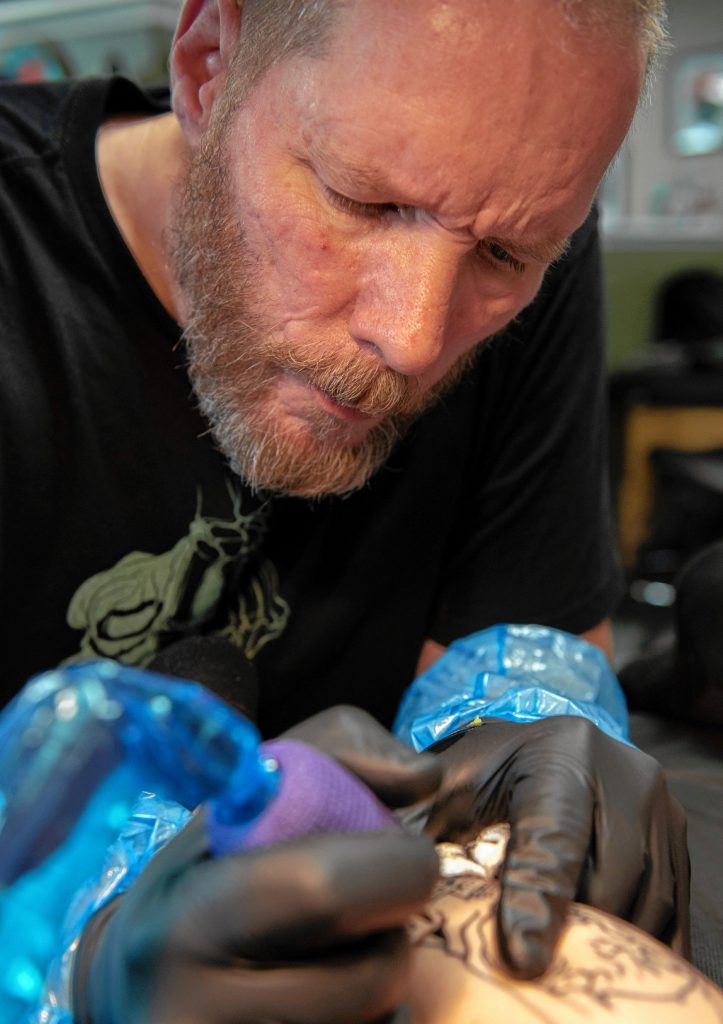 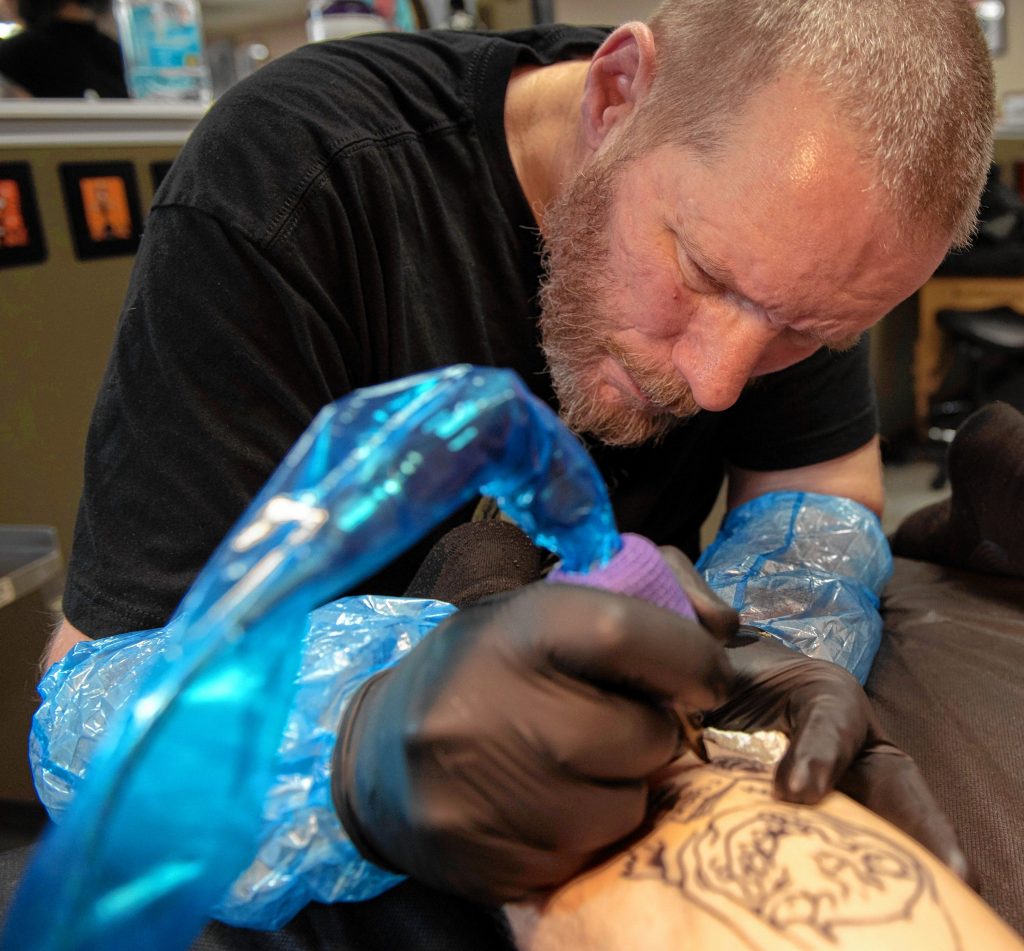 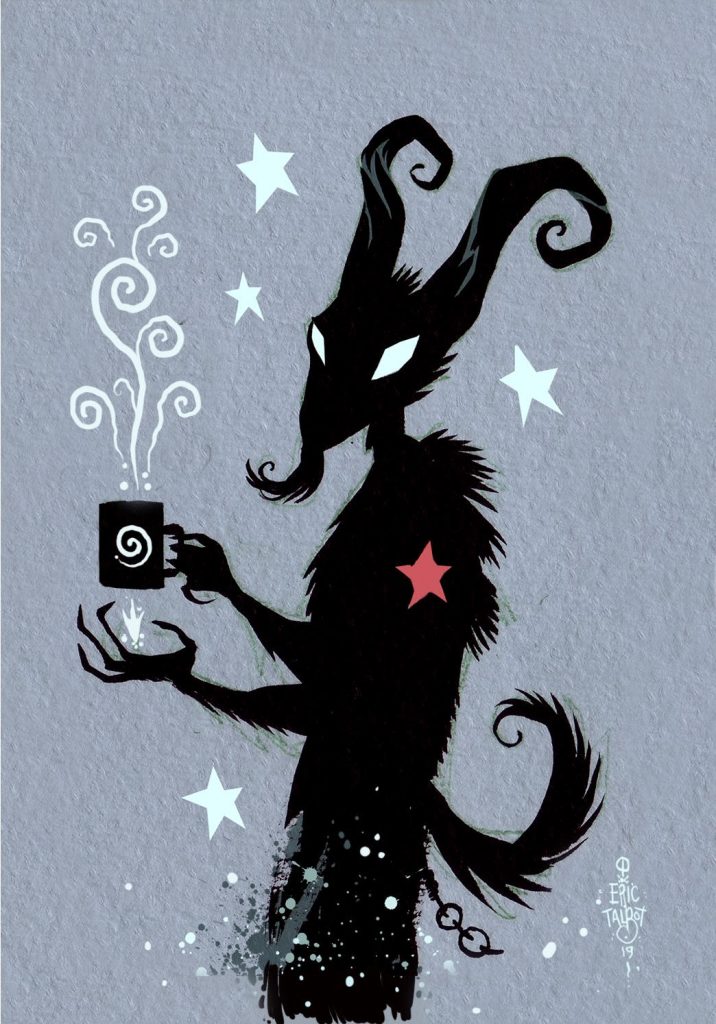 Eric Talbot got his first tattoo at around 19 years old living in Portland, Maine, during the early 1980s. When the veteran tattoo artist who inked Talbot’s first tattoo — a skull and crossbones on his left forearm — saw Talbot’s artwork, he was impressed and told then-teenage Talbot he could become a tattoo artist. Talbot recalled him saying, “Hey kid, you wanna learn how to tattoo?” 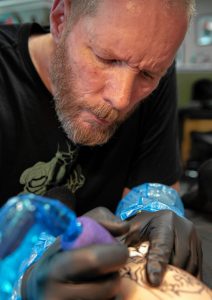 Years later, Talbot, who is now in his 50s and lives in Easthampton, would go on to achieve fame for a different set of art and inking skills as a comic book writer and artist for Teenage Mutant Ninja Turtles (TMNT), a series created by Kevin Eastman and Peter Laird that Talbot worked on for decades. Talbot’s first work with TMNT began in September 1987 with an anthology comic book of stories titled Turtle Soup.

When Talbot went to purchase a vehicle that same year, he discovered TMNT was catching on in the pop culture zeitgeist. The dealer he was working with finished his sentence when he explained that he worked on Teenage Mutant Ninja Turtles. Prior to that, he’d tell people about the comic series and they’d be perplexed.

“Turtles paid for my house,” he explained. “Turtles made my life. It was very cool chapter in my life. It still affords me a lot of things. It’s like being in an old rock band that people know. It opens doors.” 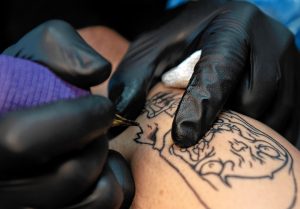 Sitting in the back office of Oxbow Tattoo in Easthampton, Talbot said that his interest in tattoos has now come full circle. He now works as a tattoo artist at Oxbow having completed an apprenticeship that began in March 2018 and ended in October of that same year.

Talbot explained that Teenage Mutant Ninja Turtles was sold to Viacom a decade ago in 2009. After spending almost 30 years working on the series, he decided to focus on his own artwork, but several years ago decided that entering a new industry — tattooing — offered him a chance to reconnect with his youth and the challenge he craved in his artistic work.

“It definitely helped me in the process of switching over to tattooing,” he said. “I only have my peers to go on. But apparently I have a steady hand. A lot of times when people start they don’t have a steady hand. I think it has a lot to do with the traditional tools that I grew up on. I use brush and ink and dip pens and ink. When I was working there was no digital art, but I’ve since steered away from digital art for the core artwork.” 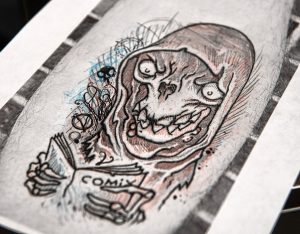 Artwork made by Eric Talbot which he is tattooing on Matt Miller. Carol Lollis photo

After the sale of the Ninja Turtles, Talbot said he focused more on his own artwork — ink creatures, sketches, and his skull and crossbones. After a while, his own artwork’s fandom eclipsed the work he’d done with the long running comic series. But he still wanted to try something new, which is when he was invited to train to become a tattoo artist.

Entering the tattoo industry more than a year and a half ago involved a steep learning curve for Talbot.

“When I got this opportunity, I think what appealed to me was the fact that it was different from what I’d been doing for all these years,” he said. “I kind of fell into a routine I guess. Seeing what these guys can do with a tattoo machine and what they can do on skin, it’s so interesting to me and such a challenge. Your canvas is no longer on the table. It’s a moving person.” 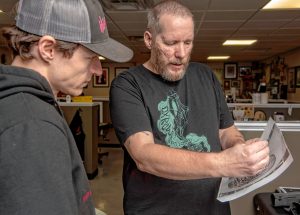 He added some of the challenges of tattooing include the personal nature of working on a client’s tattoo and communicating effectively with them as well as the medium itself requires absolute cleanliness.

“You’re dealing with blood and open skin,” he noted. “That aspect of it is a whole new world for me. But then, the machine, the needle arrays, it’s never-ending learning. Every single day is going to throw something new at you. The client might have skin that doesn’t take the ink as well as the next client. There’s also the shape of the client. If a person is in really good shape and they’re younger, the skin is easier to work with. There’s so many different factors involved with this. It’s just so different and new. I feel like I’m a new artist again starting over and I am.” 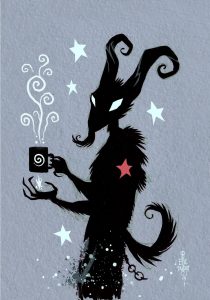 Talbot’s art style has been described as “do-it-yourself.” He explained that he didn’t attend any formal art schools and much of his approach to cartooning art was by learning through his own practice.

“I think that my style kind of reflects that … There’s a lot of experimentation to see what works for me. I think I do have a style. People have confirmed that with me that, ‘Your style stands out.’ They started saying that with the Turtles, too. With my style of Turtles people really responded to it and appreciated it visually.”

He added the often keeps in the pencil lines in final versions of his art, which in a way showcases his process.

“You can see a lot of work in my art and I think I prefer that look too,” Talbot said. “The pieces that I enjoy are the pieces where you can see the sketches underneath and I paint on top of the pencils and I don’t erase the pencil.”

Learning how to tattoo 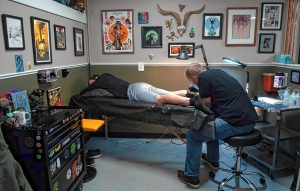 Tyler Chaney, 32, has been working as a tattoo artist for more than a decade, getting his start at various tattoo parlors in California before moving to Easthampton. He didn’t think he’d ever take on an apprentice tattoo artist, let alone someone two decades older than him. But he was surprised to find that when he took on Talbot as an apprentice that he was a quick learner.

“For the most part, it was relatively easy training him,” Chaney noted. “He came in with a goal to become a legit solid tattooer who was fundamentally sound. He had that goal going for him. Basically it was me teaching him about the machine — needle depths, full saturating inks, and stuff like that, and just making sure he had a good fundamental base.” 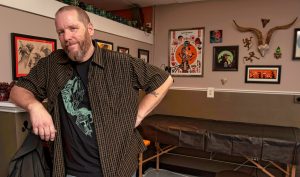 He added that it’s unheard of in the industry for people to become tattoo artists in the middle of their life. Most people get their start in their 20s or 30s. At Oxbow Tattoo, most of the artists range from their 30s to early 40s.

“What Eric brings to the table with his art and just being a cool dude, that’s the only reason why I accepted him as an apprentice,” Chaney said. “I think he can bring something really good to the tattoo industry as opposed to anyone off the street who has some cool drawings in a book. He’s a very accomplished artist who’s world renowned for his background.”

It was also a surreal experience teaching Talbot for Chaney having grown up with the Teenage Mutant Ninja Turtles and his comic artwork.

Talbot said he respects all of the tattoo artists at Oxbow Tattoo for how many years they’ve put into honing their craft.

“These guys are pretty damn incredible artists and seeing what they can do with a tattoo machine is very humbling,” Talbot added.

Since he completed his apprenticeship with Chaney in October 2018, Talbot has gained some positive feedback from clients about his work.

“It’s been good,” Talbot noted. “I’ve been lucky. I’ve had good heals. Learning to tattoo is a very difficult process. There’s a lot of things that can go wrong. Knock on wood, I’ve been very lucky to not have some of those things go wrong. My clients have told me I have a soft hand and I think that plays into what I’ve done over the years with brushes and pens.”

Getting a tattoo apprenticeship is a challenge in and of itself.

“You have to prove yourself and prove that you have respect for the industry,” he added. “The respect that they had for me and the years that I put in [comics] helped me get the apprenticeship I think.”

He said the only thing he regrets about his decision to enter the tattoo industry is not starting sooner.

“I see what I might be able to do with tattooing and I’m not sure if I’ll get there,” Talbot said. “I guess it’s how much hard work I put into it.”