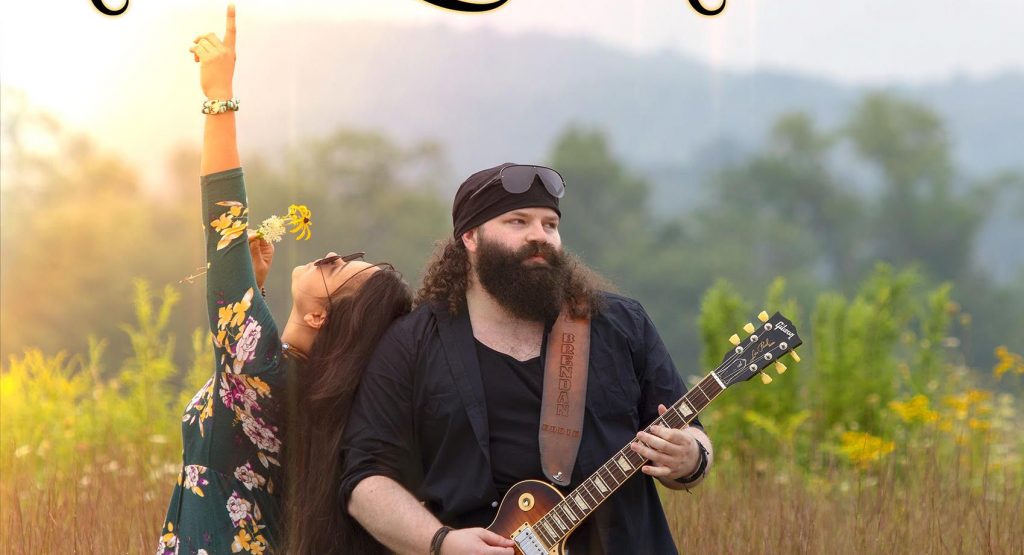 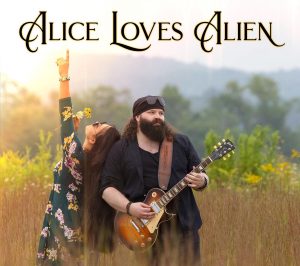 Life and music partners Gina Andia and Brendan Clark aren’t new to the Valley music scene, but their latest project Alice Loves Alien is fresh to our ears. I don’t mean to judge a book (or album) by its cover but when I received an early copy of the self titled debut album, I thought that it may be a folk album. The couple are in a beautiful field with wildflowers in the distance; they look whimsical in the sunset. When I put the CD in my car stereo, the first few seconds of opening track “Pale Horse” revealed me to be surprisingly mistaken. My eyes grew wide with excitement and I was like, “all right, this album has some force behind it.”

The screaming guitar and powerhouse vocals are reminiscent of ‘80s metal with a mix of ‘70s rock and roll. Andia’s voice rings close to Ann Wilson of Heart and Stevie Nicks. Clark’s guitar skills are intense and his vocals are strong and hearty. They appeal to a multi-genred audience with their wide range of musical mountains throughout the whole album.

The lyrics attached are poetic, and relatable. The track “House of Cards” is one of the songs that stood out the most to me. “Pull me closer as our hearts are beating / Like a clock that’s running out of time.. / Rituals we do to slow the bleeding / I’d give anything to keep you mine…”

Valley Show Girl: Can you guys tell the readers about both of your musical backgrounds?

Brendan Clark: I have been playing music my whole life — guitar, piano, bass, drums, vocals. I am primarily self-taught on every instrument with a few mentors along the way but mainly I learned by watching, listening and intuition. I started performing on guitar and incorporating into various bands in my teens but my passion was composing and producing my own music, which I started to do as a child. I always had a vision of what I wanted to do. With the experience I have accumulated along the way I feel more confident in the endeavors I am setting out upon. This album is the culmination of that wisdom, experience and knowledge, combined with tremendous effort.

Gina Andia: I have been singing and writing since I was 5. At that point my world was composing on my first keyboard and listening to mom’s vinyl records. I competed in many vocal contests and talent shows and consistently placed in the top. I love the challenge of raw talent against raw talent so I learned fast that there’s no fooling the ear, you either have it or people wince (laughs). I learned how to play acoustic to back up my vocals when I was 15 by listening and watching, and I wrote every day keeping journals of poetry and songs that I still have. Some of those lyrics are on our album.

VSG: Any specific song on the album you want to go into detail about?

Andia and Clark: “Dare to Dream.” It’s what this album is all about. When you dream something, you have to struggle uphill constantly to believe in it and make it come to fruition and that is the heart and soul of what this collection of music is. It has the best of all worlds of what our music is about. The rest of the songs are about life, experiences, strange situations that only a song could describe in the process of working towards your dream to make it real. Dreaming isn’t always pretty and our music speaks about all sides of life, not just the ones people are comfortable with in the light but the things that aren’t spoken of in the dark. One cannot be appreciated without the other bringing it value, and “Dare to Dream” outlines both sides of that coin acting as an overture to the entirety of the album.

VSG: It’s just the two of you playing all the instruments on the album?

Andia: Actually, I cannot understate the mind work of Brendan on this. He wrote the songs like a mad genius hearing literally every harmony note and every bass line somehow in advance. The whole album was in his head, complete and in detail. There was no way anybody could have known. He played the bass himself. He arranged literally every hit of drums and we got our friend Pariah to perform what he arranged. Brendan is recognized locally as a virtuoso on guitar but believe me, that is the least of his abilities and talents in music, and after listening to this album, others will know as well. He arranged the percussion, tambourine, egg shaker, etc. He wrote everything on the piano and performed it. He even arranged the vocal harmonies with such precision that they made no sense to me as I sang them in the studio but lo and behold when played in sequence they were intricate masterpieces of production. Brendan and I both sang the lead vocals and harmonies and I played acoustic guitar on a few tracks, especially the ones I wrote but I can’t understate the amount of work Brendan did in producing the overall sound of all the songs. That was all him. He has an otherworldly ear.. something about the way his mind works probably akin to all those legends we hear about Brian Wilson and Beethoven combined.

Clark: Gina and I had a band called “Crazy Alice’s Travelling Show” which did covers and originals, and we played throughout the local scene. We were songwriters and we wanted to go in the direction of doing originals and to see where it could take us. I have the nickname the alien which is almost like a tongue-in-cheek kind of thing, I’m not sure what it means but I can guess. We took one of Gina’s alter ego’s with the name Alice which hints to the mystic nature of our music and as simple as that we melded the two and pursued our dreams together.

Alice Loves Alien will have their album release show this Thursday, December 12, at One Club, 60 North Westfield St. in Agawam at 7 p.m. Pariah who played drums on the album will be playing with the duo along with John O’Boyle on bass. The album will also be up on all major streaming services @alicelovesalien.