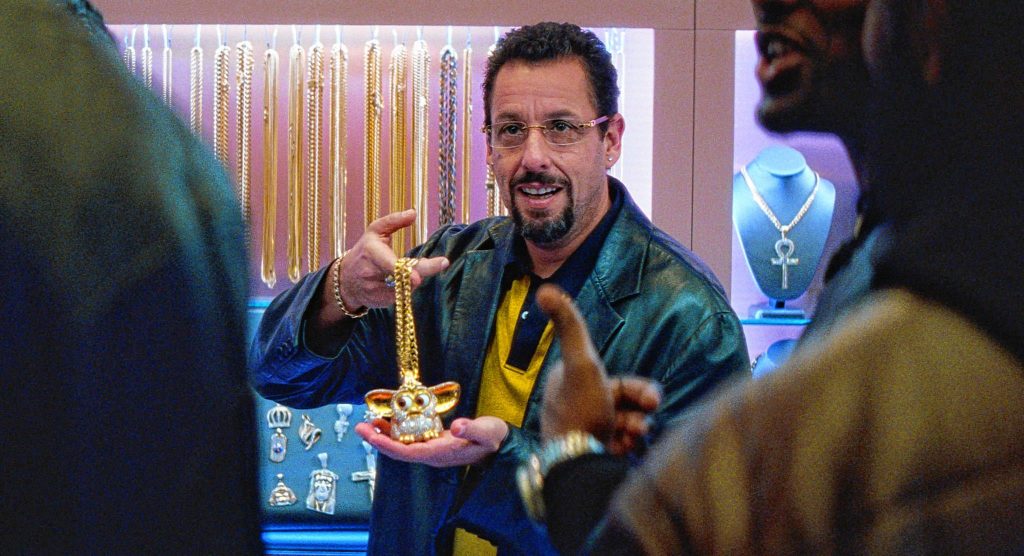 Back in the Blockbuster era of movie consumption it was hard not to think of movies in terms of genre first: walk into one of those big box shrines to moviemaking and you couldn’t take a step without first charting a course by the signs hanging from the ceiling. COMEDY was that way, DRAMA the other, ADULT behind the beaded curtain. The occasional place would simply put it all together from A to Z in a democratic if jumbled mass.

We’ve long been the same way with our actors. We like our comedians funny, and our dramatic leads stoic or a wreck but without too much in between. I’m over-simplifying, of course, but the point is that we still seem surprised when a “comic actor” is featured in a “serious role.” This week, one such actor makes a move that has taken many by surprise.

The actor is Adam Sandler, perhaps best known still for his early post-Saturday Night Live movies like Happy Gilmore — or maybe it’s not the movie itself we remember, but the general college-freshman lewdness of his act at the time. It feels odd that the image has stuck for so long, when you consider his later work; since 2002’s Punch Drunk Love, in which Paul Thomas Anderson cast him as a lonely businessman with anger issues, Sandler has regularly found critical acclaim in more dramatic roles. His latest seems poised to finally bring him more mainstream notice: the movie is Uncut Gems, from brothers Josh and Benny Safdie, co-directors who share writing credit with their regular collaborator Ronald Bronstein.

Sandler plays Howard Ratner, a jewelry store owner whose clientele trends toward the celebrity (more on that in a moment). The Safdies have based the feel of the story if not its details on their father’s experience working in Manhattan’s Diamond District; Ratner’s small store is located there. But the store is not the center of the film; that moving target is Ratner himself, and the Safdie’s hyperkinetic movie jumps and bumps along to Howard’s restless rhythm.

It turns out that the rock that catches Ratner’s attention isn’t a diamond but an opal, an enormous black opal that a couple of Ethiopian miners pull out of the earth early in the film. For Ratner, who owes a great deal of money to not so great people, the opal looks like a way out of debt, at least temporarily — his gambling habit almost guarantees he’ll need another opal or two down the line. One potential buyer is Kevin Garnett, the pro basketball star who plays himself here. Garnett retired in 2016, but Uncut Gems is set in 2012, when Garnett was playing for the Boston Celtics; a fair deal of the action and Ratner’s ensuing ups and downs revolve around a pair of Garnett’s games.

While Sandler certainly deserves a lot of the credit for his performance (at a glance he is reminiscent of the younger, New Yorkier, Pacino), the work of cinematographer Darius Khondji also does the Safdies a great service. Best known for his work with David Fincher (Se7en, Panic Room) and Woody Allen (Midnight in Paris), Khondji’s eye here makes the city seem fresh and ripe, and drives home the family-man side of Ratner during an extended Seder the provides a bit of a rest in the middle of the movie.

Maybe we will never really leave behind the idea that our actors should be specialists. We don’t often look to a classical violinist to sit in with a jazz trio, or to portrait painters for Sunday comics. But maybe, even if only once in a while, we should.