Monte Belmonte Wines: Michael Quinlan — One Region at a Time 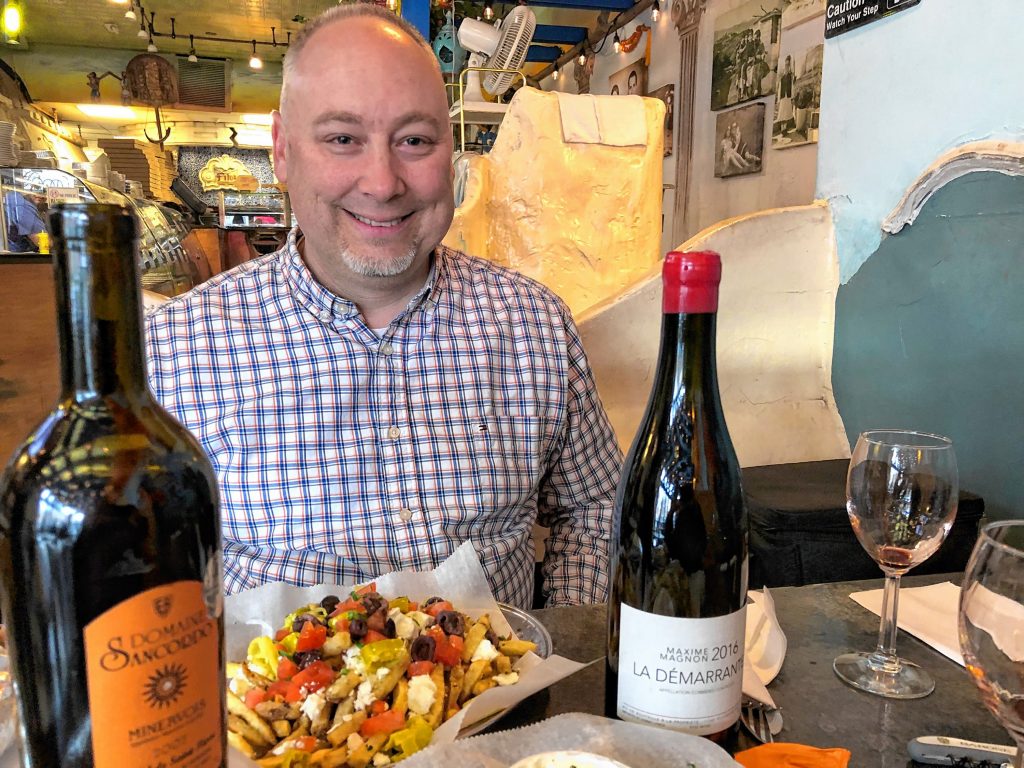 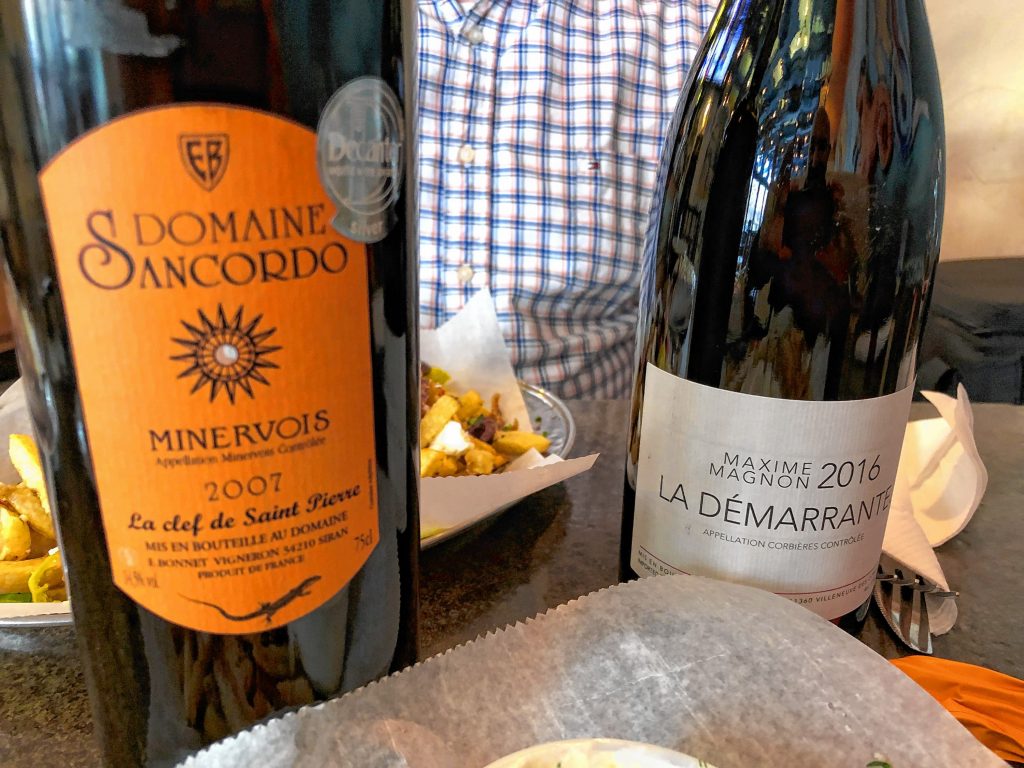 Northampton’s soon-to-be-sworn in Ward 1 Councilor also happens to be one of the biggest players in wine in Massachusetts, and I meet with him for lunch over wine at Northampton’s Filo’s Greek Taverna. It’s BYOB. He doesn’t let me pay. Ethics-schmethics. Michael Quinlan is the “Manager of Fine Wine” for Big Y’s wine juggernaut-Table & Vine. Ask any wine salesperson in the area and they will tell you that their wine sales live and die by what Table & Vine thinks of their wines. And their leading tastemaker is about to be one of the many new faces on Northampton’s City Council. But he’s hardly a new face in Northampton.

“I’m a Townie. We moved here in 1976 all the way from Easthampton. My wife Kim is also a Northampton High graduate. She’s the 4th generation of her family to go to Northampton High.”

And while he spends most of his work life at Table & Vine’s mothership in West Springfield, his wine journey began on State Street in Northampton.

“I was looking for a part-time job and walked into State Street when Judy O’Brien, God bless her, took me in…” I have written about the late Judy O’Brien before. As the wine buyer for State Street Fruit Store Deli Wines & Spirits and Cooper’s Corner, she also started me on my wine journey. I refer to her as my Wine Mother. “She was always so good to me,” Quinlan says, “even after I left to work for a competitor.” The Wine Mother was not afraid to tell you how she really felt about people. I never heard her say a bad word about Michael Quinlan, despite his rise to wine power at the 800-pound gorilla of Table & Vine. It seemed fitting that the wine I brought to our lunch was a 2007 Domaine Sancordo Minervois that The Wine Mother had purchased for the store just around the corner from Filo’s. Quinlan brought a 2016 Maxime Magnon La Demarrante Corbières. We have a French Languedoc-region lunch theme.

After he caught the wine bug, Quinlan left his part-time job at State Street and Cooper’s in 1996 for a job at what was then called Big Y Wines. “I found it really rewarding to learn about wine,” Quinlan says. “When I went full time, the wine director there said ‘Pick one wine area and learn about it. One area at a time. I decided I was going to learn about Spain. All the wine fit in one row. The most expensive wine was not out of the realm of possibility for me to afford for a birthday or an anniversary or something. And within 12 months, I had tried every wine in the Spanish section.” This is an excellent way to study wine. It’s why our Greek lunch has a French wine region theme. And French wines are one of Table and Vine’s specialties.

“When I started at the store they were so committed to European wines, almost to the detriment of American wines. At the time they were bringing in their own Bordeaux, now we’re bringing in wines from all over the world. But to this day I still believe if you look at our Bordeaux selection specifically, we have the best Bordeaux section in New England. And that means providing wines from our least expensive wine at about $8 to as much as you want to spend in Bordeaux, which you can. You can spend an outrageous amount of money.” Our wines were from Languedoc, still a relatively affordable area. Both of them cost around $30.

“I hope you two are calling an Uber,” says Northampton’s Mayor David Narkewicz as he walks by our table, declining to join our decadent lunch. We’re both walking. And walking is one of Quinlan’s first priorities when he’s sworn in. “In Ward 1 specifically, there is a need for traffic safety,” Quinlan says, “On Hatfield Street, there’s no sidewalk. There’s no crosswalk.

Despite his refusal to day-drink with us in public, the Boy-Scout level squeaky clean Narkewicz was the impetus for getting Quinlan interested in politics. “I was appointed by Mayor Narkewicz to the Whiting Street Fund Committee, which makes recommendations to spend money left from a grant to the City of Northampton by a gentleman named Whiting Street.” And here I was thinking Whiting Street was another road that needed a sidewalk. “He left the city a certain amount of money in the 1860s which in his words is to be used for ‘the worthy poor,’” Quinlan says, “When I vetted for that by (outgoing councilor) Ryan O’Donnell, he said to me ‘maybe someday politics will be for you. And this isn’t a bad way to see how a municipality works. When I saw Maureen Carney was stepping down, I asked her about it and I thought this could be an interesting time to get involved.”

While it can often feel like carpetbaggers (like me) get the notoriety for getting involved in their new communities, I think it’s interesting that Quinlan is a townie who has stepped up — albeit a townie with a worldly (or at least wine-worldly) perspective. “The people that come here from other places see how special this place is and want to get involved,” Quinlan says. “I think a lot of us who have been here a long time often take it for granted.” Michael Quinlan is not the first Table & Vine wine connoisseur to jump into politics. Quinlan laughs, “Ha! That’s true.” One of Table & Vine’s founders, Gordon Alexander, was a Holyoke Councilor. “It’s something that I’ve aspired to in secret for a long time,” Quinlan says,” But because of my work, working a lot of nights and weekends, I haven’t had a lot of time to join too many things. But my kids are older now. They’re out of the house. They’re both in college. And you look at that extra time and think ‘what would you do with free time if you had it?’ Engaging with the community was something that really spoke to me.”

I ask him, “You are about to die and you can drink any wine on your deathbed. What is it?”

“Trimbach Cuvée Frédéric Emile Riesling. It’s something I fell in love with over the years. I had a chance to visit the Trimbachs one time. The wine is unbelievable. It’s a spectacular dry white wine, especially with age. It evolves into a wine that gives you incredible pleasure and texture. Jean Trimbach uses the term ‘white truffle.’ He talks about the earthiness of this wine. It’s not the kind of thing you think of. With earthy flavors, you think of a red wine. But this is a different cat, you know.”

My rejoinder, “Is Riesling the greatest grape?”

“Yes.” He answers, without hesitation.

“I guess I’m not asking the grapes for their votes. So, it’s probably Columbard or something over produced and is the filler for sweet sticky wines.”

And just like he won’t take my offer to buy him lunch, he wouldn’t take my offer that maybe the worst grape is Pinot Grigio. It’s too soon to tell, but maybe Michael Quinlan is incorruptible. Although, the Mayor of Northampton, who declined to drink with us in public, may have a different perspective on the both of us.