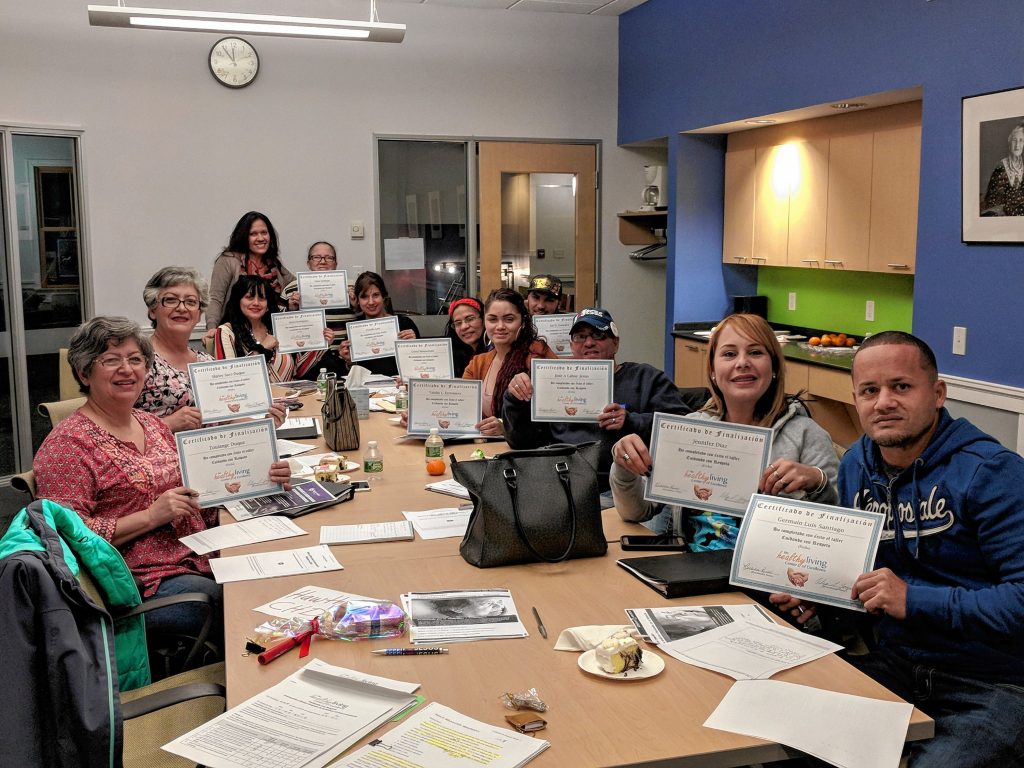 Members of the Spanish-speaking group Cuidadores Unidos meet once a month to discuss the challenges of being caregivers to family members or friends with a dementia-related disease.

At the Holyoke Senior Center, members of Cuidadores Unidos are able to share their experiences of providing care to family or friends that are experiencing memory loss and beginning to behave differently as a consequence of their disease.

It is also a place that ensures the 25 members, many of whom only speak Spanish, do not face the challenges alone. 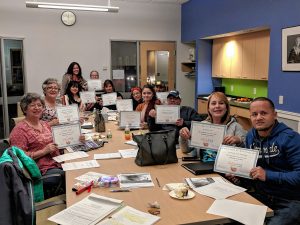 “They are able to share their experiences, what works and what didn’t work, the struggles with dealing with different stages,” said Olga Lydia Yanginski, who is a community options counselor for WestMass ElderCare and assists the group. “I feel like by the end of the training folks feel like they have a better understanding of the disease and how to cope. A lot of folks that attend become friends, which is great. And they support each other.”

Cuidadores Unidos has recently been awarded financial support to strengthen its program and provide more resources to its members.

The group was born out of a caregiver skill-building workshop, called Cuidando con Respeto, offered by WestMass ElderCare, a non-profit in Holyoke providing elder care to Chicopee, South Hadley, Granby, Belchertown, and other surrounding communities.

In 2016, the city of Holyoke launched an awareness-raising effort around dementia and those affected by the disease in collaboration with WestMass, the city’s Council on Aging, the Loomis Communities and the Alzheimer’s Association and created Dementia Friendly Holyoke as a result.

This past month, Tufts Health Plan Foundation granted the Dementia Friendly Holyoke collaboration a $10,000 grant to continue to fund Cuidadores Unidos. The grant will continue support for the meetings, provide educational and self-care opportunities for its caregiver participants, many of whom rely on the Spanish-language resources.

Providing resources and information on dementia for caregivers in Spanish is a major component that will be strengthened through the grant, according to Sarah Aasheim, director of community programs for WestMass ElderCare.

“We are focusing on the Spanish-speaking community in Holyoke that has been traditionally underserved,” Aasheim said. “There have been gaps in programming to serve this community across the spectrum. When we realized we’ve given birth to this support group, we immediately recognized that it’s not only an opportunity, but it’s our responsibility to strengthen and fortify the group to fill this gap. To reach more people in the underserved population.”

Stress-management is another focus of the Cuidadores Unidos.

Yanginski said that many caregivers often feel an overwhelming sense of responsibility in their roles, and the group serves to remind caregivers that delegating responsibilities is encouraged and that self-care is also important.

In instances when a dementia patient requires a facility to take care of them, it can be very difficult for caregivers, Yanginski said.

“It’s OK to let go of that responsibility if it comes to a point where a person needs long-term care in a facility,” she said. “Sometimes caregivers feel that guilt and it’s letting them know that it’s OK, they did all they could all these years and it’s not a failure on their part.”

The grant will go towards providing caregivers with stress-management activities. Yoga and meditation classes along with “spa days” are planned to give caregiver participants much-needed respite.

Aasheim said the self-care activities will “give them a meaningful and needed break from the demands of their daily caregiving responsibilities.”