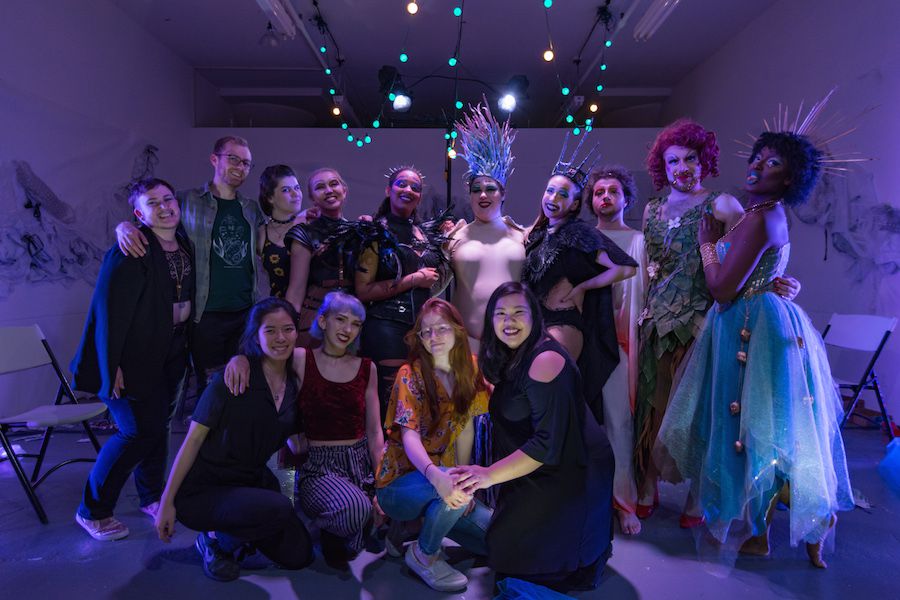 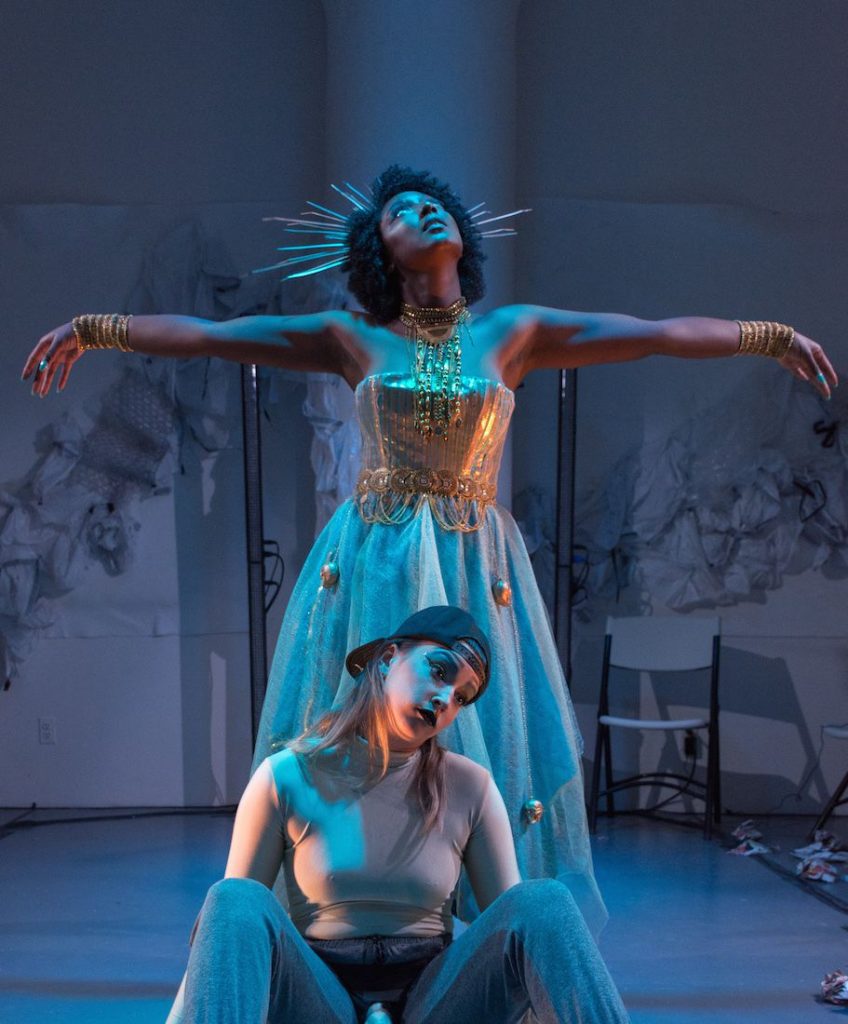 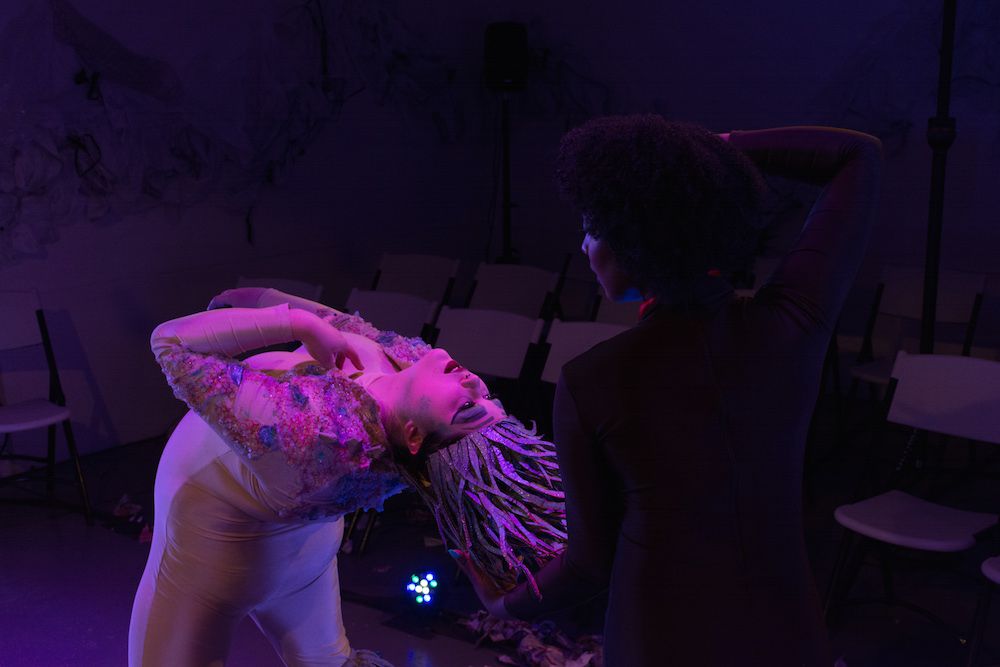 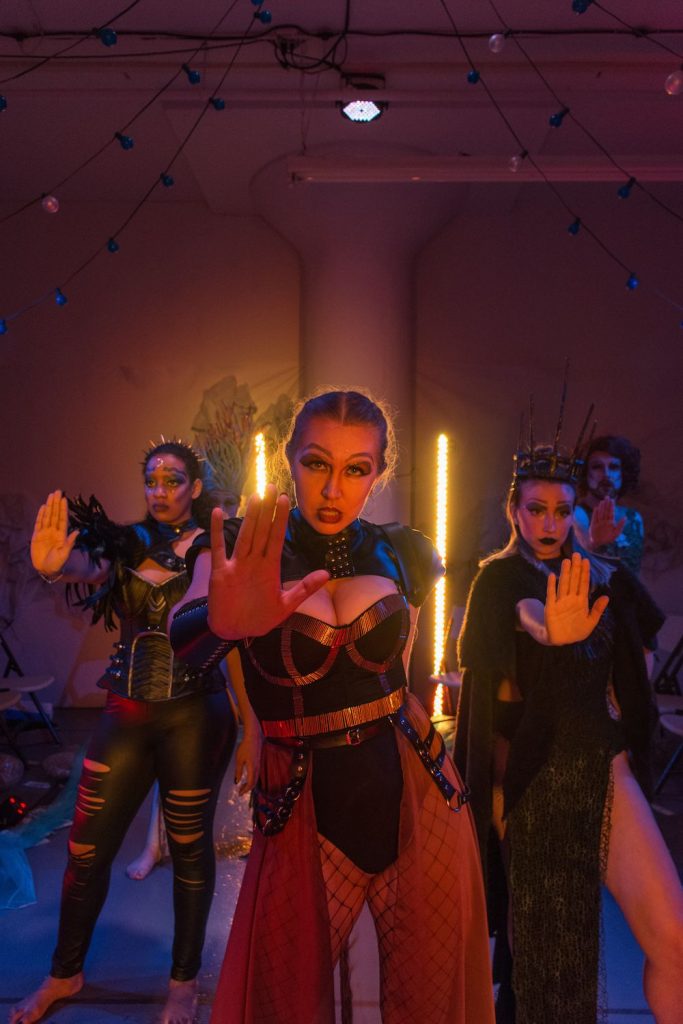 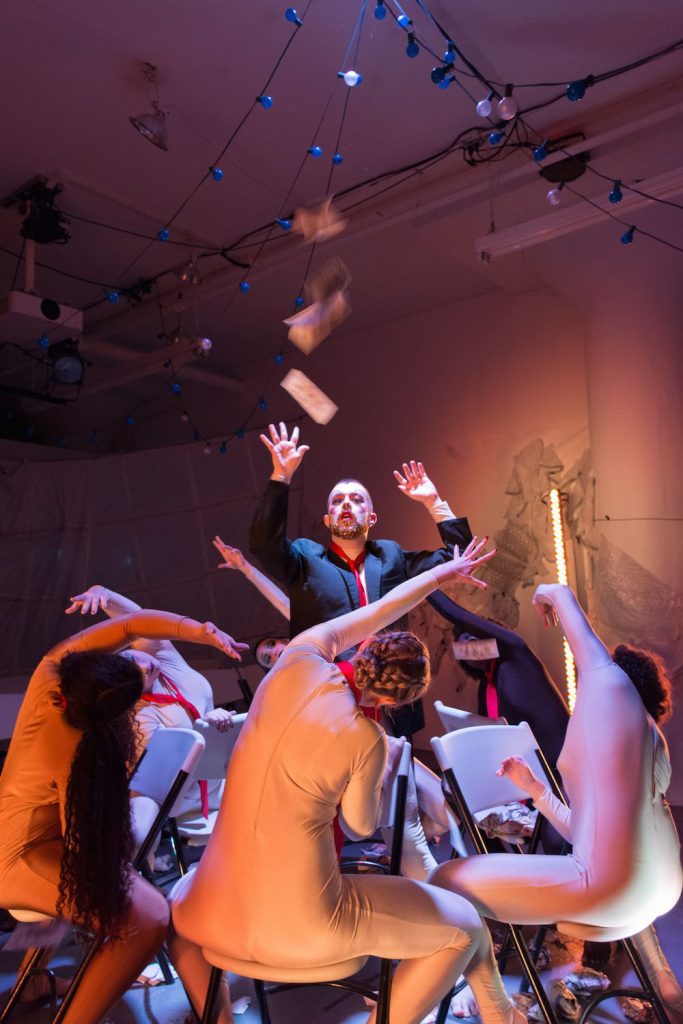 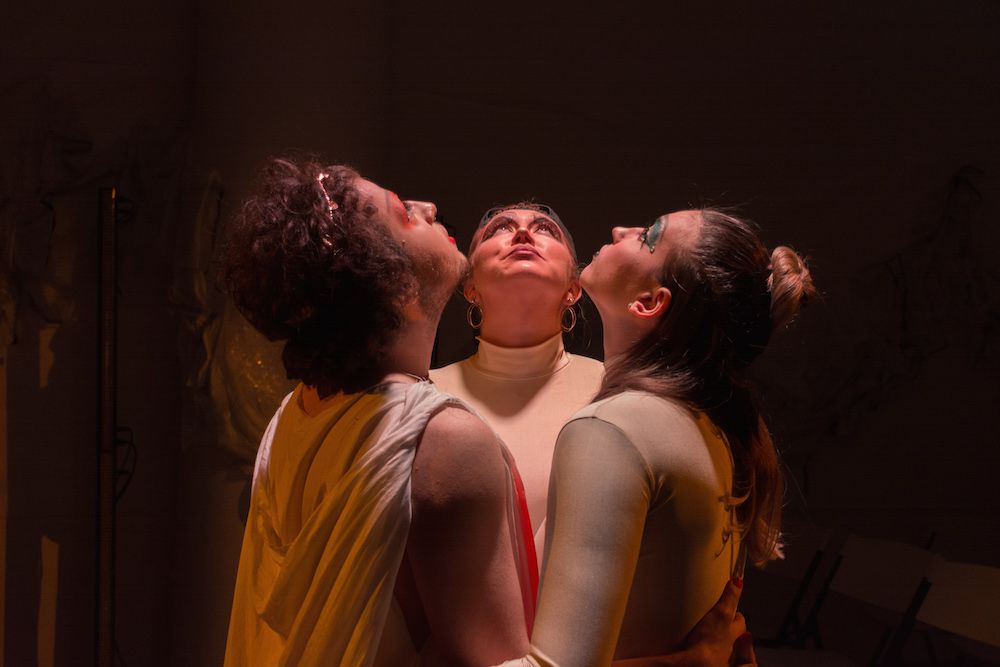 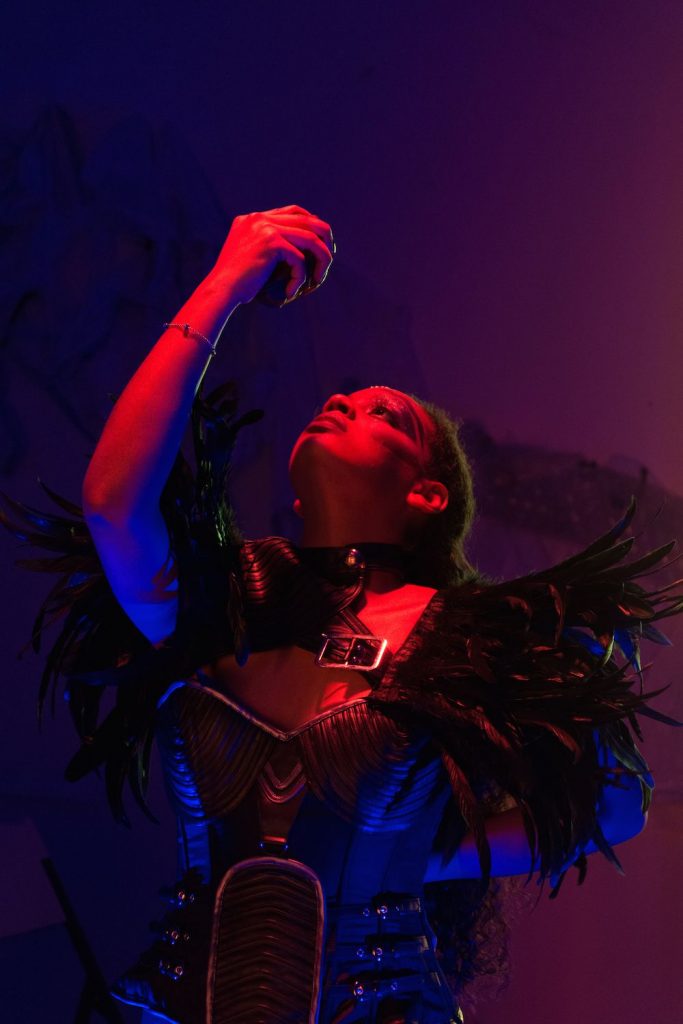 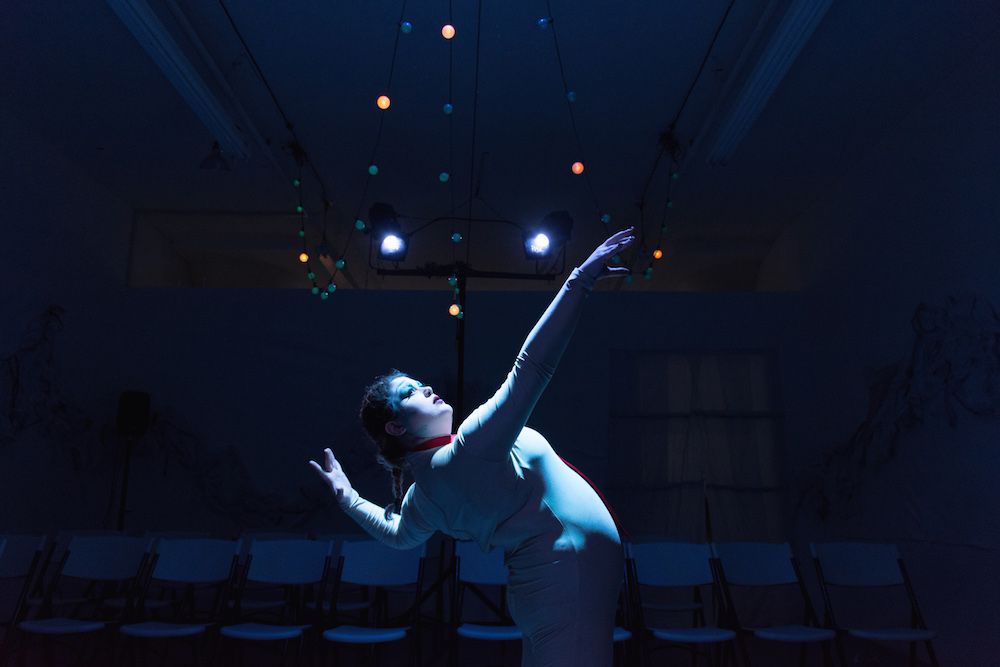 An Amherst theater company named Queer & Now will be combining drag performances, lip syncing to contemporary pop music, as well as dance, theater, and mythology from around the world this weekend at Hawks & Reed Performing Arts Center in Greenfield.

Queer & Now will be staging two performances of “Sync or Swim” on Friday and Saturday at 8 p.m., which feature a twist on ancient mythological tales with addition of contemporary themes such as rising sea levels, climate change, corporate greed, and patriarchy. 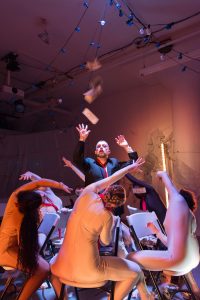 Garrett Sager, director and producer for Sync or Swim, said the show features mythological vignettes from around the world such as the Merrows and the Selkies from Ireland and Scotland, Mami Wata from West Africa, as well as the myths of Circe, Nemesis, Narcissus, Demeter, and Antigone, all from Ancient Greece.

“We were wondering if a reinvention of these ancient stories could point us toward the future — one where water is rising, our borders our shifting, our bodies are transforming … Sync or Swim has these seven different vignettes and throughout the show water rises represented through blue fabric, accumulating on the stage. Each person in the show, each myth, is a retelling of the myth placing these ancient stories in our contemporary climate,” he explained.

Each ensemble member with Queer & Now will be spearheading their own ancient myth vignette, Sager said, all of which include a transformation, which in turn leads to the faux water rising onstage.

“And at the end, all seven of these mythological deities have to come together and embrace this new world where borders look totally different, water is now accumulated, and provide a possible direction for the future,” he said.

Sager will be performing as Demeter, Greek goddess of the harvest, during the production. He explained that his story is a new take on the classic story of Demeter and her daughter Persephone, who is taken to the underworld every winter by Hades, the Greek god of the dead, and who returns to her mother every spring. 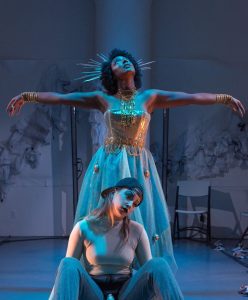 “There’s this porousness to the four seasons [with climate change] that I was like, maybe there’s something going on with Demeter and Persephone? Maybe there’s conflict.”

For Sager’s vignette, the story is re-imagined as Hades representing oil and fossil fuels with a cardboard logo of Shell oil company onstage to showcase the current evils of fossil fuel corporations, he explained.

“The only way that we’ll make real radical change is if we dismantle these really big corporations and fossil fuel companies that are destroying our climate,” Sager said.

Meanwhile, the vignette starts with a pop song, “Missing U,” by Swedish singer-songwriter Robyn, and also includes imagery of Demeter (played by Sager) covered in black; representing the oil his character is covered in while scouring the Earth to find Persephone.

Queer & Now was founded in 2017 by current and former students at the University of Massachusetts (UMass) Amherst, said Sager, who graduated in 2019 and now lives in Hudson, N.Y. The ensemble’s first production was “A Lip Sync Spectacular,” which was staged at UMass Amherst, and involved drag performances in combination with lip syncing.

Sager said whereas “A Lip Sync Spectacular” was about more focused on individual stories of transformation, “Sync or Swim” is more narrative driven and thematic. 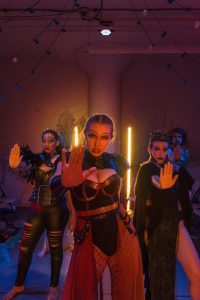 “We’re mostly interested in seeing how drag, lip sync, and dance can work for the performers wanting to tell the themes and aesthetic of the story,” he explained. “As we’ve gotten more in depth and grown, we’ve looked at how all these elements come together and be really story driven.”

The rest of the ensemble of Sync or Swim includes Faolin Bobersky (as Circe), Bry Belling (as the Merrow), Elisabeth Castellon Gonçalves (as Nemesis), Emma Hollows (as Antigone), Akira Rose (as Mami Wata), and Sebastian Salloum (as Narcissus), in addition to the creative team of dramaturgs, costume, makeup/ hair, and light designers, as well as production assistants, that consist of the entire cast and crew.