Bizarro Briefs: Robber in the Dark

Robber in the dark 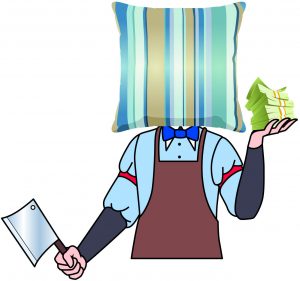 A man attempted to rob the Bank of Scotland last September armed with a meat cleaver and disguised by a pillowcase over his head — but he forgot to cut eye holes. The 47-year-old stormed into the bank and wielded the meat cleaver while wearing the pillowcase, but had to quickly take it off because he couldn’t see anything. The man still managed to take off with £2,000 before police caught up with him. The man has pleaded guilty to assault and robbery and will be sentenced next month in the High Court in Glasgow.

According to a new study published in the journal Frontiers in Zoology, dogs use the Earth’s magnetic field when they go to the bathroom. The study suggests that dogs also choose to do their business in a north-south axis and are sensitive to small variations in the planet’s magnetic field. The scientists for the study examined 70 dogs consisting of 37 breeds during a two year time. They recorded 1,893 defecations and 5,582 urinations.

A family in New Zealand were plagued by a serial burglar who only stole fish food, but when they set up a security camera the culprit was revealed to be the neighborhood cat. A friend was taking care of the family’s fish while they were out of town, when the fish-sitter (who knew that was a thing?) noticed the fish food was missing. When the family returned home, they were awakened in the middle of the night by a sound in the kitchen. But it wasn’t until they caught the white fluffy feline on camera, that they realized it was a cat burglar. The cat was able to squeeze its way through the cat door despite it being secured with a magnetic lock.

Life in a barrel

A man from South Africa has spent more than 67 days in a wine barrel mounted to the top of a pole while seeking a Guinness World Record. Vernon Kruger, who recently beat the record on Jan. 20, hopes to go on to smash that record by staying in the barrel for an additional full week. Kruger’s biggest safety concern is lightning. A bolt of lightning narrowly missed the pole a few days into his record attempt.

A theme park in Chongqing, China, opened their new bungee attraction by forcing a pig to jump off a 68-meter high tower. The stunt predictably set off a wave of criticism after video footage surfaced online of the pig tied to a pole and carried by two men to the top of the tower before being pushed off. This PR stunt took place in January in the south-western China city, and to add to the tackiness, the pig had a purple cape tied around its shoulders. Animal cruelty is not punishable by law in China, and PETA condemned the incident as “animal cruelty at its worst.” Local media outlets reported that the pig was sent to a slaughterhouse afterwards.

A Texas man and his family received “nasty” messages after the state’s Department of Motor Vehicles forced him to remove his licence plate, which read: “Jail 45” — a reference to Trump, the 45th president of the United States. The man, an Air Force veteran, said he got the plates in November as a peaceful form of protest, but the following month, the state determined it was derogatory. “To me, that’s my freedom of speech, my First Amendment rights,” the man told Dallas-Fort Worth’s WFAA. After he posted photos of the plate to social media, he and his family began receiving hateful messages.

Whatcha got in that bag?

An Alaska man who went to put a bag of garbage in a shed behind his home was trapped in the structure for awhile after a curious bull moose followed him and briefly tried to push its way into the shed, its large antlers brushing the door. Chris Phelps, who lives in South Anchorage, had just dropped the sack of trash in the shed and had come back out to lock the door when the moose appeared behind him, walking to the shed — all of the action caught on a security camera. Phelps ducked back inside the shed, closed the door and, according to the Associated Press, called his wife and then his teenage daughter on his cell phone to see if the moose was still there. Both ignored his calls at first; his wife later picked up, looked outside and told him the moose had gone. Phelps told the AP that moose are common in his neighborhood; one gave birth to a calf in their backyard a few years ago, and another ate a Christmas wreath the family had on their front porch. Moose are not normally aggressive but can deliver deadly kicks with their front legs, according to Alaska wildlife officials.

An elephant named Natta Kota, meaning “Short Tail,” has evidently become a semi-regular visitor to a hotel on the southeast coast of Sri Lanka. The elephant, which lives in the vicinity of the Jetwing Yala Hotel, has been filmed three times wandering the halls of the building, located in an area of dune scrubland where many animals live. The hotel grounds are not fenced off, as the owners say they know their guests enjoy watching the wildlife. But they’ve also warned guests to keep their distance and not attempt to feed or interact with the critters, including Natta Kota: The elephant “may be a regular visitor” to the hotel, the owners say, but he “is still very much a wild elephant and we at Jetwing would have him remain as such.” Videos posted on the internet of Natta Kota walking the hotel corridors have instead inspired comments on social media such as “Let’s talk about the elephant in the room” and “Waiting for the bellboy to step in and ask if he would like some help with his trunk.”