Groundskeeper’s ‘Ghost Things’ combs the depths of the psyche 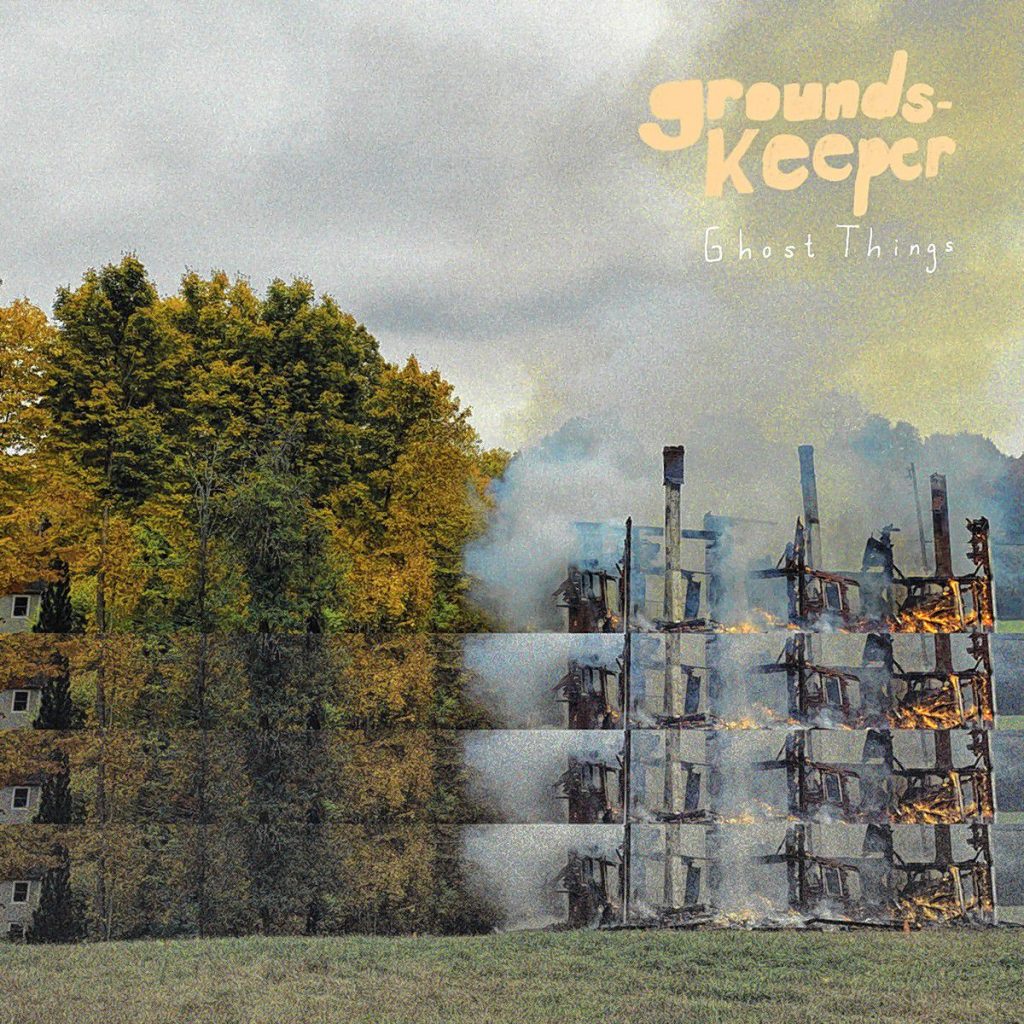 The charred remains of a building smolder in patches of fire as gray smoke drifts over autumnal treetops. That image is cut, and layered multiple times on top of one another for the album cover art of Ghost Things, by Northampton-based Americana-infused indie rock band Groundskeeper, which was released this past month on Dec. 13.

Flames and smoke in an otherwise pastoral scene set the stage for an  experience of dichotomy for the seven-track record with its dreamlike mood that drifts into melancholic introspection where songs comb the depths of memories and psyche.

The album opens with “Xmas,” a mellow folk-tinged song that creates a bucolic atmosphere with hints of early 1970s psychedelia in the vein of Pink Floyd’s “Atom Heart Mother.” The bell-like chimes of piano swirl with radiant pedal steel and bass heavy synth lines.

“School Year,” has more of an Americana feel to it in line with the likes of Wilco or the Avett Brothers. Di Dolori sings with a slight twang, “I can’t pretend that it’s cool being burned again” and “keeping your head in the sand until something gives.” Elements of alternative country, indie rock, and folk fuse together in a song that’s about the growing pains of life and relationships.

One of the standout tracks of the album is the psychedelic pop of “Anymore,” a song with gorgeous vocal harmonies and rip-your-heart-out melodies, all wrapped up in melancholic whimsy. There are layers of regret infused within the song, as the singer laments their mistakes.

“What a waste/ I’ll never admit that it’s true/ In this place/ Always reminded of you/ These days/ Can’t wash my hands of everything,” Di Dolori sings on the 1960s pop-tinged chorus that’s reminiscent of some of the best of The Kinks or The Beatles.

By contrast, “Flight Delay” kicks off with a panicked angular guitar line that dissolves away to reveal harmony-driven rock that’s a delight to the ear drums. This is another song where the chorus is just so iconic sounding that it’s almost impossible to not compare it to some of the greats in rock music that have come before.

“No Prince,” is an earnest and sweetly gentle ballad with a melange of jangly and airy tones — from the arpeggio acoustic guitar work to swelling pedal steel — and understated electric guitar that serve the uplifting nature of the song perfectly.

“You Make Me Try,” has an intro section that kind of sounds like “Michelle” by The Beatles if they used more pedal steel and synth. There’s a sense of pining to the melody and lyrics, “How could I ever deny/ The way you make me try/ Sure, it means nothing to you/ I kept it out of view/ Didn’t want to be that guy.” Self-reflection is evident in this song, which in addition to being an earworm, really resonates emotionally.

And the album closes with “Amends,” an intro sets the scene with piano and drums turning into entropic noise before the sounds of pedestrians on a street corner enter with an acoustic guitar. This transition was one of the most surprising things on this record, and it would have been interesting to see more of these types of sound collages.

Nevertheless, this song continues the introspective and airy qualities of the band’s debut record, before closing with soaring vocal harmonies mixing with wind-like synth and the sounds of people growing distant in the ear.

It’s a bittersweet feeling that permeates throughout “Ghost Things,” which is fitting given the title. Overall, Groundskeeper makes an impressive debut with its mix of dream pop, folk, and indie rock that’s often subtle. You can’t argue that the band is over the top, but again, it would have been great to see more studio wizardry at play much like with what’s heard on “Amends.” But one thing that the band excels at is making music that cuts right to the emotions where listeners can journey with the band through an emotional landscape of insight and wonder.