Sign-Holding Stalwarts: A talk with some regulars at Northampton’s weekly anti-war protest 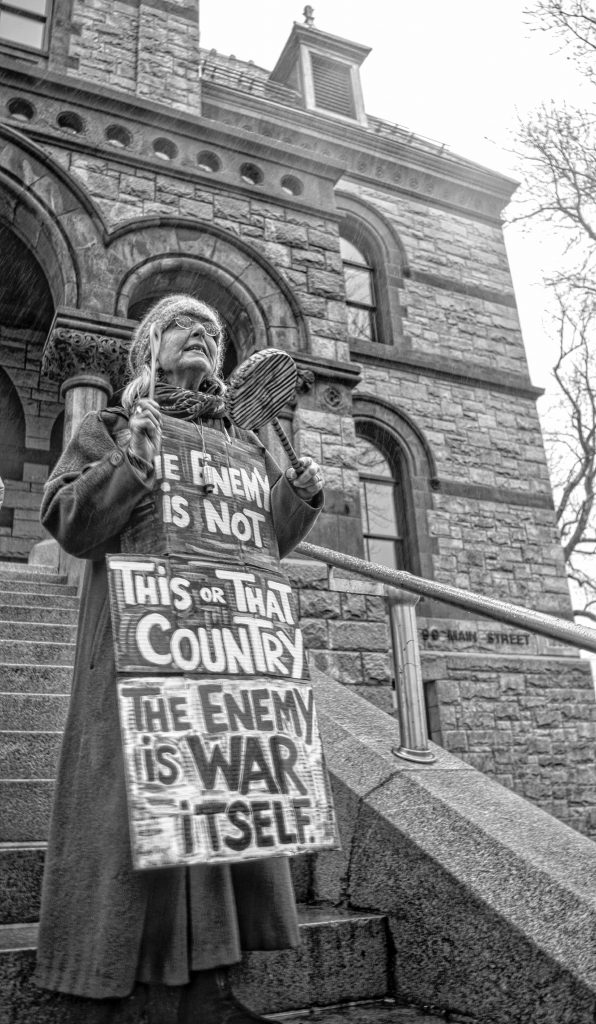 Claudia Lefko, one of the founders of the regular Saturday morning antiwar protest, with her sign on the steps of the courthouse. 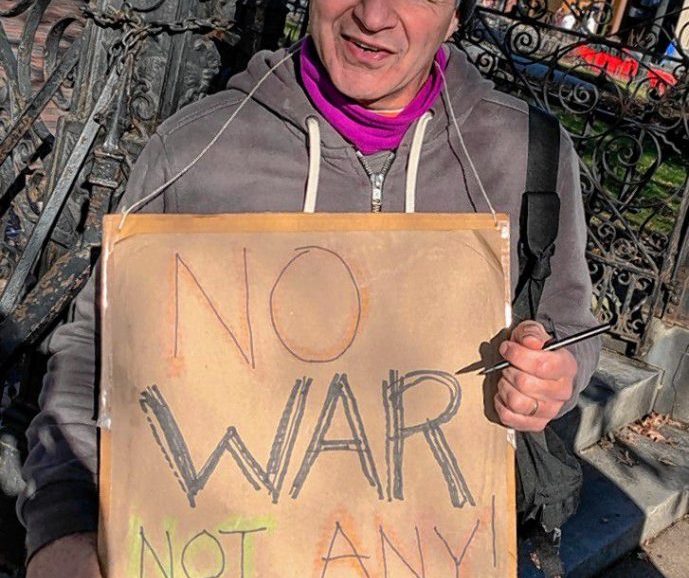 Dave Madeloni with his “No War / Not Any!” sign. 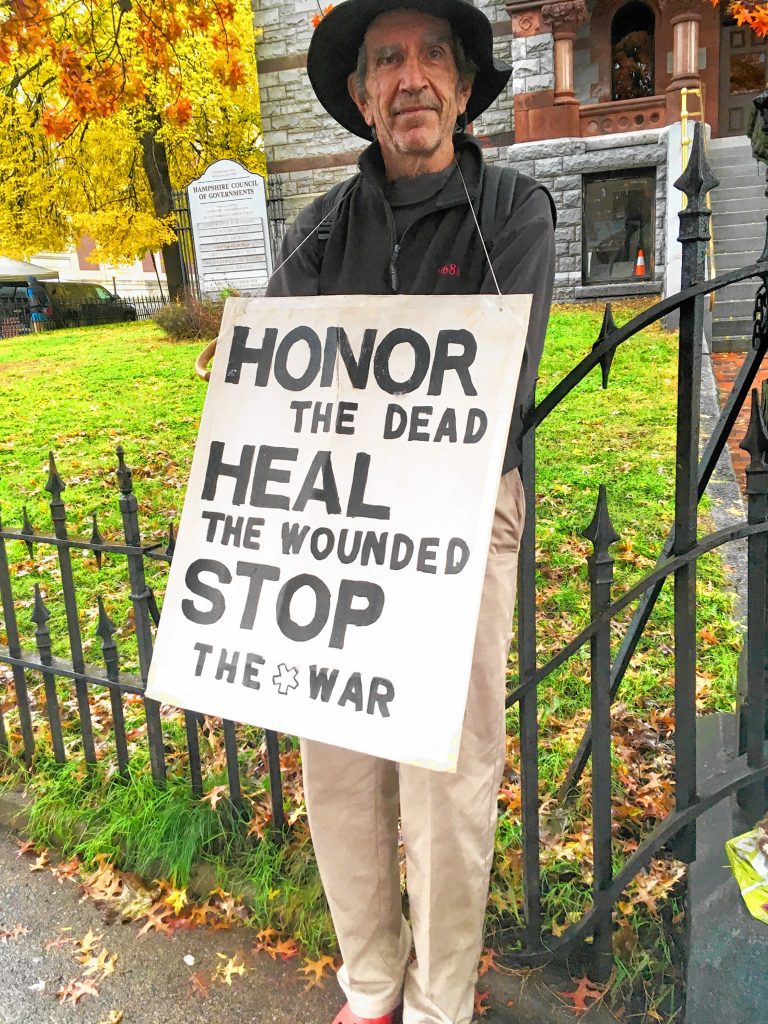 Andrew Larkin with his sign. It reads “Honor the dead / Heal the wounded / Stop the war.”

For past 20-plus years I would head to downtown Northampton to run errands on Saturday mornings and smile at the small group holding anti-war signs in front of the courthouse on Main Street. A few weeks ago, I decided to join them.

I have joined many a protest in the past including a couple of the Saturday vigils. But at the age of 65 at this time in history I felt an increased urgency to fully commit to ongoing actions. So I grabbed my homemade sign — that states “Greed Kills” on one side and “Resistance Matters” on the other — and began my weekly mingling with a small gathering of social justice activists. 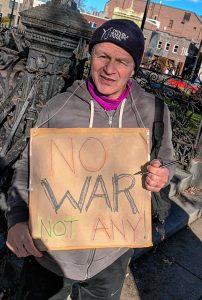 Dave Madeloni with his “No War / Not Any!” sign.

It was a bit awkward at first, but as the weeks passed, I grew increasingly comfortable and fond of the group, which had a core of regulars, and a rotating cast of others. I came to the realization that hanging out for an hour with caring, committed, and thoughtful protesters was a fulfilling way to spend a part of my weekend, that getting out every week and taking a small, seemingly insignificant action with like-minded neighbors — most of whom were my age or older — was an antidote to the despair and existential dread I have been grappling with.

The vigil received a big boost of energy and numbers recently. One week, there were eight of us. After the drone assassination of Qassim Suleimani, the protest swelled to about 200. All of a sudden, the 22-year-old vigil became the focal point of the region’s push-back against Trump’s provocation towards Iran that is likely to lead to another bloody conflict.

I decided to reach out to several of the core members to learn more about the history of the vigil and how their involvement in it. I found that all of them have been activists for decades.

Andrew Larkin has been at each of the vigils I attended. The 73-year-old is a retired physician, author, staunch nuclear abolitionist, and conscientious objector who provided medical services in inner-city Philadelphia in place of fighting in Vietnam. I asked him what it has been like for him to deal with the ups and downs of protesting every week — he said he gets by on hope. He also related the story of a guy getting off the bus in front of the vigil making it known he was not aligned with our anti-war sentiment. Larkin recalled him stating angrily, “You hippies! I lost eight of my buddies in Afghanistan!” 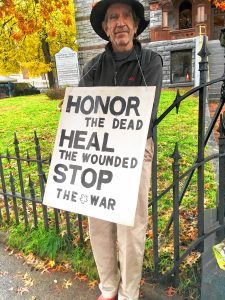 Andrew Larkin with his sign. It reads “Honor the dead / Heal the wounded / Stop the war.”

Larkin’s response? “You are an honorable person and served your country. You were betrayed by your president.” After Larkin explained briefly the details of the betrayal, the vet looked him in the eye, nodded, and walked away.

Miriam and Sidney Moss are both in their 90s moved to the area seven years ago and are committed regulars as well. Miriam, a retired gerontology researcher spoke of their involvement. “We feel it is important to follow the lead of Frances Crowe and many others, who speak strongly against war and for social justice and peace. We hope in our small way we can lend our voices to seek a world that is free from the horrors of the threat of nuclear war and all wars.”

One Saturday I met Steve Snow, a 72-year-old realtor who grew up in Williamsburg. Like Larkin, his anti-war sentiment grew from the Vietnam era. “I’ve cared about this war thing since 1967, especially as a student. Having been in ROTC (Reserve Officers’ Training Corps) earlier, I had felt patriotic. I studied political science, which may have spared me, as I chose to avoid war… To contemplate war while the planet is dying is a sacrilege.”

Paki Wieland, 76, is a well-known activist, and a long-time supporter and participant in the vigil, when she is not off getting arrested at protests somewhere. “I joined the protest with Frances Crowe and Claudia Lefko in 1998 to protest the sanctions, which were killing children and the most vulnerable in Iraq… I lived in the Valley from 1972 until January 2017 when I went to D.C. to witness and to do whatever I could in opposition to the man who became president. I come back often and when I am here I come to the Saturday vigil, to stand with my community in opposition to war! The people who vigil week after week are a sign that we persist!” 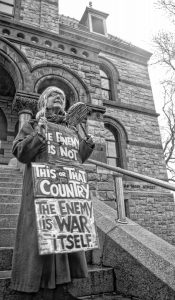 Claudia Lefko, one of the founders of the regular Saturday morning antiwar protest, with her sign on the steps of the courthouse.

Claudia Lefko, 72, returned on a recent Saturday to the vigil, which she helped start, after a long hiatus to work with a team of pediatric oncologists in Baghdad. She shared that she was glad to see that the vigil still gets people’s attention but had mixed feelings about being back in front of the courthouse. “It was, on some level, terrible to be back in that spot, physically standing there, and also that mental/emotional spot, knowing what Iraqis are going through as they wait for the shoe to fall over this crisis. It will play out in their yards, on their streets… it is too sad.”

The vigil following the assassination ended with a chant in honor of the late, great Frances Crowe, the iconic activist who was there at the outset — and an invitation to all to return next Saturday.