Love Letter to a Nightmare 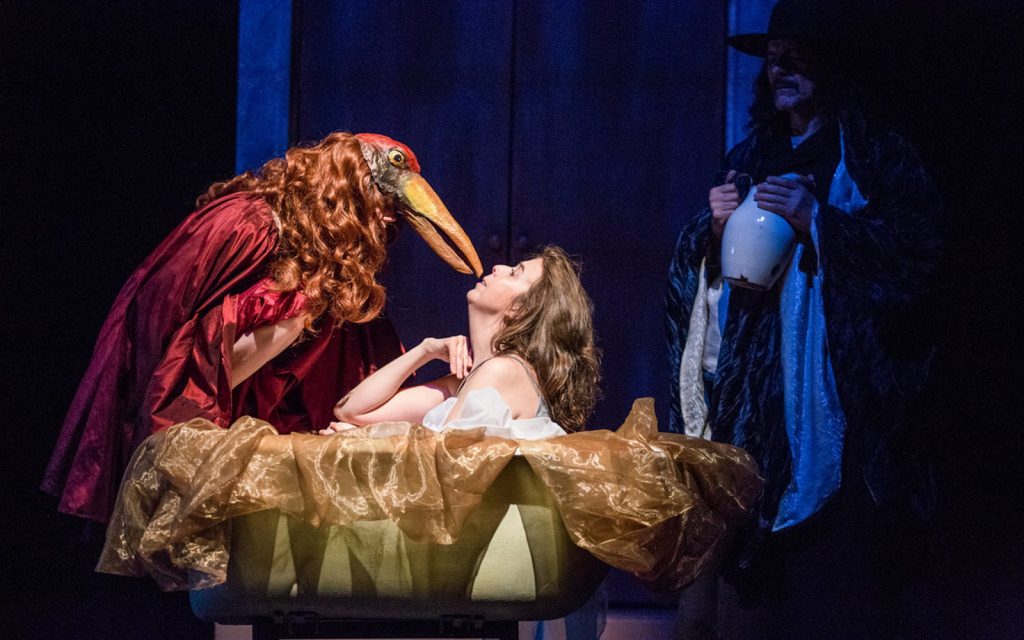 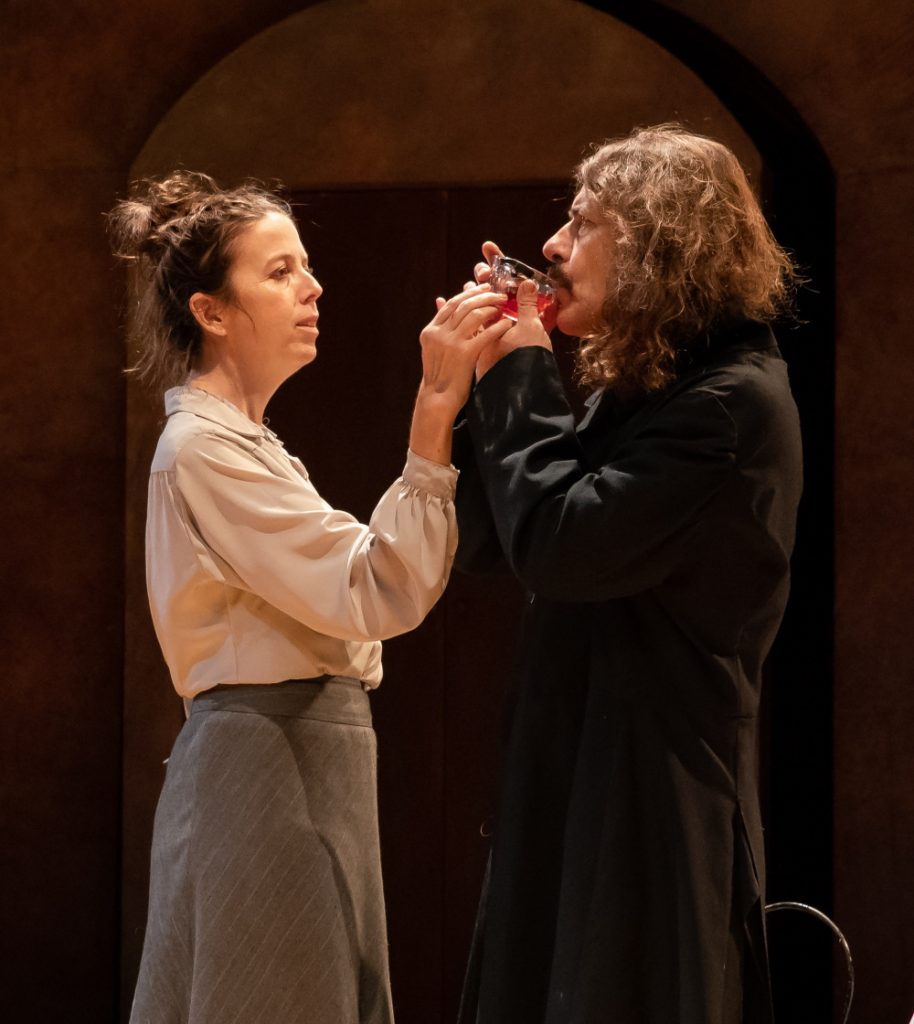 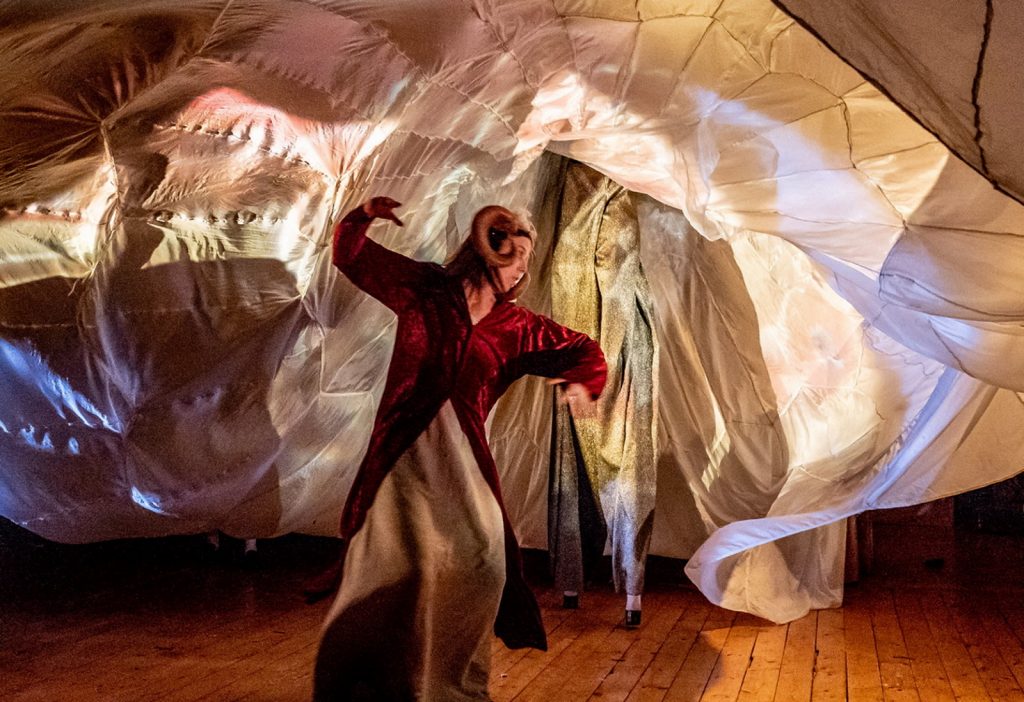 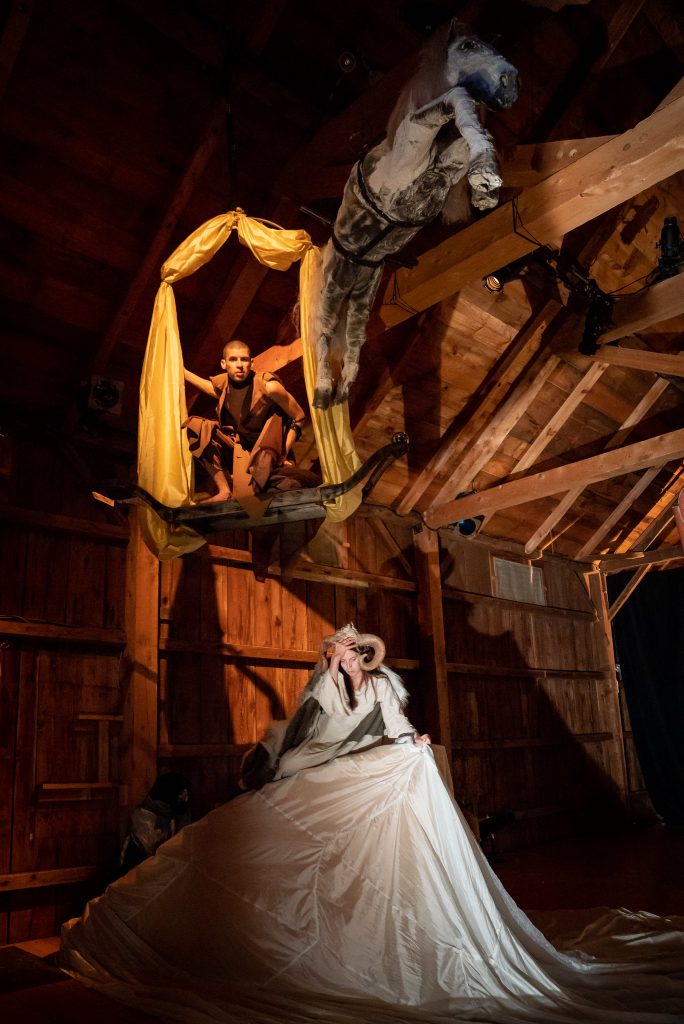 “I secretly believe that I am a goddess with very brief moments of incarnation,” Jennifer Johnson declares, robed in a long white shift, a pair of ram’s horns set on her head. She’s portraying – or perhaps channeling – Leonora Carrington, the free-spirited Anglo-Mexican painter-sculptor-feminist-mystic at the center of Double Edge Theatre’s Leonora & Alejandro. The hour-long piece, premiered in 2018, gives its final performances at the company’s Ashfield center next weekend prior to an international tour. 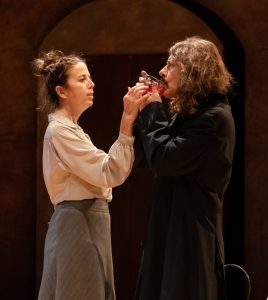 The other title character is the Franco-Chilean filmmaker Alejandro Jodorowsky, played by Carlos Uriona. The two surrealist artists met when, as Jodorowsky says early on, “My guru said, ‘You are too obsessed with the intellect, with the Zen riddles. Art is your path, you should accept Leonora as your teacher. She doesn’t know any ancient Zen riddles, but she has resolved them all.”

The piece blends the look and feel of Carrington’s magical-realist dreamscapes with Double Edge’s unique brand of physical theater. Structured around a memory of the pair’s first wary encounter, it’s as unmoored from realism as the artists’ own malleable view of existence. (Alejandro: “The past is not something fixed and unalterable, it can be changed.” Leonora: “It is a prejudice that makes us perceive time in a straight line – or any sort of line at all – a corkscrew or a zigzag.”)

Reveries dissolve into flashbacks, and pronouncements on the nature of art (make that Art) dance with spectral figures from the unstable past and the ever-present. As Leonora observes, “It is a great thing to be errant in time and space” – a sentiment corroborated by airborne moments in the rafters of the company’s converted barn. 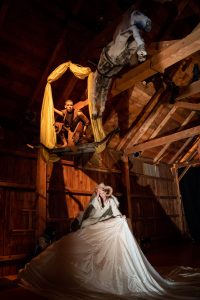 Carrington was an outspoken advocate of personal, sexual, spiritual and political liberty. Her long, adventurous life included hanging out with Picasso in Paris, narrow escapes from the Nazis and a psychiatric hospital, serial marriages, a gang-rape and founding membership in the Mexican Women’s Liberation Movement. All these experiences are touched on in the piece, but the focus is on the quasi-mystical relationship between the two audacious artists.

The subtitle of Leonora & Alejandro is “La Maga y el Maestro,” which could be rendered “The Sorceress and the Auteur.” Stacy Klein, the piece’s own auteur, says it depicts “the magic, mystery and humanity” that suffuses both artists’ work.

The text is drawn from Carrington’s and Jodorowsky’s published works of memoir, fiction and polemic, and most of the dialogue (and monologue) is given to the title characters. Two brief exceptions are Leonora’s black-robed father (“So, you’re up to your to your old bad habits? I see myself obliged to punish you severely”) and the lab-coated doctor in the asylum where she is tied down, electro-shocked and sedated (“You must work strenuously to overcome your diseased imagination”).

“This is a love letter to a nightmare,” Leonora remarks at one point. It’s a line from one of Carrington’s short stories, but perfectly apt for this heartfelt tour of her psyche. Among the artist’s images brought to life on the Double Edge stage are the “guardian animal” spirits that inhabit her visual art, notably an empathetic bird and a brainy hyena. Towering figures on stilts with animal heads prowl the stage. 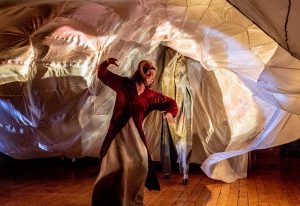 Strains of folkloric and medieval music echo through the space. We glimpse a kitchen where a woman pats tortillas and a whimsical witch’s brew simmers. Billowing fabric suddenly engulfs the stage and just as quickly vanishes. A huge glowing egg appears, which the maga and maestro construe variously as “the macrocosm and the microcosm,” the locus of “secret knowledge, like Eve’s apple,” and the vessel of women’s procreative power.

The company’s research included conversions with people who knew Carrington (she died in 2011, aged 94). Jennifer Johnson told me recently that “Leonora has been very present in this process, and I wanted to embody her as well as possible. In rehearsal the other day,” she recalled, “Carlos and I were talking about how, under all the research, is yourself, and how your story and life connects to the ‘character’ and becomes something surprising, unexpected. That’s your work.”

Carrington and Jodorowsky “literally practiced art as a ‘magickal’ act, studied the esoteric arts,” she said. “There’s belief about the vitality and necessity of art and imagination. Fortunately, we share those beliefs – to value and pursue one’s imagination and creativity, whatever you do in life, and to support others to do so. That’s Leonora, and that’s Double Edge.”