Reading for a cause: Valley Eye Radio volunteers read news for those who can’t read it themselves 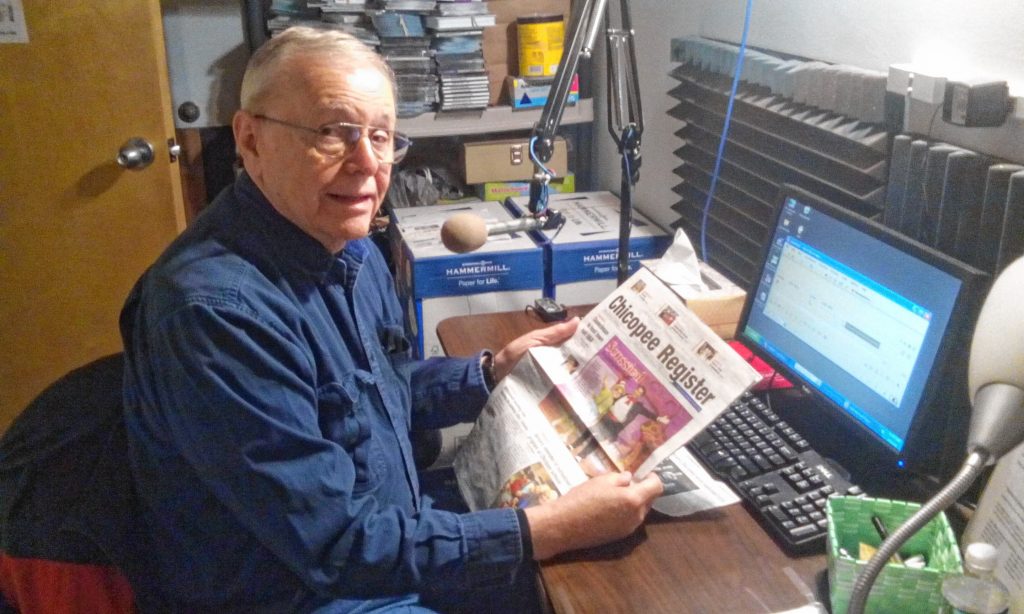 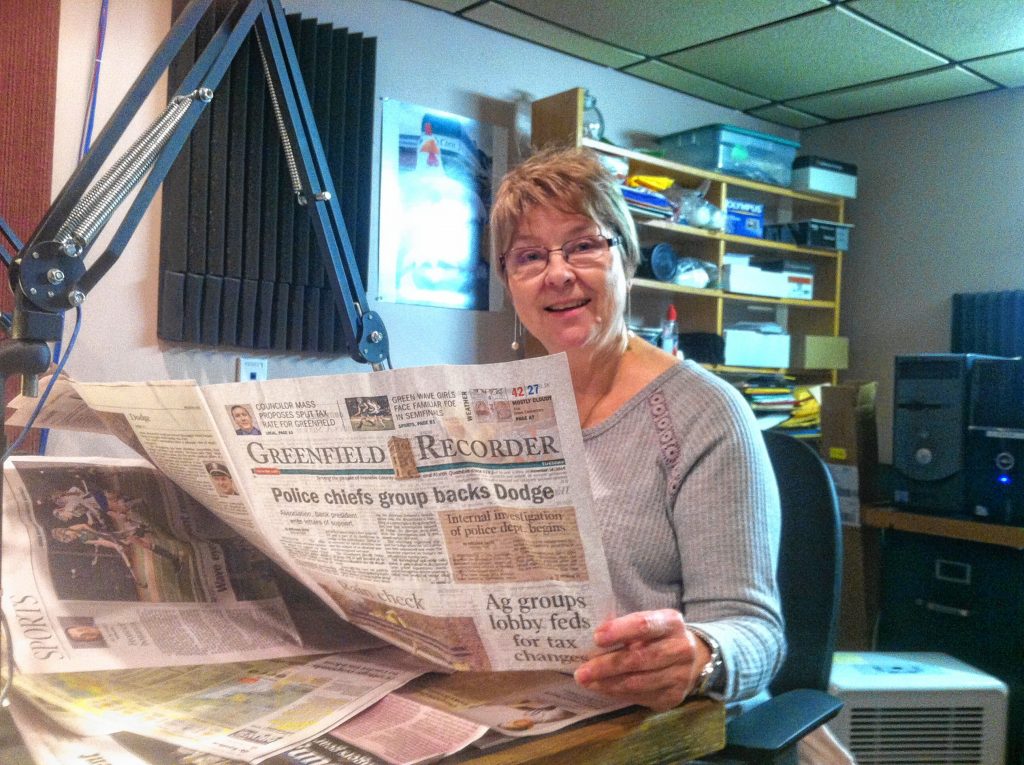 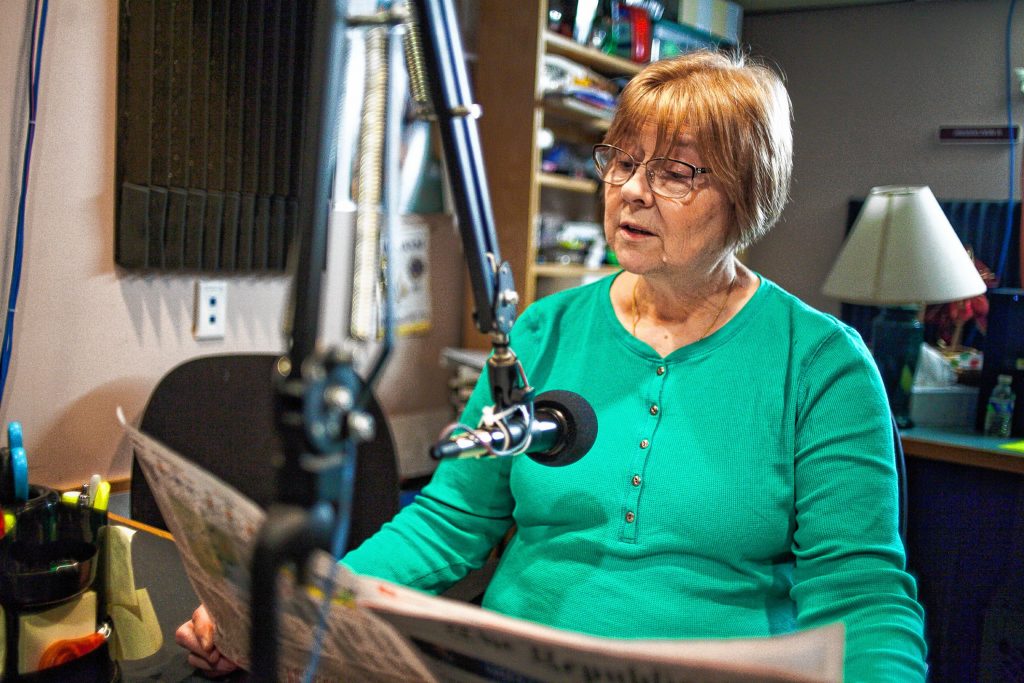 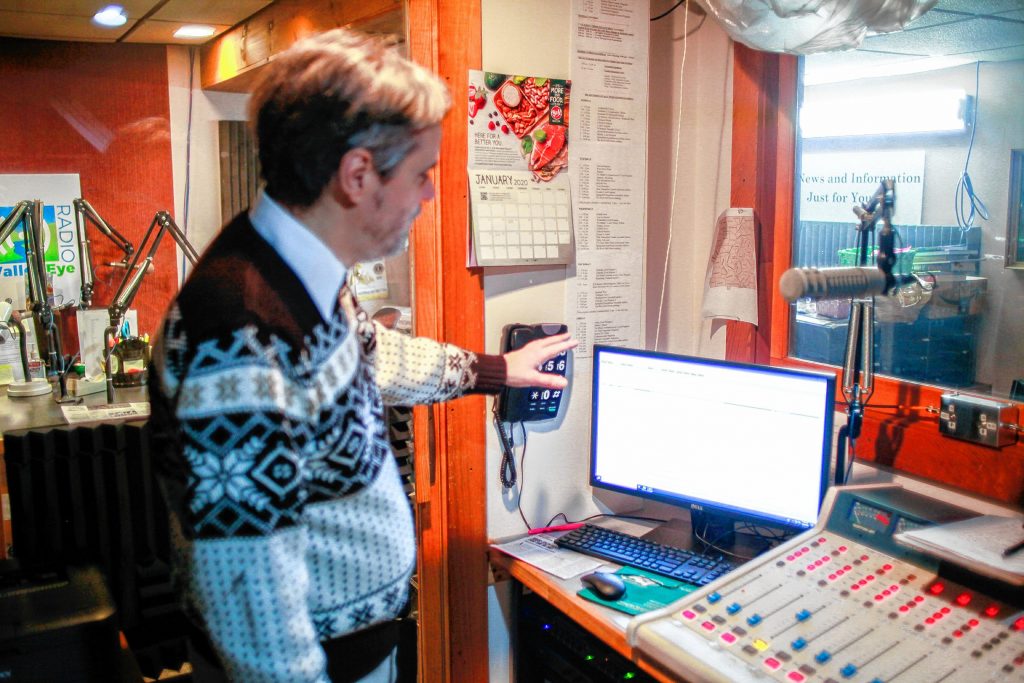 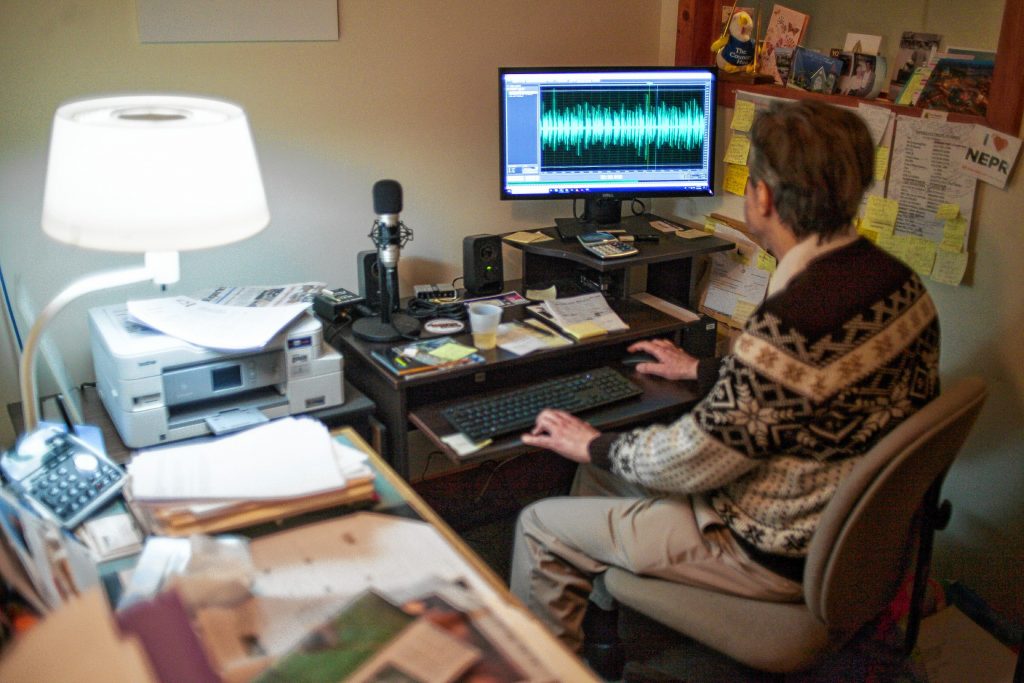 Harold Anderson at Valley Eye Radio in Springfield on Friday. 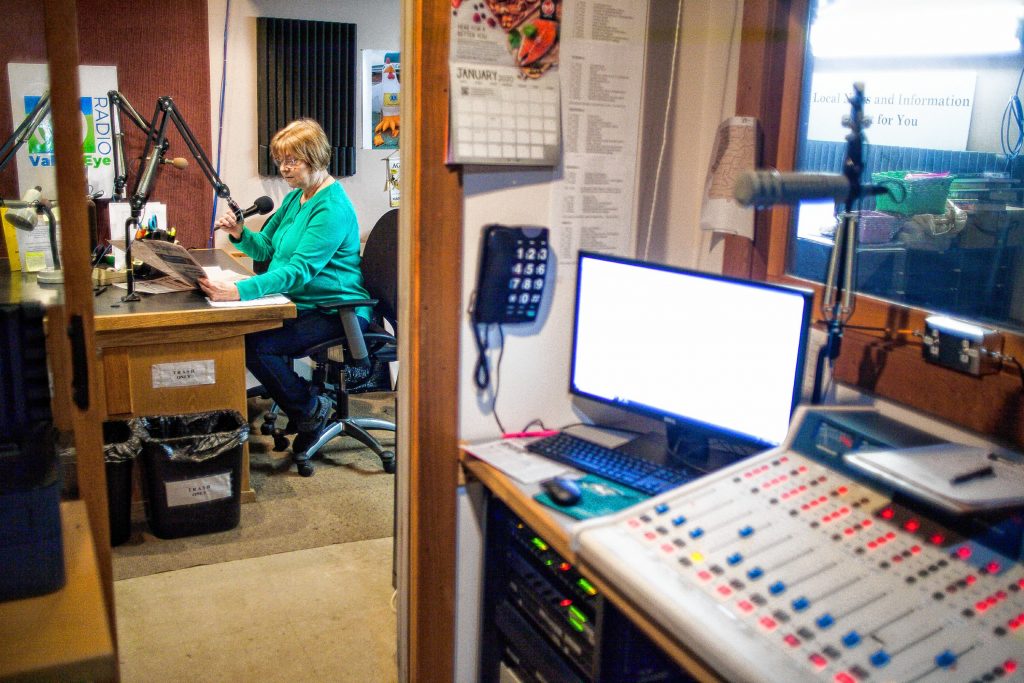 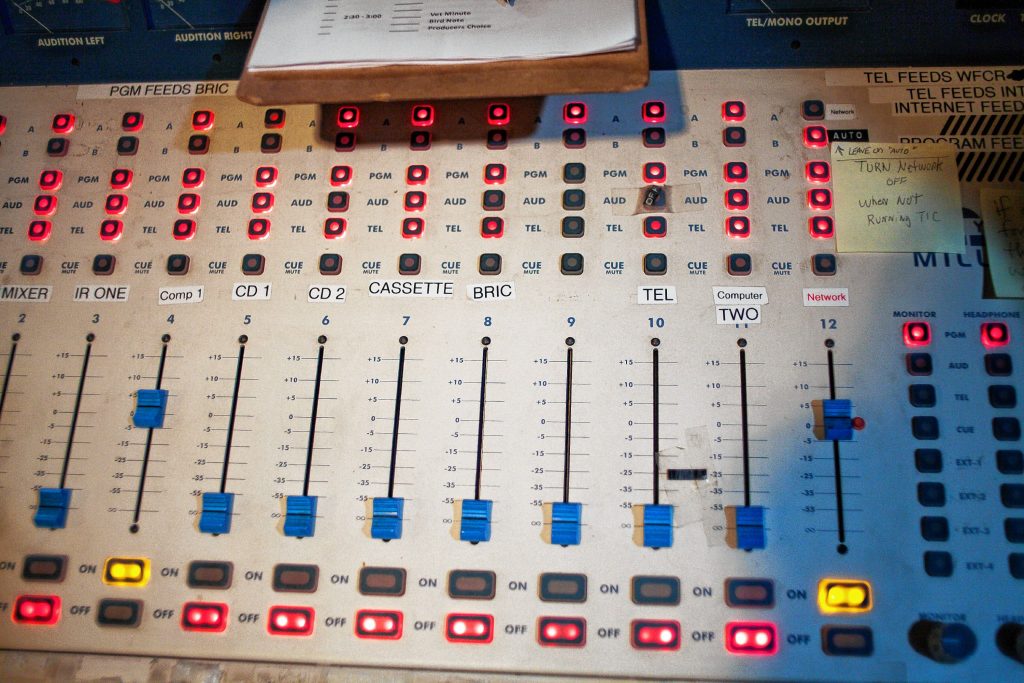 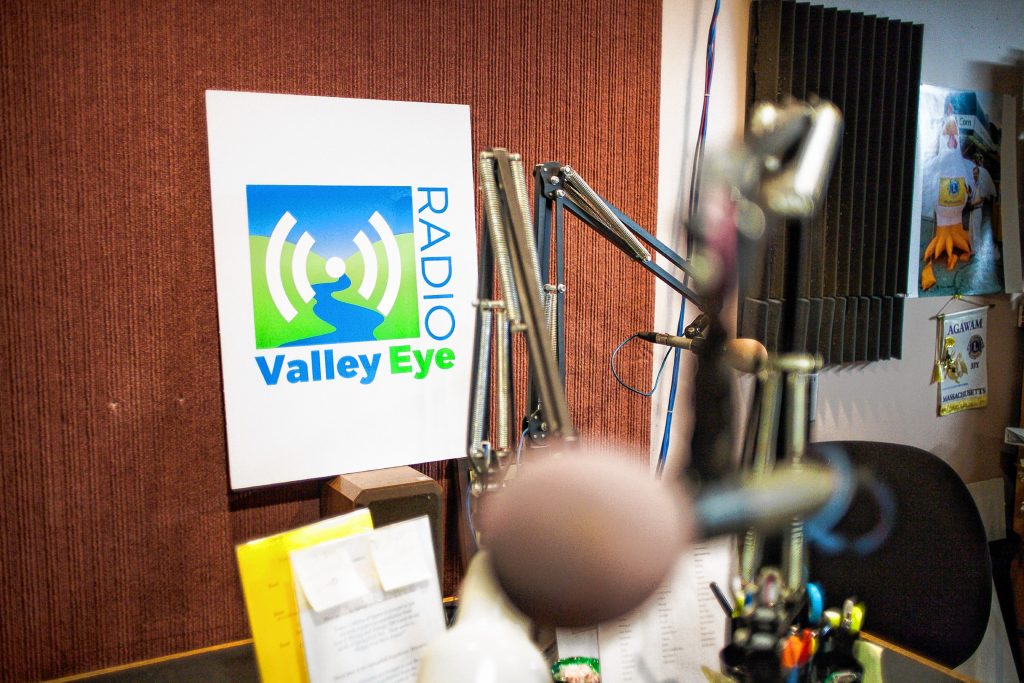 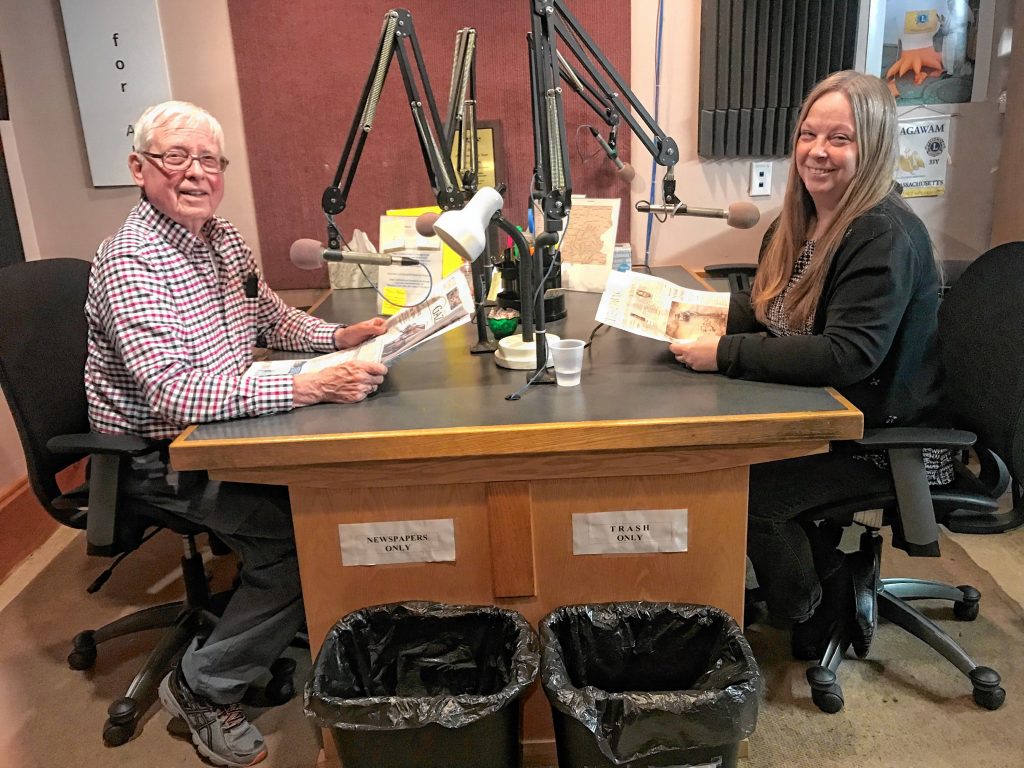 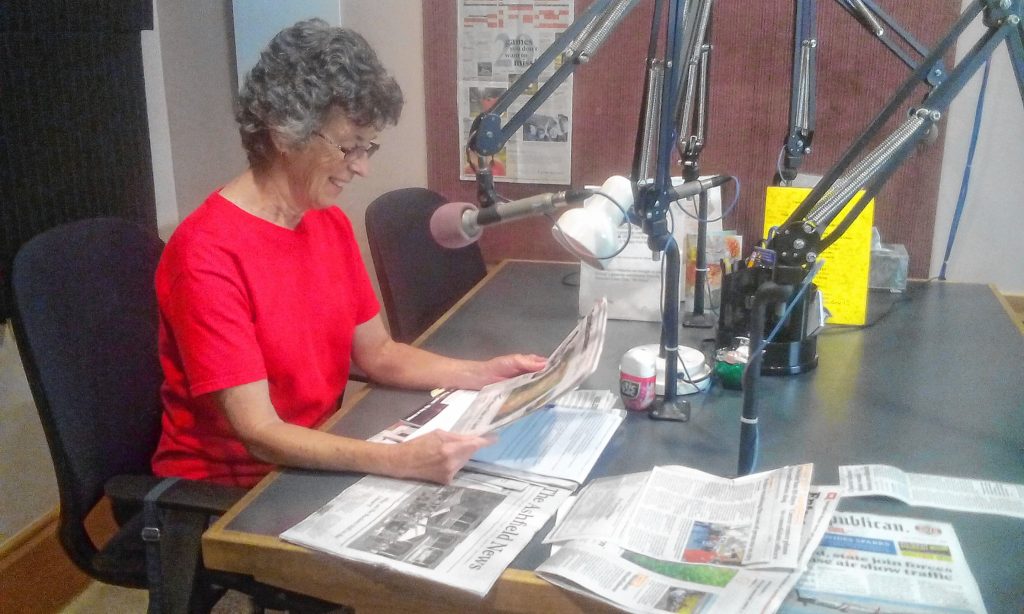 A little over a decade ago, David Manning, 81, retired from Clarke Schools for Hearing and Speech in Northampton, where he worked for 45 years as a teacher and administrator. In retirement, with additional time on his hands, Manning dove headlong into the many literary works he didn’t have time for before — like A Band of Rivals and Eleanor and Franklin by Doris Kearns Goodwin, George Washington by Ron Chernow and The Twentieth Century Limited, which was published by the New York Central Railroad. 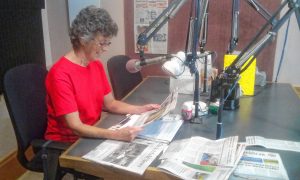 Around that same time, Manning says he noticed an advertisement seeking contributing readers published by Valley Eye Radio, a regional program that broadcasts local information for people who can’t otherwise read because of an impediment.

“It said they were looking for volunteers,” Manning said. “They get newspapers from all over the Valley — they needed someone for the Chicopee Register.” That was a number of years ago. These days, Manning drives from his home in South Deerfield to the station’s Springfield studio every Monday to read for about an hour from the Chicopee publication.

Valley Eye Radio, which has operated for more than four decades, doesn’t have call letters as do other stations. Instead, the program piggybacks on frequencies used by other, larger stations. Because of that, ordinary radios can’t pick it up — only by special devices that can be obtained by calling the station to have one delivered. The radios are free, although there’s a one-time $65 suggested donation (if listeners can afford to pay that much) to help keep the station running. Additionally, a telephone service broadcasts the programming 24 hours a day. 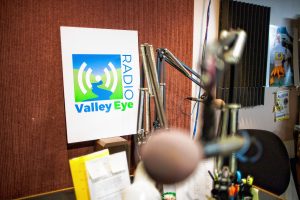 “If you’re listening in Greenfield, you’re listening to (WHAI’s) signal. But you’re not listening to (their station), you’re listening just off the side, where we are,” said Harold Anderson, the program’s director. He paused from editing a recording to give a tour of Valley Eye Radio’s office in the basement of WGBY public television’s building in downtown Springfield. A poster on the wall read, “There are some things a guide dog just can’t do.” And in a recording studio next door, Friday’s afternoon programming played quietly over a control panel.

“It can be fairly automated,” Anderson said, gesturing to a computer system displaying a list of the day’s upcoming shows. About a third of the shows are recorded elsewhere and are broadcast via sharing agreements. The rest of the content is produced in-house.

“At last count, it was 67 or 68 percent local programming,” Anderson said. Throughout the week, about 50 volunteers read selections from more than 30 of the region’s newspapers — including the Daily Hampshire Gazette, which is read live from 11 a.m. to noon on Tuesdays, Wednesdays and Fridays by Eileen Sullivan, John Ptaszek and Mary Zajac and the Greenfield Recorder, which is broadcast Mondays at 11 a.m. by Jeanne DelMonte, of Chicopee — and share lottery numbers, obituaries, game scores and sales printed on grocery store circulars. The Springfield-based program is part of a network of six stations throughout Massachusetts that serve the blind under the umbrella agency the Massachusetts Reading Network, according to Anderson. 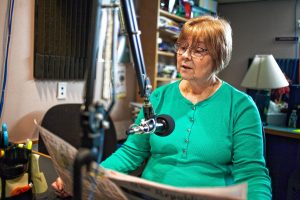 Notably, Anderson said the morning readings are automatically recorded and rebroadcast at 5 p.m. that same afternoon and again during the overnight. Readings from the Valley Advocate are currently broadcast on Wednesdays at 6 p.m.

DelMonte, who has been volunteering since she retired from teaching about a dozen years ago, says she gets a lot of personal fulfillment out of reading the news on air. Likewise, as a retiree, Manning noted that Valley Eye Radio’s mission of helping those with disabilities is a continuation of his decades-long work at the Clarke School. It’s a challenge he understands well; his son, Jay Manning, now 57, was born deaf.

“It’s very hard to grasp the impact that hearing or vision loss has on a person. A blind person can sit in a room and hear someone talk but miss all the color. A deaf person can see everything — the hand gestures — but not hear anything,” David Manning said, noting that, while different, visual and hearing impairments present similar challenges that aren’t always obvious.

Even with support, Manning says his son, who currently works for the U.S. Postal Service and is entirely independent, faces challenges on a daily basis. At family gatherings, for example, someone must make sure he’s cued into the conversation that’s happening around him. 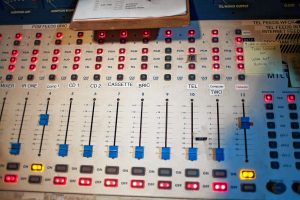 His son’s experience is typical to that of many others, Manning says. Once, for example, a lawyer friend who is deaf shared that for many years she thought her mother possessed magical intuition — whenever her mother went to the front door, someone was there. But when she opened the door herself, there wasn’t anyone waiting.

She couldn’t hear the doorbell and no one had ever explained to her what it was or how it worked.

In a small way, Valley Eye Radio seeks to bridge some of these challenges. Exactly how many people listen to the station each week is difficult to pinpoint because, according to Anderson, there’s no definitive way to collect listener data — although statistics from the state estimate that thousands could be tuning in.

“I just talked with someone the other day who has been listening for 12, 13 years,” Anderson said.

By sharing hyperlocal news, Anderson says the organization helps keep its listeners engaged with their surrounding community. The alternative, solitude, can be a risk factor for someone who is living with a disability, according to Manning. 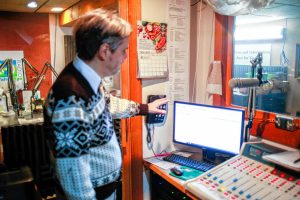 “The danger is that the person gives up and becomes isolated, withdrawn,” said Manning. “That happens all the time.”

For Yvonne Mitchell, of Greenfield, the station is an intentional way that she stays connected with the region at large. Mitchell, 74, is retired and visually impaired.

Having grown up in Greenfield, Mitchell says she recently moved back to the area. She lives close to the downtown strip and is able to walk most places, including to the Senior Center on Pleasant Street, where she’s part of a low-vision support group that meets the first Wednesday of every month at 10 a.m. She connected with Valley Eye Radio through the support group, which is comprised of about 10 members and meets from March through December. These days, she tunes in to the station every morning while getting ready for the day and in the evening before bed.

“I think this is such a wonderful service, Valley Eye Radio. It’s very much needed,” she said. In addition to local news from the Recorder and the Ashfield News, Mitchell says she tunes in to listen to obituaries published in the Springfield Republican and from publications further afield. 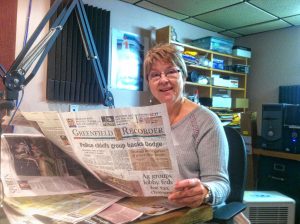 “They have news from all over the state — they have the New York Times. … Because I have low vision, this helps me connect with my community, with news from around the state,” Mitchell said. “The volunteers are wonderful — and you have to stop and think, these are people who are taking their time to go to Valley Eye Radio in Springfield (and read).”

According to Anderson, Valley Eye Radio is in the process of expanding its locally produced programming in the Pioneer Valley and is actively seeking volunteers who enjoy reading aloud and who would be willing to donate an hour or so per week of their time, either at the station or remotely from their own home. Among other ideas, Anderson says he’d like to connect with area hospitals and nursing homes (which could then broadcast the programming via internal networks) in order to bring the station to more people. One major challenge, Anderson said, is that people just don’t know Valley Eye Radio exists. Eventually, he’d also like to make it possible for listeners to tune in digitally. 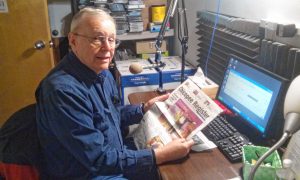 “I could do a lot more if I had the readers,” he said. “Our purpose is to connect people to their local communities.”

For those living with a visual or reading impairment, Mitchell says Valley Eye Radio is invaluable. And for volunteers like Manning, it provides a tangible way to give back.

“I take my hat off to them,” Manning said, highlighting the challenges those with a visual or reading impairment face. “They don’t ask for help. I happen to believe that helping is the best thing we can do.”

For more information about Valley Eye Radio — either to become a volunteer reader or to get a radio — call the station at 413-747-7337 or visit the organization’s website, valleyeyeradio.org. Contact Valley Eye Radio for a listening schedule.