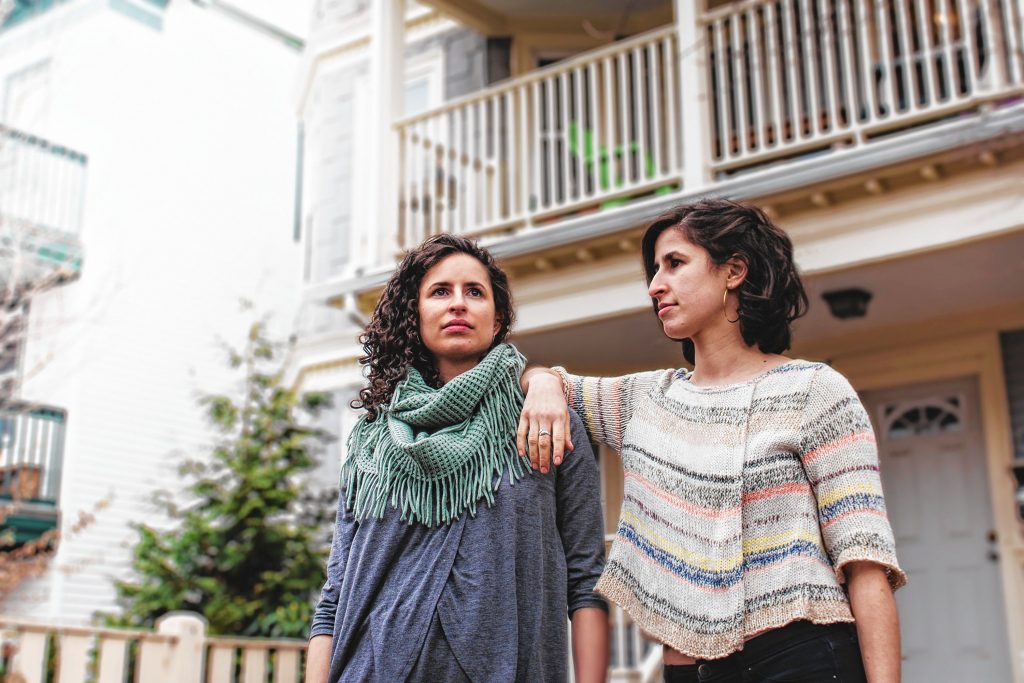 “There are stars, there is music, but where are you? I am calling you home tonight.” The beginning lyrics to opening track “Come On Home” from the latest release from Americana duo Ari & Mia welcomes you into their album as if it’s an intimate dinner party, with the fire roaring in the fireplace and a savory smell coming from the oven. It’s comfort food. 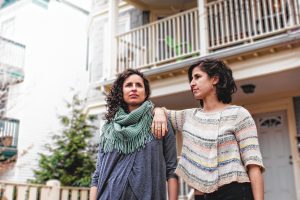 The two have blended a strong — yet dainty — mix of fiddle, banjo, and cello with percussion sprinkled to taste. Their whimsical vocals intertwine with each other and sometimes it’s hard to decipher the two voices apart from each other. The duo would easily be seen/heard on the same bill as Ani DiFranco, Regina Spektor, Rasputina and Jewel.

Sew the City was released in March 2019. Their fourth studio album was recorded in an old, quiet farmhouse in Parsonsfield, Maine.

“An old farmhouse was the perfect place to access quiet and creativity,” Ari explained to me through a recent email, “and we allowed ourselves to be influenced by the place itself, like when we recorded “Unquiet Grave” directly after we had visited the extremely old and (definitely) haunted basement. It was late in the evening and raining buckets outside.”

That particular track is soothing, a lullaby, like the rest of the 10 tracks. The album itself has a theme, paying homage to their fierce female ancestors. Tracks “Til I Die” and title track, “Sew The City” are both songs about their maternal and paternal grandmothers. “Til I Die” hosts one of my favorite lyrics on the whole album: “Charlotte sat on the porch, nail polish like a cherry in her hand, each coat of paint a deeper red, fanning fingers as they dry.”

“Roll Away” tells a tale about the carpet that was once in the kitchen in Mia’s home that her husband’s grandparents built in the 1940s. “All the meals were eaten, sinking deeper into the floor of the kitchen.” It’s playful, but it also paints a picture of a multi-generational family memory that will soon be remembered as a family song.

“We also cover a song by our all-time favorite hero Joni Mitchell,” Ari said. “The Fiddle and the Drum” is a letter to North America; written in 1969 as an anti-war song, it wonders why this country has ‘traded the fiddle for the drum’ while still remembering ‘all the good things you are.’ We found this to be a fitting song to resurrect and rearrange at this particular moment in our country’s political climate and felt it was a poignant and thought-provoking song with which to end the album.”

They aren’t the first musicians to cover this classic. A Perfect Circle covered it on their 2004 album Emotive which was an album of collected anti-war covers. I personally like Ari and Mia’s version better — its powerful. The APC was bland and my least favorite cover on that album.

The duo are sisters from Mass with one, Mia, living here in the Valley. They embark on a five-date Northeast tour with Australian folk singer/songwriter Lucy Wise. This will be the third tour the duo has done with Wise in their five years of friendship. At each show, the two acts play a set of music each, then they come together for several songs together. The three consider themselves musical soulmates.

“I first met Lucy while I was on tour in Australia with fiddler Hanneke Cassel in 2011,” Ari said. “From the connections I made during that trip, I was asked back to teach at a camp in 2014 and Mia and I planned to tour before the camp doing co-bills with Lucy’s band.”

They continued touring together and enjoyed the musical and personal connection they all shared. Wise adds in a ukulele and guitar to her music, so combined, the three have an array of strings to present.

“The last time we were at the Parlor Room it was a split bill with Lula Wiles in June 2017 and we played to a packed house,” Ari said. “We are really looking forward to being back there, this time in the cozier month of February and with another incredible trio, Kalos.”

Jennifer Levesque writes the twice-monthly column, Valley Show Girl. You can reach her at jlevesque@valleyadvocate.com