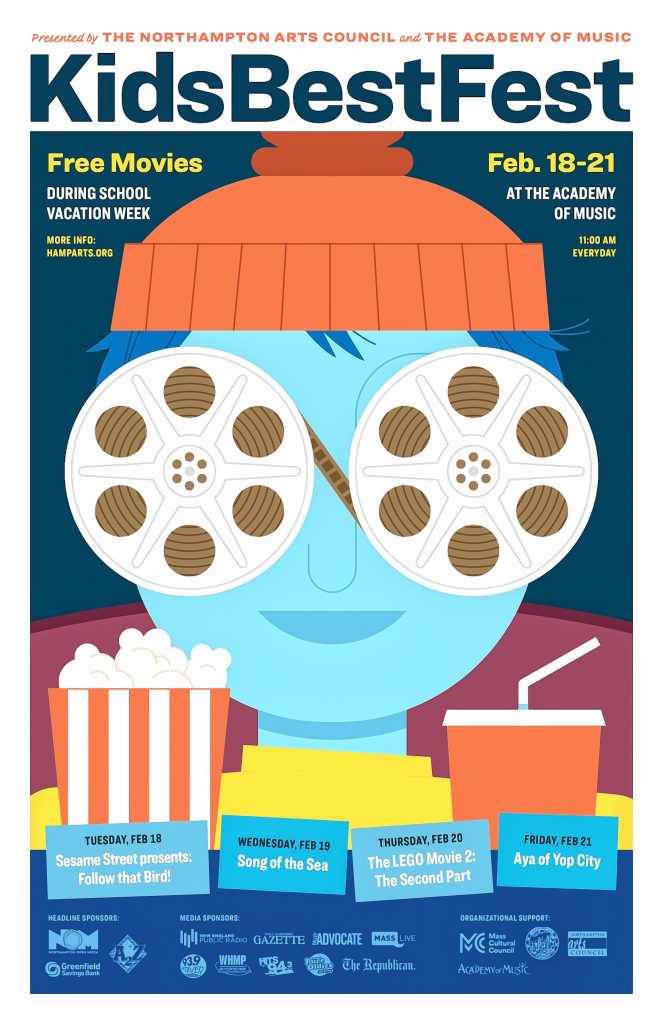 I still remember that day, bright with promise, just after the new year had dawned, when my children finally had to go to school again. Don’t get me wrong, I love the little scamps more than I’ve ever loved anything on this earth, but two weeks of holidays, sugar, and interstate travel take a toll. And now, just as we’ve found our groove again, comes February break.

Luckily for us, this break always comes with a built-in release valve: the KidsBestFest film festival is an annual tradition that is programmed to coincide with the February school vacation. Presented by the Northampton Arts Council with free admission and a week’s worth of kid-friendly movies on the screen at Northampton’s Academy of Music, the fest is a great (and budget-friendly) to get out of the house on even the colder days of the break. This year, films run from Tuesday through Friday, with screenings starting at 11 a.m. each day. As an added bonus, the animated short Weird Healing, from local animation studio Opertura, will be shown before each day’s feature.

First to screen is Sesame Street Presents: Follow that Bird!, a G-rated 1985 adventure that finds Big Bird uprooted from Sesame Street (by an overzealous social worker) and sent to live with a family of dodos in Illinois. Unhappy in his new nest, Big Bird takes flight (metaphorically speaking) in an attempt to return to the family he misses on Sesame Street. Along the way, he meets up with a friendly trucker, helpful kids, and the Sleaze Brothers, who run a shady traveling carnival. As the rest of the cast gears up to track down their missing friend, it’s a nice reminder that sometimes it’s the family we choose for ourselves — whether or not we all look alike — that forge the strongest bonds.

The next morning, the Academy Award-nominated Song of the Sea (from the creators of The Secret of Kells) brings the story of the Selkies to the big screen. The Irish legend about half-human, half-seal creatures gets a new spin in this hand-drawn story. As the last of the selkie children, young Saoirse must discover the meaning of her identity before the world of magic slips away forever. To do it, she’ll need the help of her human family, particularly that of her brother Ben, who blames her for the disappearance of their mother years earlier.

KidsBestFest runs through the Friday of the vacation week; visit the Academy site at aomtheatre.com for a full schedule. And while admission is free, donations are encouraged to help keep future festivals open to all. So give if you’re able, and get there early: seating is limited to 400 seats.

Also this week: more classic kid fare comes to the screen at Amherst Cinema, which will host a weeklong run of the Looney Tunes Revue for the February break. The nine animated shorts, directed by a Who’s Who of animation legends, cover more than a decade of iconic cartoon history. The hour-long shows run Monday through Friday and start at noon each day. Some of the cartoons included in the collection are The Big Snooze (1946), which finds Elmer Fudd tearing up his Warner Bros. contract and quitting cartoons; One Froggy Evening (1955), in which a frog sings Tin Pan Alley hits; and Duck Dodgers in the 24½th Century, a must-see sci-fi parody that pairs Daffy Duck and Marvin the Martian in a battle over the elusive “shaving cream atom.” Voted one of the top five cartoons in history by a group of 1,000 animators in 1994, this one is a classic for a reason.