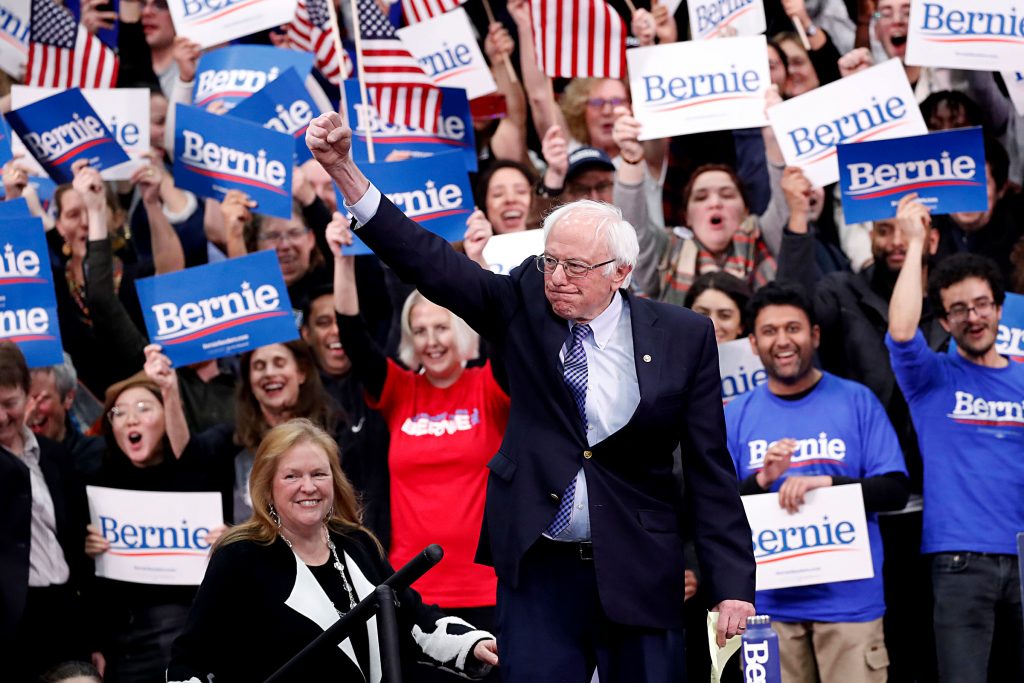 Democrats, and truly all Americans outside of the president’s devoted base, have now been spending years trying to think up who best to challenge Trump to vote him out of office.

The editorial staff at the Valley Advocate is unanimous. Our choice is Vermont Senator Bernie Sanders.

Much has changed over Sanders’ nearly 40-year career in office, but his core message hasn’t: our economic system benefits wealthy corporations and those at the very top at the expense of working people.

The mainstream media is fond of calling Sanders’ positions “far-left” and “radical,” but most of them, including a $15 federal minimum wage, Medicare-for-all, free higher education, an aggressive approach to climate change, and opposition to senseless wars, are supported by the vast majority of people. Polling in particular of Medicare-for-all has been as high as 70 percent — a figure that includes Republicans. According to a recent Pew Research poll, two thirds of Americans support a $15 minimum wage.

It’s no wonder people like these policies. They benefit the vast majority of people. Increased wages mean that low-income families have the ability to put food on the table, pay their bills, and stay out of debt. Medicare-for-all eliminates inefficient middlemen now paid for by exploding health care premiums, copays, and deductibles. As Sanders often points out in his stump speeches, the United States is the only developed country not to offer a health system like Medicare-for-all, and the country still pays more for health care than any other.

And yet, wealthy corporations with the ability to spend unlimited amounts of money to influence elections have been able to sway politicians to oppose or ignore these popular programs.

Sanders stands in a class by himself with regard to economic issues; he states clearly what the problems are and has long proposed ways to fix them. But economics are far from the only stances he gets right.

On the most critical issue of our time — climate change — Sanders, as usual, proposes the boldest action. Endorsing the Green New Deal backed by Alexandria Ocasio-Cortez, Sanders consistently receives the highest marks from climate organizations including Greenpeace, EcoWatch, and 350 Action.

Sanders is unequivocal on supporting the right to an abortion, equal rights for LGBTQ individuals, and is committed to reforming the criminal justice system to root out institutional racism against black, brown, and indigenous individuals. Sanders’ backing of justice for all dates back to his college days when he was arrested demonstrating in support of civil rights in the 1960s.

On foreign policy, Sanders’ vote against the war in Iraq along with his decades of opposition to imperialist foreign policy assures us he has the judgment to be commander in chief.

Sanders’ policy positions alone are convincing, but we also believe that Sanders has the best chance to win against Donald Trump in November.

Public head-to-head polling has consistently placed Sanders well ahead of Trump nationally, both in 2016 and during this election cycle. Sanders stacked up better than Hillary Clinton, who lost by the narrowest of margins in three midwestern states. He continues to score among the top of the pack of current Democratic candidates, as well.

Sanders is the most popular senator in the country, and has consistently been viewed as being the most honest and trustworthy candidate — a stark contrast to Trump’s thousands of lies told while in office. This dynamic reveals Sanders’ twin advantages over other candidates — he is both someone with deep inside knowledge of how our political system works, and someone who can rail against the reasons why it does not function for middle class and working people. Once dubbed the “amendment king” during his time in the U.S. House for his talent for passing bipartisan amendments to legislation, Sanders has strong positions, but also a track record of working with others to get important legislation passed.

In the 2016 campaign, he reached out to voters from areas long ignored by Democratic candidates — including at Liberty University, the largest evangelical Christian university in the country. During the 2020 campaign, he was the first candidate to do a town hall on Fox News, where he surprised commentators when the majority of the conservative audience raised their hand when asked whether they would back a Medicare-for-all plan.

Sanders also inspires passion among his supporters — he has received the most donations of any candidate in the history of the country, with an average donation of less than $20. He had popular vote victories in the first two nominating states of Iowa and New Hampshire. Taking on Trump, with his devoted base, Democrats will need someone who likewise inspires supporters to get out, volunteer, and fight back against the smearing any candidate will likely face.

Many have expressed reluctance to support Sanders in the primary, not because they disagree with him, but rather because they are concerned his label of “Democratic Socialist” will be used against him and other Democratic candidates down the ballot. But, remember that this is Trump. No matter who the Democrats run, Trump and his surrogates will describe them as “socialist,” and Sanders has spent decades responding to the label, and winning elections. Particularly effective has been his response that while he supports Democratic Socialism to benefit working people, Trump and Republicans have supported “corporate socialism,” which benefits powerful corporations and the top 1%.

It’s hard to imagine a more important election. With the shameful results of the recent impeachment behind us, it’s clear that Republicans in Congress — with only one exception — will back the president no matter what he does. There are no meaningful checks on this corrupt and criminal president, so getting him out of office will be up to the voters. Senator Bernie Sanders is the one best suited to accomplish that.