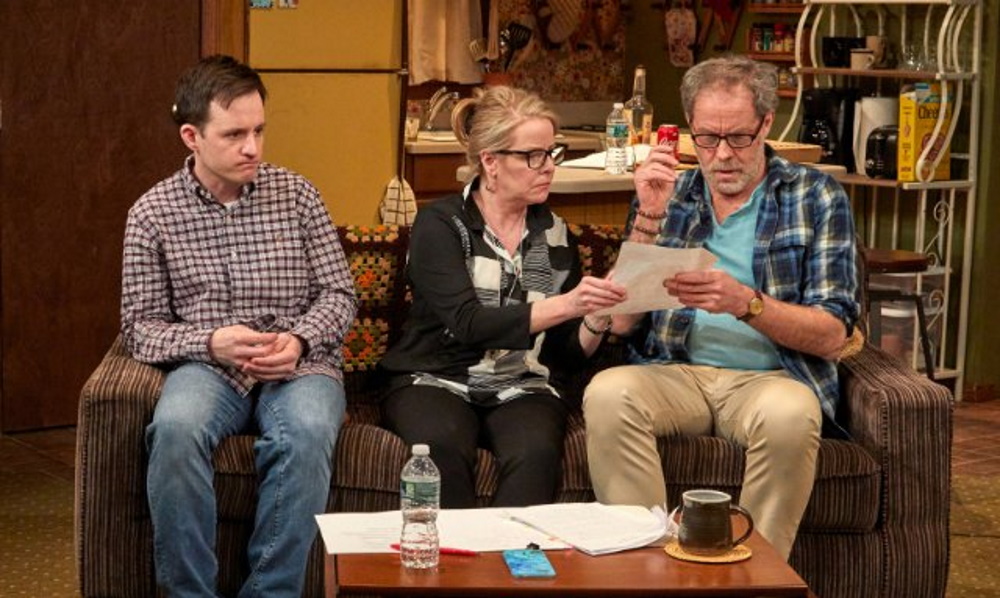 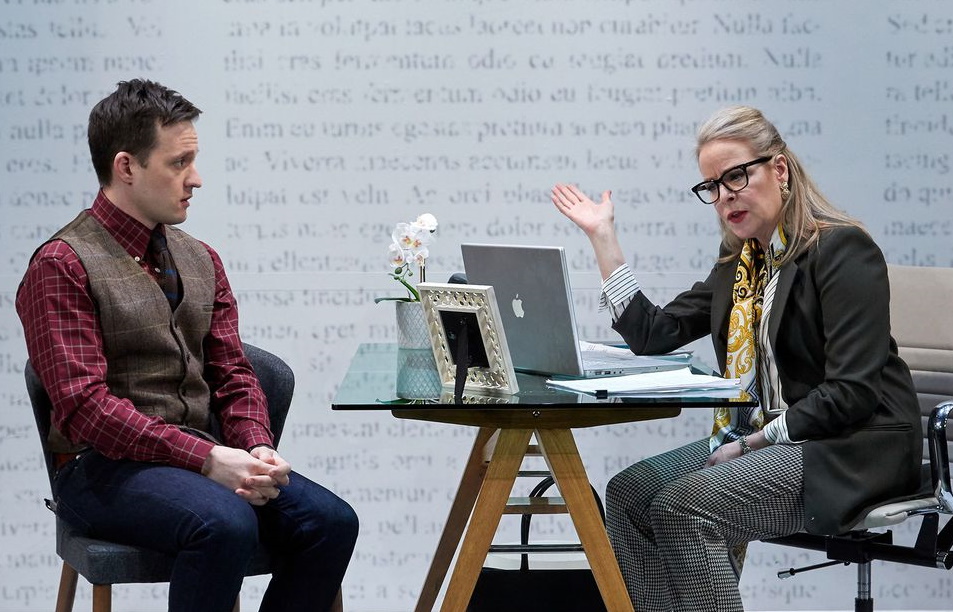 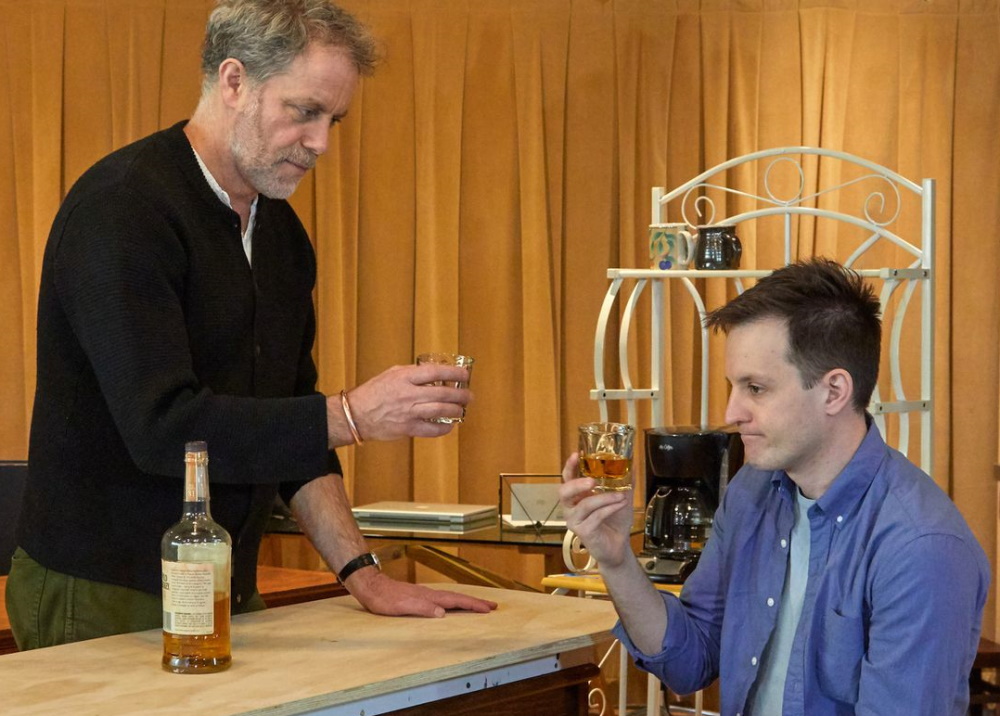 In these fake-news days, when fiction rules the cybersphere and truth is called a lie (and vice versa), the lifespan of a fact can be the length of a tweet (if it’s not stillborn). The play now running at TheaterWorks in Hartford (through March 8) can’t help but be viewed against this background, but The Lifespan of a Fact is concerned with a subtler distinction. As director Tracy Brigden says in her program note, “When does a bit of embellishment become a lie?”

That’s the question at the heart of the play and the crux of the dispute between John D’Agata, a self-important writer of “creative nonfiction,” and Jim Fingal, a young, bright, puppy-dog eager intern in the office of John’s editor, who assigns Jim to fact-check John’s article, advising him that “he’s been known to take little liberties.”

In this instance, the liberties begin in the very first paragraph.

The facts on which this “true-ish” play is based are these: In 2003 D’Agata submitted a first-person essay focused on a teenager’s suicide in Las Vegas to Harper’s, which rejected it. When The Believer magazine subsequently picked it up, Fingal was assigned to fact-check it. Conflict ensued, creative license pitted against verifiable facts, and the piece wasn’t published till 2010.

The play, by Jeremy Kareken, David Murrell and Gordon Farrell, is based on a subsequent book about that editorial tussle, co-written by D’Agata and Fingal, with a layout that graphically illustrates it: D’Agata’s original manuscript, with Fingal’s notes and corrections in the margins.

The play itself could be a case study in liberty-taking in the name of art. The two antagonists are named John D’Agata and Jim Fingal, but the editor and most of the dialogue are invented, and the seven-year squabble is compressed into 80 minutes covering four hectic days.

The article contains numerous factual inaccuracies, large and small – from the number of strip clubs in Las Vegas to the means by which other young suicides did themselves in – and Jim jumps on them like a terrier. John’s haughty defense is that “the wrong facts get in the way of the story,” adding, “I’m not interested in accuracy; I’m interested in truth.”

This artistic credo put me in mind of Hunter S. Thompson, the “gonzo” journalist whose work was unapologetically subjective and impressionistic. The comparison occurred to the playwrights as well: the essay’s original title is “Life and Death in Las Vegas,” an echo of Thompson’s signature piece, Fear and Loathing in Las Vegas.

While the play revolves around a clash of aesthetic values, even worldviews, it’s a comedy, playing it mostly for laughs. The two men’s debate quickly descends from principled to petty, the one as protective of his every flight of imagination as the other is hostile to the slightest deviation from perfect accuracy. The play’s ultimate conclusion is rushed and unconvincing, but then, the one in real life took years to resolve.

TheaterWorks’ production moves briskly on the momentum of three engaging performances. Nick LaMedica is the punctilious fact-checker, an obsessive nerd who wields a red pencil like an avenging sword. Rufus Collins is the pugnacious author, gradually almost enjoying the quarrel’s cut-and-thrust.

Tasha Lawrence, who was terrific in A Doll’s House, Part 2  last season at TheaterWorks, is the snappish editor, moving from brisk efficiency to incredulous exasperation, standing between the two combatants, sometimes physically, as they duke it out over textual minutiae.

Brian Prather’s set transitions smoothly from the magazine’s (presumably New York) office to D’Agata’s Las Vegas apartment. Zachary Borovay’s proscenium projections include snippets of the manuscript and the texts of emails, one of which – in a comment on the theme? – contains a typographical error.

Next up at TheaterWorks is a special event – a one-man, whole-audience adventure in memory, happiness and healing. It’s Every Brilliant Thing, by Duncan Macmillan with Jonny Donahoe.

Here’s what I said about it when it was in Chester Theatre Company’s 2017 season:

Everyone needs something to live for. Some of us have a much harder time finding it than others. So, if you’re a young child and your mom has just tried to kill herself, what can you do about it? Give her a list of everything that makes the world beautiful and life worth living.

This is a one-person show with audience participation – in this case, volunteers given words or phrases which they are to shout out on cue. A gimmick, but one that works superbly and goes far beyond mere gimmickry. Though the play’s wrenching subject is suicide, there’s not a scrap of preachiness or sentimentality in it. In fact, it’s one of the funniest plays of the season, and at the same time one of the most heartfelt.