Cinemadope: Toon in — animation for the late-night crowd 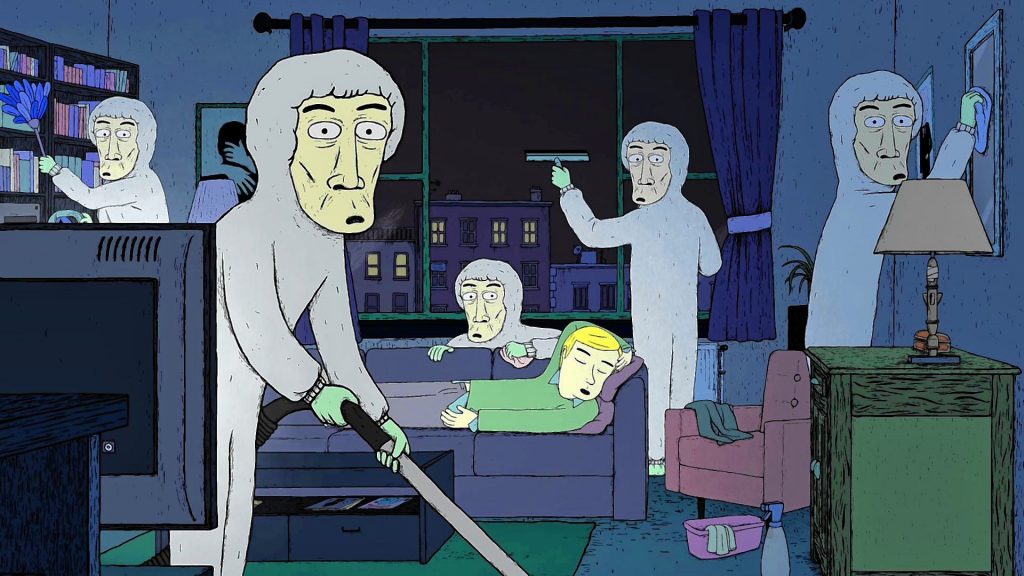 I’m Going Out For Cigarettes

In the run-up to the Oscars a few weeks ago, you might have seen a flurry of activity from local theaters as they featured the yearly roundup of animated short films that were vying for the golden statuette. It’s always a treat to see that collection of film on the big screen, and in front of so many eyeballs that would almost certainly not see them otherwise.

And yet one can’t help but feel that if you dig just a tiny bit deeper, you’ll find a vast world of animation that is still less likely to be given a platform. The more obscure, fringe-dwelling kind of animation that once might have existed only in the mind of its maker, but now, thanks to the democratization of an increasingly digital world, can find form in the “real” world. The Oscar nominees, after all, are almost by definition a top-five by committee. Their audience is meant to be more broad, and their appeal more universal.

In contrast, then, consider Animation Next, which arrives this week at Amherst Cinema as part of the theater’s ongoing Late Nights series. Unspooling at 9:45 — the late start alone should give you a sense that these aren’t Looney Tunes — the program of shorts collects the cream of the crop from the annual GLAS Animation Festival in Berkeley, California. Since 2016, the four-day fest has strived to highlight new film that pushes the boundaries of what is possible in animation. It’s probably not the animation festival for everyone, but if it’s for you, it’s really for you. Amherst’s curated collection, clocking in at just 88 minutes, gives you a chance to test the waters. Here is a look at some of the films included in this year’s fest.

In Osman Cerfon’s I’m Going Out for Cigarettes, the most important character may be the one that is missing from the story: an absent parent whose presence hovers over the lives of those he left behind. Cerfon, whose own story inspired this film, speaks of riding the bus as a young man, looking at his fellow passengers and wondering if one of them could be his father, hiding in plain sight. In his film, 12-year-old Jonathan sees strange men all around him, each of them with the same face.

Nikita Diakur’s appropriately titled Fest is a response to contemporary YouTube culture, and in particular the thrill seeking subset of stunt videos. Set at a sparse block party, Diakur’s risk taking is in the animation itself, which is a combination of puppeteering and computer simulation that leaves the outcome never fully in the director’s hands.

Tomek Popakul’s short Acid Rain actually did bubble up on the Oscar longlist but remains an underseen gem. A psychedelic coming-of-age story that pairs a teen runaway with a drug dealer named Skinny, it draws inspiration from the director’s own experiences as well as the oldest of stories: forbidden fruit. Inspired visually and sonically by endless throb of rave culture, it is the short perhaps best suited to being seen on the big screen, instead of a phone propped up on your bedcovers.

There are other shorts in the collection, but the two that bring the most intriguing synopses have to be Slug Life and The Night of the Plastic Bags. The first, a UK entry from Sophie Koko Gate, is disturbingly oozy and pocked with macro views of what could be hair follicles, tiny eggs, and other bits of the natural world. Its six-and-a-half minutes are devoted to the life of Tanya, a woman with a penchant for non-human lovers. Gabriel Harel’s film, on the other hand, features two very human lovers — or at least ex-lovers. As Agathe tries to convince her ex, Marc-Antoine, to get back together, plastic bags around Marseille come to life to attack the city.